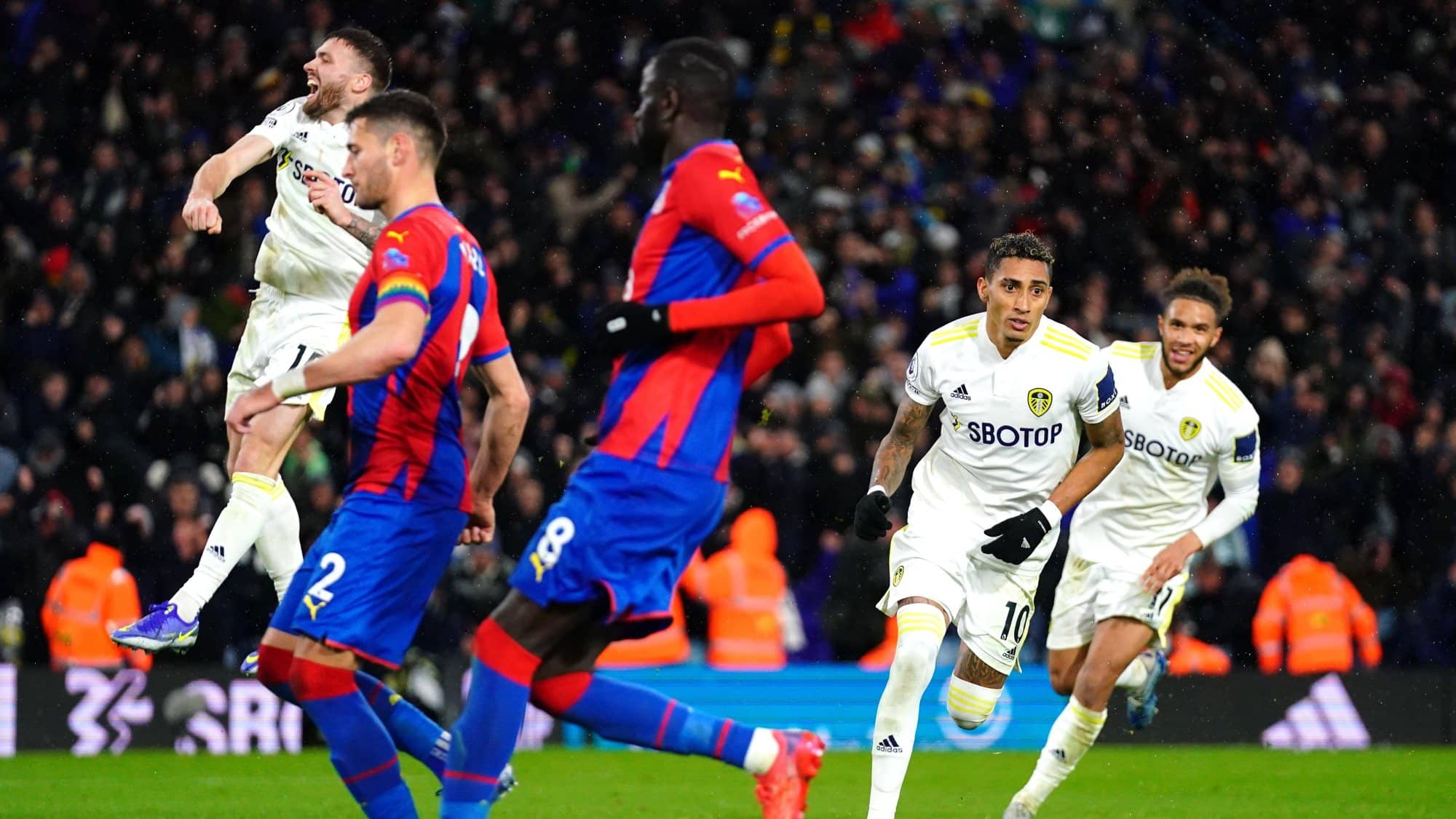 In the grips of a post-Palace comedown, I spent the early hours of Wednesday morning sitting on my bed, gormlessly scrolling through tweets and Instagram posts, resigned to the fact sleep wasn’t going to be an option for a little while longer.

Walking out of the ground immediately after the match, the feeling was more like tired relief. For 93 minutes I didn’t enjoy watching Leeds play an even more twisted version of Russian roulette with Palace, daring each other to see whose out of form striker eventually remembered to load a bullet before shooting. But then Leeds won a corner, Diego Llorente screamed at the referee, and our deadliest gunslinger was in a duel at dawn with Palace goalkeeper Vicente Guaita. A frightened hush gave way to a euphoric roar. It wasn’t until I got home that my body could process how fried my brain was feeling. Staring at social media became my safe space.

Adam Forshaw eventually stopped me scrolling, posting three photos to Instagram captioned, ‘What. A. Feeling!!’ The third captures the moment Raphinha’s penalty hit the bottom corner(ish). Rapha is already turned away from the camera, running towards the Kop. Forshaw has his arms outstretched, ready and waiting to embrace the hero, his own haggard relief etched across his face. To the left, Stuart Dallas is punching the air, jumping from out of shot and into my heart.

My initial reaction was simply, ‘I fucking love Stuart Dallas.’ Kudos to whoever took the photo, it’s brilliant, encapsulating everything that makes Dallas such a superb bloke. After Junior Firpo registered on the De Bock Scale against Brighton, I rewatched LDB’s own comedy show at Derby to see how it compared and found Gaetano Berardi on the opposite side of the defence providing a lesson in the basics of playing full-back. Perhaps Firpo was following Dallas’ lead when he came off the bench against Palace and recovered from a nervous start. Dallas was facing a tricky opponent in Wilfried Zaha, at least when Zaha wasn’t falling over or throwing a tantrum. At one point in the second half, Dallas appeared to have Zaha trapped in a corner alongside a Leeds teammate. The winger’s feet moved far too quickly for me to even try to describe the skill that fooled both Leeds defenders, allowing Zaha to escape, but the fans in the north-east corner could only groan in grumpy admiration. But Dallas never let Zaha out of his sight and wasn’t going to be tricked again, even if it meant having to tackle him with his head. It was fitting when the final whistle was blown as Dallas was once again sliding in to rob Zaha of the ball, turning his calls for a Leeds throw-in into another celebration before verbalising how we all felt by grabbing Rapha’s jaffas.

Dallas’ own slow start to the season was put into perspective when he spoke about losing a close friend, so it feels good to be reminded of how much we love our no.15, and how much he loves us in return. Look back at that photo of his penalty celebration and he’s heading straight for the limbs in the Kop, not the goalscorer. After hearing his name sung at Norwich in the first game since he spoke of the death of his friend, he posted a photo of him standing in front of the away end with his hand on his heart, captioning it, ‘A club like no other.’

But this was only a fleeting feeling, as I became distracted by something else in Forshaw’s post. High up in the West Stand, celebrating directly above James Tomkins, appears to be the head of what can only be described as a massive red bunny rabbit. I haven’t seen Donnie Darko since I was a student, and I didn’t really understand it then, but it definitely taught me that seeing visions of gigantic rabbits is probably a bad sign. Waiting for an aeroplane’s jet engine to crash through my bedroom window, I began drafting a tweet to double check I wasn’t the only person that could see it, worrying the emotional aftershock of a stoppage-time penalty had made a more disturbing impact than a burst of adrenaline ruining my sleep.

Just before pressing send on the tweet, I zoomed in on the photo and realised the figure was actually a Leeds fan in a red coat, or maybe a celebrating steward. Their head is lost among the blur of fans, and their arms raised in the air are to blame for the bunny ears. I calmed down, deleted the draft, and spent the rest of my night reading tweets from Leeds fans saying the stress of this season is going to send us all insane. ⬢