In twelve years as a defender for Sampdoria, Pietro Vierchowod earned two nicknames. His first, The Tsar, was thanks to his father, a Ukrainian soldier who fought in the Soviet Army. During the Second World War, Ivan Luchianovic was held as a prisoner of war in Italy. When the fighting stopped, he chose to settle there rather than return to the Soviet Union, paving the way for his son, first, to train as a plumber at his dad’s insistence, then to prosper in Italian football.

His second nickname, The Hulk, came courtesy of Diego Maradona. “You only miss the green colour,” Maradona told Vierchowod after being harrassed on the pitch, later describing the centre-back as, “an animal, he had muscles up to his eyebrows.” El Diego tops a long list of greats, including Marco van Basten, Gabriel Batistuta and Gary Lineker, describing Vierchowod as the meanest defender they ever faced. Throw in a couple of Scudettos, a European Cup and a place in Italy’s 1982 World Cup-winning squad, and you get the picture. Giuseppe ‘The Warrior’ Bellusci, this ain’t. 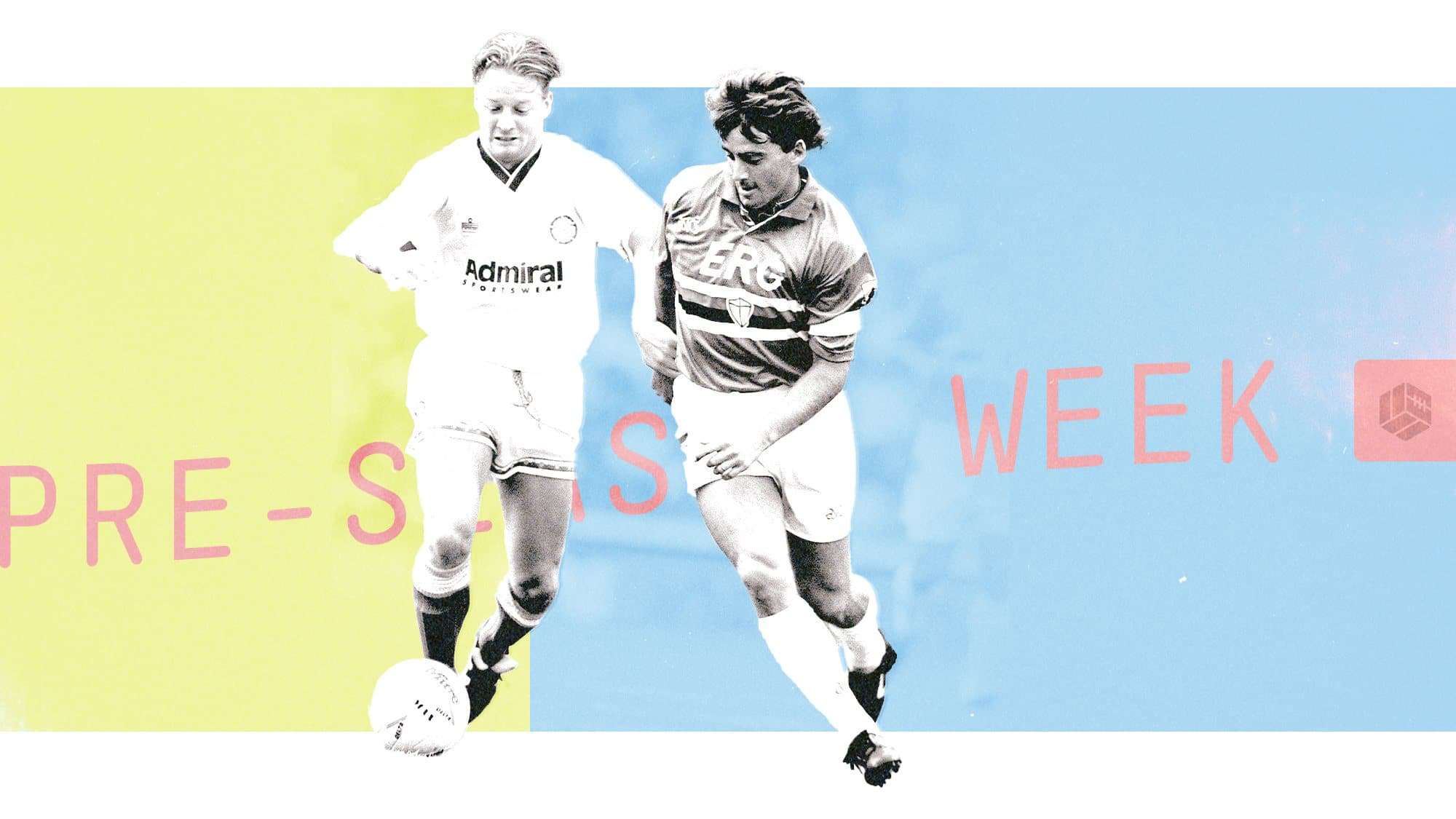 At Elland Road for the 1992 Makita Tournament with a fearsome reputation to maintain, Vierchowod had Stuart Pearce or Roy Keane to choose from in Sampdoria’s semi-final against Nottingham Forest. Instead he went for 5ft 9in Nigel Clough, the manager’s son but meek as milk. A report in Sportsweek says the duo ‘fought a running feud almost from the first whistle’, Vierchowod finally earning a late booking for an ‘assault’ on Clough. He was lucky to still be on the pitch after an ‘appalling’ tackle on Gary Crosby in the first half, completing his pantomime villainy by scoring the second goal in a 2-0 win.

His goal was a surprise to former teammate Trevor Francis, who caught the last fifteen minutes before managing Sheffield Wednesday to a 1-0 defeat to Rotherham later that day. Francis came back the next day to co-commentate on Sampdoria against Leeds United in the tournament final. Another of Francis’ former Sampdoria teammates, Liam Brady, was also around, and ITV’s Brian Moore promised, “an afternoon of classy, sophisticated football.”

Enter David Batty. Had Batty watched Vierchowod kicking lumps out of Forest the previous day and thought, ‘challenge accepted’? Or did Batty rock up for a glorified pre-season friendly on a warm summer’s day smelling mischief in the air, an opportunity to treat football with the frivolity it deserves? In a 2015 interview with Moscowhite for The City Talking, he remembered, “It was a friendly, wasn’t it? So you could do what you wanted. It was just funny.”

In the first thirty seconds, Batty stole the ball in midfield, launching a counter attack, his left forearm and right elbow taking him past the attempted blocks of Vierchowod and left-back Marco Lanna and crunching into a 50-50 tackle with England teammate Des Walker.

Still fuelled by the adrenaline of showing Nigel Clough who’s boss, Sampdoria were aggressors in the first fifteen minutes, Batty the recipient of a mutually appreciated foul by Veirchowod and a naughty lunge from left winger Ivano Bonetti. Bonetti had turned 28 the previous day, turning his nose up at a celebratory Graveley’s as Sampdoria flew their own chef to West Yorkshire for a party to mark the occasion.

The party vibes transmitted to the pitch, Roberto Mancini trying to chip John Lukic and Bonetti going close with an overhead kick. But the mask slipped when Atillio Lombardo, minutes after being floored by his own captain, Mancini, reacted angrily to a sliding tackle from behind by Tony Dorigo. Brian Moore suggested it was a tackle that “can rip an achilles tendon away”. Trevor Francis was less worried: “I take the point, but I don’t like to see Italian players like Mancini and Lombardo asking the referee to get his yellow card out.”

It was all the encouragement Howard Wilkinson’s wrecking crew needed. Sampdoria liked to dish it out, but they didn’t like to take it. An innocent trip by Batty was enough to rouse the crowd, and a firmer challenge on Mauro Bertarelli seconds later was enough to agitate Mancini. A nonplussed Batty was soon swatting away two pushes and the most Italian of finger and thumb gestures from Mancini and his friends, and replying with some ‘settle down’ gestures of his own that would irritate anybody.

Francis and Brady knew how Batty was feeling. A young Mancini had picked fights with both of them, feeling his authority in the side was under threat when they signed for Sampdoria in the 1980s. By 1992 Mancini had a say in the club’s transfer business and managerial appointments, now “almost a son to the president, Paolo Mantovani,” as David Platt puts it in his autobiography. Mancini should have had a word with Wilkinson beforehand and found out what Batty thought of authority figures if he wanted a peaceful afternoon.

Wherever Mancini now went, Batty followed. Even when the no.10 jogged to take a corner, Batty was joining him to form a one-man wall. Vierchowod was finding Lee Chapman harder to bully than Nigel Clough, so Mancini had to stick up for himself. He wasn’t very good at it. Trying to kick Gary McAllister, Mancini fell over, and Macca had to lift him off the floor and dust him down as if saying, ‘Have another go.’

Just as the match threatened to calm down, David Batty provided two of the great David Batty moments. First, his face of pure innocence at the precise moment Lanna emerged from behind the advertising hoardings, furious after being nudged into the stands. Then his wink to McAllister after calmly sidestepping Lanna’s attempted retribution, leaving the full-back on the floor with Leeds men stepping over and around him, like a lagered-up lad discovering he’s no match for the heavies on the nightclub door.

After Lanna’s airborne adventure, referee Joe Worrall went to the bench, asking if Batty could be substituted for the general peace and an easier day. Wilkinson, watching from the stands, arrived at the touchline in a fury, putting an end to that idea. In commentary, Francis completely misread the moment, bizarrely suggesting Wilko was asking Worrall to send his midfielder off.

Wilkinson put that right in the post-match press conference. “The ref wanted Batty taken off. He felt he had been upsetting one or two people and that the game would be easier to control without him around. It is my view that is exactly what Batty is paid for.” Even new Sampdoria boss Sven Goran Eriksson concurred. “There were several situations involving Batty but my players weren’t angels either. I told them at half-time that Batty was an aggressive player who would challenge hard and that they shouldn’t expect any less — maybe I should have warned them before the start.”

In the aftermath of the two incidents, Sampdoria scored the only goal of the game. Whatever.

It is at this point the original YouTube highlights end, Batty’s afternoon already cemented in folklore. But more footage has turned up, showing his delightful antagonism continuing into the second half, when after half an hour of relative calm, he went into two aerial challenges in quick succession with two elbows raised just enough to fell his opponents and prompt yet another explosion. While two Sampdoria players tried strangling Batty, Mancini went and got the ball, so he could bounce it off the back of Batty’s head. Batty had no time for hand gestures now and kept his message nice and simple: “Fuck orrrfffff,” before gently leading the referee away by his arm while the two sets of players squared up to one another.

Batty and Mancini were finally booked, leaving the rest of the Leeds team to take up the mantle. Mancini was soon on the floor being yelled at by Gary Speed, who was oozing champion cool, wearing the no.11 shirt as a makeshift centre-back,. Then Steve Hodge was hurling the ball into a Sampdoria player’s chest from a yard away after being denied a throw-in.

The introduction of Eric Cantona helped Leeds assume the ascendency, Eriksson replacing a striker with a defender to help Vierchowod deal with Chapman, Cantona and Rod Wallace. The Peacocks failed to find an equaliser but, whatever. Mancini was wound up right to the end, reacting to a pat on the head from Chris Whyte like a declaration of war, but nobody from Leeds thought a friendly was worth all this stress.

Fittingly, Batty was having a last touch of the ball when Worrall blew the final whistle, ending Mancini and co’s afternoon of misery. Who knows, perhaps that day is still a vague footnote in Mancini’s assessment of his own career, proud of emerging from the Yorkshire trenches with the Makita Trophy in his possession. Or maybe he wakes at night in cold sweats, happy dreams about the night his Italy side beat the Yorkshire Pirlo in the Euro 2020 final merging in his subconscious with a nightmare afternoon, long ago, up against the Czar of Chapel Allerton. ◉