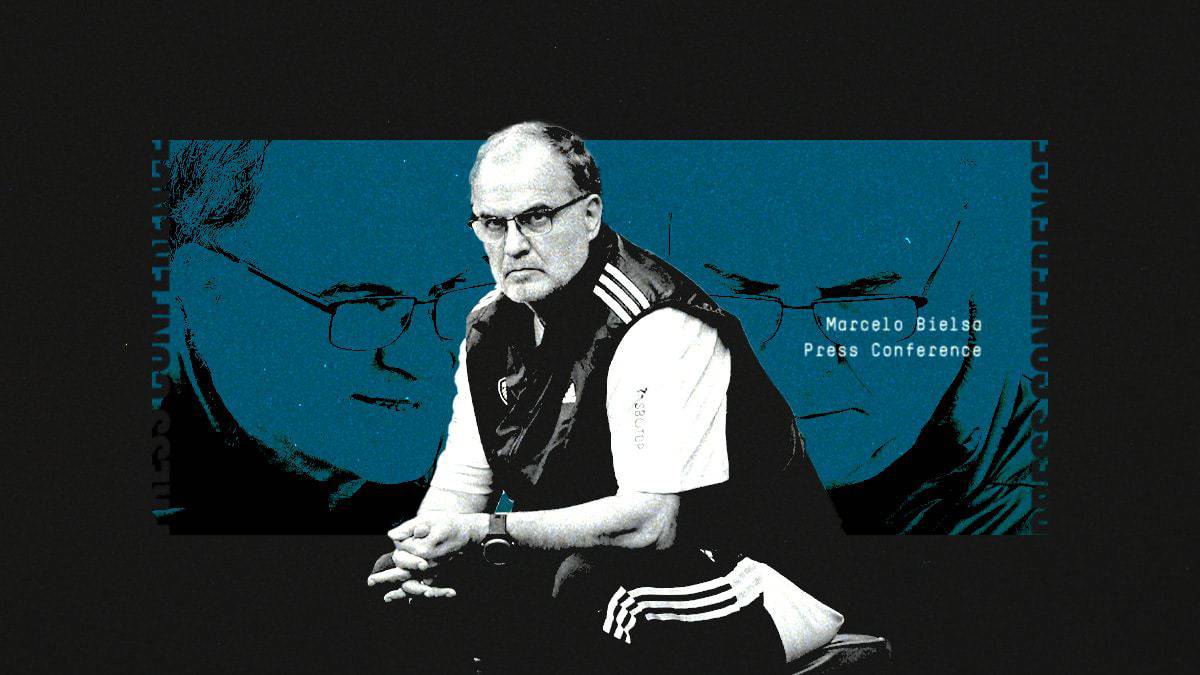 Marcelo Bielsa’s press conferences get earlier and earlier. 8.15am! I wonder if he’s trying to sort the morning people from the slugabeds among the assembling press? I wonder if, these being Zoom affairs nowadays, any dare dial in from bed with their sleeping caps on and their webcams off? We’ll come back to the press in a minute, anyway.

First, what everybody wants to know: Pat Bamford and Luke Ayling will not be playing (nor Robin Koch). Not playing for the Under-23s, that is! Psyche, got you. “In principle, no,” Bielsa said about them lining up for the Jacko Generation against Leicester U23s tonight. What about against Brentford on Sunday, though?

“It’s likely that they’ll be available for the game on Sunday.”

Bamford and Ayling, that is, not Robin Koch. But that’s great news! Pascal Struijk should also be available, despite leaving the Palace game at half-time — he’s knocked his hip but “we think he will be available.” As to whether being ‘available’ translates to ‘starting’, for Bamford in particular, fantasy managers will still have to give this situation some thought:

“To be available and healthy is the first step for a player who has been without competition for two months. Nobody, just through their presence, guarantees their performance … they can be fit but the adaptation to the competition is something different. Sometimes that process is accelerated or it takes longer considering the particularities of each player. Also sometimes the needs of the team.”

Being fit doesn’t guarantee Bamford being ready to start Premier League games and reach his old levels, but maybe the team will need him to start anyway — “I can’t offer you a precise conclusion.”

The other main question was about the ‘rift’ with Kalvin Phillips, that Kalvin already dismissed in midweek. That interview was fun because even while Kalvin tried to put on his sternest ‘I am putting these scurrilous rumours to bed’ serious voice, he couldn’t help smiling adorbly because that’s just the way he is. “I will play any position the manager asks me,” Phillips said. “If he wants me to play centre-back I will play centre-back, if he wants me to play goalkeeper I’ll play goalkeeper. I respect him so much I will never fall out with him.”

Rather than adorbs smiling, Bielsa opted for his usual staring-at-table-top tactic, but his answer about the situation was just as good, including the very obvious but needs saying:

“It’s difficult to express yourself over things that didn’t happen, that there’s nothing behind and that they are expressed as a reality.”

That’s the crucial part right there. Why on earth were Phillips and Bielsa being asked about this, anyway? Because Leeds were on the Sky game on Sunday and Jamie Redknapp pulled an invented situation out of his backside just to fill the time before he could pick up his pay and go home. The objective of the media, says Bielsa:

“It’s to get attention with any type of resource. The press, not only do they inform, but they have their legitimate need that what they tell wakes up interest, and in that process, on occasion, it happens that they invent realities to bring attention.”

Sky are a subscription channel, and newspapers need eyeballs on their adverts, so they need to attract attention to themselves so people will buy subscriptions and look at their adverts, and they need to do it anyway, anyhow, even if that means making stuff up. And now here we are. (And don’t forget that if you want to subscribe to a blog with a very good clean website that isn’t covered in adverts and clickbait a TSB+ subscription gets you all that, a digital magazine and some very great ad-free podcasts too, thanks very much in advance for subscribing.)

England isn’t as bad for “sensationalism” in the press as some other countries, says Bielsa, and the reason for that makes this particular story even more ridiculous. The Premier League is so exciting and great, he says, why would you need to make up stories to create fake sensations when the real thing will enthral?

“I think in England from my point of view, it’s less than elsewhere, normally that’s because the material they work with is precious. Because very few leagues have so much to say about them as something as precious as the Premier League.”

Even when that Premier League has Brentford in it. “Not one of the most prestigious clubs in the league,” said Bielsa, and I expect that’ll be getting wrenched out of context on a few clickbait websites down… down west? Up west? Wherever Brentford is. Anyway, he was saying this as a compliment to their style of play so it’s fine:

“So far Brentford have shown to be a different team in the Premier League. The most novel thing I’ve seen is the amount of elements that they attack with. And the management they have of the ball in all the sectors of the pitch … they attack with six players and they always want to keep the ball. That’s not common in any league and even more so when that team is not one of the most prestigious clubs in the league.”

Bielsa hasn’t decided yet whether Leeds will play with two or three centre-backs for the game, so that immediately shut down a question about Phillips and Adam Forshaw’s merits in various different positions. He says he didn’t see Arsenal scoring while David De Gea was having his lie down last night either, so that was the end of another question. The last answer of note was instead something of a retread of his old Plan B lectures, when he was asked if it’s important for players to have a coach who sticks with principles that have worked for them before, even if they’re not working now. Choose a style of play and stick with it, is Bielsa’s advice. The idea of tearing up your philosophy, “this option of the Plan B,” said Bielsa, “From my point of view, that’s caused a lot of damage to football in general.”

It doesn’t matter what your style is, stick to it:

“The way in which a team chooses to compete, it’s a decision that has to be respected a lot, because to construct it takes a long time. To not maintain your philosophy of play, and abandon the main themes that sustain it, that’s easy. But what’s difficult is to construct a new philosophy to substitute it and know that it resolves the next game.”

The conclusion to these thoughts is such classic Bielsa that, forgive me Andres, I had to double-check the translation (computers are ace) to be sure he hadn’t thrown in an extra ‘not’. Once confirmed, though, it isn’t surprising, given who is saying it: that if you get something you do not deserve, you are on the wrong path, even though you won:

What’s really significant is what you obtain or what you deserve. Because if what’s deserved is not obtained, the path is the correct one, and if what’s obtained is not deserved, the path is not the right one. And in both cases time verifies those things — and the only thing I’m saying is that what corresponds is to deserve what you get.

But not to get what you don’t deserve! ⬢