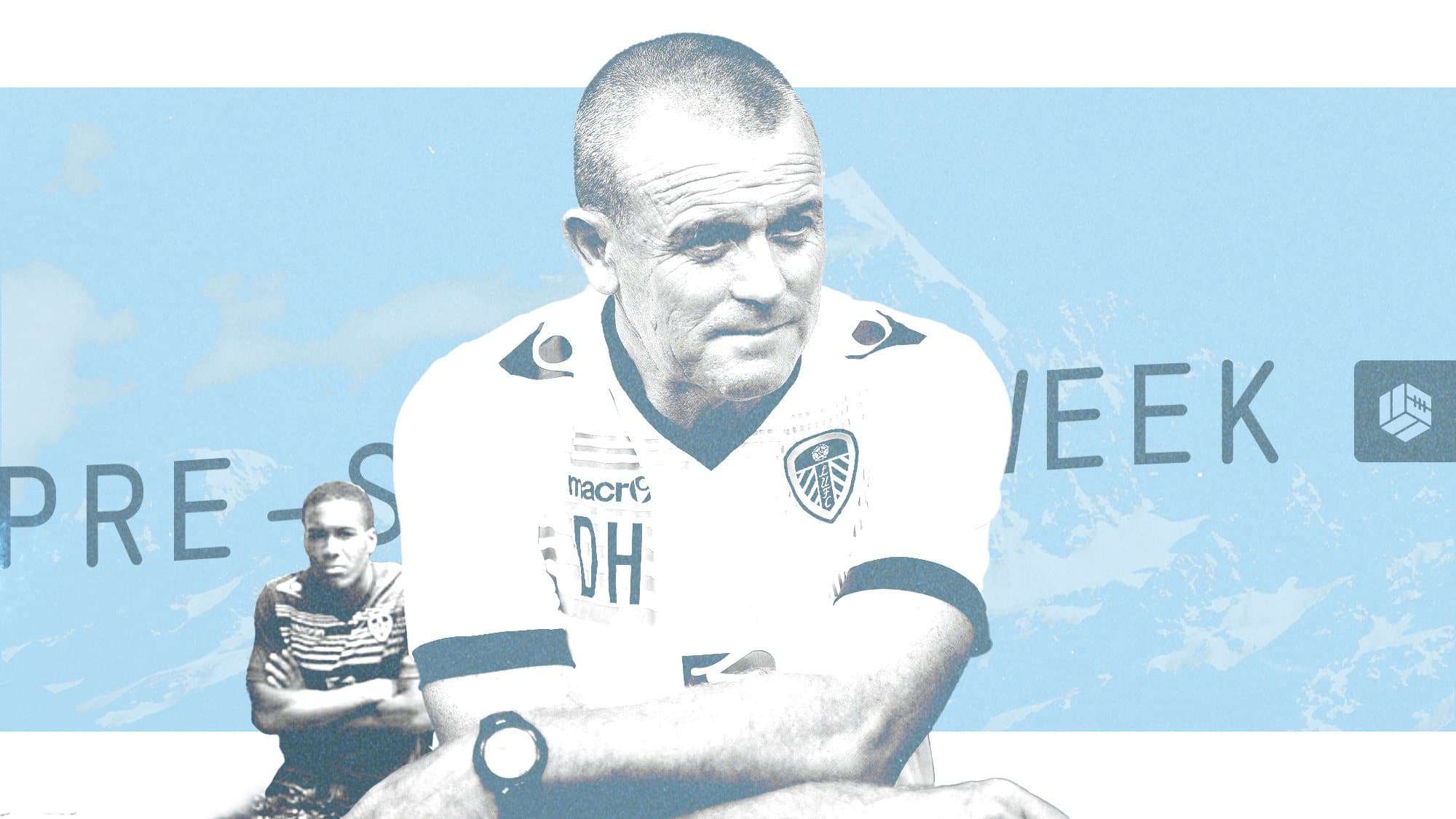 It doesn’t take long for Dom Poleon to work out why I want to interview him. “Ahhh, do you mean this one?” he asks, when I mention the trip to Italy in 2014, folding his arms and frowning like in the photo of him miserably sitting in a stream, summing up the mood of a club and fanbase experiencing their first summer of being Cellino’d.

“That river was cold as hell, man!” says Dom. “After every training session you had to go down and do a certain amount of time in the river. I remember thinking, ‘This is so cold!’ And it wasn’t like you could get in and get out, you had to do whatever the time was. I got caught looking like, just hurry up and get this over with.

“It pops up still. It’s just a funny photo, innit? I don’t look happy. It was more the online [reaction]. For us, there were others dreading it as well. I happened to get snapped, but they could relate. Everyone was going through the same similar thing.”

Other memories of the pre-season trip to the Dolomites are less forthcoming for Poleon. “Who was the manager then?” he asks me. Dave Hockaday, Dom. Both of us try not to wince.

Poleon can be excused for needing a reminder. Elland Road was a revolving door of managers, coaches and players. Not all officially arrived; plenty of others were scared off. None of the arrivals were as baffling as Hockaday, who never stood a chance as manager but made things worse with supporters by trying to bluff it and pretend he was deserving of the opportunity, despite a CV of failure with non-league Forest Green suggesting otherwise. Clearly, the Hock failed to get the memo that first impressions count.

“When I think of Dave Hockaday, I don’t really like him,” Poleon says. “I didn’t get on with him. I remember he gave some crazy speech. There’s a kid’s Disney film called The Croods about a caveman family. In one of his first speeches he brought up this movie and everyone was just looking around thinking, ‘What is this?’ He’s saying we’re going to be like a family and all this stuff.”

Poleon was still a young player, able to ignore the distractions of constant upheaval by being in a “bubble” of focusing on his own game and trying to establish himself as a first team player at Leeds. He’s unable to say whether his opinion of Hockaday was shared by the more senior players, but leaves it at: “I thought he was a little bit strange.”

He was at least in Italy knowing a place in the side had become vacant. On the day Leeds flew, Massimo Cellino once again made headlines by suggesting Ross McCormack was refusing to travel, to force a transfer. A week earlier, Cellino had insisted McCormack, who almost single-handedly kept Leeds in the Championship the previous season, was not for sale. Now Cellino was adamant McCormack’s actions were forcing him to sell to Fulham for £11m. In reality, McCormack had been told not to train with Leeds for fear of an injury potentially scuppering the deal. When Poleon and the rest of the squad were flying to Italy, McCormack was already in Fulham undergoing his medical.

You would normally say a striker scoring twice in pre-season is an encouraging omen for their chances in the first team, but Poleon’s brace in United’s first friendly in Italy was undermined by the standard of opposition. Local amateurs FC Gherdeina were beaten 16-0, Matt Smith scoring a double hat-trick and Noel Hunt and Steve Morison contributing five other goals between them, an event ranking just below trees filling with blood among the signs before Doomsday. Gherdeina had actually won their previous fixture 17-0, albeit against a team with just one point and a goal difference of -128.

Cellino had already told Hockaday he couldn’t select second-highest earner Paddy Kenny, leaving the goalkeeper at home because he was born on May 17th, Cellino’s unlucky number. And as Leeds fans were joking that they wouldn’t be allowed to score again to make it 17-0, United’s new ‘keeper Marco Silvestri was switching ends to play the final few minutes for Gherdeina and keep the score down.

Leeds’ team contained trialist Andre Blackman, looking for the eleventh club of his career at the age of 24 after spending the previous season in the Conference South with Dover and Maidenhead. Blackman eventually opted for the only football club making Leeds look well run, Blackpool. There he made three appearances, getting subbed off after just seventeen minutes against Leeds in the last of those, before being charged with theft after admitting to shoplifting a jacket from Harrods.

Hockaday was upbeat after such a resounding win. “I saw a lot of lights being switched on. I saw a lot of young men gaining confidence. The scoreline is irrelevant.”

Poleon, twenty at the time, remembers feeling differently. “It’s supposed to be work. You’re supposed to play someone a bit better than yourselves, or not as good to work on things. When you beat a team 16-0, it’s not pointless, but…”

To Gherdeina’s credit, they at least turned up, unlike Leeds’ next scheduled opponents, FC Viitorul Constanta. The Romanian side, founded by Gheorge Hagi, cancelled on the day of the game, realising a bit too late that it was taking place 1,000km away. “It would have been an ordeal for the players,” said general manager Narcis Raducan.

Leeds released a statement reassuring fans who had travelled that they had ‘acted quickly and will now play a Leeds XI against a Leeds XI’ as the trip went full Mike Bassett. Morison and Hunt were on the scoresheet again as Leeds beat Leeds 3-1. Morison no doubt counts those among his tally of Leeds goals, alongside the ones he scored on loan at Millwall and kept talking about.

Again, Poleon struggles to remember any specifics, almost as if he’s tried his best to forget. “You still take it seriously,” he says. “If anything it would have been harder than whoever was about to turn up. For the timing, playing against each other in pre-season, that’s obviously a bit bizarre.”

If Poleon hoped that the drama would stop upon his return to England, he was wrong. Yet again, he was left baffled by Hockaday, who was accusing him of running away from a taxi without paying.

“I think he asked me to pay. I was like, ‘I live in the city centre, why would I take a cab? I drove to the game.’ It was ridiculous, I remember thinking it was a joke. He was being deadly serious, I think he was trying to fine me or something. I didn’t like his approach. He didn’t ask me.

“I was so flabbergasted. He took a while to process that I was telling the truth. That was it for me. After he treated me with a little bit of disrespect in that situation I didn’t have any time for him.”

Hockaday was not Poleon’s problem for much longer. He had agreed a new contract with the club and expected to be sent on loan to Oldham. Then the contract was pulled. Just over an hour after Leeds’ Twitter account urged fans, ‘Don’t go to bed just yet,’ on deadline day, they were confirming Poleon’s permanent departure to Boundary Park. It came seven minutes after Matt Smith was sold to Fulham, only a couple of weeks after he had signed a new three-year deal and been handed the no.9 shirt.

At the time, Poleon told the Yorkshire Evening Post, “I’m confused about what went on and I’m disappointed. If I’d annoyed Cellino then fine but we had a contract agreed last week. I was told that he liked me, that he rated me and that he thought I had talent but it’s hard to take that seriously now. How can he think a lot of me and then act like he did? It doesn’t make sense.”

Seven years on, Poleon, now playing for Ebbsfleet, remains none the wiser. He still seems pained to talk about his exit, letting out a big sigh: “I guess everything happens for a reason. That was a strange one.”

But Poleon still speaks only positively about his time at Leeds, about the care and help of Lucy Ward and Neil Redfearn, the bus journeys with Kalvin Phillips, Alex Mowatt and Sam Byram, the warmth of the supporters. It was a time when his happiness off the pitch was matched by his achievements on it: breaking into the first team, making his debut, scoring at Elland Road.

Just don’t mention that lake in Italy, or you’ll be immediately met with a scowl. ⬢