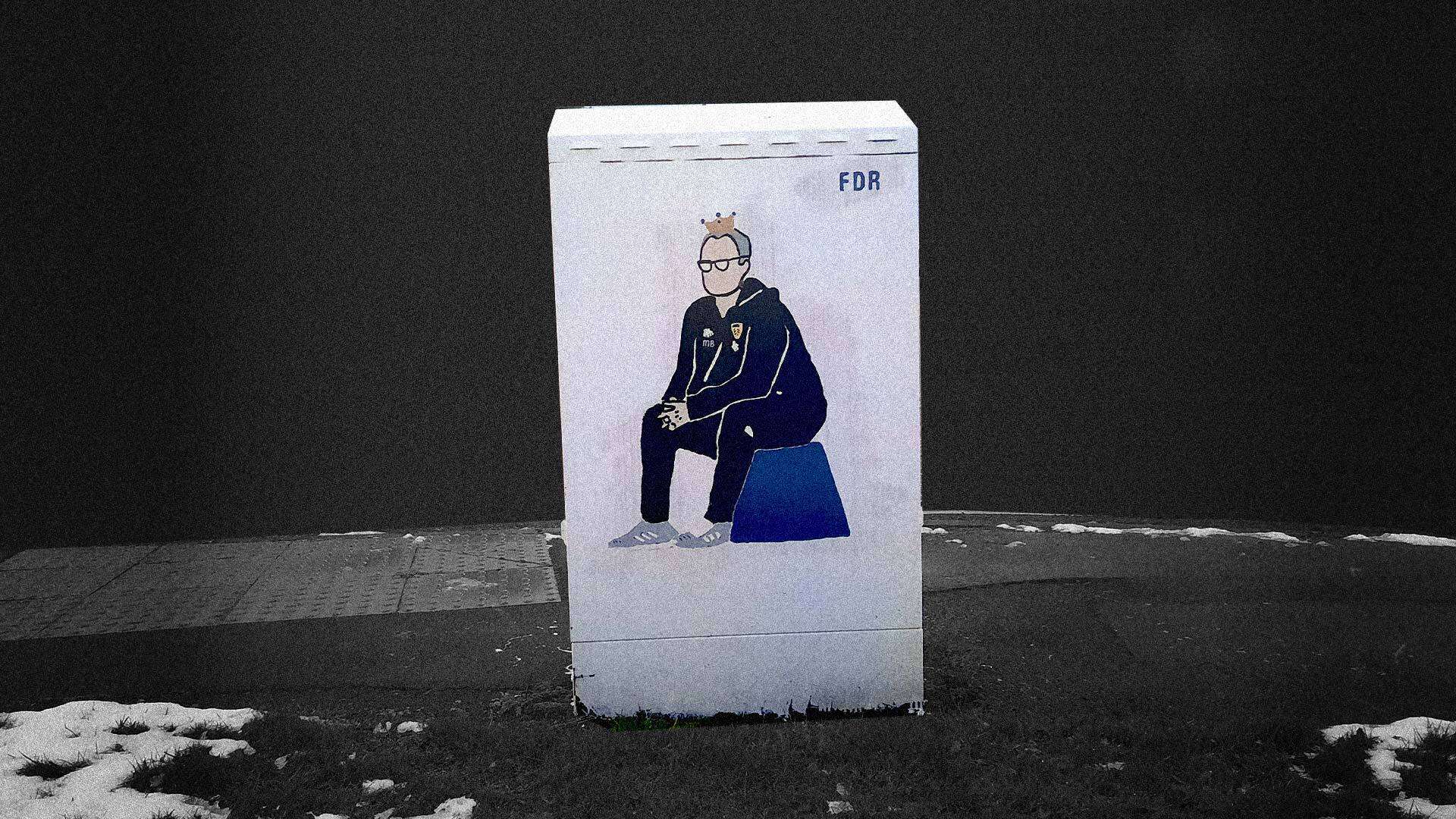 The King of Leeds lives on my street, right at the top of the hill. His throne is a blue bucket. A gilded crown rests on his head. Everything the light touches is his kingdom, all the way to the SPAR Euro Garage on Otley Road and beyond. He sees all, and judges it.

He moved in about eighteen months ago, when the Covid pandemic paused our promotion season. My mum, who doesn’t really like football, knocked on my window and told me there was a man outside painting a picture of Beyonce onto an electricity box. Confused, I went out to investigate and found Andy McVeigh, the Burley Banksy, putting the finishing touches to his masterpiece. So now I’ve got Marcelo Bielsa for a neighbour, sort of. And, just like its subject, the Adel Bielsa is changing my life for the better.

I say that because I’ve hit a point in my life where change is the only option. I haven’t taken care of myself for a while. Someone really ought to let prospective parents know that having children makes you perpetually busy and messes with your mind and body. If the cartoon ponies don’t get you, the sugar will.

October is a particularly bad month for self-care because it’s dark and rainy and you end up buying three times the normal quantity of sweets to prevent your house from being egged by sugar-crazed midgets. In short, you let yourself go. And so it came to pass that I got on the scales the day after Halloween, swore quite loudly and bounced straight off them again. If cursing could burn calories I’d have hit my goal weight within thirty seconds. But it doesn’t, so I didn’t.

A few months previously, in a short-lived fit of self-improvement, I’d purchased some running shoes. I used them three times, then chucked them into a cupboard because I don’t like running. It brings back loathed memories of school cross-country, which involved being chased through muddy woodland by an angry Scouser. Yet there I was, digging through that cupboard for those shoes, because something had to change.

Outside it was cold and dark. I’d made up my mind to start small — a gentle jog up the hill, then the long downhill stretch curving down to the local shop, then turn around and come back. Easy. I set off at a pace that Pierre-Michel Lasogga would have considered unchallenging.

At the top of the hill I met Bielsa, sitting in a cloud of freezing fog. Something about that picture radiates judgement. Its facial features have been left blank, emphasising the glasses and the unseen eyes behind them. In sight of Bielsa I became newly conscious that I wasn’t exactly murderball fit.

Right after I reached the shop and turned for home I realised I was in trouble. I’d been running downhill for a good few minutes without a thought to the return journey. From the bottom looking up, the slope began assuming the proportions of a Swiss mountain. Soon I was huffing along asthmatically, while my legs began notifying me that if I didn’t stop this silliness right now they were going to start making life very unpleasant.

At length, I struggled back to the top of the hill. I felt Bielsa’s eyes on my back and imagined his voice screaming at me to keep going. Somehow it was enough to get me up and over the summit, after which I staggered drunkenly to my house, showered, angrily ate some pasta and then collapsed into bed, vowing never to do anything so stupid ever again.

I didn’t go out the next day because my legs hurt. I wish I had a better excuse. A day later they still hurt, plus it was drizzling a bit, so there was no way I was going out in that.

The day after that, something changed. I thought about those first few days of the Bielsa era, when none of our players had the slightest idea of the possibilities this man could open up for them. He believed they could be better, even when no-one else did. I wanted to be better, too.

I dug out my running shoes again. Bielsa was on the hill, rain lashing against his inscrutable features. I passed him (‘¡Very good, David!’), continued down the slope and then fought my way back up it (‘¡Again!’). My legs made it clear that they were going to put in a strongly worded grievance the next day, but I didn’t care.

I haven’t stopped since. I have a daily appointment to see Marcelo Bielsa, and it must be kept. No matter how windy or frosty it gets, he’s out there in that same spot, so I need to be there too. He’s my anchor.

It’s working. I’m half a stone lighter and feeling healthier than I have done in years. I’m still running the same little circuit, but now I’m attacking it rather than merely trying to survive it. He’s always there, constantly pushing me. It’s like having a personal trainer on call. I can’t even get a takeaway because he’s up there, scanning the street for Deliveroo drivers.

Bielsa changes lives. For Luke Ayling, for Stuart Dallas, for Kalvin Phillips and more, he was the lightning strike that brought their potential to life. The Adel Bielsa stands as a monument to their success. I don’t suppose there’s much chance of the man himself reading this, but I hope he’d be happy to know that a simple image on a battered old fuse box has helped me when I needed help.

Credit must, of course, also go to the Burley Banksy, for bringing Bielsa to my local area — it’s appreciated, despite the attitude of a grumpy minority. If Andy ever gets the urge to create a twelve foot mural of Vinnie Jones I’d be happy to suggest a few locations where all my neighbours can see and appreciate it.

I’ve written this because I want to hold myself to account, and to prove that lasting change is possible. It’s a special kind of madness that gets you out of bed at 5:30 on a Saturday morning and propels you through deserted, snowy streets, all to impress the painted image of a man you’ll never meet. Madness is the only word that seems even halfway appropriate.

Madness is also taking a job seven thousand miles away at a cursed club, believing you can succeed where the last fourteen managers failed. Madness brought Liam Cooper to the FIFA Awards and Kalvin Phillips to the Euro 2020 final. Madness brought the King of Leeds to my street.

I hope this madness sticks around a little longer. I hope he does, too. ⬢