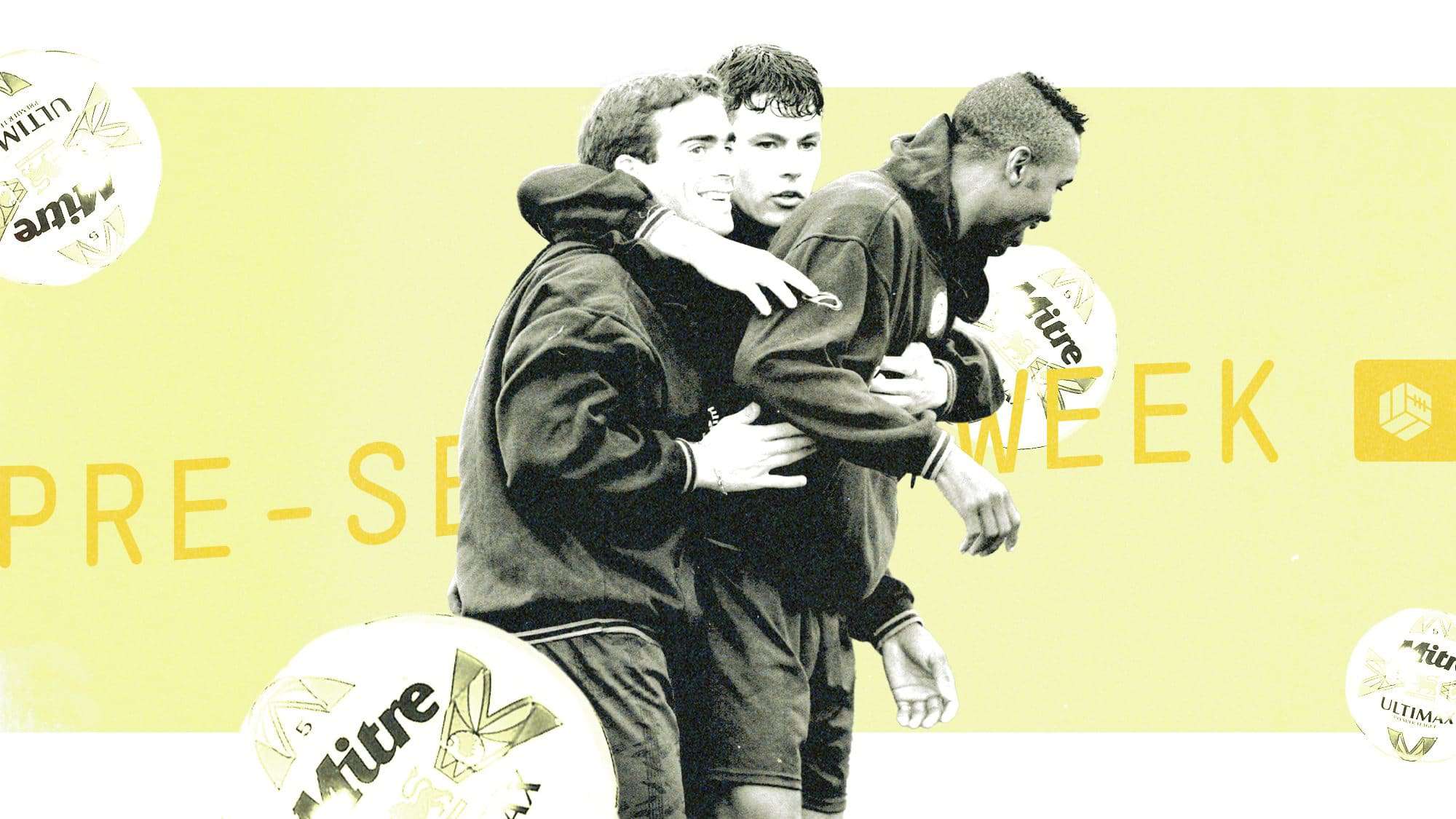 Why would George Graham’s Leeds United tour of Sweden in July 1998 make headlines around the world? New signing Clyde Wijnhard wasn’t even playing, groin strains taking him and Lee Sharpe home early to Leeds, so it wasn’t about him.

I doubt even Graham was all that interested, not when there was a bonfire of speculation about the Spurs job for him to stoke and enjoy. Spring-to-autumn ’98 was the third phase of Graham’s time at Leeds. After the dour defending of his first season, then spending big and getting lucky with Hasselbaink for fun and games in his second, this was the denouement, when only Wijnhard and Danny Granville arrived in summer and Graham got a bit bored and fancied working in London again, where he still lived, with a bigger transfer budget.

The worldwide news was not really about Leeds United anyway, but Harold Kewell, although more interesting things were going on than that. But Australian newspapers were communicating horror to their readers after United’s first pre-season game, against Lysekils FF: a bad tackle on the Socceroos’ star led to him being stretchered from the pitch, after only 27 minutes, with damaged ankle ligaments. He was given crutches to hobble about on, x-rays at a local hospital to determine the ligaments weren’t torn, and a flight back to Leeds for specialist treatment.

“He will be out for two or three weeks,” Graham reported to a fretful Aussie press, “but we expect him to be fit again for our final pre-season match against Stoke on August 4th.” And so he was, and for the 0-0 draw at Middlesbrough on opening day, but perhaps this wasn’t the end of the saga of Kewell’s ankles, but the start. Some web biographies note this was the first of many, many ankle injuries, and groin and hamstring injuries caused by his ankle injuries, that plagued Kewell’s later career. I wonder if we could track down his mysterious assailant, and shake him by the hand.

Anyway, whatever about Harold Kewell. The real story here was the game. Bruno Ribeiro replaced him, but by half-time Leeds were losing to a Lucas Radebe own goal. More changes followed at the break, including Ian Harte on for the £1.6m new boy from Chelsea with the comedy name, Danny Granville.

George Graham always had a bit of an odd thing going on with Ian Harte. The young left-back was fast-tracked from the youth team to the Premier League around the time of the League Cup final defeat in 1996, when Howard Wilkinson was trying to persuade fans there were better times ahead. Graham kept him as understudy to Tony Dorigo, then replaced Dorigo with David Robertson from Rangers, who was awful. Harte could be the answer, but now here was Granville, an England Under-21 player not coming cheap, putting Harte on the bench again.

This might be unprecedented. I’ve never heard of anything like it. It’s also upside down, because once Harte was old enough to be allowed to take free-kicks in the Premier League, he turned out to be brilliant at them, crashing shots into the net and delivering swooping crosses for other heads. Never four in a game, though. I wondered if the pecking order in this match might be down to placement, but both Harte and Ribeiro were left footed, so it must have just been how things were. Only Ribeiro and Harte had much set-piece skill in the line-up, and Bruno was taking them on himself, leaving Ian to head them in. Four times. Four!

And two in two minutes, too. When Harte and Ribeiro completed their hat-trick two minutes after making it a brace — and yes, I’m letting them share this — was Lysekils’ manager tearing his hair out on the sidelines at this never been seen feat of three identical set-pieces? And what about fifteen minutes later when there was a fourth? The coach in question, Olof Engelbrektsson, has faded from the internet, but he is recorded on one archived Angelfire fan site for once saying, “It is better to play 0-0 than to lose 6-5.” I don’t know whether he said that before or after meeting Harte & Ribeiro. And Derek Lilley. Or even Gunnar Halle. “Gunnar Halle could have had a hat-trick,” said George Graham, deepening the weirdness. The goalkeeper might have had some thoughts too, but the Lysekils squad list for the game is numbered 2-22 so I’m not even sure they had one (and the Henrik Larsson wearing 12 wasn’t ‘that’ one).

Ribeiro and Harte had a good time in Sweden. Three days later Bruno scored both in a 2-1 win over Gallstad, and two days after that Ian scored a penalty in a 1-1 draw with GAIS. Three games, eight goals, all scored by them two except one by Lilley. Harte wasn’t done, either: two years later, in July 2000, Leeds were at Lysekils again, and Harte was scoring again: no Ribeiro to help him, he’d gone to Sheffield United, but he might have been glad to hear about his old pal scoring two penalties at their happy place in the opening nineteen minutes. Then Harte handed over to Mark Viduka to get a hat-trick in his first Leeds game, while Michael Bridges and Alan Smith added one each for a 7-1 win, Lysekils’ one coming in the last minute.

Lysekils FF were formed by a group of athletes in a patisserie in 1921. The town is known for artist Nathalie Djurberg, Ace of Base songwriter Jonas ‘Joker’ Berggren, and a cast-iron urinal called the ‘piss cure’ installed in 1926 for fishermen at the north harbour, that is designated as a listed monument but has been in storage since 2008. FF struggled for precedence and even for the right to a pitch in the small coastal town, and came to a technical close after merging with Slättens IK in 2015 to form Lysekils AIK. Their stadium, Gullmarsvallen, still claims to be ‘the most beautiful football field in Sweden’, and it’s hard to argue with that, especially when you can go there and, against the rough coastline, soaring gulls, and the aroma of herrings and piss, imagine Ian Harte scoring four headers from four Bruno Ribeiro free-kicks. ⬢