How the other (wing) half lives 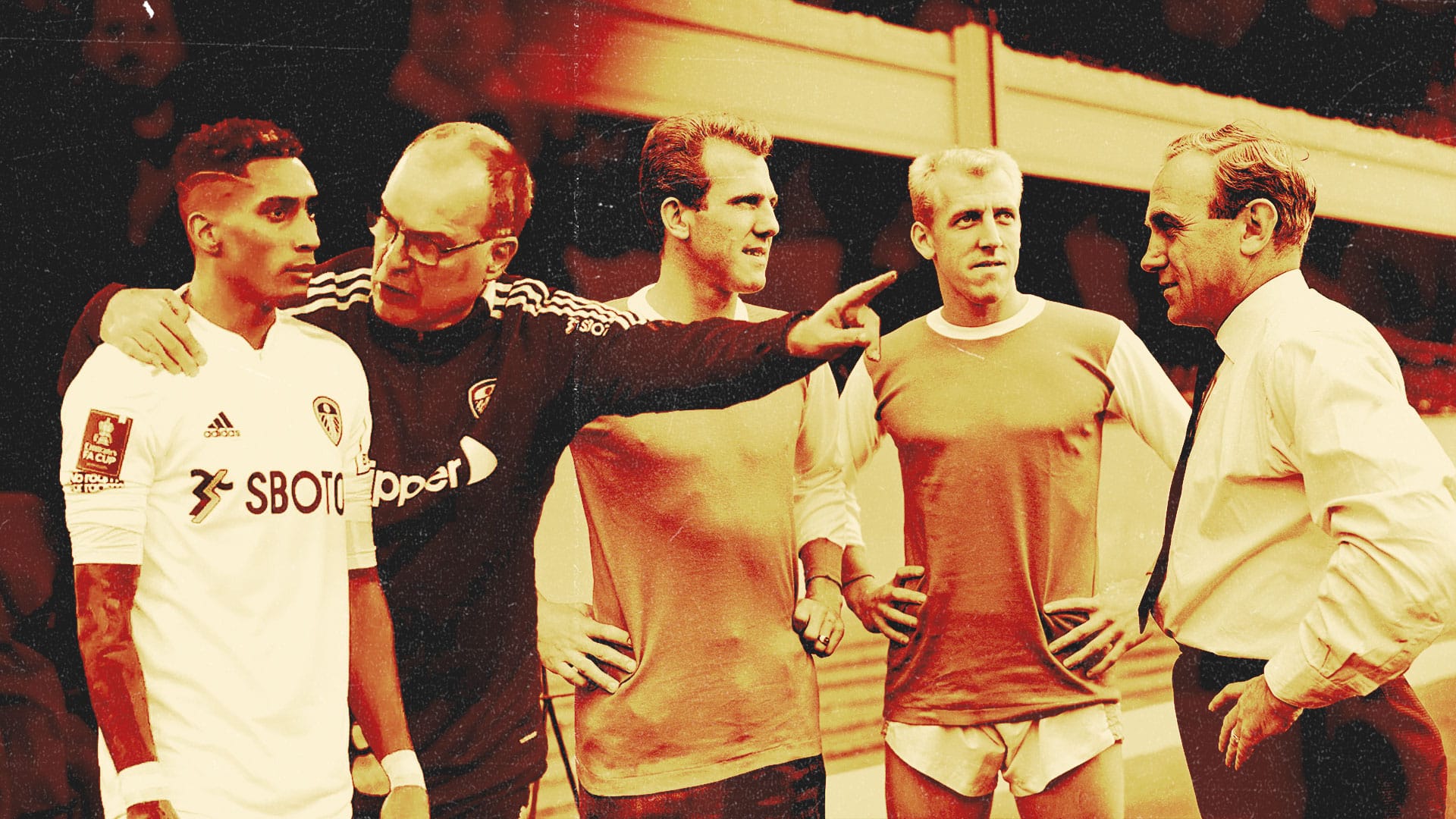 Standing on the terrace, Miller was confused about what Wright was trying to achieve. Arsenal’s defence desperately needed tightening up — they had conceded 48 goals in their opening 21 First Division fixtures — yet Scotland centre-half Ian Ure was playing up front, and scoring a goal. Ure wasn’t the only player out of position. George Eastham, an inside left for England, was playing at wing-half, and Ireland full-back Billy McCullough was lining up as a winger.

We have all been Harry Miller at some point

As a player, Wright became the first person in the world to win 100 caps at international level, and captained England at three World Cups. An illustrious playing career did not insulate him from the idiosyncrasies of management. Wright spent his entire club career with Wolves, where he was signed in 1939 by future Leeds United manager Major Frank Buckley, famous for trying to improve performances on the pitch by injecting his players with a serum supposedly derived from monkey glands and encouraging ballroom dancing lessons to improve their balance. Explaining his own attempts to revive Arsenal’s form, Wright said: “I’m giving my players the chance to appreciate each other’s problems.” When McCullough was moaning about not getting the ball on the wing, Wright showed an authoritarian streak Buckley would have been proud of. “Now you know how our wingers feel,” he said. “Don’t you think they’ve got a right to complain?” After his half hour at wing-half, Eastham’s protest was more straightforward: “This is hard work.” Regardless, Wright was ‘highly satisfied’ with the session. “It worked very well,” he told Miller from the Mirror. Wright knew the benefits of switching positions. After being written off as too small by Buckley while on trial, his impressive leap convinced trainer Jack Davies to offer Wright a place on the ground staff, keeping him at the club so he could be converted from a winger to a centre-half to a Wolves and England icon.

We have all been Harry Miller at some point while following Leeds United under Marcelo Bielsa. At the start of every game, it’s worth comparing the graphic Leeds tweet of their starting eleven to how the players are actually lining up on the pitch. They rarely match. Midfielders drop into defence, defenders push into midfield. Full-backs and wingers are indistinguishable. A centre-forward’s first job is to lead the defence. Jackie Harrison gets the entire left wing to himself. Stuart Dallas plays three positions at once. When things are going well, it feels like an education. When they aren’t, Bielsa is accused of making things more difficult than he has to.

Jason Pearce looking petrified at left wing-back this ain’t. Football has moved on since Wright punished his players by asking them to stand in a different area of the pitch. After spending the first half of his career playing various roles, Kevin de Bruyne has settled into central midfield at Manchester City thanks to Pep Guardiola’s reinterpretation of the position (he once sent David Silva out as a midfield destroyer against Marouane Fellaini, and it worked). Trent Alexander-Arnold has made full-back, traditionally the most unglamorous role in a team, the position of a roaming playmaker. Bielsa isn’t stubbornly trying to annoy the fanbase by switching them around, he’s trying to make his players better footballers.

This philosophy is most obvious in the Under-23s. Whenever they start a second half, it takes me ten minutes to work out which players have switched to which positions. It can only take a single half-time substitution to spark a complete reshuffle. When Archie Gray replaced Jeremiah Mullen against Blackburn last month, it meant a domino effect of six players changing roles. It might be confusing for the supporters, but the players don’t seem phased. They train in different positions, aware versatility might be their route into Bielsa’s first team. Leo Hjelde’s three senior appearances for Leeds have all been in different positions — centre-back, left-back, and left wing-back. Bielsa asked for Jack Jenkins to be given some U23s minutes at right-back so he could assess whether his attributes might be effective in that area of the pitch.

When it comes to the first team, Dan James as a striker has been Leeds Twitter’s particular bête noire, even though his main crime is following each good performance in the role with a frustrating one. Given that applies to the entire squad this season, I’m not convinced it’s his position that’s the problem. In an interview with BBC Radio Leeds last week, James told Adam Pope playing as a striker has already helped him improve as a winger, teaching him, “how the nine thinks and what position he wants to be in.”

Bielsa’s preference for a small squad demands players be versatile, pushing them to develop new skills and understanding of each other’s positions. It might frustrate fans, but players see it as a badge of honour. “I remember at the beginning of this pre-season,” Adam Forshaw told the Yorkshire Evening Post, “Ruben Crespo, our fitness coach who I spent a lot of time with, he said if you can play as a four or a six in Leeds’ team then you can play as an eight, a ten, a winger or anything in any team, because of the demands put on you, even in the more defensive roles here. It does give you pride that you’ve got to a level, playing in this team.”

That’s not to say it will always work. There’s something about scoring three goals at Villa Park that convinces Bielsa to pick Mateusz Klich as a holding midfielder in the following fixture, then quickly shelve the plan. After Klich impressed in the position following Pascal Struijk’s early subbing in the 3-0 win at Villa last season, he was named there for the next game against Leicester, who won 4-1 at Elland Road, putting Bielsa off that experiment for a while. It was back this weekend, when Bielsa responded to the 3-3 draw with Villa by naming Klich as defensive midfielder and subbing him off at half-time with Leeds losing 2-0 at Everton.

Bielsa is often criticised for not having a Plan B, but this is his way of making Plan A unpredictable. The principles of his football remain the same, but a midfield of Klich and Rodrigo is going to give the opposition a different puzzle to solve than, say, a midfield of Adam Forshaw and Stuart Dallas. Maybe the experimentation has held Leeds back, or maybe we’re all searching for a simple explanation of why this season hasn’t been very fun, adding ‘Dan James at number 9’ to a list that includes not signing a central midfielder, relying on too many kids, not playing enough kids, playing three at the back, or breaking all our players by training with too much intensity. Or maybe this is just the bleak reality of the Premier League after a season that tricked us into dreaming Leeds can budget for 17th and still finish in the top half every year. ⬢