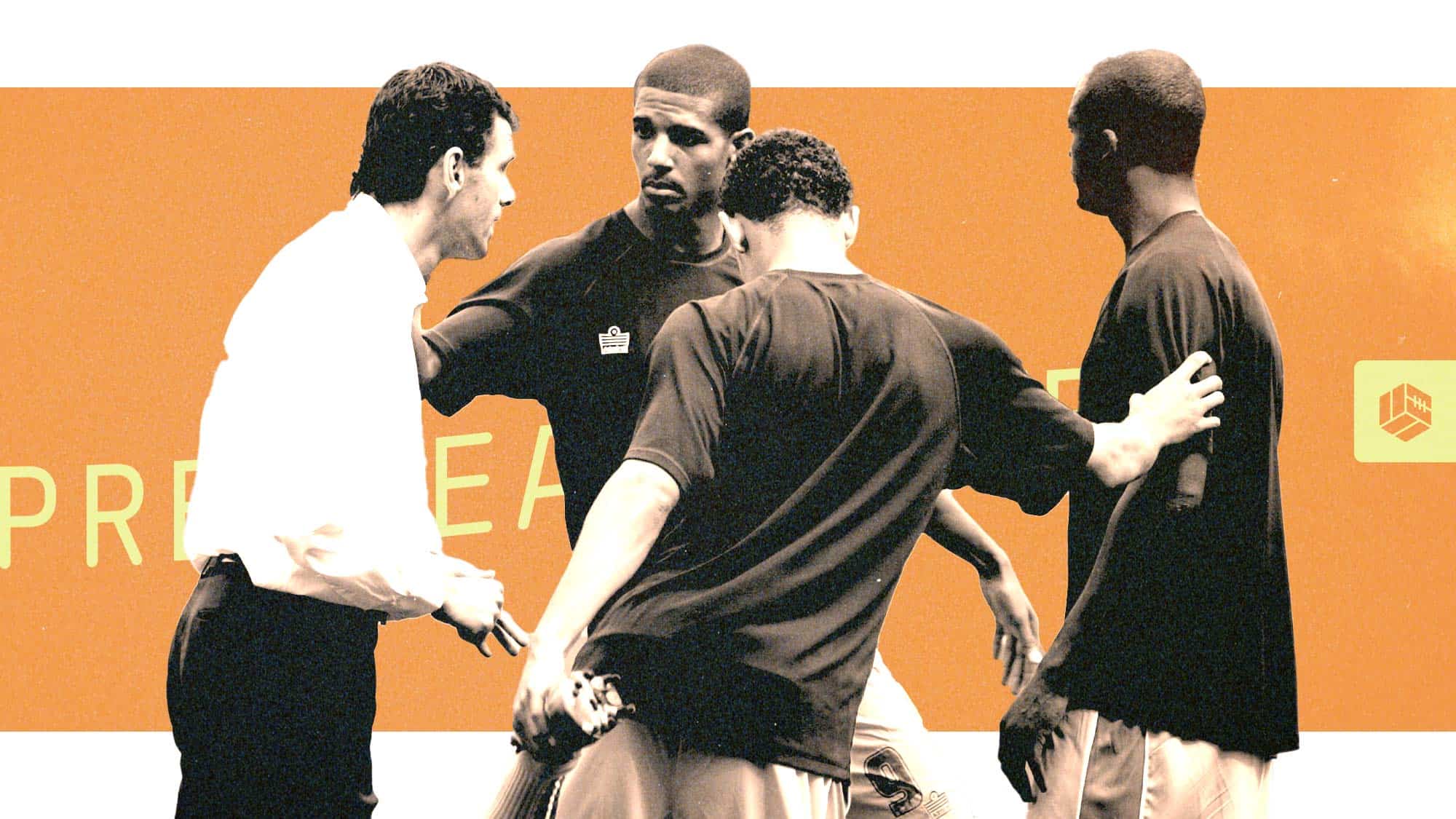 If Dennis Wise wanted to create a siege mentality ahead of Leeds United’s first ever season in the third tier, the summer of 2007 went a long way to fostering that spirit.

By the time Leeds were arriving in Germany for a three match pre-season tour in July, the players had not been paid for almost six weeks. After putting the club into administration at the end of the previous season, confirming relegation to the lowest point in Leeds’ existence, Ken Bates’ contentious buyback was casting a shadow over the future of the club.

The Football League were refusing to grant Leeds the ‘golden share’ required to compete in League One. Wise was counting on trialists to make up his squad, with few contracted players on the books and the club under a transfer embargo. The £2m raised from the sales of Kevin Nicholls, David Healy and Robbie Blake was being withheld by the Football League.

Symbolically, Union Berlin were perfect opponents in the first fixture, a club with a proud history and a devoted fanbase experiencing hard times due to financial difficulties. They were also preparing for a season in their country’s third tier, but Union were on the way up, while Leeds were on the way down.

Union’s fans were quickly dispelling the notion that the friendly was a mere fitness exercise. The 7,500 crowd was above the club’s average attendance, meaning kick-off was delayed by ten minutes as staff on the turnstiles struggled with the demand. ‘Berlin’s supporters did not so much embrace last night’s friendly as commandeer it,’ was the Yorkshire Evening Post’s take. ‘The result before kick-off was an atmosphere that Dennis Wise could not have expected or predicted, but one which seemed to suit his demeanour, past and present.’

Leeds were being backed by their own support, unfurling the banner shown on the final day of the previous season at Derby: ‘We don’t deserve all this.’ One fan preferred looking on the bright side: “Leeds United back in Europe. That’s what we want to see.”

The atmosphere translated onto the pitch, a foul on Tom Elliott sparking a ‘brief melee’, but Leeds were missing chances and wilted in the heat, losing 2-0. Trialist goalkeepers Scott Loach and Nick Hamann were given a half each between the posts, but neither could keep a clean sheet, while Casper Ankergren was waiting patiently in Denmark to hear if he’d be allowed back to West Yorkshire on a permanent transfer.

There was at least one note of optimism for Leeds. Jermaine Beckford, coming off the back of a productive loan spell looking like League One’s Leo Messi while Leeds were being relegated, was ‘a complete contrast to the timid non-league product who left Leeds for Scunthorpe in January.’

The tour of Germany soon became a tour of Germany and the Czech Republic, local police cancelling a scheduled fixture with Dynamo Dresden after hearing plans for violence from their notorious hooligans and 1,000 Leeds fans on their way to attend. Die polizei already had their hands full dealing with a neo-Nazi rally in nearby Leipzig. Slovan Liberec stepped up to fill the void, generously offering to play both Leeds and Dresden on the same day. 400 Leeds supporters re-routed their trip from eastern Germany to the north of the Czech Republic.

Liberec were Czech champions in 2006 and finished 4th a year later. Their manager, Michal Zach, condescendingly praised Leeds for providing tougher opposition than some Czech sides, but Liberec were still 1-0 victors. A Leeds midfield of Seb Carole, Curtis Weston, Ian Westlake and teenager Jonny Howson were not creating many chances as United struggled to score goals. Beckford was still ‘clearly Leeds’ most confident player’, said the YEP, but Tresor Kandol was still missing the few opportunities that did come their way.

Leeds’ players were still waiting to hear when they were likely to get paid, amid reports they would be allowed to leave on free transfers if they didn’t get their wages by an unspecified date. On the day of their next fixture, fans back home were laying flowers at the feet of Billy Bremner’s statue in what one fan described as a “cry for help”, unfurling a banner of shirts that read, ‘Save our club.’

Energie Cottbus hadn’t read the room, banking on Leeds bringing the same glamour as Atletico Madrid the previous summer to a friendly held in Dessau, 130 miles away from Cottbus. Despite large posters advertising the game being placed along dual carriageways and in shopping centres, only just over 4,000 fans attended, around half the crowd that watched Sergio Aguero scoring for Atletico a year earlier.

Whatever Aguero could do, Kandol could do better, finally scoring Leeds’ first goal of the tour, only their third in five friendlies, just after half-time. United were already 2-0 down by that point, outclassed by their Bundesliga opponents in the first half, before rallying to threaten a comeback in the second. Momentum was punctuated by referee Manuel Grafe, dismissing both Jonathan Douglas and Beckford for dissent within two minutes of each other. Douglas was already suspended for Leeds’ first two matches of the League One season, if they were able to play, after being sent off after the final whistle in a defeat at Colchester towards the end of the previous campaign.

‘What followed was theatrical chaos,’ the YEP recorded beneath the headline, ‘Ref wrecks United tour finale’. Wise withdrew his players to the sidelines, perceived as a brief threat to abandon the game. The match eventually continued, giving Grafe the opportunity to send off another member of Leeds’ entourage, Gus Poyet, again for dissent, while ordering Douglas back down the tunnel after he was caught trying to watch the rest of the match from the dugout.

Grafe may have been Leeds’ bete noir, but a quick search of his career since suggests he deserves a place in our hearts. Not content with pissing off Wayne Rooney while officiating an England game, he also showed admirable disregard for Scum’s authority, refusing to be searched on his way into Old Trafford after seeing Jose Mourinho walk past him unchecked. He’s currently bringing a lawsuit against the German Football Association for age discrimination, after reaching the mandatory retirement age for Bundesliga referees and being forced out of the job, despite pleas from players that he be allowed to carry on.

Unpaid players, hostile atmospheres, scraps on the pitch, the threat of hooliganism, erratic refs and Leeds United back in Europe, sort of. In five days Wise was given all the ingredients he needed for his siege mentality. Not that he sounded all that up for the fight when he reviewed the trip. “There has been a couple who have done better than we expected, so that is a small bonus.” Perhaps the players would need alternative inspiration. Altogether now, fifteen points, who gives a fu… ⬢