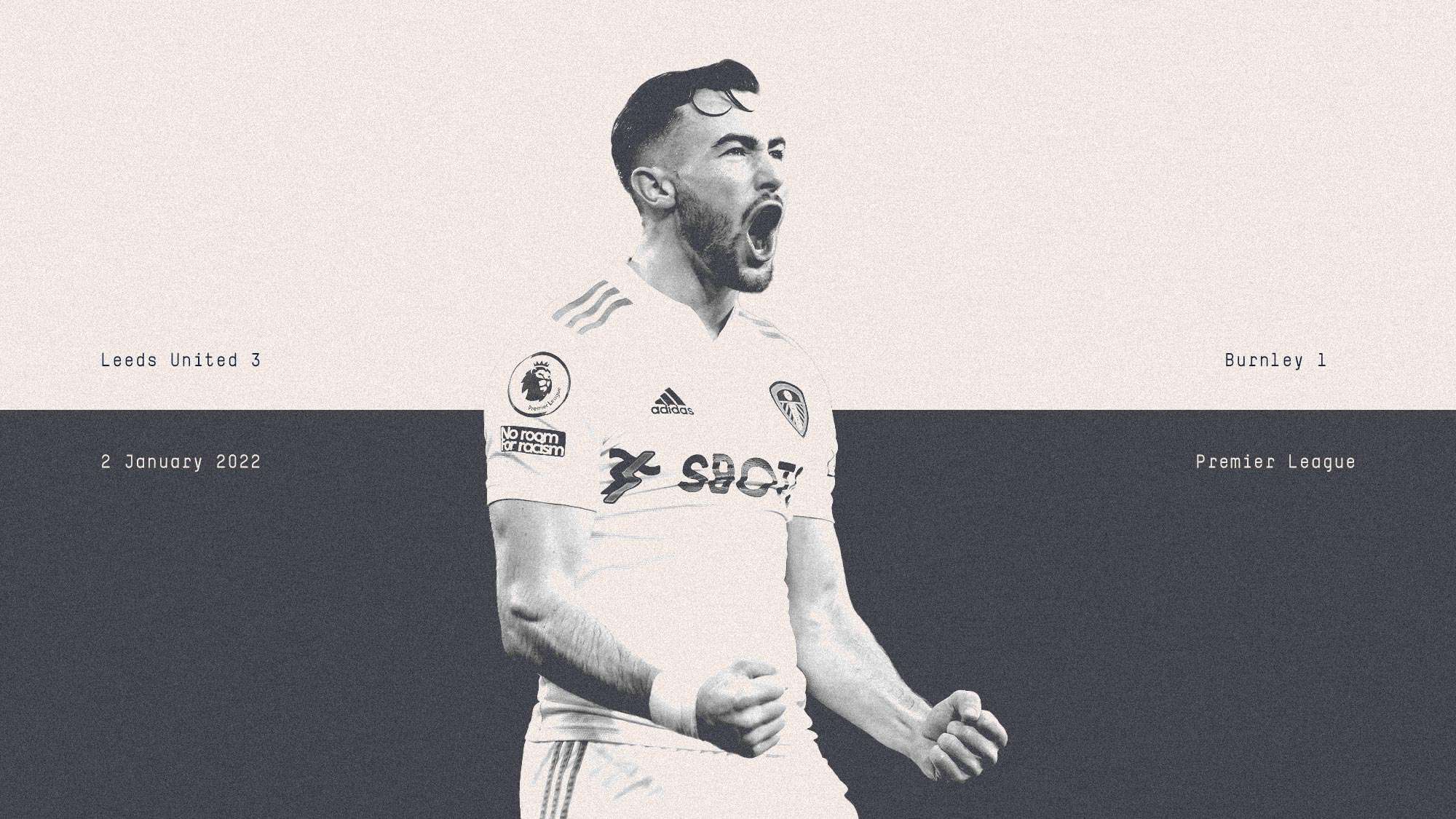 There were no New Year’s resolutions at Elland Road for 2022, unless you count the PA system amping up the latest versions of the same anarchy reigning here for more than a century. The foe’s celebrations punctuated by chucked bottles, speedrunning kids clambering over barriers at full-time, fans at the front of the South Stand hugging Stuart Dallas so hard we can never let him go, Marcelo Bielsa and his assistant Pablo Quiroga embracing in the chaos while Daniel James and Joffy Gelhardt were knee-sliding after the decisive third goal. Bielsa’s was the cuddle seen around the world, and in a pandemic that has driven so many people apart from each other just looking at Quiroga in the grip of what Gabriel Batistuta once called Bielsa’s ‘soul hug’ hit different.

What must Sean Dyche have been thinking? Last week the Burnley manager was bemoaning the phrase ‘player welfare’. He remembered his random example Frank Lampard Junior’s day, he said, “season after season knocking out sixty-odd games with England games on top. I don’t remember too much about player welfare being spoken about then.” He was worrying what the public might think about too much concern for the welfare of players who are very well looked after as it is. “Remember what we are — professional footballers,” he said. Now here were professional footballers, and coaches, cuddling. Hugs and squeezes are very nice, until you imagine Dyche barking at you, ‘They spread diseases!’ and the moment is gone.

Leeds United resist all that. Dyche’s Burnley did what they always do, trying to enforce their big grown-up idea of football as a test of aggressive masculinity that says what was good enough for Frank Lampard Junior in the 2000s, and Frank Lampard Senior in the 1970s, is good enough for now. Leeds, told again and again that their naivety will get them in the end, that their refusal to face reality will mean failure, that they can’t carry on just playing like kids forever, got that third goal when a nineteen year old crossed to a just turned 24 year old, and the 5ft 7in kid scored a diving header while being kicked in the neck. In so many ways growing up is the worst thing that can happen to anybody and Marcelo Bielsa’s Leeds United won’t do it.

I wouldn’t quite say this was Leeds back to their best. The start was uncertain, the ball always being given to Burnley. Just after half past two anyone passing by Elland Road would have felt the Beeston air suddenly chill when Chris Wood’s close range touch on a Charlie Taylor cross was stopped by Illan Meslier’s legs; the crowd had hideous knowledge that this was what those two came back to do, and could hardly believe Leeds got away with it. But while nobody in a white shirt was perfect everybody played well, and by that point the game was already less about Leeds against Burnley than Leeds against whatever it is that keeps stopping them from getting what they deserve out of games.

From the start United looked determined to win this wrestle with fate. They would hardly let Burnley into their half, taking the ball off them and not even thinking before pinging a pass into Raphinha’s path. A clear, effective change from earlier in the season: confident passes in front of players, instead of timid taps behind them. After Tyler Roberts stopped another Burnley meander, Raphinha shot just over from halfway, because why not? Junior Firpo nearly backheeled in a Raphinha cross, because why shouldn’t he try that. If you need a sign that Firpo is settling in, he’s now mastering the left-back in the right-channel manoeuvres up front. He also blazed over from inside the penalty area on the left, after Roberts’ back-heel put him through, another declaration for his Alioski inheritance. Roberts had a golden chance, heading Luke Ayling’s cross from the middle of the goal to wide of a post by a distance roughly equivalent to one agony. That was a minute before Meslier saved from Wood, five minutes before Jackie Harrison finally made it one bastard nil to fucking Leeds.

That’s how he scored it. Seizing on James Tarkowski’s lazy pass, Harrison powered into the box, sold a trick to this same Tarkowski, had a shot blocked by Wayne Hennessey then shot again into the net and if he’d had to he would have shot again and again until it went in because that’s just what was happening.

Dyche made the few moves his rigid tactics allow him: putting Maxwel Cornet up front with Wood instead of the nearly invisible Aaron Lennon, and telling his players to stop time-wasting. It worked; otherwise strong and assured, Robin Koch and Diego Llorente wavered, the latter giving away a free-kick to Cornet, who smacked that around the wall and inside Meslier’s post. He then followed Dominic Calvert-Lewin, Gabriel Martinelli and others this season whose fashion is to antagonise fans in the north-west corner without prior provocation, leading to general upset and stuff thrown. Obviously smiting players with bottles to their faces isn’t on, and anybody tempted to do it needs to pause and wonder if it’s worth the banning order, but equally there is a well beneath that corner and I’d endorse modifications to the pitch to allow a swift dunking of the next goading idiot who dances there knowing what it might incite.

Anyway, 1-1, but nothing suggesting Leeds were done. Koch and Llorente sorted themselves out, and Gelhardt came on when Roberts was injured to transform the attack, and the atmosphere. A lot of people think Joffy should start games but is that worth losing the impact he can have, on the mood of 36,000 people, by jogging up the touchline and onto the pitch midway? James joined him, replacing Harrison, and United started going through rather than around, letting them two turn and chase rather than aiming for the touchlines to cross. James did cross, and at the back post Raphinha missed an open goal, but scoring came on time, Raphinha and Klich taking a rapid short corner infield for Stuart Dallas to shoot and bury the ball, then burying himself in the front of the South Stand to celebrate a goal in his 250th Leeds game. I’m not sure who was hugging who more, Dallas or the fans, or who needed that hug more, the fans or Dallas. It went on so long that Klich, tired of watching, had to disentangle Dallas from the crowd, or he might still be there now.

Again Dyche cut the time-wasting, again he changed his attack, opting for big men only rather than one big man plus pace. In stoppage time Leeds mocked all that, Klich too strong and too skilful for Burnley, releasing Gelhardt, the little lad, to cross for James, the littler lad, to dive a header like prime Lee Chapman from the days when that 6ft 2in striker shrugged off a broken face and a broken wrist to keep scoring goals until Leeds won the league. Hennessey delayed its way in with a hand but that helped James most, who got to watch it going in with slow delight instead of a netbusting thrill. Down the line, Bielsa and Quiroga took it slow, lost savouring all this in each other’s arms. “Realities are realities,” Dyche growled after the game. Not in Leeds. ⬢