Leeds United could be forgiven for thinking, in summer 1981, that everyone else was mad, not them. That’s probably why spending more than the club’s entire £900,000 transfer budget buying winger Peter Barnes felt like a sane move. 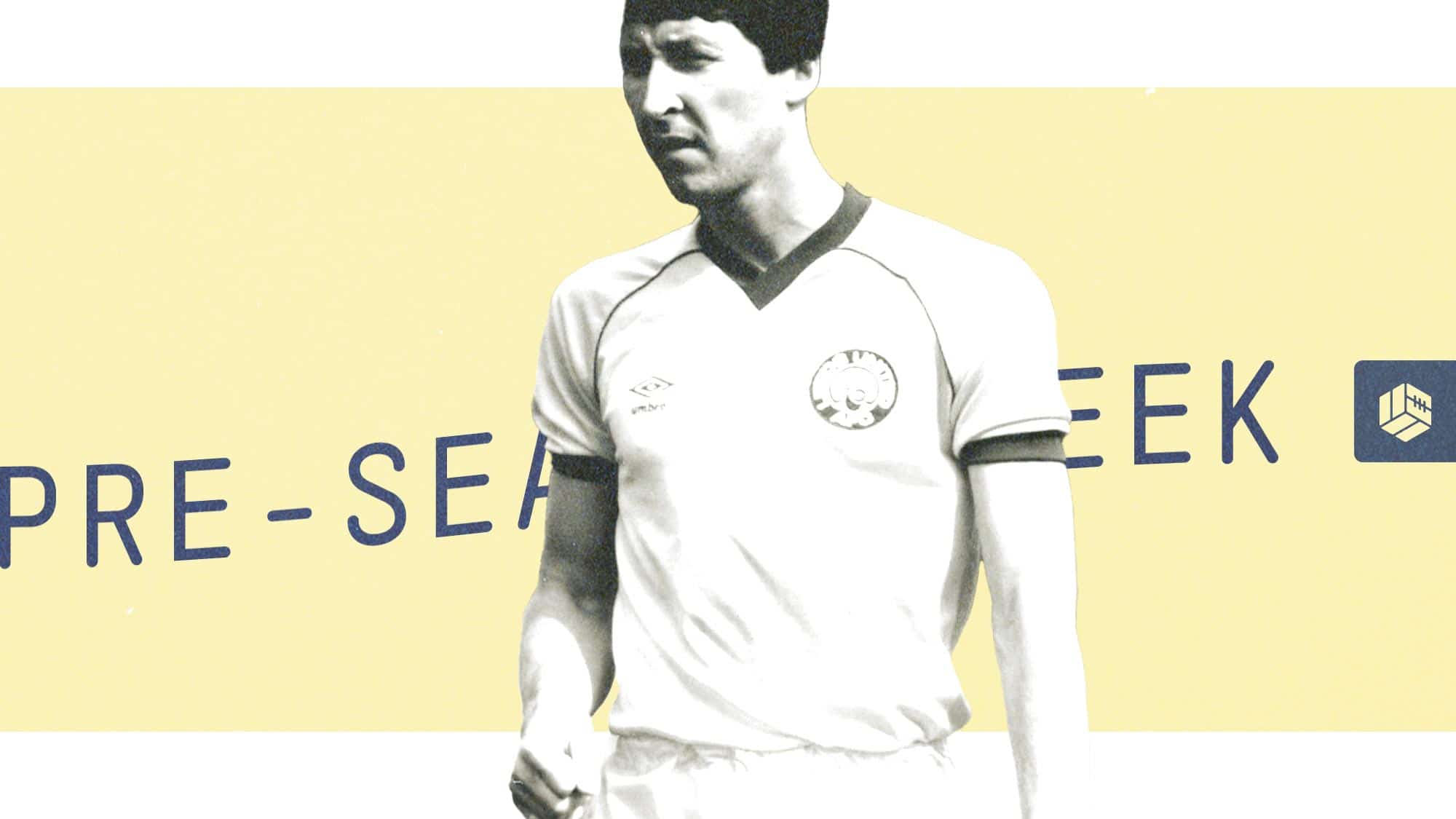 Manager Allan Clarke skipped a pre-season tournament in Spain to wrap that deal up. Barnes wasn’t the sort of player Leeds had wanted, but almost a year of hunting for an experienced but affordable goalscorer had come to nothing, so Clarke was going for the next best thing, a winger who could make chances for strikers Derek Parlane and Terry Connor. Of course, as soon as Barnes was signed and sealed, Cologne got back in touch to say they were willing to sell Tony Woodcock, after all, if Leeds could find £600,000. While Clarke went on another pre-season trip, to Toronto, his assistant Martin Wilkinson stayed behind, hoping to talk to the England striker as he toured interested clubs. Of course Leeds didn’t have another £600,000, and in the end Woodcock stayed in Germany for another year, scoring fifteen goals in 32 games, before joining Arsenal, where he was top scorer for three seasons while scoring 56 in 131. In 1981/82, for Leeds, Peter Barnes scored one. But we don’t have to worry about that now.

More immediately worrying, in August 1981, was a ‘traumatic experience’ in Spain, that had the YEP’s Don Warters asking Leeds if they would bother with such high-profile pre-season tournaments again. To Leeds United, these tournaments were interesting workouts, but everyone else seemed to be taking them much more seriously than was sensible.

In Algeceiras, Leeds started the La Linea Tournament with a 3-2 win over Sporting Gijon, but the final against Real Madrid was the big game, bigger than Leeds realised. According to Gary Edwards’ book, Paint It White, the beaten European Cup finalists were determined to save face and put a trophy in their cabinet. Quite how a pre-season pot would make up for losing to Liverpool in the final of the biggest club competition in Europe wasn’t clear, but the locals were adamant that, however it came about, Leeds could not win. They also couldn’t wear their own kit: it was in Real Madrid’s contract that they would wear white, and the referee wasn’t impressed by the contrast of Leeds in yellow, so black and white striped shirts were borrowed from fellow guests Partizan Belgrade.

The ref was Emilio Guruceta Muro, and Warters reckoned him the worst he’d ever seen, even after Ray Tinkler, Christos Michas, Michel Kitabdjian and the rest. His performance stuck in Paul Hart’s mind until 1984, when he saw a suspicious amount of activity around the Anderlecht dressing room before Nottingham Forest’s UEFA Cup semi-final. “I remember saying to Kenny Swain I hope it’s not the same guy we had when I was playing for Leeds in a tournament in Spain a couple of years earlier … Then we were waiting in the tunnel and there he was — the same guy.” Unlike all the times Leeds were unjustly treated in Europe, the truth about that Forest game was finally revealed in 1997: Anderlecht’s president had paid Muro £18,000 to fix the game.

We don’t know whether money changed hands in 1981, but after half an hour, with Leeds already 2-0 down, Muro sent Arthur Graham off for reacting to a hard foul by Uli Stielike, and the game was held up for seven minutes while Graham protested, officials negotiated for Alex Sabella to replace him, then Madrid protested about that, the red card was confirmed, and Muro went to the sidelines to give an interview to television.

It might have been the referee’s sense of priorities that caused the next problem. He refused to start the second half until it had been properly communicated to the English visitors that Leeds United’s players were to stop laughing at him. The message not heeded by Derek Parlane, and he was sent off for exactly that: laughing at the ref. Laurie Cunningham made it 3-0 while the game, delayed by arguments, red cards, laughter and the ref’s television appearances, dragged on past midnight.

So much for Spain. But Toronto a few days later, with Allan Clarke and new boy Peter Barnes along, promised much better. Eddie Gray was superb in the first match, and Peter Barnes ‘electric’, against Ecuadorians Barcelona. But while the referee wasn’t a problem to Leeds, the other team didn’t share their opinion. Nobody had any complaints about Paul Hart being sent off for punching an opponent, just before half-time, but as the game came near the end of extra-time with the score 1-1, Barcelona were convinced they should have a penalty for what the YEP said was a dive over Neil Firm’s outstretched legs. Barcelona’s manager, Humberto Maschio, was particularly sure of it. As a player, Maschio was one of ‘The Trio of Death’ who moved from Argentina to play in Italy in 1957. Now he was at the forefront of a staff pitch invasion, and Barcelona’s number 23, international striker Carlos Torres Garces, if not with death on his mind then something quite like it, was kicking the referee, Gord Arrowsmith, to the ground. Arrowsmith, an off-duty Toronto cop from London, tried restoring order with red cards for the pair of them, but realising the situation was heading above his pay grade, he and his assistants made for the changing rooms and left everyone to it.

It took half an hour before the first resolution: despite the tournament organisers’ bright idea of bringing everyone back out for a jolly round of penalty kicks to decide the game, Allan Clarke wasn’t having it, and the stadium announcer told the crowd to go home. “We’re professionals, and we don’t argue with referee’s decisions,” Clarke said, as if he’d never even met Billy Bremner. “The ref told me he had abandoned the game so I got the lads off and in the bath.” He was willing to try spot-kicks the following day, but by then the situation had reached the referee-in-chief of the National Soccer League, Larry Naccarato, who ordered Leeds through to the final. Clarke had no sympathy for the referee’s attacker. “That lad should not play professional football again,” he said.

In the other, calmer semi-final, Portuguese double-winners Benfica beat local side Toronto Italia, and in the final, ‘Every last man, woman and child from Toronto’s Portuguese community seemed to have turned out to cheer their heroes,’ according to the YEP. In a close match, Brian Greenhoff gave away a penalty, and Benfica won 1-0. Clarke was impressed by his big new signing, Peter Barnes: “He’s going to entertain a lot of supporters and put a few thousand on our gates, too.” But not everything was rosy. “We are still not putting our chances away,” he said. Maybe in the less volatile landscape of Football League Division One, 1981/82, the sanity of United’s approach would shine through. ◉