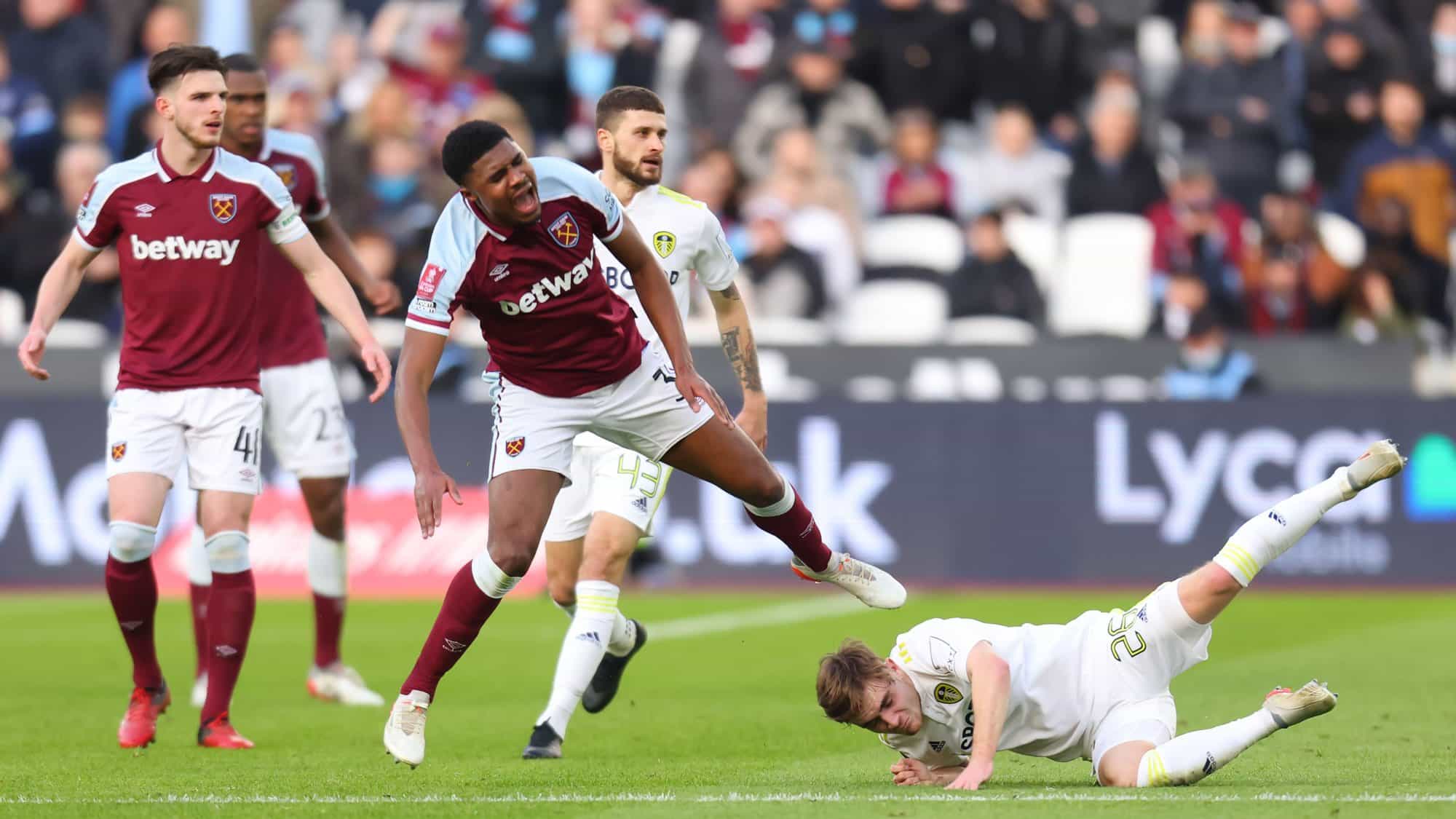 Making the impossible feel possible has been Marcelo Bielsa’s greatest gift to Leeds United, but even he hasn’t been able to break the hex the FA Cup holds over the club. Reality TV stars at Crawley aside, however, he has at least provided a blueprint for respectable exits.

As kick-off approached on Sunday, the thought of Leeds playing in the FA Cup third round live on TV gave me a pang of anxiety, frightened of the horrors about to blight my weekend. Instead, losing 2-0 at West Ham felt a lot like losing 1-0 at Arsenal in the promotion season. The TV cameras were at the Emirates in January 2020 awaiting two teams prone to embarrassing themselves, only to broadcast a rotated Leeds team laughably outplaying Arsenal in the first half before losing to a frustrating goal in the second. We even got an excuse to howl at VAR for failing to punish Alexandre Lacazette’s rake down the back of Gaetano Berardi’s achilles.

Two years later, Leeds’ latest FA Cup defeat followed a similar script. Leeds weren’t as dominant in the first half as they were at Arsenal, but David Moyes could not be tempted into as many changes as Mikel Arteta, naming a team close to his favoured Premier League eleven, while Bielsa reprised Robbie Gotts’ role as surprise starter by picking Lewis Bate and Leo Hjelde without a single minute from the bench to prepare them. Bate’s start tallied with something Angus Kinnear said on The Square Ball podcast ahead of the new season. Most young signings are embarking on a two-year process of acclimatising to Bielsa’s football with a season in the Under-23s before getting opportunities in the first team in the following campaign, but Bate is further along in his first year of development if not quite ready for an accelarated second season style breakthrough. Making his debut against West Ham feels more like a launchpad for bigger things to come for Bate, whereas Gotts’ appearance against Arsenal seemed like a reward for perseverance through thirteen years in the academy and 35 games unused on the first team’s bench. Illan Meslier made his own debut that night against Arsenal, evolving over the intervening two years, from spraying sixty-yard passes at the Emirates like the Lorient Pirlo, to trying to score from a corner in Stratford.

VAR once again added some pantomime villainy, failing to find a reason to ignore Jarrod Bowen’s obvious offside in the build up to Manuel Lanzini’s opener, but awarding the goal anyway. That meant a Leeds side featuring five U23s were beaten by a goal that shouldn’t have stood and an injury-time counter-attack they were susceptible to while chasing an equaliser. A different ricochet off Dan James’ ankles and the game could have been very different, but much like the defeat at Arsenal, it’s hard to be too disappointed when priorities remain with the league rather than the cup.

Bielsa knows better than anyone that you can’t please everybody, and Leeds know better than anyone that you can’t trust the London press. A game of fine margins and little excitement is made to sound like a return of the fabled West Ham Way in The Guardian’s match report, written by West Ham fan Jacob Steinberg. ‘West Ham happily accepted an afternoon free of drama,’ according to Steinberg. They ‘cruised’, ‘comfortably keeping Leeds at arm’s length’. Declan Rice ‘was always in charge in midfield’. Hjelde’s impressive debut was relegated to the collection of defenders that ‘spent most of the contest bouncing off Michail Antonio’, and was at fault for ‘naive defending’ in Lanzini’s offside goal. Lewis Bate was ‘looking lightweight’. Steinberg describes Leeds suffering from ‘toothlessness’, ‘no zest’, and — back to the gums — ‘toothless’ again for good measure. Leeds weren’t great, Bielsa acknowledged as much, but were West Ham really that drastically different?

To give Steinberg some credit, at least he noticed Bate was replaced by Stuart Dallas at half-time, a detail that passed by The Telegraph’s Matt Law, who has previous for refusing to pay attention to what Bielsa does. ‘It was no surprise that Leeds, for whom Luke Ayling had cleared a Bowen shot off the line inside the first ten minutes, made a change at the break — sending on Raphinha to replace Sam Greenwood,’ Law wrote, before naming Dallas among Leeds’ unused substitutes and awarding Bate’s performance 5/10 in his player ratings, presumably knocking points off for being anonymous in the second half.

Of course, none of this is new. In October 1989 Leeds faced West Ham at Upton Park with the national media watching from the press box as the top flight took a break due to internationals. Aghast at Howard Wilkinson’s side having the temerity to beat the hosts, who started the season joint-favourites for promotion alongside Leeds, the post-match press conference consisted of half an hour of journalists desperate to resurrect the ‘Dirty Leeds’ tag asking Wilkinson to explain and defend the football his team had just played. ‘This game made you weep,’ wrote Brian Woulnough in The Sun. Patrick Collins put down the pearls he was clutching to write in the Mail on Sunday, ‘The game offered a quite disgraceful exhibition of all that is indefensible in the English game. Leeds have never attracted affection but at least their teams of earlier generations possessed genuine ability. All gone. Replaced by cynical scufflers who won three points, fifteen offside decisions and the contempt of the neutrals.’ Don Warters wrote in the Yorkshire Evening Post that plenty of managers would have walked out of the press conference, but Wilkinson knew what to expect. In an interview with Look North, he described the press coverage as, “Deep down, very very funny, because it was, in a way, so predictable.”

Law’s blindspot when it comes to Bate is a good example of the precarious fate young players are trying to escape while establishing themselves. Robbie Gotts had his day at Arsenal but had to leave for Barrow to get the opportunities required to fulfil his potential as a footballer. Cody Drameh came off the bench against West Ham but was being linked with a loan move to Cardiff by the end of Sunday. Drameh and Leeds have to decide whether his development is better served by murderball under Bielsa or Championship football under Steve Morison, who once criticised elite academies for failing to produce “manly” players. His complaints were sparked by another young full-back, Ben Chilwell, who Morison accused of being too scared of Millwall’s fans to take throw-ins while playing in an FA Cup tie for Leicester at the Den. Chilwell called Morison’s claims “a load of rubbish”. “I think one of the older players for Millwall maybe wanted to get at one of the young boys,” Chilwell said. “I’m not going to look into it. It is strange. But each to their own. If that’s what he wants to do, I’ll let him do that.” Chilwell may have missed Morison’s lessons in masculinity, but the England caps and Champions League winner’s medal probably make up for it. Regardless of the injuries testing just how thin Leeds’ squad can stretch, maybe staying as far away from Morison as possible is the best thing for Drameh’s long-term prospects.

What do all these Cockneys really want? Lose in London and we’re lightweight and not manly enough. Win in London and we’re all that’s wrong with the English game. On Sunday, Bielsa’s Leeds tried the former and were predictably ridiculed. Back in London to face West Ham again next week, let’s try the second option of winning, even if it does upset a few people in the capital. “What was important was that we were happy,” Howard Wilkinson told Moscowhite for the book and film ‘Do You Want To Win?’, while reflecting on 1989’s Upton Park inquest. “If we were happy, then I knew we could make everybody else happy.” Well, maybe not everybody. Only the people that really matter. ⬢