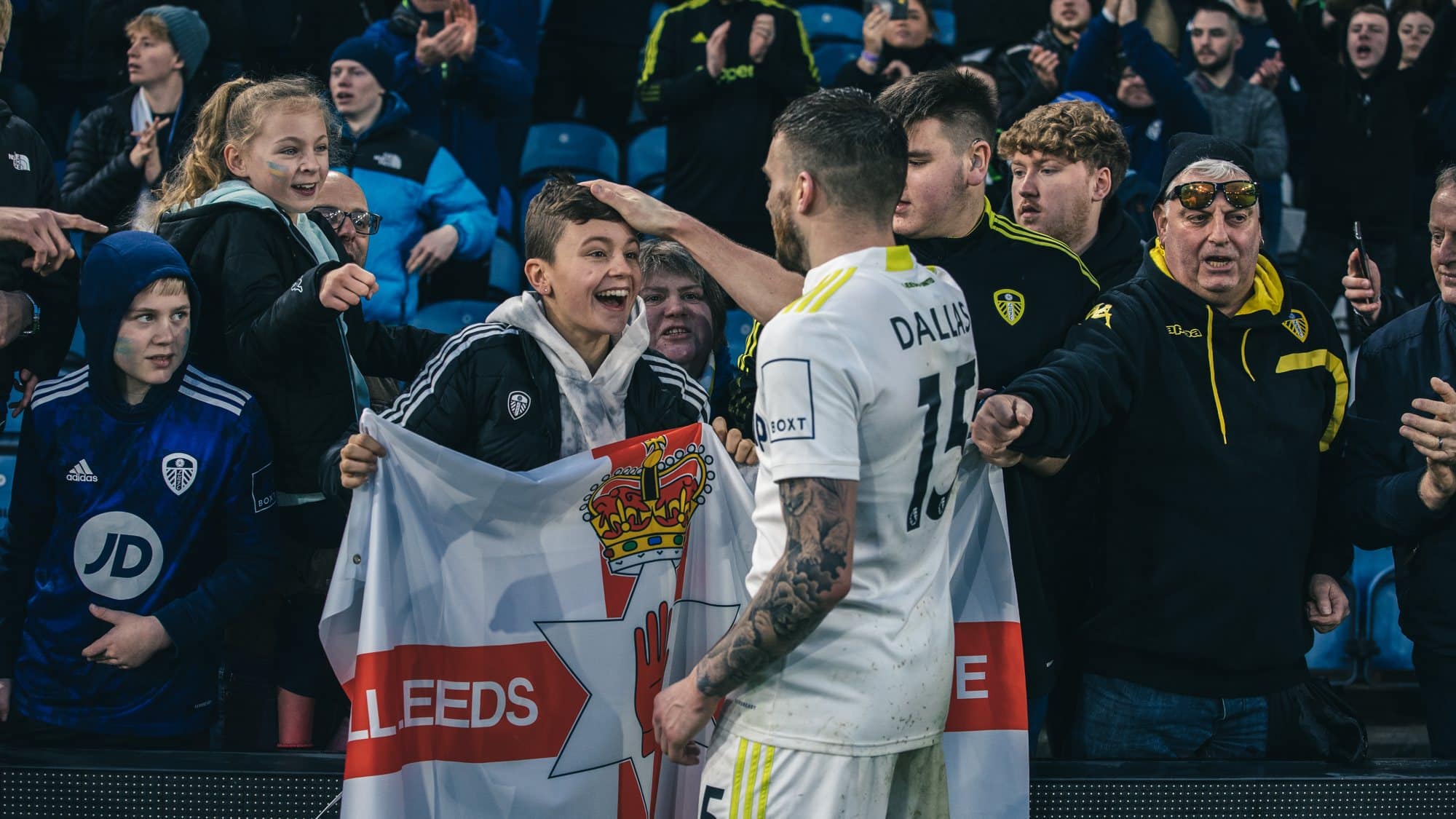 As the full-time whistle confirmed Leeds United’s 3-1 win over Burnley, Luke Ayling was sharing a long overdue celebratory grin with Stuart Dallas. Marcelo Bielsa had already indulged in a rare public display of affection, making assistant Pablo Quiroga the envy of the city with a wholesome bearhug in celebration of Dan James scoring Leeds’ third.

Adam Forshaw was feeling the love as well. Throughout his two years of rehab from a never ending injury — “two years of hell”, he called it — Forshaw’s motivation was to get back so his young son could see his dad being a professional footballer. Just before walking down the tunnel back to the changing room, Forshaw stopped to look up at his two kids with their mum, giving them a wave and double thumbs up before disappearing. “All his family and all the people that love him will feel admiration for this achievement,” Bielsa said after Forshaw started his first Premier League game at Elland Road against Leicester in November. His son is finally getting to understand what all the fuss was about. Forshaw shared a short video of the moment to his Instagram stories, captioned, ‘My boy is obsessed now.’ Another one lost to the psychodrama of Elland Road. Sorry, kid, it really is this stressful most of the time. Don’t worry though. It really is this fun, too.

In the absence of Captain Cooper, the rest of the Squad Dads had their fingerprints all over a win that already makes the start of 2022 feel much clearer than the end of 2021. Ayling, Dallas and Forshaw share this status with Mateusz Klich, even if he is more of a cool tearaway uncle who Joffy Gelhardt can hang out with rather than a fatherly figure to ask for wisdom and guidance. Against Burnley, all four did good and bad things, because that’s how football works: footballers are human, and humans make mistakes. Even Raphinha. But all four showed why Bielsa is choosing to trust his senior players to deal with the pressure of difficult periods rather than asking a bunch of teenagers to rescue the club from a relegation battle.

Almost four years on, Forshaw is finally living up to Bielsa’s words shortly after taking over Leeds, when he described the midfielder as the “best player in the team” during his first pre-season. Bielsa is as surprised as anyone. “I seriously had doubts that he could achieve what he just achieved,” he said after the draw with Leicester. Unless my memory is deceiving me, the 771 days in between Forshaw’s last league appearance for Leeds in the Championship and his first in the Premier League have helped him become a different player. Was he always this combative? Did he always cover this much ground?

Maybe it’s because Kalvin Phillips is missing, but Forshaw is leading the way when it comes to one of the often overlooked principles of Bielsaball, roughly translating to ‘getting fucking stuck in’. Both Bielsa and Sean Dyche referred to this in their post-match press conferences. “They had the edge against us with that desire,” Dyche said. Bielsa opted for “commitment” instead of desire. The likes of Stan Collymore will tell you commitment and desire are traits ingrained in English football by teams like Dyche’s Burnley rather than some fancy dan foreigner people dare to praise in Stan’s hearing. Yet there was Forshaw, trying to block a clearance by propelling himself at the feet of Matt Lowton, immediately jumping up to win a header against the full-back. Dyche was less impressed by United’s desire at the time, moaning at the fourth official about the original challenge from Forshaw, who was standing ten yards away with a satisfied smile.

Captain for the foreseeable with Liam Cooper injured until March, Ayling revealed the blueprint for much of the game within the opening five minutes, stealing the ball from a Burnley attacker before helping Klich start a counter attack that set Raphinha free down the right with a long pass. Ayling was taking responsibility by getting on the ball as much as possible, completing more passes than anyone else on the pitch. After Charlie Taylor almost created a goal for Chris Wood, Ayling answered my cry of, ‘Why can’t we cross like that?!’ by placing a perfect ball onto Tyler Roberts’ head. We don’t need to talk about Roberts’ header here, but we do need to add Ayling’s bandaged hand to the mysteries of 2021/22. Just like I want to know who told Raphinha about Tim Krul, I want to know why Ayling has come back looking ready to left hook some wingers. Are Leeds toughening their players up by making them box each other, like Illan Meslier at Lorient? Has Ayling been trying to lift his teammates’ spirits with over-enthusiastic Leeds salutes? Has Rob Price made another deal with the devil, swapping Ayling’s wrist to fix his knee?

Klich could be afforded a wry smile if he read Bielsa’s post-match comments. “As you well know in football, every week you have to prove yourself,” Bielsa said, which would have resonated with a player hounded off Twitter for giving away a penalty against Chelsea after almost three seasons of unparalleled graft. Conceding that late penalty at Stamford Bridge overshadowed some classic Klich midfield play that helped create Gelhardt’s equaliser, and his role in Leeds’ third against Burnley was more of the same, forcefully winning the ball on halfway, tricking Jack Cork with a turn as mischievous as spraying a bottle of water down an opponent’s neck, and playing Gelhardt into space to cross for James to score. James sprinted off celebrating, but Klich was too haggard to chase, looking to the skies in relief before chuckling at the release. The freedom of playing as Leeds’ more advanced midfielder may suit Klich more than playing as the no.8 at this stage of his career. He played seven key passes (a pass that leads to a shot from a teammate), more than twice as many as the next best Leeds player, and one more than the entire Burnley team.

The day belonged to Dallas, marking his 250th Leeds appearance with a beautiful finish to put Leeds back in front, breaking Burnley and inspiring Elland Road, whose embrace he could barely tear himself from. Dallas continued the family affair afterwards, speaking to LUTV about his joy at finally scoring his first goal of the season in front of his kids. It arrived after a spell of Leeds pressure in which Forshaw, Dallas, Ayling and Klich were standing in a line outside Burnley’s box, manipulating Leeds’ forwards and Burnley’s defenders, deciding when and where to attack. Klich’s eventual cross gave Leeds a corner, and he figured there was no time to waste, taking the set-piece sneaky quick with a gentle roll of the ball to Raphinha. Dallas confirmed Klich’s decision was right by finding the far corner, dragging Leeds away from the relegation zone.

Before kick-off, Opta’s Jonny Cooper tweeted that Dallas is the first player to reach 250 games for Leeds since Lucas Radebe in 2003. The stat sums up how transient Leeds became as a club in the wilderness years, until Dallas and co were brave enough to fail and keep coming back until their goal of promotion was secured. There’s always the temptation, particularly during a transfer window, to pine for something new and shiny and exciting. A no.8 who’s not Vurnon Anita, perhaps. Reinforcements may help, but these senior players were the bedrock of promotion, the bedrock of finishing 9th last season, and will be the bedrock of whatever direction the rest of this campaign takes. Returning Leeds to the Promised Land and keeping us here will be a defining legacy for these players. With each passing game we’re getting closer to one day having to say goodbye, but the Squad Dads’ work is far from done. ⬢