Meet the coach of your new favourite football team 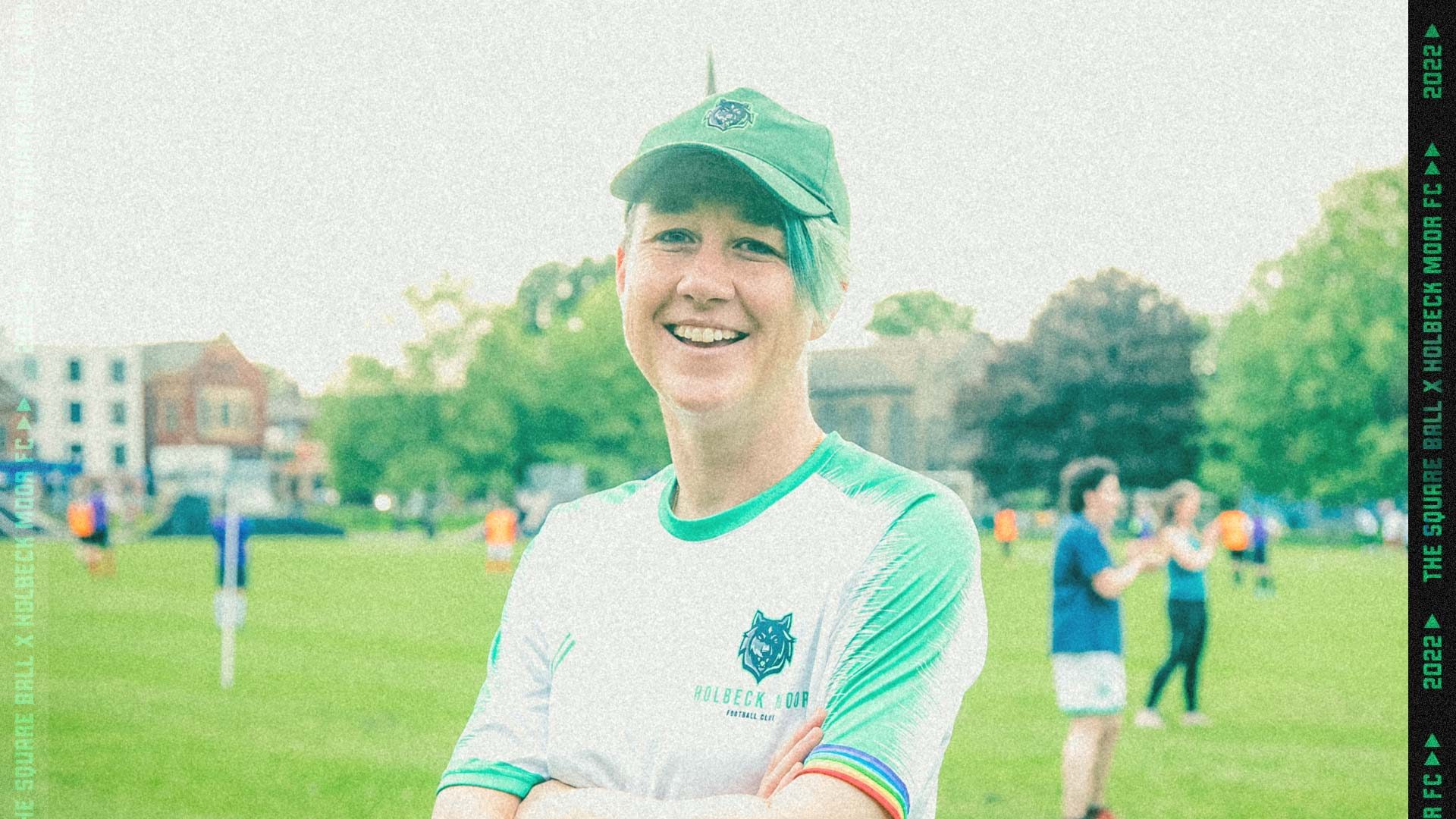 While we’re sitting in a corner of The Holbeck WMC drinking cups of tea, I ask Claire Graham, coach of Holbeck Moor FC Women, why her nickname is Blue. Without Claire saying a word, the answer quickly becomes obvious. Whipping off her hat, she reveals a bright blue mohawk. “I’ve only just had it shaved again,” she laughs, feeling her fingers against the freshly cropped sides.

Blue earned the nickname when playing for Leeds-based socialist football club Republica. Like the Arsenal youth team featuring Luke Ayling all being called Bill ‘something’, there were lots of Claires playing for Republica, so she became Claire ‘Blue’. It has stuck ever since, to the extent that when I spoke to some mutual friends, they didn’t even know her real name.

Blue is from Blackpool, and grew up supporting her local team. “And then along comes Oyston and everyone boycotts and I’ve never got back into it,” she says. “I probably couldn’t name you two players now. I quite like not supporting a team. I just like football. It’s a bit of a freedom.”

After moving to Leeds for university Blue became interested in the intersection of sport and politics, inspired by her tutor. “I was learning about sociology and all these terms that helped me become more eloquent about how I feel; now I have these words to express it. I always played football growing up but was quite good at hockey, so I got pushed towards that. All through uni I played hockey and then thought, I bloody hate this. I learned about Republica, gave up hockey, and started doing what I enjoyed again.”

Working for a charity called Voluntary Action Leeds, Blue was introduced to Slung Low, helping to provide volunteers for their foodbank. After finding out Slung Low were starting a football team, she immediately asked if she could join. Slung Low’s Alan Lane sent her an email. ‘We’re looking for a women’s coach, don’t fancy it do you?”

On the day Slung Low wound up their foodbank, Holbeck Moor FC held their first open training session. Slung Low staff turned up in their boots, expecting to be required to boost numbers. Instead, over fifty people turned up. The club aims to provide access to the mental and physical benefits of being part of a sports team in an area where there was no adult club and fewer than one in ten residents used local leisure facilities. Blue advertised the team in various organisations she works with, also securing donations of kit and boots so potential players didn’t have to worry about turning up in the ‘right’ gear. Around 25 women joined that first session.

“That was so exciting,” Blue says. “The team is about people that have never kicked a ball before feeling welcome, so there was something really lovely about them turning up in kit.

“When I was initially talking to Alan about wanting to start a football team that’s got no barriers to people accessing it, it was, ‘Right okay: creche, transport, sports bras.’ Sports bras, pretty easy. Transport, it costs money, and trust, because you get a password for an Amber account and it’s ‘order your own taxi’. The creche was all sorted through the local school, who Slung Low have got a great relationship with. One person is a special needs teacher, with two others.”

Blue’s enthusiasm is infectious. She gets most excited when talking about the women she is coaching, and the supportive environment they have created for themselves without it being prescribed. After a few weeks, one player wrote a letter explaining her struggles with her mental health, and how the team had made her feel comfortable opening up about it for the first time. When it came to voting for a captain, her peers wanted her to wear the armband. Another player helped her teammate who has recently moved to the country get work in a charity shop so she could make new friends and improve her English. By the time we’ve finished our cups of tea, they’re my new favourite football team.

“Republica were more overtly political in being an anti-fascist team. They were very up front about it and had a constitution you had to sign. That’s not what Holbeck Moor is in any way at all. It’s unspoken. There’s a beauty in that.

“I would say that at least 50% of the women that you’ll be playing with hadn’t really kicked a ball before, or played at school and then never kicked a ball after that. Equally I wouldn’t want to put someone off who is a decent footballer. I think we gel together really well.

“One of the things that really struck me, because everyone has been through two years of lockdown and the pandemic, is that poor mental health is hugely on the rise. And again, we never pitched the team to be anything particularly around supporting people through mental health but Abbi, who is our captain now, within our first couple of weeks of starting she wrote a lovely letter that said how she really has struggled with her mental health, and she found that this football team had really brought her out of it and helped her. Her being that bold and saying that has brought so much out of others feeling able to talk about such tough stuff.

“Wan, who comes through Rainbow Hearts and does a lot of stuff around maternity and postnatal stuff around mental health, wanted to do a little film. We asked about seven different players who speak on it, ‘How has football helped your mental health?’ People are talking about it openly. Nobody has encouraged these people, and I don’t think you’d get it if you said, ‘Come and join this football team, it’s for people with poor mental health.’ It’s got to be genuine, hasn’t it?

“So I’d also say to somebody who wasn’t sure whether they wanted to come or not: it is intimidating to start with a new team and walk up to a group of people you don’t know, but we are honestly the most supportive and welcoming team. I love it. It’s not me directing that. Everybody supports each other. It’s lovely to see, because I can just step back and it happens. Naturally people just want to support each other. I love it.”

So as much as Holbeck Moor FC gives to her players, what does it give to their coach?

“It has really invigorated me,” Blue says. “I’d parked the politics out of football and just wanted to play. It’s made me realise there’s more to football. That ‘football for all’ concept, my passion lies in making football accessible to everybody. That’s what I love doing, that’s what I get a lot from. Be it somebody who is quite a good footballer who hasn’t played since they were eighteen — I think they call it the post-sixteen gap where people just fall out of it once they finish school — or equally somebody who has never ever kicked a ball and over the course of a couple of months really becoming more confident as a footballer and more confident in themselves.

“One of our players expressed it really well when she said, ‘All my mental health worries and all the anxieties I have, when I’m just concentrating on a ball, my mind just goes blank again.’ So to know you can offer somebody something and that’s what they get out of it, there’s a huge reward in that.

“I do want to play myself. I’ll come on the pitch for the last quarter of an hour of a game. I can’t help myself. I’m not hanging my boots up yet.”

Anybody interested in joining Holbeck Moor FC can email [email protected] or call 07305 155698. We can also heartily recommend pre-game drinks, and post-game drinks, at The Holbeck, the oldest social club in Britain.