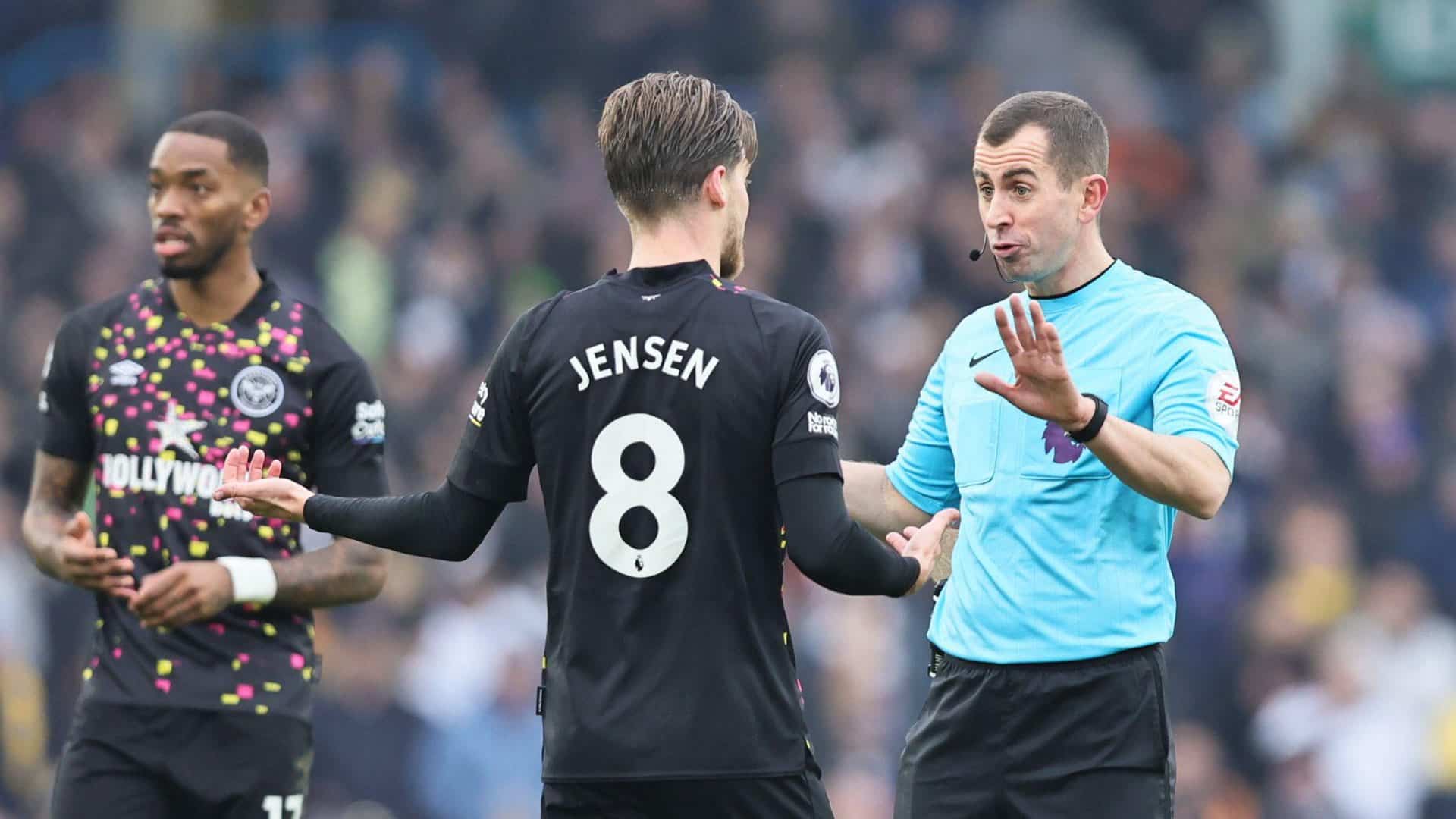 Counting how many free-kicks Bankes awarded, cards he brandished, or minutes he added on won’t do his performance justice. He transcended the whistle and notebook by becoming Brentford’s most impressive defensive midfielder. Bankes had as many touches as Brentford sub Yoane Wissa, completed twice as many passes, and made more interceptions than any other player on the pitch.

This was an unexpected foiling of Jesse Marsch’s Red Bull handbook. Jesse’s quest for ‘minimum width’ had a big enough challenge playing through Brentford’s three lumbering centre-halves, and it depended on getting past Bankes’ industry in midfield first.

Inspired by the tactical gravitas of The Athletic’s play by play breakdowns, I’m trying to bring some more highbrow analysis to TSB, exploring down what made Bankes so effective in shafting penisball.

Every player wants an early touch of the ball so they can settle into the game, particularly on a tricky away day. Almost six and a half minutes in, Bankes hasn’t had it since kick-off.

Leeds are keeping the ball near Brentford’s penalty area, patiently probing for an opportunity, when the ball is passed inside to Tyler Adams, who is being closed down from behind by Ivan Toney (both circled): 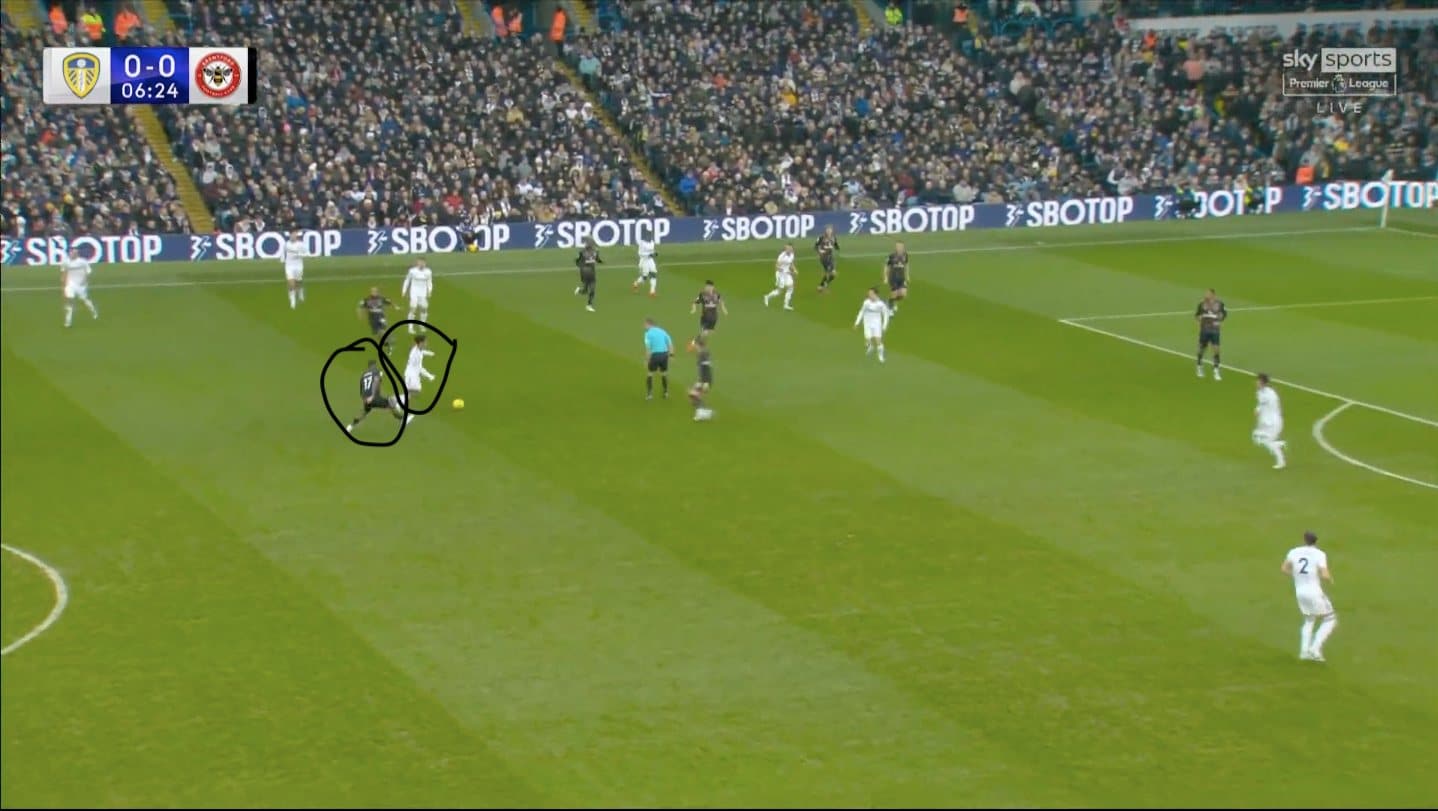 Brenden Aaronson has drifted into space in between two Brentford midfielders, but Bankes intelligently fills the gap in between, blocking Adams’ pass to his international teammate. Bankes can’t keep hold of the ball, which ricochets back to Adams, but the threat has been averted and Leeds’ attack eventually breaks down: 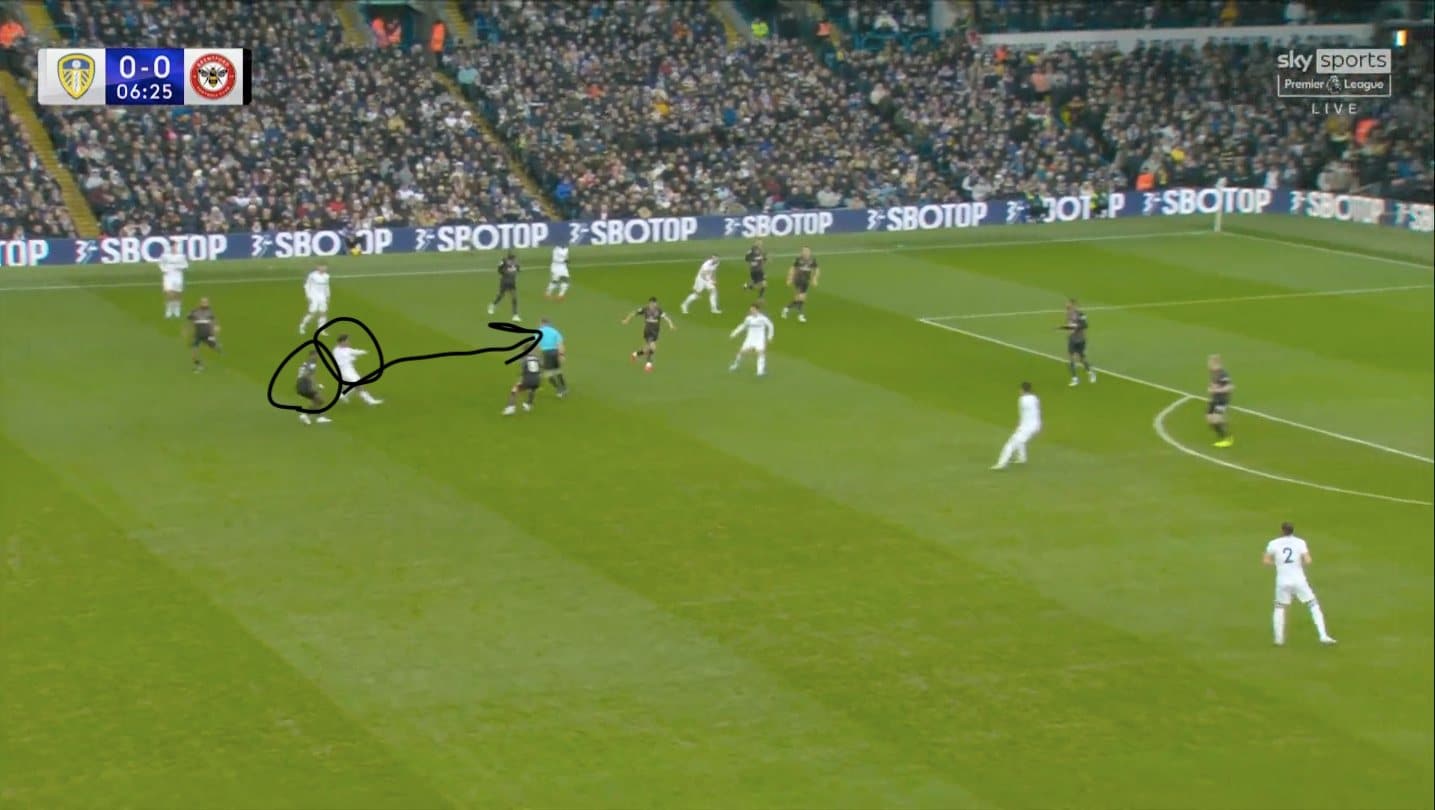 Later in the first half, Brentford had just created their best chance so far when Toney flicked on a cross to Rico Henry at the back post. Henry opted for a pass rather than a shot across goal, which was blocked by Robin Koch.

Leeds have once again established possession in Brentford’s half when a cross is cleared to Marc Roca on the edge of the box. A loose touch allows Christian Norgaard to get his foot in: 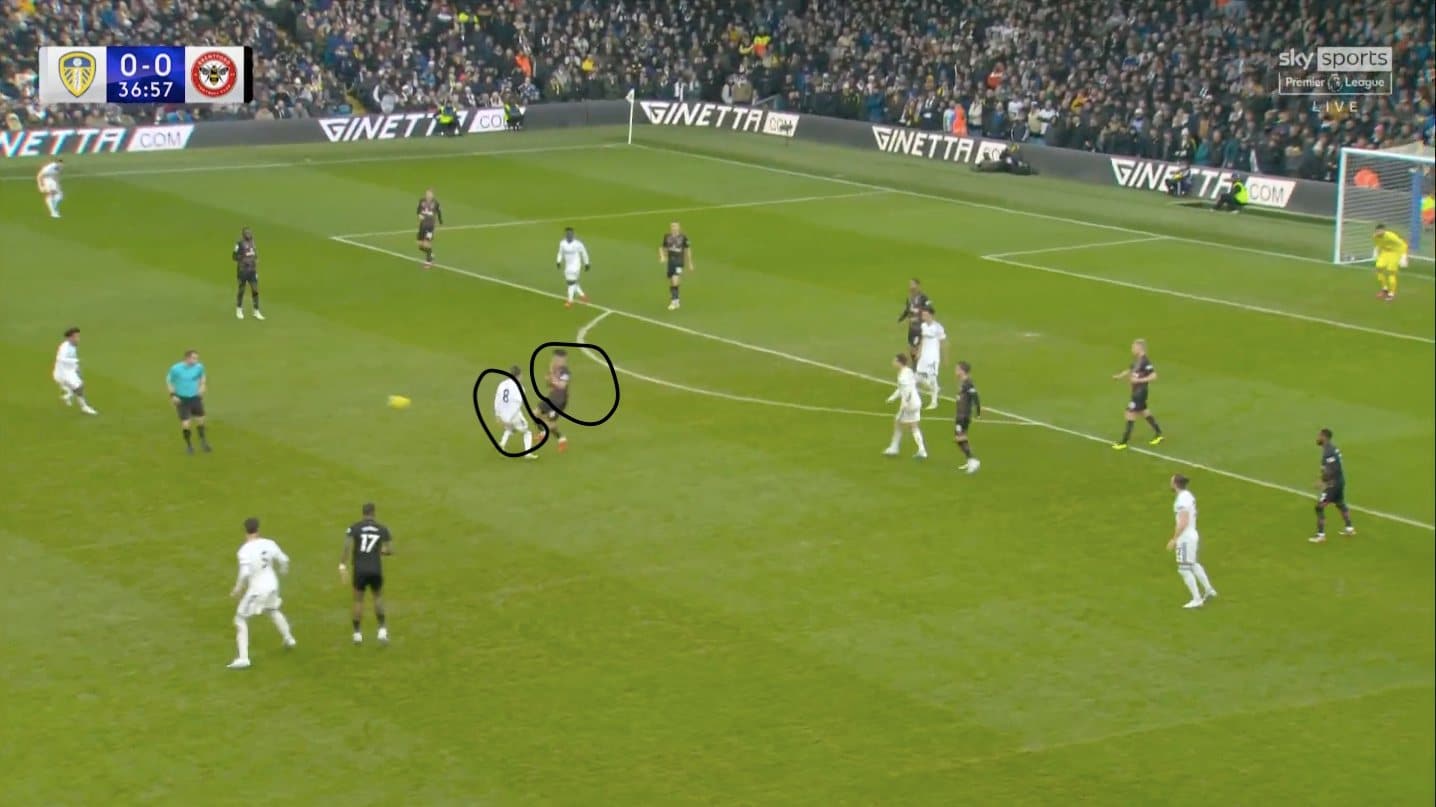 Norgaard’s block is travelling towards Adams, but Bankes nonchalantly returns the ball to the Brentford midfielder by turning his back so it bounces off him into a one-two. Adams must have admired such instinctive positional sense: 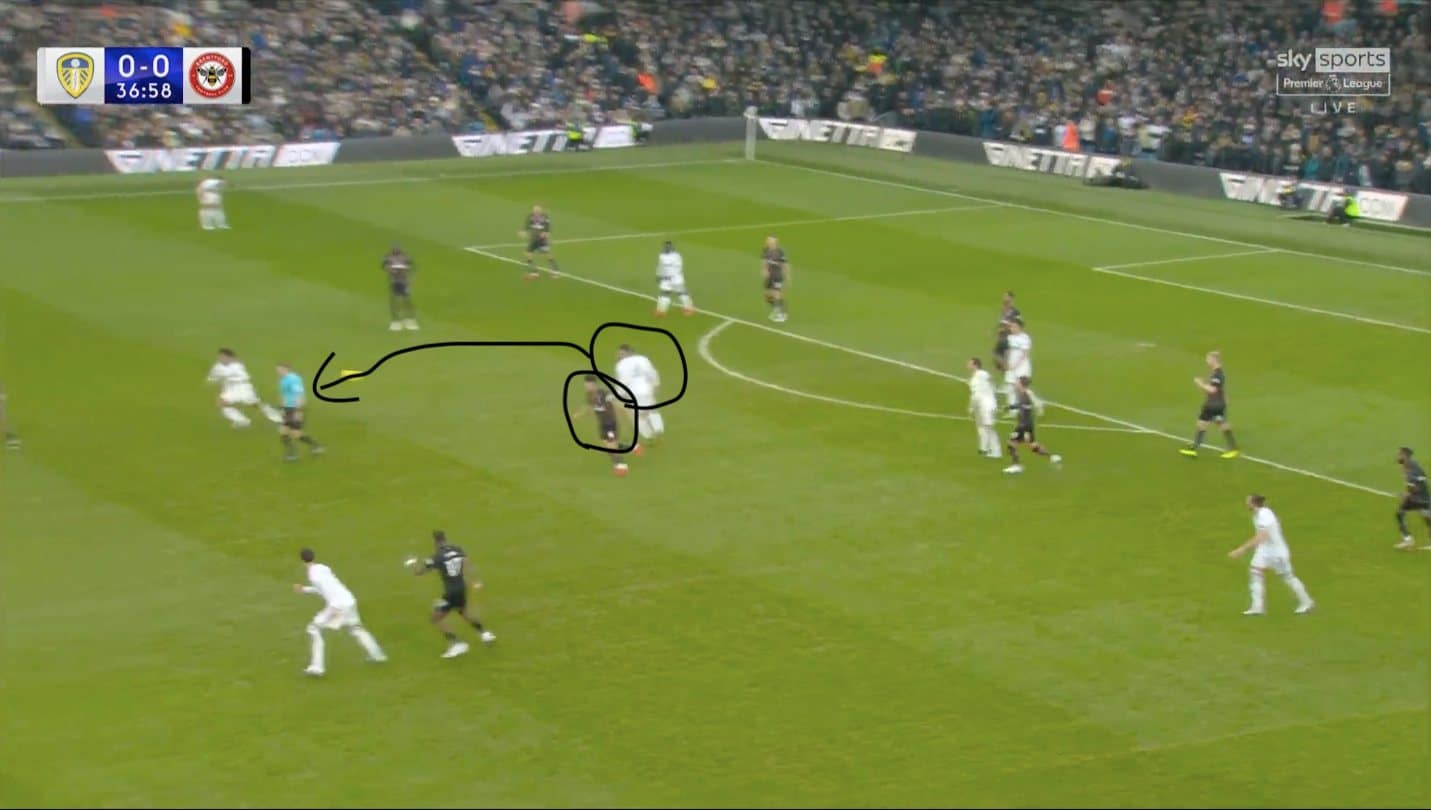 Into the second half, and Elland Road has started singing, ‘We only get shit refs,’ after Bankes books Rodrigo for dissent. Luke Ayling wins the ball back in his own half and passes the ball forward towards Wilf Gnonto, inviting Gnonto into a duel with Norgaard: 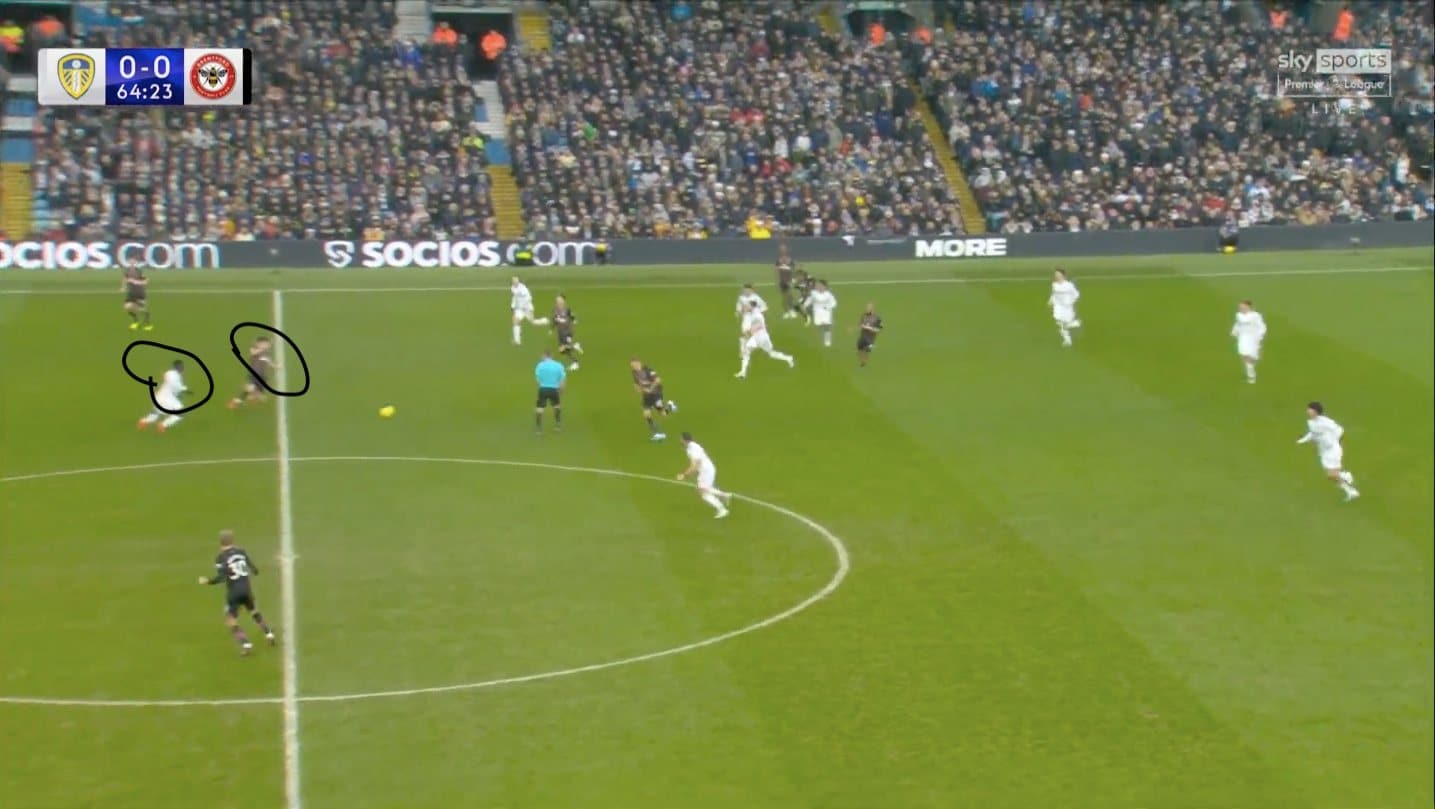 Norgaard gets there first and slides in to win the ball. His clearance is heading back towards Ayling when Bankes blocks it at an uncomfortable height around his belt line. Gnonto gets to the rebound, but Bankes stops play to let Brentford have an uncontested drop ball. Ayling is getting fed up of this pesky presence in the opposition’s midfield, pointing his finger in Bankes’ face, while Adams politely inquires why Leeds aren’t allowed the ball: 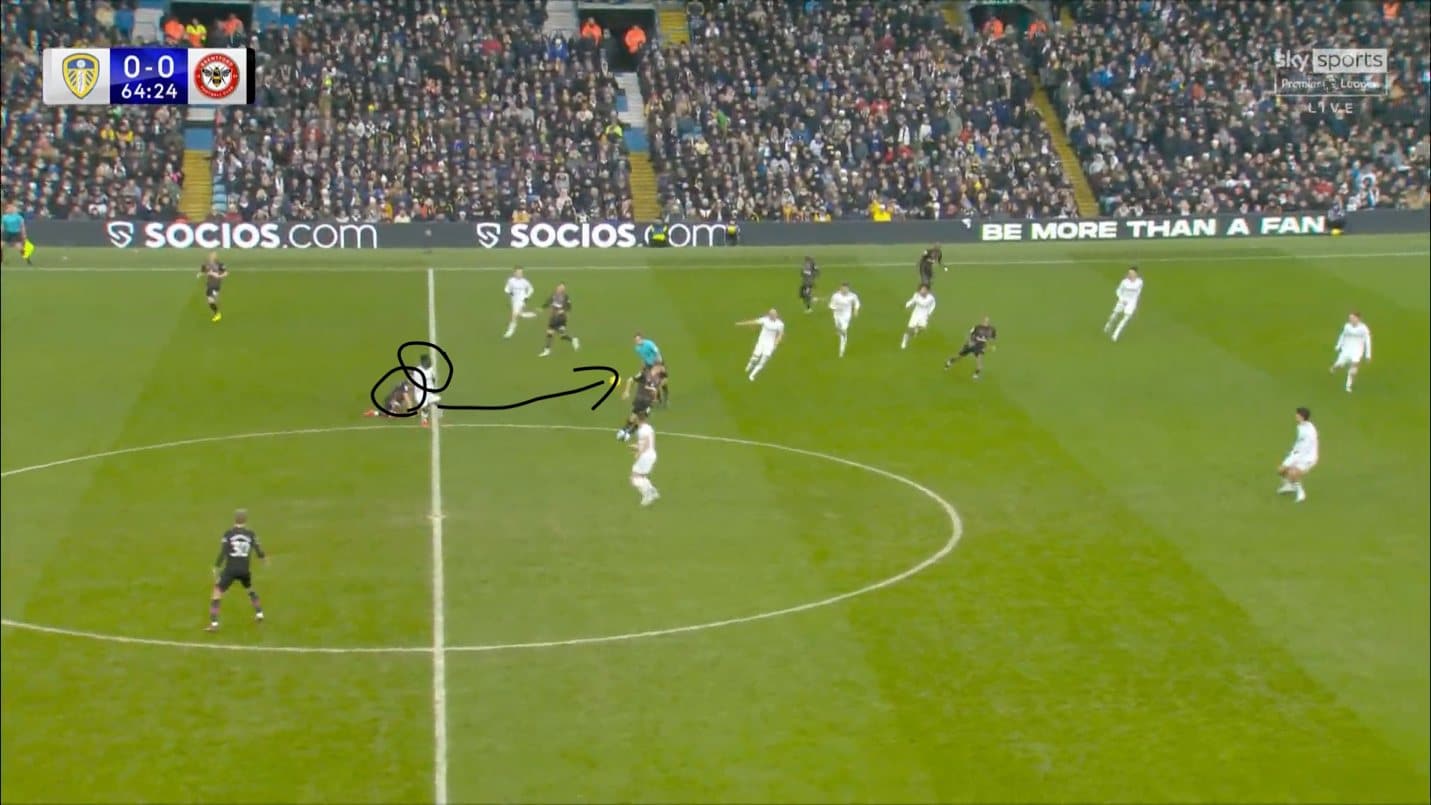 Into stoppage-time, Toney has just looped a scruffy header wide. He’s back causing Robin Koch problems, breaking through attempted tackles from Koch and Adams before the ball rolls between Toney and Sam Greenwood, defending on the edge of Leeds’ penalty area: 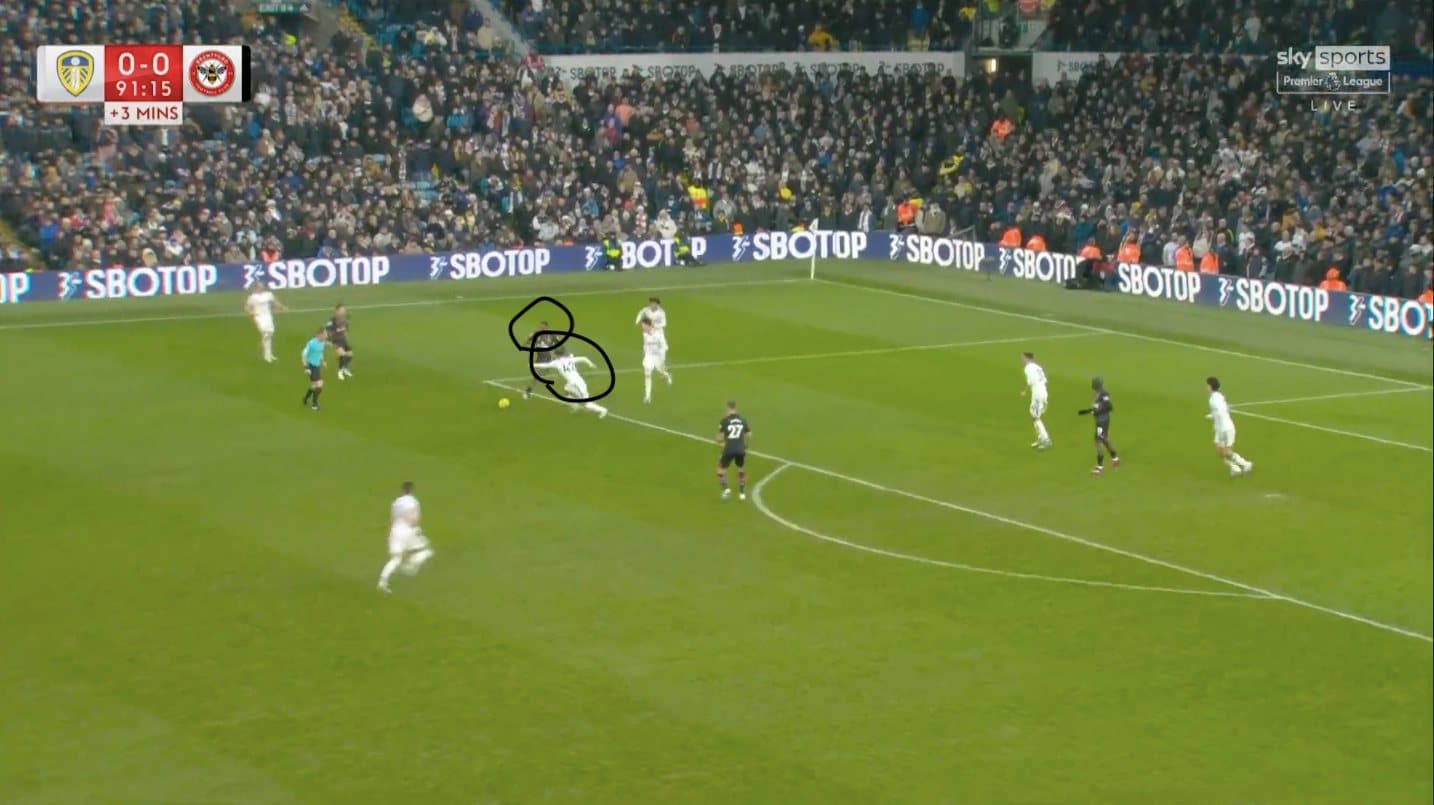 Even though there’s less than two minutes remaining, Bankes can’t switch off so late in the game. Greenwood blocks Toney’s attempted pass, which cannons into Bankes’ midriff. He stands still, as if nothing has happened, and lets Brentford keep playing even though it was a Leeds player who got the last touch. Pascal Struijk intercepts and clears for Pat Bamford to chase, but Bankes gets back quickly to help Brentford regroup: 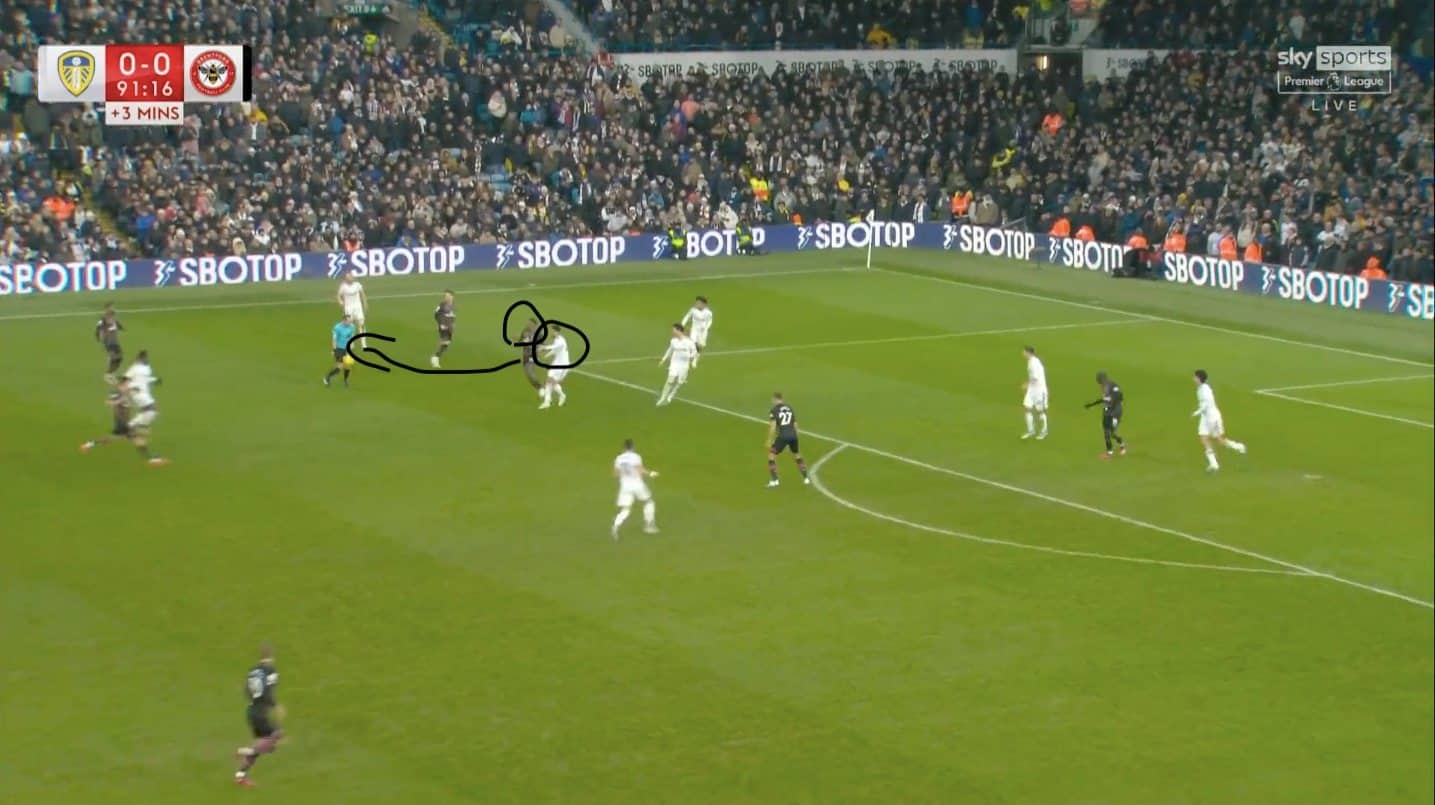 Upon the last of Bankes’ four interceptions, Phil Hay tweeted: ‘How many times has the ball hit the referee today?’ The responses ranged from ‘not enough’ to ‘1,205 at the last count’. If Leeds are still wanting to strengthen their midfield in January, they might just have found the perfect person, if they can tempt him away from the Bees. ⬢