Become what you believe

Arsenal 2-1 Leeds United: Something about believing 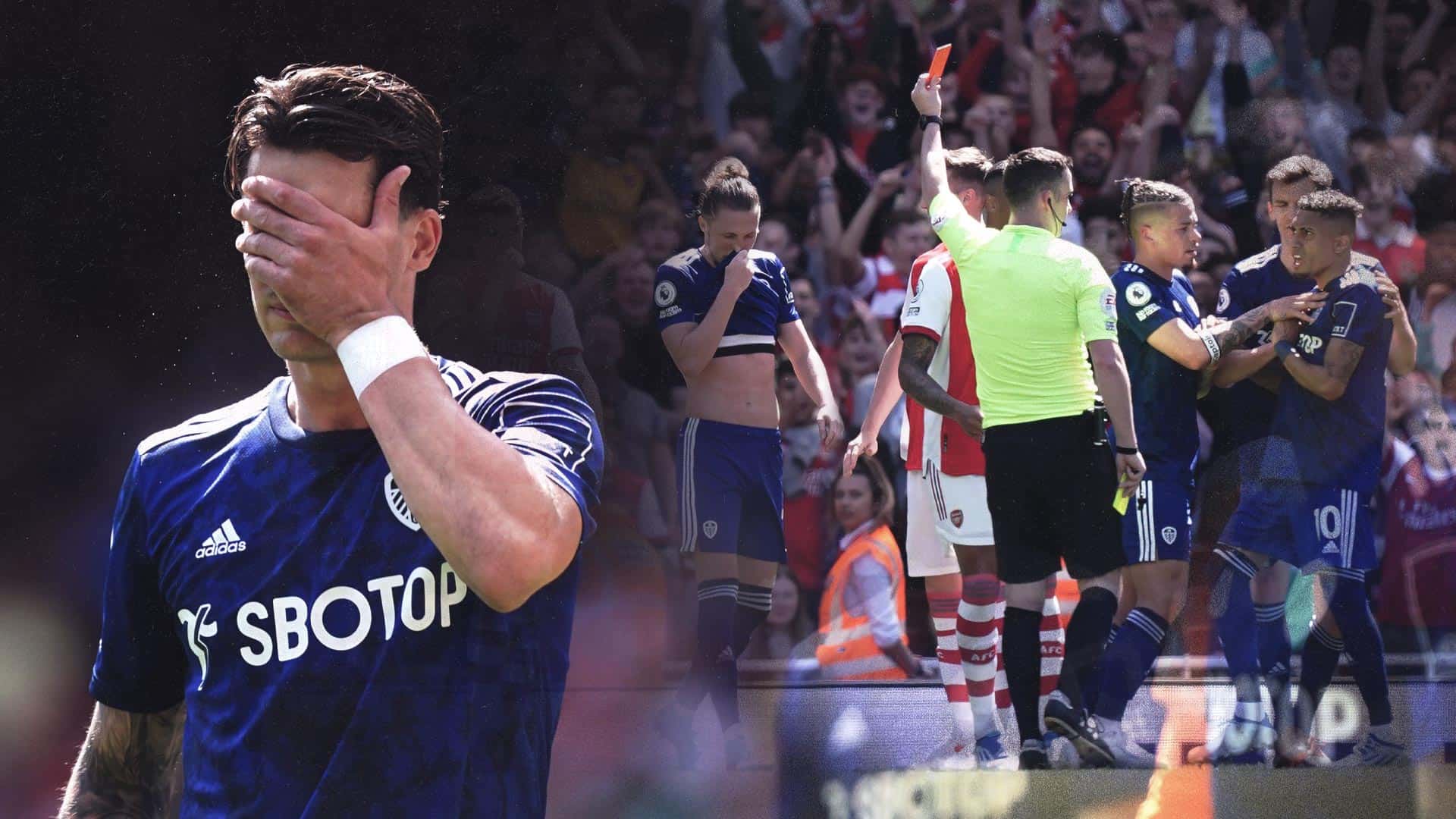 It’s funny what lies we tell ourselves about football. First, that any of it matters, that we should be angry about winning or losing. Everything we think is meaning has been manufactured for sale, and television commentaries are now completely unhitched from reality, two hours of dwelling in hypotheticals so you can be mad about them even if they don’t happen. If X happens, it will be the worst since Y, and you should definitely tweet at Z to let them know how angry you’ll be if it happens, because broadcasters have sold adverts based on social media engagement and they need the numbers. The name of the player on the ball? Why do you care, while we’re giving you twenty reasons why the game should make you feel upset?

More specifically are things like this, from Jackie Harrison’s post match interview after Leeds United’s defeat at Arsenal. He was asked, how important is having ‘the leadership of Jesse’, and how is Marsch keeping the belief in the side? “Yeah exactly,” said Harrison, “he showed a quote from Gandhi before the game, about having belief, and that’s the most important thing for us, is just having belief, and everything else comes after that, staying together and the tactics.”

What actually came after seeing that motivating quote from Gandhi, within ten minutes of this week’s preparation becoming action, was Leeds United going 2-0 down to Arsenal and getting trapped in their defensive third. The Peacocks had a back four and a midfield double pivot so Arsenal just put red shirts in the channels between them and watched Leeds play themselves into their own corners. It took Luke Ayling another twenty minutes to find the only way out, storming two-footed through Gabriel Martinelli’s legs and being sent to sit in the changing rooms. Well. At least Harrison could be positive about how Marsch led them into the game. I guess we have to imagine how bad it could have been without that Gandhi quote.

Of course, delusion and blind faith applied where Marcelo Bielsa walked, too, but reality came for him and they sacked him. That’s why it’s Jesse Marsch, giving another exclusive to Sky Sports before this game, talking about competing for Europe ‘consistently’ in three years with players developed from the Academy. (Coincidentally, thanks to Chelsea, our Under-23s were relegated on Sunday afternoon while the first team were dropping into the Premier League bottom three.) I don’t think we were ever so publicly fanciful before, outside the boardroom at least.

The result of this match isn’t worth much more than a shrug. We haven’t beaten Arsenal for years, and have conceded loads of goals to them last season, this season, whenever they want. They got two here because Illan Meslier, a trapeze genius and still my player of the season, succumbed to the high-wire fall that comes for all goalkeepers, letting Eddie Nketiah tackle himself a goal. Our ungrateful former loanee got the second as Arsenal chopped United’s defence up at will. Leeds do get some credit for stopping all this at two goals, and nicking one back when Diego Llorente was unmarked at a corner, and for making the Gunners sweat in the last few minutes.

The first half performance, though, was hopeless in ways that felt new, and that’s the worst thing about this game. Leeds have been bad enough different ways already this season, we don’t need to start with new ones now. But we can no longer tell ourselves that our reduced goal threat has been worth a tightened defence. We were lucky Arsenal didn’t score more than two, lucky we even got one. Arsenal had nineteen goal attempts. Leeds had three, starting with Llorente’s 66th minute goal. Getting the goals against column under control was a good idea. But the way Leeds attacked Arsenal, they had to find a way of pushing Arsenal onto minus one if they wanted to win. Pep Guardiola was onto something last weekend. “[Leeds] surprised me a bit,” he said, “playing with a five at the back, not being as aggressive as they normally are.” That all out attack, that meant teams like Manchester City had to alter their normal plans and brace themselves to face something unique in the Premier League (and then win 7-0 anyway, although we got them that one time), is gone.

For this writer the duel meaning of ‘hopeless’ hops up here. Leeds look hopeless, as in inept, in attack. It was pretty much the one thing that was working before Marsch came, up to the final touch, but now it looks as broken as the defence did. Leeds used to be a team that dominated possession, dictated attacks, but with a weakness for conceding sucker-punches on the counter. Under Marsch Leeds are conceding possession, and then when they concede a goal, they no longer know what paths to run down for an equaliser. Creativity is totally absent. This, incidentally, is what did for Marsch at the Leipzig franchise before they ‘parted ways’ in December. Julian Nagelsmann had built a possession based team, Marsch tried to switch them to countering, they conceded 31 goals in 21 games, won eight drew four lost nine. “We finally got a set-piece goal, so that’s a positive moving forwards,” said Marsch after the Arsenal game, and, I mean, I guess. But it feels pretty meagre. “That’s our situation right now,” he added, and yeah, I suppose that too.

That also leaves us hopeless, as in without hope, and hope was the one god damn thing we ever wanted in all the years in the Championship. It’s why we can still remember Thomas Christiansen fondly: all those unexpected wins, the surge to the top of the table, and feeling like there was hope. This season hope was the one thing remaining from our exhilarating rise. That bewildering feeling from 2018/19’s improbable wins against Aston Villa and Blackburn was still recognisable in the 24 second comeback two and a half months ago against Scum. Then we did it to Norwich and we did it Wolves, and whatever the hell has been wrong with Leeds United all this season, it was still there when we needed it, this mad hope that even in the worst circumstances we might still score loads of goals and win. And it wasn’t even mad hope or blind faith, it happened and we saw it with our eyes. Now, if that was delusion, it was the kind you could really believe in. No wonder we were so happy for so long.

But hope needed a team that believed in its own attacking prowess past the point of credible faith into the absurd realm where impossible dreams came true. Have we got something left in the tank to get us out of a nightmare? What Leeds have been since their post-Watford break is a team that has fewer ideas about how to go forward with every passing week. Successful teams concentrate on attacking because, when you strip away all the nonsense, football is about scoring more goals than the other team. I no longer know what Leeds are trying to achieve in the other team’s half, but then, I haven’t seen much of them there lately. While we’re in our own half so much, our own penalty area, I don’t trust us not to concede. So we’d better come up with something about the other end, fast.

What Leeds have to achieve now is pretty simple. Just get enough league points from the remaining three games then stop, go away, shut up, leave me alone. Marsch is up for that too. “We’ve just got to turn around,” he said after the game, “find a way to stay strong, put a group on the pitch that’s going to do whatever it takes, like they did in the second half, and find a way to get our points.”

They might well do it and then Leeds will stay up and we can say that’s fine. But for a while there I was getting a lot more out of football than just a group on a pitch and a final score. I’m worried about us losing more than we bargained for, with or without relegation. But for now, Chelsea next, on Wednesday night, then Brighton then Brentford. Maybe it’ll all mean something again a week next Sunday. ⬢