The new millennium was, for Leeds United, dream land, in Europe anyway. Heroic qualification from the first Champions League group stage gave Leeds what Don Revie always wanted, a competitive fixture against Real Madrid at Elland Road, and although the game was lost 2-0, a 1-0 win away to Lazio kept Leeds hopeful of qualifying from this group stage, too. And who knew what might lie beyond that horizon? 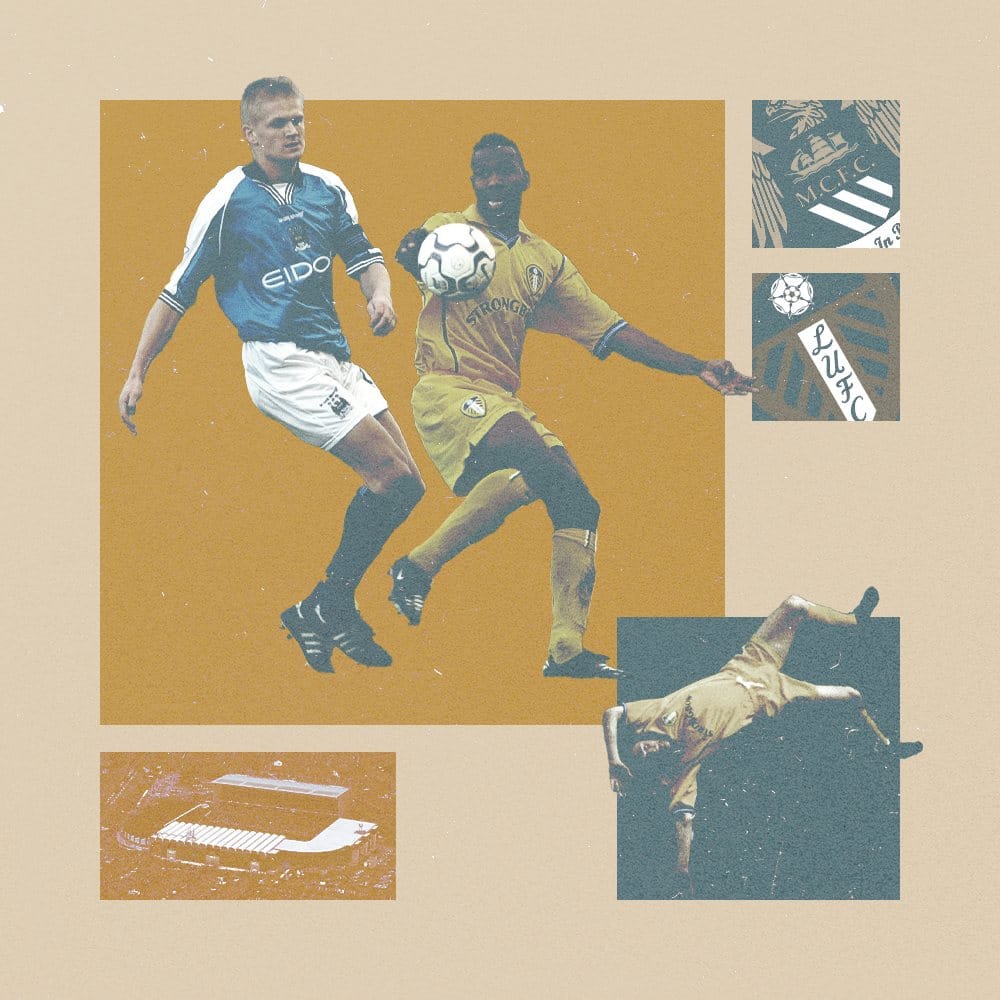 Where horizons were more limited, though, Leeds had more problems. Winning in Rome was one thing. Winning in Coventry, or Bradford, or London or Southampton, was another. United had won only one league game away from Elland Road, their first one, in Middlesbrough, and after a 3-1 defeat in Leicester on the eve of the Lazio match, they’d only won one of five league games anywhere. Flying so high in Europe had just earned manager David O’Leary a new pay package, including six years of share options valued up to £30m. To help generate that value chairman Peter Ridsdale had just departed on a ‘merchandising tour’ of Australia. But Leeds were 14th in the Premier League.

The old adage about being nice to people on the way up added more peril to United’s new year visit to Maine Road. Darren Huckerby had reasons to be puzzled, after being edged out of the competition for striking places, that Leeds had just signed Robbie Keane on loan from Inter. Then again, he was in an odd situation at City, coming in after their two-month experiment with George Weah. But he said he had no problem with the manager who signed him for Leeds, then sold him to City for half the price.

“Maybe I didn’t play as well as I could have done there but I didn’t feel I was given much of a chance,” he said. “When you are sitting in the stands and the team is not doing well, and you still don’t get back in, you begin to think that something is not right. It didn’t work out for me there and it was a wasted eighteen months.”

Now, though, he didn’t think Leeds could ignore their league form much longer. “There is no-one in the bottom half that is out of relegation worries, not even Leeds,” he said. “They are only six points ahead of us but we can close the gap by beating them.”

If Huckerby was mild, Alfie Haaland was smarting. He’d had assurances from O’Leary, he said, that his good form in United’s UEFA Cup campaign the previous season would keep him in the side. Instead he was dropped without a word, and sold to Manchester City without a handshake or a thank you. “I haven’t spoken to O’Leary since I left,” he said. “I went in the summer and he hasn’t rung me. He didn’t say goodbye. He does to some players but not me.”

It was still up to O’Leary, said Haaland, to prove he was worth his reputation and his wages.

“When he took over everything was in place for him because of the work George Graham had done,” he said. “All he had to do was add a finishing touch. Now, for the first time, he has to cope with things going against him. He can’t hide behind all those little phrases of his anymore. He has to produce the goods. I still live in Leeds and I know the fans are not happy about how things are going. All the talk about the next step and a possible title challenge hasn’t happened. The expectation is enormous and the vibes I get out on the street in Leeds are ones of disappointment.”

The vibes Haaland brought to any game were tenacity and determination, and the least surprising statistics from the match were bookings for the midfield four: Haaland and Danny Tiatto for City, Olivier Dacourt and Eirik Bakke for Leeds. Huckerby was unlikely to get involved in that, but wasn’t fit for the match anyway; another former Leeds player, Danny Granville, only lasted until half-time.

The problem for Haaland was that whatever was wrong with Leeds, City were capable of serving up worse. After thirty minutes of mediocrity from both teams, Andy Morrison mishit a free-kick out of his own half to the feet of Leeds’ winger Jason Wilcox. Once he was over his surprise, he ran towards Nicky Weaver, stranded in goal, and squared for Bakke to open the scoring.

It gave Leeds the advantage but not the impetus. Shaun Goater, Paulo Wanchope and substitute Paul Dickov couldn’t make much of City’s long ball attack on Rio Ferdinand and Lucas Radebe, but Haaland’s drive forced an excellent double save from young goalie Paul Robinson, who stopped the follow up from Wanchope. He had to be at his best to stop a shot from Tiatto, too. Leeds were the better team but City were determined not to let them show it, until Robbie Keane replaced Alan Smith for the last twenty minutes.

Keane’s first chance was a close range half-volley, well saved by Weaver, and it was Bowyer who secured the points with ten minutes left, finishing after Mark Viduka’s mazy run and cross from the right. That let Keane do his thing, taking a through ball from Bowyer and flicking past Weaver with one minute to go, grabbing another when given two tries in stoppage time when City failed to clear Wilcox’s corner. 4-0 was enough for the away fans to ask, ‘Alfie, what’s the score?’ and for the Mirror to try different headlines across its various editions: ‘It’s Haa Haa Haaland’, ‘No Laughing Matter For Alfie’, ‘What’s It All About Alfie?’, ‘Haa Haa, The Joke’s On Alfie’.

His manager, Joe Royle, arrived for the post-match press conference clutching a can of cider and sounding desperate. “Don’t write us off yet,” he said, “Please don’t write us off.”

O’Leary, while he wouldn’t agree with Haaland’s diagnosis of himself as the cause, wouldn’t deny that 4-0 was flattering, or that his side needed to improve. But with a win and a move up to 12th, he was seeing the positives.

“Our position in the league is a disgrace,” he said. “But I think it bodes well for next season because my players will learn from it. For the past couple of years it has been praise, praise for my players, and now they have had a knock back. I have wanted to see how they would react.”

Qualifying for the Champions League again would be difficult, but O’Leary didn’t think that would undo all the work his chairman was currently putting in with his potential commercial partners down under.

“If we are not in it, while financially it won’t be good for the club, it might stand us in good stead to show what we can do in the league. We should take it on the chin and say, let’s see how good we can do domestically.”

The next Champions League game, at home to Anderlecht, was still seven games away, including an FA Cup fourth round tie with Liverpool. For a few weeks, at least, European glory was again a distant dream. ◉