The argument about experience versus youth always hung around David O’Leary’s Leeds United. Manchester United manager Alex Ferguson was dismissing their title challenge: a club record ten consecutive wins was one thing, but the players were too young and inexperienced. O’Leary was happy enough with that. “I’m just a little boy compared with Sir Alex so don’t ask me to react to his comments,” he said. “I’m not going to get into mind games with him — I’m not that daft.”

How daft was Everton manager Walter Smith, picking this defence to play against United’s attacking three of Alan Smith, Michael Bridges and Harry Kewell? Dave Watson, mentioned in commentary as the ‘only’ player remaining from their great 1980s side. Less than a month from turning 38, his former teammate Gary Lineker had just taken over from Des Lynam on Match of the Day. Richard Gough, former Scotland captain, was Watson’s junior partner by five months. David Weir was at least the young side of thirty, aged 29 and five months; David Unsworth was a spring chicken, just turned 26. 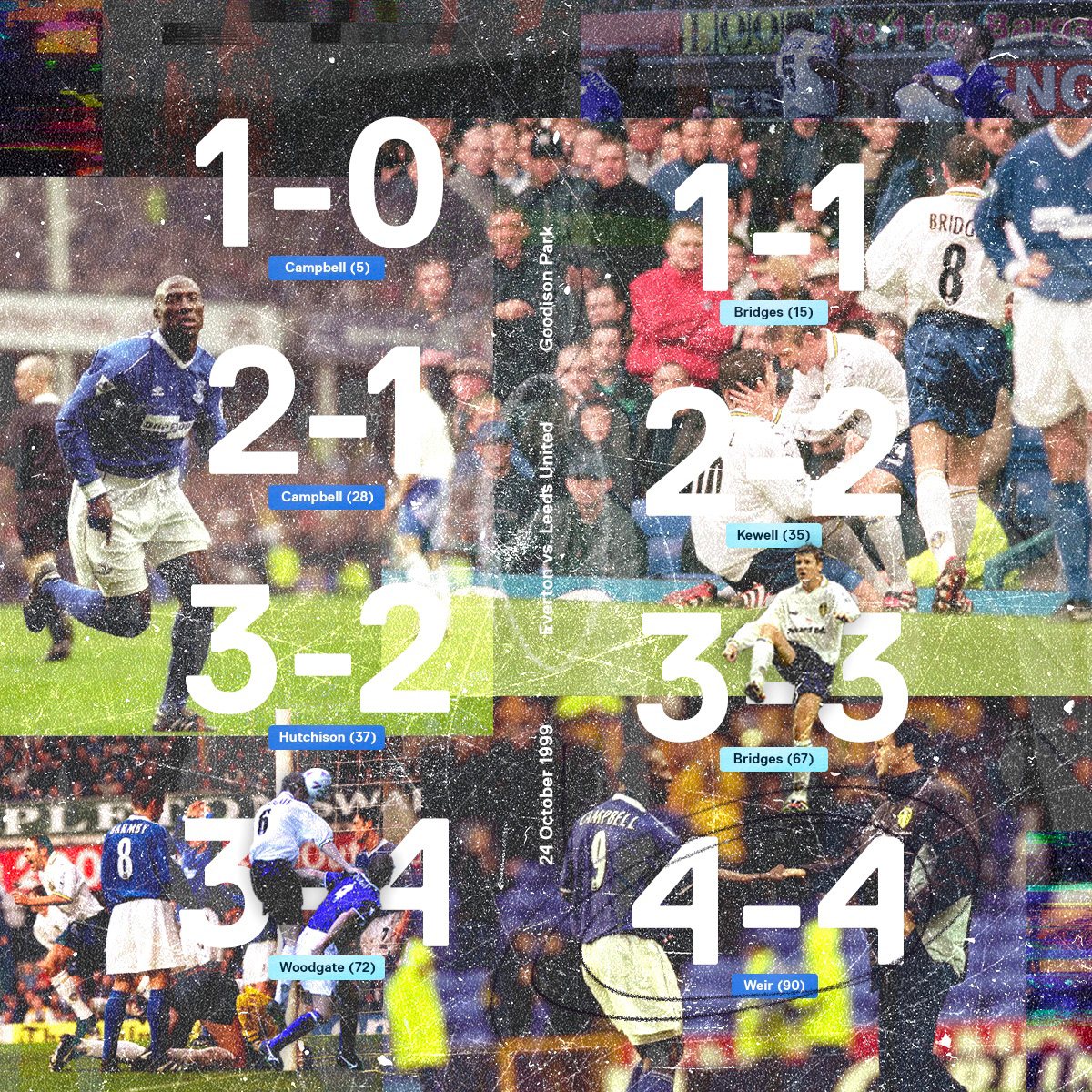 Smith, Bridges and Kewell’s combined ages came to less than Watson and Gough’s, but it was 29-year-old striker Kevin Campbell who set the tone for the day on four minutes. Gary Kelly tried clearing twice for Leeds but the ball kept coming back, the second time slipped precisely behind him by John Collins (aged 31) to Campbell, who hit his shot across Nigel Martyn into the top corner.

Leeds, with a midfield of Lee Bowyer, Stephen McPhail and David Batty behind the front three, were set up to reply. An equaliser came within ten minutes, Kewell’s low cross put in by Bridges at the back post, and they could have been ahead with an attack that summed up their best: Bowyer won a fierce tackle, passed to Bridges on the edge of the area, who dummied the ball; McPhail flicked the ball past one defender but was tackled by another before he could shoot. The old men could never keep up.

But Leeds couldn’t keep Everton out. Just before the half-hour Campbell scored again; a simple pass from Don Hutchinson put Campbell through to chip over Martyn. Kewell equalised when his cross drifted into the net over Paul Gerrard, but a few minutes later when a long throw bounced into United’s penalty area Hutchinson made it 3-2 while Kelly and Lucas Radebe barged into each other. “We try to win games,” O’Leary said later, “and sometimes we try to help the other team as well.”

The second half started with Hutchinson leading Everton’s attempt to put the game out of United’s reach, going close twice then going down under Radebe’s challenge when through one on one. Everyone saw a foul and a red card except referee Dermot Gallagher, who waved play on. Any other outcome — either Hutchinson scoring, or Radebe going off — would have given Everton the game.

Instead a five minute spell swung it to Leeds. First, Michael Bridges scored one of the goals of his career. Controlling a pass on his chest, he passed it wide to Darren Huckerby, who had just come on. Huckerby seemed to mishit his cross and the ball went back to Bridges on the edge of the box, slightly behind him. He controlled it with his right outstep, bouncing the ball into the air, and as it dropped, the same foot volleyed the ball on a gorgeous arc into the far top corner of the net. He just put his hand in the air as if he’d do it again tomorrow.

The goal that put Leeds ahead for the first time was more mundane. Ian Harte’s vicious free-kick from the right was tipped over, so he went to the left, took the corner, and Jonathan Woodgate got above Gough and headed straight in. A few weeks earlier Leeds had traded goals at Coventry until winning 4-3; it wasn’t the easiest way to win games, but Leeds would take it.

The story of Woodgate versus Gough, however, didn’t end there. First came Gough, and Watson, versus Huckerby. Huckerby’s pace was O’Leary’s new favourite supersub gambit, and he took great delight in running at the two near 40-year-olds at the heart of Everton’s defence. But if he beat one, he could never beat the other. Their legs might be going but their heads were filled with memories of games played against the likes of Huckerby, and the way they dealt with him was a triumph of intelligent positioning. One would hold him up, the other would block his routes, and Leeds couldn’t score a fifth.

What was in Jonathan Woodgate’s head? Lee Bowyer was wondering that when, after Leeds settled into keeping the ball in the corners as the clock ticked towards ninety, they won a free-kick on the wing then a corner kick. Woodgate dutifully trotted forward, ready to score another header, and when Bowyer spotted him, he went mad. We’re keeping it in the corner, he was yelling, get back and defend. Woodgate just stood there, not getting the message.

Eventually he went back after Leeds lost the ball, but when Richard Gough came charging forward towards United’s corner, Woodgate failed to realise that a 37-year-old centre-back was only a limited threat on the left wing, charged towards him, and clattered him. Everton packed the penalty area and, from Unsworth’s crossed free-kick, Martyn came but didn’t collect, Woodgate ran under the ball, and his man, David Weir, was left unmarked at the back post. Weir knew what he was doing, heading for 4-4.

It’s the characteristic tension of sport. When they’re young, athletes have the body but not the knowledge. By the time they learn, they no longer have the body to make the most of their experience. With four goals each Leeds and Everton found their strange balance. ◉