After a Champions League semi-final, and a 2001 to rival any team in the Premier League — 39 played, just four lost — grasping upwards for 4th at Easter 2002 instead of cruising to a title had Leeds United looking for answers, or scapegoats. 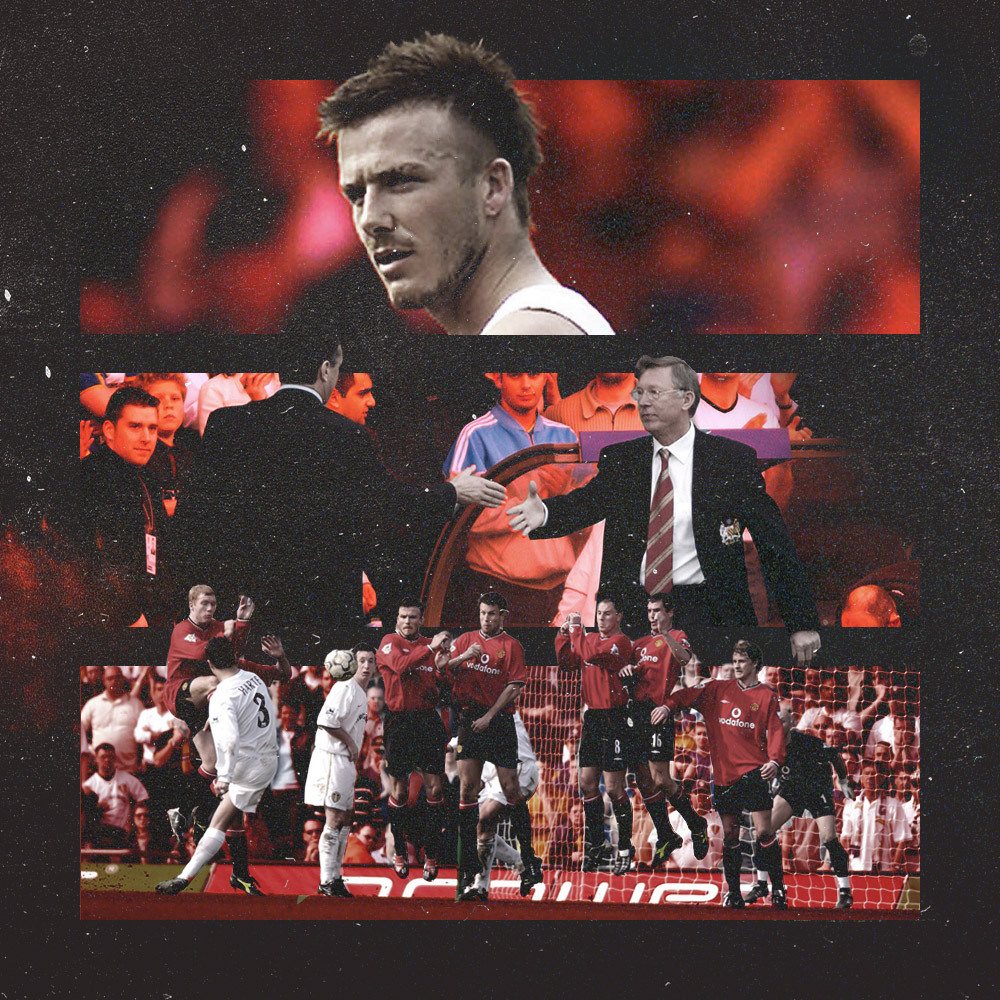 Step forward Brian Kidd. The Leeds coach was used to occupying divisive positions: he’d grown up at Manchester United, playing for them 264 times, then added 128 games and 57 goals for Manchester City. After restoring himself as part of the Old Trafford furniture as Alex Ferguson’s assistant, he’d moved to Leeds after relegating Blackburn. First he was directing youth development but then, a week before Leeds hosted Manchester United in March 2001, he was promoted to first team coach. Eddie Gray still had the title of assistant manager, but he no longer had the seat next to David O’Leary on the bench. Some were suspicious that, with Ferguson due to retire, O’Leary was becoming more concerned about how he and his staff would look in the home dugouts at Old Trafford, where Gray would surely not follow.

The primary concern in Yorkshire was what, if anything, Kidd was doing to the most exciting young team in Europe. Europe, apparently, was O’Leary and Kidd’s new concentration; Leeds’ all-action all-pressing style was good enough for the Premier League, but they felt more maturity and more possession was needed at the next level. Never mind that the old way of playing took Leeds past Europe’s elite to within one game of the Champions League final, and the new way ended with a 1-0 aggregate defeat to PSV Eindhoven in the fourth round of the UEFA Cup.

It had also slowed progress in the league, although from outside, it could be hard to tell. A 3-0 win over West Ham on New Year’s Day put Leeds top, and matching the second half of 2000/01, they’d only lost twice in the first half of 2001/02. But fourteen wins out of nineteen had faded into eleven out of 21, so eight draws, including 0-0s with West Ham, Bolton, Chelsea and Fulham. Then 2002 really got going in earnest: three defeats and four draws, and failure to score against Chelsea, Charlton, Everton and Liverpool — who beat Leeds 4-0. In the 0-0 draw at Goodison Park the fans were clear: if what Brian Kidd was doing wasn’t part of an Old Trafford plot, that almost made it worse.

Leeds’ players weren’t having it. Captain Rio Ferdinand, with Nigel Martyn for seniority and Alan Smith for Leeds-til-he-dies authenticity, called a press conference to declare the squad’s support for Kidd. “If we could have fitted in, there would have been 30 of us here,” said Ferdinand. At least six of them would have been strikers, but we’ll come back to that.

O’Leary’s response was curious. In December he’d faced down a revolt from his squad, his chairman and his PLC after serialising his book, ‘Leeds United On Trial’, within days of the end of the trial he said the book wasn’t about. Now, as the players united around Kidd, he decided it was time to get more involved in training.

“Brian’s sessions are interesting,” he said. “But if he is one per cent short from being the complete coach, it is that he could be a little bit more confrontational with players. He lets them get away with things that I don’t think he should.”

The general consensus in football was that Leeds’ players had been getting away with too much. First there was the fallout from the trial, which had chairman Peter Ridsdale seizing what he thought was a chance to repair things in the dressing room before the game at Leicester, bursting in to tell Jonathan Woodgate he was back in the England squad — it fell to others to tell Woodgate the opposite was true, and England were not considering him for World Cup duty as a result of his conviction at the trial, not to mention a six-month driving ban just handed down for his fourth speeding offence. Then there was behaviour on the pitch: Alan Smith had missed eight games through suspension, and for the visit of Manchester United, Lee Bowyer was just coming back from a six-game ban. It had almost been more, but an FA tribunal let him off for clashing with Graeme Le Saux.

But O’Leary’s return brought three successive wins, over Ipswich, Blackburn and Leicester, so he kept Bowyer on the bench against Manchester United. They’d just been beaten by Middlesbrough and Alex Ferguson couldn’t allow any more mistakes in their pursuit of league leading Arsenal. “The bottom line is that we can’t afford a draw at Leeds – we have to win. It’s as simple as that,” he said.

Leeds, for their part, looked ready for the gung-ho, with Mark Viduka and Robbie Fowler up front, Smith and Harry Kewell on the wings. But that didn’t last more than three minutes, thanks to Nicky Butt’s studs leaving six stitches worth of gash in Kewell’s ankle. Kewell didn’t like it — sitting on the pitch while the referee delayed the physio until first the boot coming off, and then the sock, and two solid minutes of whining, made him cave in. Kewell was patched up and told to play on, but was limping moodily around on Leeds’ left when, with eight minutes played, Manchester United took advantage down the right.

Paul Scholes was well aware that right-back Danny Mills had been sucked inside, and diverted a pass to the left wing for his full-back, Mikael Silvestre. Now seeing the danger, Mills got his head down and sprinted at him, a gambit easily avoided with a simple step inside. Scholes was now on the penalty spot to take the pass and hammer in the first goal.

Kewell finally went off and Bowyer came on, and his determination had Leeds level before the twenty minute mark. Getting the ball deep in midfield, he saw a long corridor ahead of him, and although Fowler pointed out passing options here and there, Bowyer was fixed on forcing Laurent Blanc back to the edge of his penalty area. Then a pass beyond him got past Gary Neville, too, who fell to the ground and out of Mark Viduka’s way, the big striker running in from the left and slipping the ball calmly past Fabien Barthez.

It was the only time Viduka could get free, and that was the problem for Leeds going forward. Every pass was aimed into his feet, hoping he could find a lay-off or a backheel for a runner, but every attempt and failure showed that all the imagination in Leeds’ team had left with Kewell. Viduka, Fowler and Smith should have meant goals, goals, goals, but Smith was in midfield with Bowyer, Seth Johnson and David Batty, and that meant Leeds were dour, dour, dour.

And Smith’s preference for running inside to be with Viduka meant Mills was exposed, although lack of cover was no excuse for his gormless collision with Woodgate as the centre-back tried to head clear. Giggs backheeled the loose ball to Scholes, Nigel Martyn parried his shot to Ole Solskjaer, and from six yards he couldn’t miss. Give it two minutes, and Leeds were beaten again, down the same side again, Mills marking nobody as Silvestre jogged past him onto Scholes’ pass, Woodgate and Dominic Matteo getting fooled by Giggs in the middle and leaving Solskjaer to make it 3-1. Rio Ferdinand had failed a fitness test, and it showed.

Embarrassment looked total ten minutes into the second half, although at least this time a different full-back bore the brunt. With his teammates so focused on humiliating Mills, David Beckham’s advantages over Ian Harte had been left idle on the other side, until Harte was left trailing behind Beckham on a sixty yard run to the edge of Leeds’ penalty area. Harte was blowing before they crossed halfway; Giggs met Beckham’s cut back and made it 4-1.

A Ronny Johnsen header hit the bar before Harte redeemed himself and gave Leeds some hope. Using Fowler to block Barthez’s view, Harte shot a free-kick into the top corner as if the goalkeeper and his wall were just fantasies. Eirik Bakke came on for Batty, Robbie Keane came on for Seth Johnson, and Leeds tried making themselves respectable, while Mills tried taking Scholes head off with his boot.

Keane had a chance within five minutes, picked out by Bakke for a free header, sent wide, with Fowler just behind him. Viduka had teed Bakke up to cross and as Leeds’ forward momentum grew, one wondered about the balance of this squad and the thinking behind not only its transfer policy, but its coaching. At one end Leeds had Viduka, Fowler, Keane and Smith, with Kewell on the sidelines; Michael Bridges was in the treatment room. And yet Kidd and O’Leary had shifted the emphasis to the other end, trying to build from the back with Woodgate, Matteo, Harte and Mills. Four good defenders, sure, with the absent Ferdinand a class above and Lucas Radebe a legend, but wouldn’t anyone look at the riches spent and acquired at the other end of the pitch and think more about outscoring the opposition than keeping things tight, of attack as the best form of defence? In all competitions Leeds had notched up thirteen games in which they didn’t score, and with this squad, it felt like a perverse achievement.

That said, all the pressure and all the strikers only brought one more goal here. Keane broke strongly down the right, pulling back for Fowler, whose first time shot was badly miscued; but Bowyer was ready, sticking his head on the ball before it flew wide and scoring past Barthez. In the last ten minutes, though, all Leeds could produce were an identikit free-kick from Harte, this time just a yard or so off-target, and the sort of snapshot volley by Smith that made you want to tell him to get back in midfield.

“We gifted them what I’d call walk-in goals,” said O’Leary. “A few at the back played very poorly and in big games like these you can’t afford to gift people goals through bad defending.” True enough. But as the Easter weekend’s results sent Leeds slipping down to 6th behind Chelsea, six points behind 4th placed Newcastle and their game in hand, what was happening on the training pitch to change things? ◉