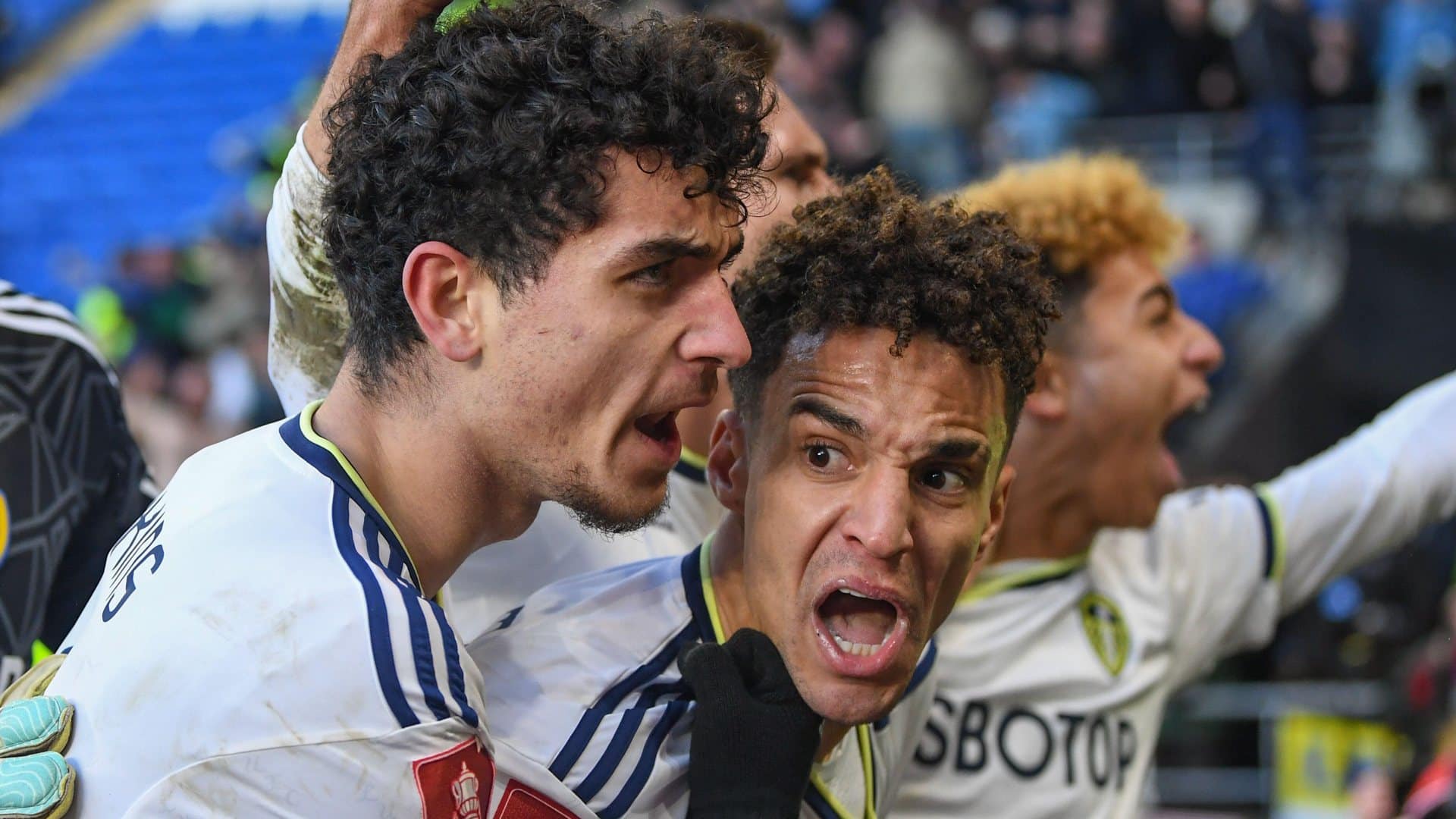 Should have known, really! Should have known. There was a bit, a short time before kick-off, perusing Cardiff City’s team news, comparing their new stadium to the old and angry Ninian Park, thinking about the quality that exists in Leeds United’s Premier League squad, when I thought: this might be fine. This game could be simple. Leeds could calmly win 3-0. Our opponents, from the bottom of the Championship, were ill and understrength. Leeds United were also understrength. And it was them who made me sick.

There was not much to object to in United’s starting line-up, especially once Jesse Marsch reeled off the list of muscular injuries affecting absent players. But sure, give Junior Firpo a shot, bring Rasmus Kristensen back, try Darko Gyabi in midfield, give Joe Gelhardt some playing time, put Pascal Struijk to centre-back — and captain. All moves with merit. But on top of the changes, Marsch asked them to play like… like what the heck?

I’m sure those weren’t his exact instructions, but that was the result. The instructions were more along the lines of Firpo, Struijk and Diego Llorente forming a back three, while Kristensen stretched the definition of wing-back by pushing right up to the forward line. There were some moments, a Gyabi shot zipping by the post, and him dribbling into the penalty area; Wilf Gnonto was booked for diving when he could have set up a goal, a Crysencio Summerville cross lacked a head, Gnonto’s head lacked direction when he put Sam Greenwood’s corner high over the bar.

But none of this was because the tactical plan was working. The first point of failure was the lack of quality on the ball both to and from Kristensen. Passes kept going in his direction, but they either missed him, or he couldn’t control them, or if he got them, he couldn’t do anything useful. Pushing a wing-back forward as extra attacker is one of those ideas that looks great on a chalkboard, but on the pitch, it means constantly setting up dangerous positions with the ball at the feet of the least dangerous attacking player. Why put all the forward play through Kristensen, when you could be giving the ball to Gnonto or Summerville? And where had they gone, anyway? Vaguely to Kristensen’s left, along with Joe Gelhardt and Brenden Aaronson, four attackers being bypassed to feed the right-back, while they ran into each other, getting in each other’s way. Gelhardt, the deputy number nine desperate to thrive, had one touch in the penalty area.

Cardiff didn’t pose much danger because they’re not a good team and this was their second string anyway, but that’s all they needed to lead 2-0 at half-time. For the first goal, as they broke on Leeds’ left, the shuffle to a back four as Kristensen ran back to defend left Struijk marking two, one of whom he seemed to be leaving to Llorente, who had no idea this was the plan. Joel Robles stopped the first shot but Cardiff kept the ball alive and Jaden Philogene scored while Leeds scrambled. For the second, Cardiff profited from a simple tactic they tried a lot: chipping the ball just slightly over our defenders, so they weren’t sure whether to backpedal or duck and ended up spinning to face goal. Llorente got a slight touch on Andy Rinomhota’s chip to Sheyi Ojo, who controlled on his chest and shot smartly in. Leeds had 6,000 fans in Cardiff, just like the Championship days, booing them off at half-time, just like the Championship days.

At half-time Marsch didn’t change the players but he tweaked the plan. Three at the back was abandoned and Firpo joined Kristensen up front, an orthodox Marsch idea — pushing both full-backs forward, leaving two centre-backs behind — that has often been torn through in the Premier League. Cardiff weren’t pushing their luck hunting a third, though, and were comfortable enough until Marsch made substitutions. Gyabi had faded alongside Greenwood in midfield, meaning Leeds were missing every second ball, and the surprise solution to this was January’s answer to our left-back problem, Max Wöber, providing strength and energy in the middle. Cody Drameh improved things at right wing-back by receiving and using the ball better than Kristensen, while Rodrigo, on for Summerville, impressed by sheer force of quality, making runs off the ball that were full of potent intent.

This was how the game should have been from the start. Put ‘only Cardiff’ asterisks on Firpo and Rodrigo if you like, but for the last half-hour they had the leadership to let the ability they showed in La Liga change the game. Credit to Sam Greenwood, too. Struijk, for whom Cardiff and memories of Lee Tomlin must be his nightmare, headed one Greenwood corner wide of a huge empty space between the posts. From another, Greenwood thought quickly, got the ball short and turned and crossed for Rodrigo to head in, the other player awake to the idea. Then Firpo, whose wing-back play involved driving in from the wing with the ball, did that, getting a pass via sub Mateo Joseph into the box for Rodrigo. His low cross shot was saved and Firpo was in the business of burying the rebound when Joel Bagan stopped it with his fist. Maybe Firpo should have taken the penalty, too, because Rodrigo hit it too close to goalie Jak Alnwick.

Bagan was sent off, and Leeds still had ten minutes plus five of stoppage time, and used pretty much every one. Joseph should have equalised when Rodrigo reached a pass at the byline and crossed. That shot went over the bar. Another young sub, Sonny Perkins, was the hero instead, Gnonto dribbling to the byline, pulling back, Firpo backheeling into the six yard box, yes really and yes I know, and Perkins nicking in front of the keeper to score. Limbs? In the away end, yes. Perkins first turned a face of guilt at the assistant, worrying about being offside, then looked sternly around him, as if wondering why any of this had been necessary.

Marsch, meanwhile, sat down on a coolbox, looking as mystified as he sounded during his post-match press conference. “The whole first half, it’s hard to pinpoint one thing, it was just not in sync, not aggressive enough, not a full understanding of exactly what this tournament and this game was going to require,” he said. “If we learned one thing, it’s that if you don’t show up and you’re not ready to play from the beginning, you cause yourself problems … [the players need] Better tactical understanding and savviness and awareness for exactly what matches require.” Explaining his approach to half-time, he said, “I tried to stay calm and say that we weren’t sticking to the things that we felt we needed to command the game the way we want, and I wanted to see if they could do that in the second half.” They couldn’t, so he needed the subs to sort it.

There was also this: “As a manager I’ve never lost to a lower division team in the cup. And part of it is because I demand that the players take it seriously, and that we play with intensity as if it’s a first division match.” The result of Marsch’s pre-game demand was: “We didn’t do that in the first half and we put ourselves at jeopardy, and so we have to learn now, with a young group, what cup matches are and how to handle it.”

I’m quoting long, because this has been a theme. He prepares the team for the match, demanding certain things and practising tactical plans, like here where he wanted first division intensity and Kristensen in attack. After all that work, it doesn’t work, and Marsch talks afterwards about how he can’t get the players to understand his plans and make them work. Second half changes are made on the hoof, and individual quality — Rodrigo here, but think back to Summerville and Gnonto’s late impacts before the break — is needed to save the day. We don’t even have to make our own assessments of what’s happening in games, because Marsch is very open about what he was trying to do after it hasn’t happened. But that doesn’t exactly inspire confidence.

Meanwhile, Leeds are somehow still in the FA Cup, so all’s well that ends well, I guess. Except this isn’t over, it’s a replay. Nobody wants to play Cardiff again, ever, and the fourth round draw is only offering a fraught reward. But remembering how I felt before this game, it is also still an opportunity. With Premier League status and quality, Leeds should have enough to deal with Cardiff in the replay, then whichever of Boreham Wood or Accrington Stanley they meet in the next round. That should be a path to the fifth round, a dreamland for Leeds. That prospect was not likely at half-time, but Leeds seem to be relying on second chances for everything right now, so let’s try not to fool ourselves again. ⬢