Work has just begun on building two new hospitals in Leeds, that together will cost around £500m. That’s £35m less than Chelsea spent buying the players in the squad that faced Leeds United in Saturday night’s football match.

And there you have it: The Game. I was temporarily lulled into pre-match optimism by betting odds putting Leeds a long way from victory, far enough for me and my five pound bet to get involved. But although I’d mistaken economics for sport again, at least I enjoyed my delusion for a short while.

Calm clearances by Liam Cooper and Jackie Harrison gave Kalvin Phillips time on the left to think, and his pass behind Chelsea’s defence exposed Kurt Zouma, who trundled after Pat Bamford like a defibrillator trolley being shoved up a hill. Edouard Mendy, the £22m goalie Chelsea bought to replace the £72m one that made too many mistakes, made a mistake, and Bamford took the ball around him and scored. 1-0 to Leeds United. 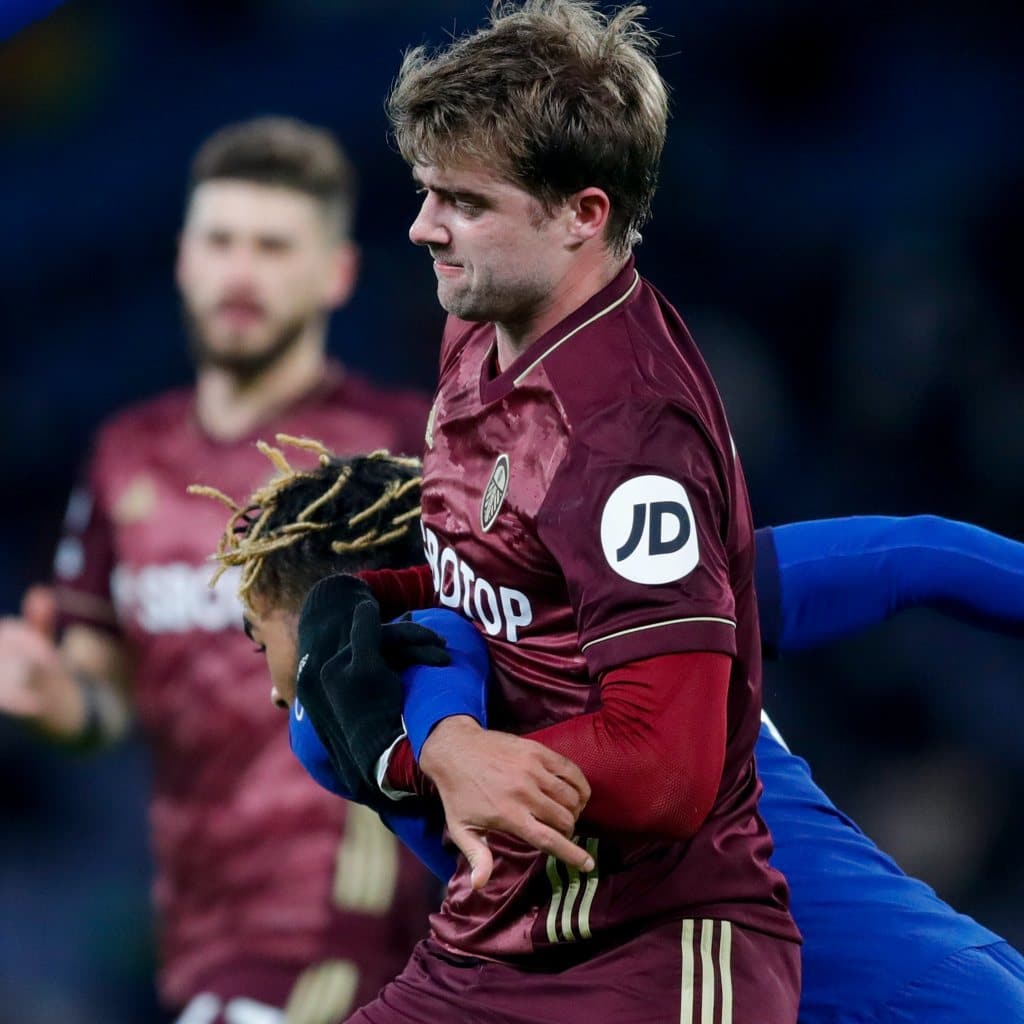 When £48m Timo Werner blocked a Chelsea effort on the line then whacked the ball off the crossbar I hoped that priceless miss would set the tone: Chelsea would keep attacking Leeds, as they had since kick-off, but Leeds would score the goals. It didn’t turn out that way. What are the odds?

When Diego Llorente replaced the injured Robin Koch, an £18m defender was replacing a £12m one, and partnering one who cost £700,000. When Chelsea brought on Christian Pulisic because Hakim Ziyech was injured, £58m was taking over from £36m. The combined cost of Chelsea’s bench would have bought Leeds United’s squad twice, and it showed.

Not only in ability. Llorente took to the pitch as if he’d just stepped out of a campsite shower, no hint of product in his fluffy brown hair. He was going up against Olivier Giroud, a cartoon cavalier forcing his way back into Chelsea’s team with the weight of four midweek goals and, if that hadn’t worked, four pounds of pomade. When Ziyech fooled Alioski and Harrison, creating space for Reece James to cross, there was no doubt the pompadour would score. He does. He’s a very, very good striker, and when all this is over, he’ll have the World Cup winner’s medal that says so.

Giroud names David Beckham as an inspiration, not for his playing style, but his looks. Even Frank Lampard Junior looked expensive on Saturday, unshaven in his slouch sweats like a tech bro just flown in from giving a TED Talk about how the key to happiness is three hours’ sleep. He muttered some things after this game about analysis, but like most tech entrepreneurs, the unspoken truth behind this success story came down to one thing: the backing of an investor with very deep pockets.

There are a couple of reasons why this focus on expense is more than just sour grapes after a defeat for an impoverished northern team visiting London, where the streets are paved with Scotch eggs. First is that Chelsea’s players are expensive but also very, very good. A while ago Marcelo Bielsa suggested Leeds are conceding more goals in the Premier League because the division hosts “forty of the best forwards in the world,” and here were three. Giroud, Werner and Pulisic are exceptional and you could see it in every anxious blunder of United’s defence. Kalvin Phillips is worth more than £30m on the market because it’s hoped he’s the new N’Golo Kante, but the real one was here, all £32m of him, dominating midfield. Even the atrocious goalkeeper they paid £72m to hate would suit other more patient teams just fine, if they could afford him. Add the homegrown players — Mason Mount, Reece James, Tammy Abraham, all England internationals — and Chelsea’s squad is teetering with so much quality it should win most games automatically through momentum alone.

Lampard Junior will protest at that, so let’s reassure him with the advice Don Revie gave Jimmy Armfield about becoming Leeds United manager in 1974. “All you have to do with those players is send them out on the field,” he said. “They’ll do the rest. You’ll be able to sit in the stand and pick up your bonus. They’re the best players in the country.”

Secondly, there’s no point trying to take moral or ethical high ground about Chelsea’s expensive squad when our club are desperate to rush headlong down and join them in the foothills. Hospitals, schmospitals: nobody was thinking about the sick or needy when Leeds were spending £27m to announce Rodrigo. Partnerships with Roc Nation and an esports franchise, stadium expansion plans and sponsorship deals, they’re all being done so one day we can do what Chelsea do, hopefully better. Yes, it’s cute how Ian Poveda looks and plays as if we found him in a basket by a river. But it was obvious that our two best players — Kalvin Phillips, brilliant in the first half, and Rodrigo, who came on and took us into Chelsea’s half after a long absence — were our two most valuable. The best way to even up those pre-match odds is obvious.

In the meantime we have Bielsa, and if Lampard Junior standing on the touchline being ordered about by Giroud is The Game, finding his infamous ‘nobility in the resources used’ is Bielsa’s. He has forced Premier League ability into Championship bodies at Leeds, and that’s the reason we can go to Stamford Bridge now, looking so cheap: because Bielsa can give them everything for the top level except a way of defending corners (Zouma headed Chelsea’s second goal straight in like that).

We owe our upward trajectory to Bielsa, but where its future path leaves him is a question games like this bring nearer. It’s not a moral question: if there’s a line to be drawn across exorbitant spending in football, Bielsa’s career says he’ll side with The Game. As a youngster he had paths to politics or even hospital architecture, but when he has cash to spare now, he doesn’t build orphanages in Rosario but new training facilities to help Newell’s beat Central. He believes in football’s power to bring people joy, but as much joy as when their ill child is made well again by skilled staff in a modern hospital? Well. I mean. Bamford’s goal was really great.

Would Bielsa sign Timo Werner to replace him? If Leeds had £50m to do it, and he thought it was right, undoubtedly. But is that thought process, that so entirely describes the Premier League, where he differs? While Bielsa’s belief in using what you have before wishing you have more suits Leeds now, we can’t ignore that he was so comfortable with our options at left-back he allowed Barry Douglas to leave with no hint of a replacement. There may be a limit to how long Leeds fans can tolerate games with players like Ben Chilwell (£45m) while we persist with Gjanni Alioski (forever willing to give more than he ever cost us, until one day when that won’t be enough).

What do we have in the meantime? Happiness, actually, which is good news for the cliches about what money can or can’t buy you. I’ve seen Leeds lose to Chelsea ten times before, but only this time can I shrug and think about how it’s nice just to be playing them again, and competing. And, for all the gulfs, determined effort and Illan Meslier’s fine keeping kept the score down to 2-1 until Chelsea’s breakaway third in stoppage time, and if the money spent on VAR had bought as good value as N’Golo Kante, Poveda would have been granted a penalty and Leeds given a good chance to take a point.

This satisfaction with losing ought to be a warning to the Premier League. This fixture’s history was hyped up before kick-off, but if at the end of games fans are going to compare balance sheets and care less, Most Exciting League in The World status might not last forever.

Which also takes us back to Bielsa. He believes that winning football games makes people who support the club happy. It does. So winning is everybody’s first duty. People sometimes mix this up with his belief in an attacking style, but Bielsa doesn’t believe in beautiful football for its own sake, he believes it’s the best way to win, and if it doesn’t work, it’s as pointless as any other style. This weekend Leeds United did not beat Chelsea, or play very beautifully, but Leeds fans are happy anyway. Why? The answer could be complex but simply it’s Bielsa. And to Bielsa, always resisting the cult of his personality, that was never the point. Is the system broken, then, and if so, where do Leeds go from here?

There are two convergent paths: more wins or the transfer market. And I suppose, when it comes down to it, that’s how football has been for a very long time. ◉