If the magic of the FA Cup third round depends on shocks, Leeds United’s brief annual involvement is better ignored. There’s nothing surprising about it anymore.

After so many embarrassing defeats, might we eventually become immune? Listing all the names blurs them into meaninglessness. Hereford, Histon, Rochdale, Sutton, Newport, Crawley. Colchester still nudge elbows remembering 1971. One day they won’t wear their wins like a badge of honour, when it’s harder to find a lower league club that hasn’t had their day of glory over the Peacocks. 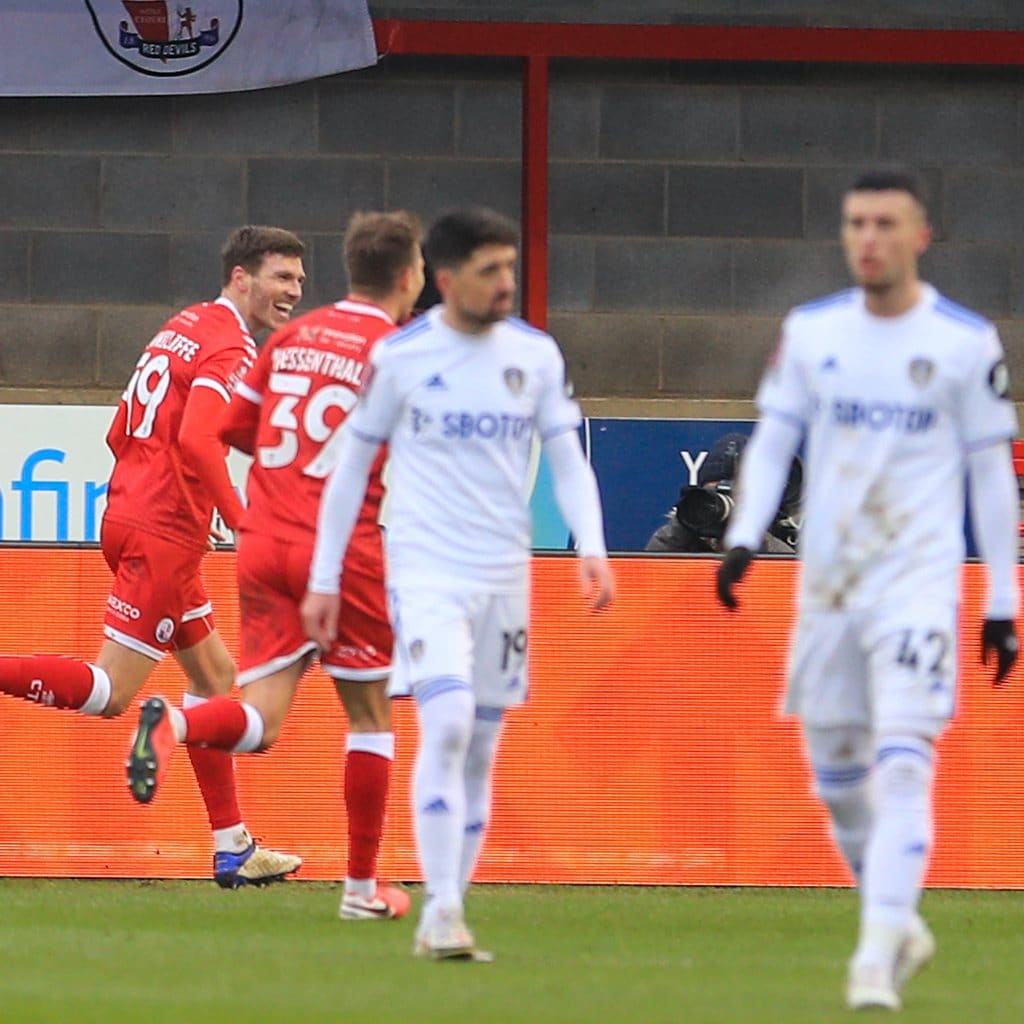 Amid the unreality of this year’s competition Leeds were the one thing to depend on. Covid-19 has led to the postponement of some fixtures, turned others into second-string mismatches, and destroyed the traditional atmosphere associated with big clubs visiting little grounds. New normal, meet the old normal, Leeds going out.

Crawley might be the least adorable of our conquerers. While the tears of Nick Tsaroulla, who recovered from a serious car accident to resume his career and score, were moving, they were balanced by manager John Yems’ week of pre-match pressure on Leeds, not over the match but a share of the match fees, and the cynical last minute introduction of a reality TV star making a documentary, for whom the money United were earning from the game would be loose change.

Stripped of the ingredients for cup magic — the crowds, the surprise, the romance — what were we left with? A miserable Leeds United performance and a deserved defeat, nothing more, nothing less.

If there is any more to it for Leeds, it’s to do with this game’s resemblance to the League Cup match with Hull in September, that Ezgjan Alioski saved from defeat in stoppage time before Hull won on penalties. For both fixtures Marcelo Bielsa mixed youth with enough experience to win; in both fixtures Leeds lacked every lustrous virtue of their usual standards. Against Hull at Elland Road, the excitement of promotion and fizz of the Premier League opener at Anfield was lost as dark terraces, not yet branded up for the locked down league, looked haunted by ghosts of JPT nights past. At Crawley, in crisp winter light, the game was indistinguishable from Sutton or Newport. It’s frightening how easily Leeds slip into the selves we thought had been left behind.

We can only ever speculate about the reasons, if there are any, for the team reverting so thoroughly away from everything that’s good about it when lower league opposition knocks in the cups. When it happens twice in a season our speculation can include the players excluded from both games while we wonder. Maybe it’s unfair to give credit simply for not being involved, but Stuart Dallas and Luke Ayling did as much as anyone and more than most to drag Leeds out of last winter’s dark plunge and back on course for promotion; Mateusz Klich’s ever presence has been significant. Without them, the players we would expect to use their experience to lead the younger players to victory at Crawley, basically, didn’t. Liam Cooper, Pablo Hernandez, Kalvin Phillips, Ezgjan Alioski, Rodrigo, Helder Costa; these players shouldn’t be passengers in any team. I wonder if swapping three for Ayling, Dallas and Klich might have improved them all. But then, the importance of those three to the club was precisely why they didn’t play.

It’s going back a long way, but it’s a strong example, how Billy Bremner never forgot the help from Don Revie during his first few games on United’s wing. Revie was the inside forward, telling the youngster that if he had any doubt or difficulty, not to worry, to look for him and give him the ball. Where was that help for Leif Davis, Jack Jenkins, Olly Casey or Sam Greenwood, or even Ian Poveda, Jamie Shackleton or Pascal Struijk, when those young players realised Crawley were more than the U23s had prepared them to chew?

Taking an inevitable paragraph of his own is Champions League medal-owner and one-off Spain international goalkeeper Kiko Casilla, who didn’t rescue the mistakes of Casey and others in front of him, but compounded them, ensuring goals instead of rescuing them. There’s little left to say about Casilla except that, even if he’s somehow still at Leeds for the next cup game, I hope Elia Caprile or another young keeper is given the chance while Illan Meslier rests. Leeds might as well let a young player have new experiences, rather than persist with someone who plays as if he’s forgotten everything he ever knew.

Casilla did make one excellent save, stopping a powerful header in the first half. But it only felt like a matter of time. Like Helder Costa, he only plays as well as his first mistake; once it’s made, there’s no recovering. Costa managed a couple of good moments but soon lost heart, and was as anonymous as Rodrigo in the second half, when Rodrigo at least had the excuse of being off the pitch.

Rodrigo left at half-time, with Cooper and Struijk, changes that felt pre-planned according to fitness programmes focusing on the Premier League. The substitutions were the harbingers of United’s second half misery. Leeds were not so bad in the first half that, with more application, winning was beyond them. The fifteen minutes after half-time were the time to assert Goliath status, snatching the slingshot from David. But playing Jackie Harrison as a striker and introducing Casey and Jenkins to the spine of the team gave the impetuous to Crawley. The next two changes, throwing Raphinha and Greenwood into a confused attack overloaded with wide players, came after Leeds conceded twice in five minutes within eight minutes of the restart. If Bielsa had delayed his first changes for fifteen minutes, Leeds might have taken the lead and won. Instead his second round of subs were in desperate pursuit of what would have been, if Leeds had pulled it off, a real FA Cup shock.

Within ten minutes Crawley scored a third, and their players were all smiles as they made changes ready for the last twenty minutes. Leeds never managed the pressure that might have had them frowning. Crawley’s compact 4-4-2 kept Phillips pressed anonymously as Bielsa’s regulation third centre-back against two forwards, often Leeds’ second best option, while squeezing the spaces that Hernandez didn’t look capable of finding anyway.

Bielsa is fallible. It’s not his fault he’s on a pedestal. A vivid memory of promotion night is the fan outside his house telling him, ‘You are God’, receiving a wagging finger of rebuke. Our God is an emotional mortal who understands the pain of defeat is a necessary reminder of how feeling alive is preferable to numbing godliness. But self-inflicted defeat hits different.

The sparse press facilities at Crawley meant he was only interviewed by the shocked BBC Sport broadcasters, who wanted to know how this could have happened, rather than the weary Leeds press, who might have asked how this could have happened again. If there is solace for Leeds fans it’s that our cup defeats only come round twice a year, and they’re now leavened by our place in the Premier League. So much about the club has changed for the better, but we’re not being greedy asking for one more small wish to be granted.

Football is a battle against the overwhelming likelihood of defeat; only one team can win the cup, and each round is about pushing fate a little further. But it’s not healthy for Leeds to feel that the early rounds are inevitable, that lower league clubs are unbeatable. Losing 3-0 to Spurs is a symptom of where Leeds are, and it’s forgivable. Losing 3-0 to Crawley is where Leeds were, before Bielsa, and it’s hard to understand why we can’t move on. ◉