As I was saying after the defeat to Leicester City, football never ends. In that game, Pat Bamford missed an early chance not only to score but to ruin Leicester’s plans before they got started, and the praise after his hat-trick at Aston Villa was forgotten. But within five days football was carrying on, and Bamford’s finishing was impeccable, his timing exemplary. And football still wouldn’t let him win.

In the directors’ seats Victor Orta was screaming that he hates modern football, but modern football will shrug at that. It’s what we always wanted, isn’t it? If only we could have stopped time and let it be July forever, but sixteen years out of the top flight wasn’t the end. Selhurst Park is what we dreamed of and what we now have. Denuded of fans, the ground is draped in bold graphics that could be advertising a hipster sausage brand established by tech executives having a mid-life crisis, and the Dave Clark Five’s Tottenham Sound is booming across the empty terraces because nobody has come up with an idea adequate to replace what was modern in 1963.

It could be worse. Fulham and West Bromwich Albion both look not just ready but willing to be relegated, Slaven Bilic’s freedom of the Hawthorns becoming the freedom to leave. Nothing so extreme looks like happening to Leeds United, but maybe those clubs have the right idea by winding their clocks back to start another exciting promotion season next year.

In the two seasons we spent coming up we never thought of losing 4-1 — twice — in one week. If Leeds are not going back to putting F-for-Fun in the EFL, they’ll need to learn from this week. The Peacocks were undone in both games the same way, by giving an early advantage to teams who needed just that to excuse their defending. Neither Leicester or Crystal Palace are Liverpool, who took an early lead over Leeds but kept attacking, meaning they could be attacked. Ah, for those heady days when if Leeds conceded four they at least scored three. 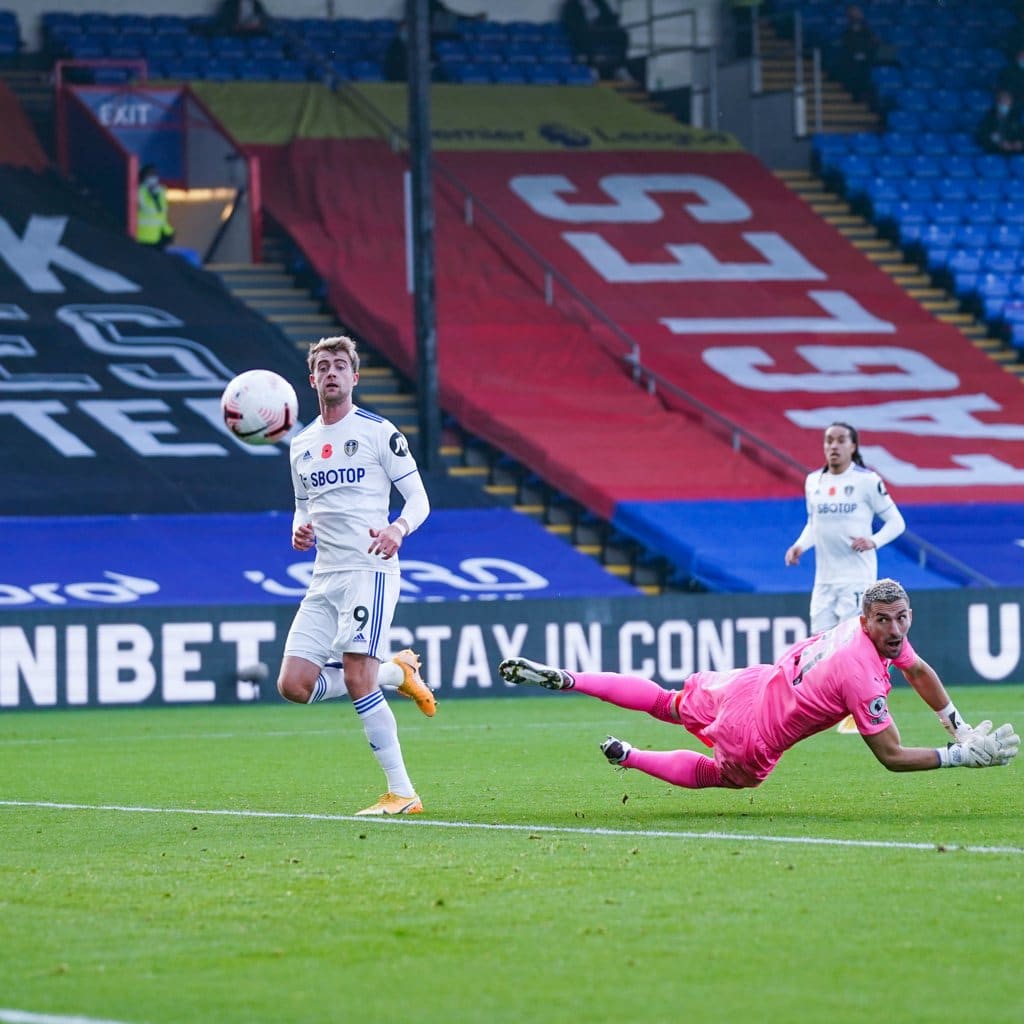 There were some signs of education between Monday and Saturday, but when it comes to defending corners, Leeds haven’t even gone to class. Scott Dann’s eleventh minute header was precisely cruel, but among the various design options for statues of Marcelo Bielsa we should consider one of him shrugging when he’s asked about set-pieces. British football, he says, is culturally unusual for finding corner kicks so fascinating that fans cheer when they’re awarded. He won’t let himself be drawn into debates about rule changes, but someone might gain his enthusiasm by asking about abolishing corners. Until then, Leeds will just keep defending them as if they’re not happening.

It was the rapid rush to equalise that indicated Leeds were not willing to give Palace all the gifts given to Leicester: these players would not let Monday happen on Saturday. But you know what happened by now. Bamford scored, it was disallowed. Eberechi Eze made it 2-0 with an unstoppable free-kick. Bamford scored again and it counted. Leeds did their job well in adversity, coming back twice against a team that loves to defend leads. It wasn’t their fault they were still behind, and there are only so many times you can equalise without getting level. Helder Costa’s own goal just before half-time effectively knocked Leeds out of the game, and who wouldn’t be deflated by a goal like that? The deflection turned Patrick van Aanholt’s cross into an optical illusion, sending the ball into Illan Meslier’s waiting arms until disguised spin sent it into the net. Like Leicester’s fourth, the VAR penalty on Monday night, it felt very unnecessary.

You can picture the scene on the way home. Victor Orta waving his mobile phone at the coach driver, showing a route to Stockley Park or straight to the home of the day’s video assistant Mike Dean, yelling about taking the next turning and sorting a few people out. Pinning Dean down and tickling his feet until he cried might have overstepped the mark, but Dean’s decision against Bamford’s equaliser, made by drawing pixel lines through armpits, across toes and around buttocks until the striker could be called atomically offside, was as offensive an example of ‘can’ overruling ‘should’ as football has known. Mike Dean has the technology to rule a pimple offside if he so wishes. That doesn’t mean he has to, or that it’s a good thing when he does.

The whole game fell victim to Dean’s tech-backed pedantry, because if Leeds couldn’t get ahead, it was crucial to keep the score level so Palace couldn’t crowd around their own goal and defend a lead. But that’s exactly what Dean allowed them to do, and we’ll never know how different the game might have become at 1-1.

But there were other repercussions. Bielsa says he chose the players “most apt for the game” and that’s why Pablo Hernandez wasn’t among them. Deep down in my dictionary’s definition of ‘apt’ — it’s Webster’s Collegiate from 1927 — explanatory examples include references to the ‘display of habitual tendencies’, as in, ‘he is subject to fits of passion’. Enough there for a thousand clickbait articles lining up El Loco versus Pablo as the story to occupy the international break, even after Hernandez posted an apology on Instagram for the way he reacted to being subbed against Leicester, throwing aside a black armband he was wearing as a remembrance tribute and kicking over water bottles.

It might not have mattered so much had both Bamford’s goals been allowed to stand, and both Mateusz Klich’s assists. Pushed forward into the position he played when we found him at FC Twente, Klich’s two creations came about in similar ways. For the first, he had found so much space on the edge of the penalty area that Luke Ayling didn’t seem to believe it, delaying a pass to his pleading mate; on the ball, Klich span, and his pass to Bamford was just heavy enough for the finish to be light. The second was the same but in the air; Bamford ran across Klich as he headed down Ayling’s chipped pass, a set-up with a sort of scruffiness Hernandez would never go near. All was calm from there, the ball obedient on Bamford’s chest and hit before a bounce into the bottom corner. Two goals for Pat, two assists for Mateusz, two high-fives for Bill slash Luke, all cut in half to make it look like Leeds didn’t know how to attack Palace. 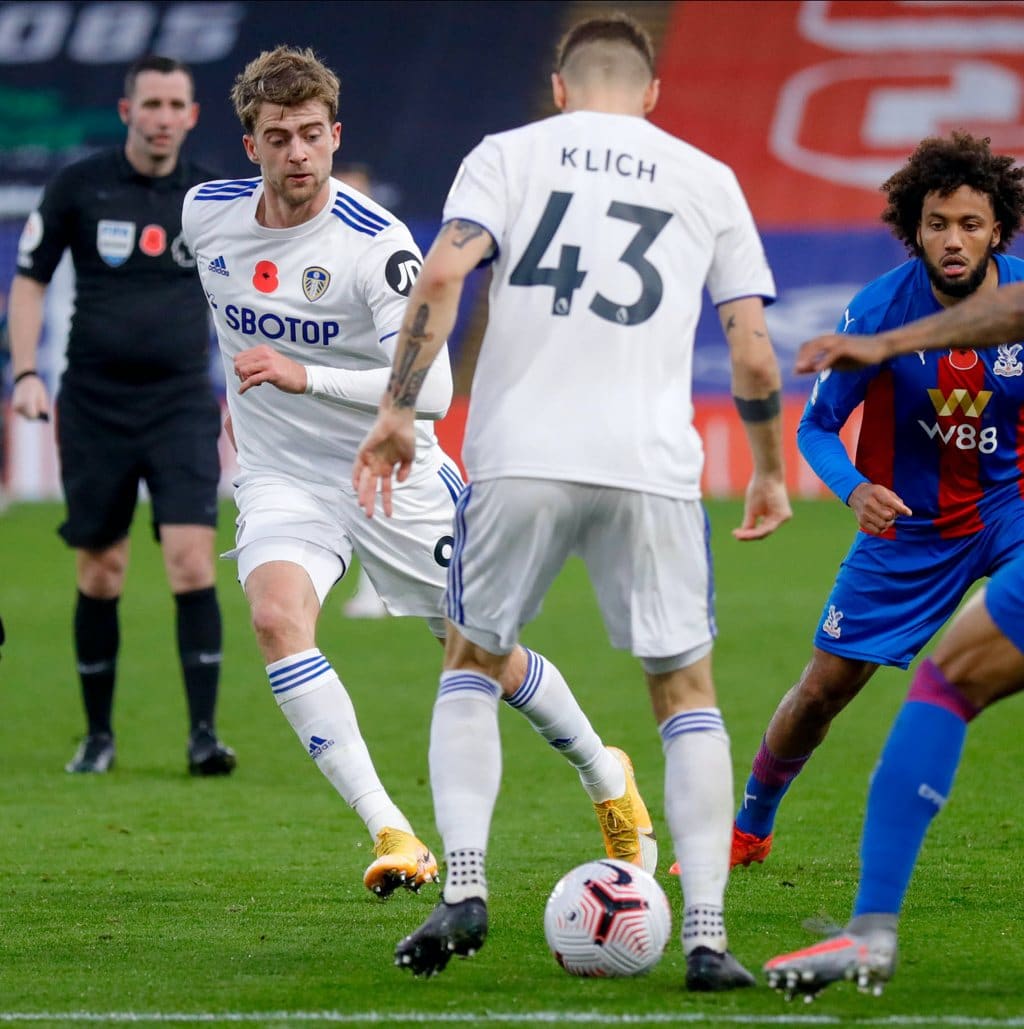 They found that knowledge harder to use in the second half but the problems went deeper than the lands Hernandez likes to roam. Raphinha was on the pitch for the second half and Jackie Harrison was on for having the ball, but Palace made it difficult to switch passes to either of them. Numbers in midfield were being made up by Stuart Dallas and Pascal Struijk, and when they did get the ball to the wingers, Raphinha was exciting and Harrison was frustrating, and hardly a chance got made.

This was all part of the peril of playing three at the back against Palace’s two strikers. It’s always awkward because it doesn’t feel like United’s decision; the defence is decreed by the opponent’s formation, and at its most ludicrous that can end up like the crucial match against Barnsley last season, a formation switching game of cat and mouse. An extra discomfort here was Kalvin Phillips’ absence, as the change pushed Struijk all the way out of his defensive harbour and thoroughly into midfield. Bielsa insists on uncoupling action from position: his football is about what you do, not where you do it. But Struijk, trying to dictate with the ball at his feet in Palace’s half, looked like he was longing for the good old days at the Ajax Academy when he could stand in front of a goalkeeper and defend. Palace’s fourth goal wasn’t down to any individual, but when Wilfried Zaha counter attacked and found Jordan Ayew unmarked to score, it was because everything at the back had been broken by the twin needs of chasing a two goal deficit while defending against two strikers.

The good news is that none of that is news, and unlike the corners thing, which also isn’t news, there are answers. In summer Leeds stopped ignoring the way they’d ridden their luck through Adam Forshaw’s year without any, and if Michael Cuisance had better legs there would have an £18m stand-in on the pitch in Croydon. In attack, we only missed Hernandez because he was the one available: so far this season it’s Rodrigo showing the quality and imagination needed when an opposing team goes full Hodgson. A Phillips – Cuisance – Rodrigo midfield is a fantasy because one of them plays for Marseille, but it would need a very good player to do better than Klich, and the only problem with any of those three is their understudy.

Like many teams find when coming up from the Championship, squad depth can be the hardest thing to change. Leeds have a midfield of excellent international players, but their back-ups are either too young, too old, or too far out of position for the gap not to be tangible. The uplift doesn’t help them: Tyler Roberts came on at Selhurst Park, who looked an able deputy for Hernandez in the Championship, but when compared to prime Rodrigo, is unlikely to have Luis Enrique asking if it’s too late to locate a Spanish grandparent. He might get to that level, and Struijk might too, through experience. But how do they get that experience without Leeds losing 4-1 all the time while they do?

Well, if we can wait 53 years for a better song than (boom boom) Glad All Over to come along, and sixteen years to get into this (boom boom) poxy, hateful, video-obsessed Premier League, we can wait a little longer before writing this season off one way or another. I’ve skirted around the exact phrase so far but I might as well face up to it now: this season is going to be a learning process. There, I’ve said it. “If in all games we concede four goals and only score one, it’s going to be a hard reality,” Bielsa said after the game. I don’t think he really expects that to happen. Even after this week, neither do I. ◉ 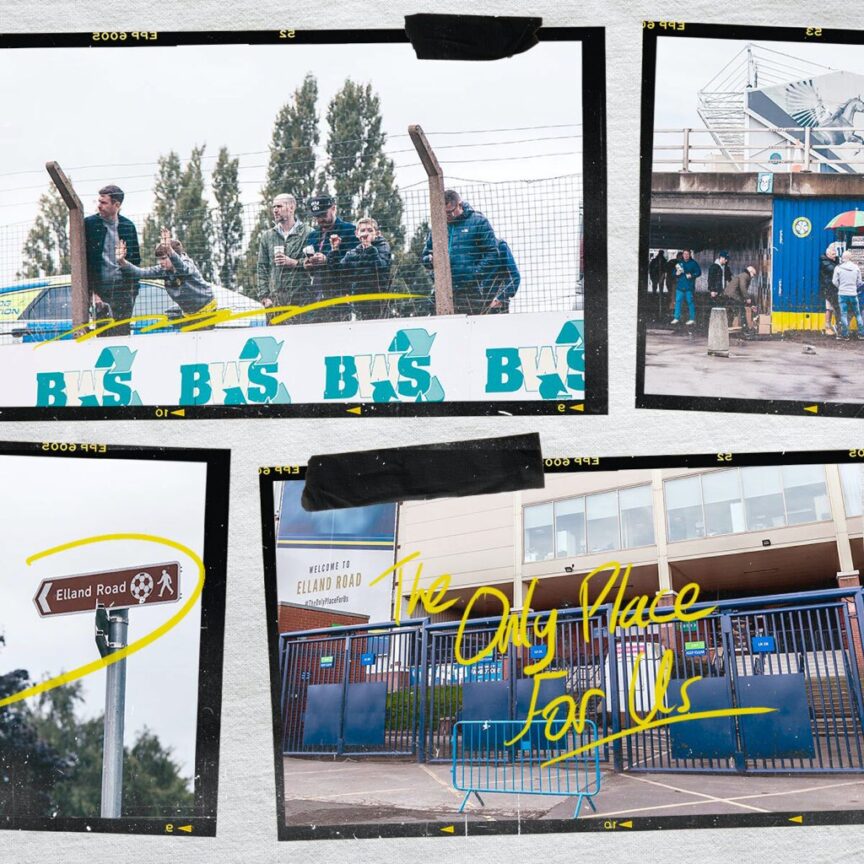