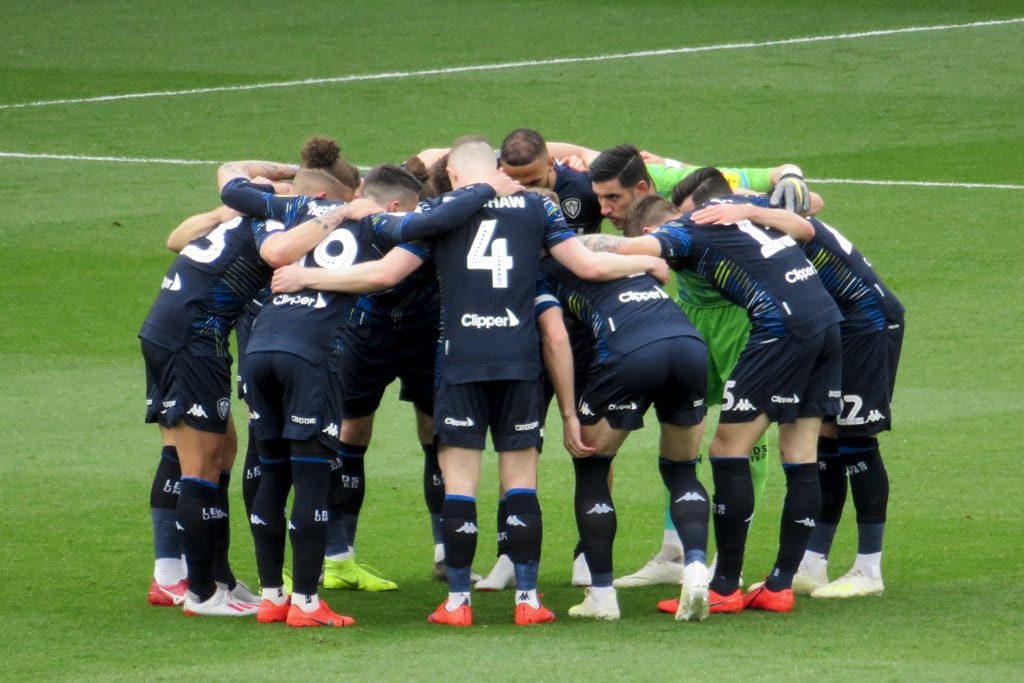 Watching Leeds United play football shouldn’t need the stiffened resolve against nerves that the play-off semi-final first leg at Derby County demanded before kick-off, when it took several large bolts of gin just to look at what kit the team would be wearing. The blue one, like a sci-fi obsessed teenager’s duvet from the 1980s. Okay. That was a start.

Nerves were the one thing the fans could share with the players, though. We might not be able to caress a football like Pablo Hernandez, but we can wilt under pressure as well as Kiko Casilla shrivelled beneath a high Ipswich cross in his last significant act in a football game. We’re nervous, they’re nervous, he is nervous, she is nervous, tout le monde is fucking feeling fucking sick.

It was the mission of the first half, or the first quarter of the two legs, to overcome the tension and reestablish that Leeds United Football Club has a team that is willing and able to get promoted to the Premier League. They’d gone so far in the other direction since January that they played against Wigan Athletic and Brentford as if all they wanted was the safety and security of playing them again next season, rather than facing the unknown and playing Manchester City and Liverpool. Promotion isn’t easy, and the play-offs are a test of how hard Leeds United can be.

The answer is that they’re harder, better, stronger and tougher than they’ve been showing in recent weeks. And than Derby County. And after making that clear in the first half, they capitalised on it in the second; ten minutes after half-time Kemar Roofe moved and finished like Pat Bamford doesn’t, getting onto a curving cross-field pass that Jack Harrison sent swooping from the left the way Jack Harrison doesn’t. The Leeds players celebrated the way Leeds players do, Roofe looking for cameras to receive his hand signals, Gaetano Berardi looking for Roofe’s throat to receive his grip.

Leeds had been flirting with becoming their recent selves before that goal, getting through the first half with lots of possession but without scoring, and for once without many chances. The story had been at the back, where Berardi replaced Pontus Jansson and combined with Liam Cooper to make David Nugent look naive; and in midfield, where Jamie Shackleton took over when Adam Forshaw was injured, and added forward-thinking energy in place of Forshaw’s pragmatic conservatism. That brought risks, as Derby had Duane Holmes, a bottle rocket of their own, playing the way Leeds don’t like by running at the centre-backs and forcing them to backpeddle. But Kalvin Phillips, whether on the bench, in defence, being substituted after half-an-hour or bearing down on some kid with the ball, hasn’t shown a flicker of nerves all season, and proved again that he can provide all the defensive cover Leeds need.

That concentration on running through the middle must have been Frank Lampard Junior’s one bright idea for his third attempt at Marcelo Bielsa’s Leeds, because on the wings the game was all about how far Luke Ayling and Stuart Dallas could get forward. Derby had a bright first fifteen minutes, and when that petered out, Leeds shrugged, saying, well, that was kind of cute, but we’ll just carry on as we intended now. Leeds under Bielsa are, in one sense, very predictable, and most of their attacking constructions in the next hour were built from blueprints we’ve seen over and over again this season. But that’s how you know things are going to plan; when the ball is dropping over the full-backs to Roofe, when Pablo Hernandez is chipping over the centre-backs to Ayling, when Dallas is trying to finish crosses at the back post. The pass from Harrison to Roofe this week was a pass from Ayling to Jack Clarke last week; this week it worked.

Lampard’s other hope for this game was to get physical and play the occasion. When Duane Holmes thundered into two strong challenges early in the second half, the crowd roared inside Pride Park, and Lampard turned to the fans behind his bench, punching the air and urging them to create a hostile atmosphere. A minute later they were off their seats and cheering when, as Leeds tried some fancy stuff, Harrison backheeling a pass from Shackleton in front of the dugouts, Tom Lawrence clattered through Stuart Dallas, the third big tackle in a matter of minutes, and for a moment Lampard might have felt that with the ferocious backing of a colosseum his warriors were about to slay Leeds. But the referee played advantage, Harrison took a touch and crossed to Roofe, and Leeds were 1-0 up. So much for that idea.

Fikayo Tomori had already flown two-footed past Shackleton’s knees, substitute Tom Huddlestone had another go at Stuart Dallas by lining up a forearm to his face after the ball had gone, and Richard Keogh was closer to the referee than he ever was to Roofe, his eyes wide with injustice as if his teammates were being jailed around him. Unwisely, Mateusz Klich got involved, sticking his head into Tomori’s stomach about as hard as Ezgjan Alioski goes for a bite of Hernandez’s, and was booked amid Keogh and co’s claims of brutality. If only Klich had reacted that far over the top when Conor Hourihane punched him in the stomach the other week, Aston Villa’s midfielder might not have been scoring in the play-offs this weekend.

The referee, Craig Pawson, dealt with that situation calmly, indicating with a touch to his earpiece that he was getting information from his assistant, and giving Klich a yellow card; Pawson had been looking elsewhere, so if he hadn’t had help, he wouldn’t have been able to make any decision at all. The officials’ teamwork was the source of Lampard’s anger after the game, about the way Pawson whistled to give Derby a penalty after Harrison collided with Jayden Bogle, then turned it into a free-kick to Leeds after talking to his assistant, who was positioned right next to the two players.

Lampard described himself as “astounded” by this instance of “VAR without the computer system — human VAR”, apparently unaware that bluetooth headsets mean match officials are constantly communicating with each other anyway to triangulate the most accurate version of events from which they can make decisions. “Once the referee has given it, I haven’t seen them give a penalty and then go and consult [the assistant] and then decide not to,” said Lampard, who might benefit from information from his own chosen assistant, Jody Morris, if he didn’t see a referee do exactly that at Elland Road in January, when Leeds were given a penalty against Derby that was reversed due to an offside given by the linesman.

The penalty claim came amid Derby’s resurgence after United’s goal; Jack Marriott and Mason Bennett replaced Nugent and Holmes, and Derby’s attacking improved for a time. But it didn’t translate into shots at Casilla, and as Leeds nursed the game towards victory, United’s fans had all the reassurance they needed before the second leg; that Leeds United’s best is still better than Derby County’s best, and the players aren’t about to fall below the level required the way they’ve fallen against Wigan, Brentford and Ipswich lately.

That’s not to say Leeds will definitely get through Wednesday’s second leg and onto Wembley; as Bielsa has said many times this season, making a prediction in football only makes you look daft. But it is to say that Leeds United’s players are here now, they’re up for it, they’re not nervous, and the fans don’t need to be nervous anymore. ◉

(If you enjoy these reports, are you reading the BUFF? A daily email newsletter by Moscowhite for twenty pence a week. Help support independent writing: Click here to get your daily BUFF.)