Terry Venables always had friends. But they weren’t always useful, or easy to find in Yorkshire.

George Graham had thought he was doing Venables a favour when he told him to take the job he’d previously held and become manager of Leeds United. From outside Elland Road, it looked like the years since Graham left his former assistant David O’Leary in charge had made a big club better, but within six months, Graham was calling Venables to apologise for leading him into trouble. “I had no idea how bad things had become,” he said. 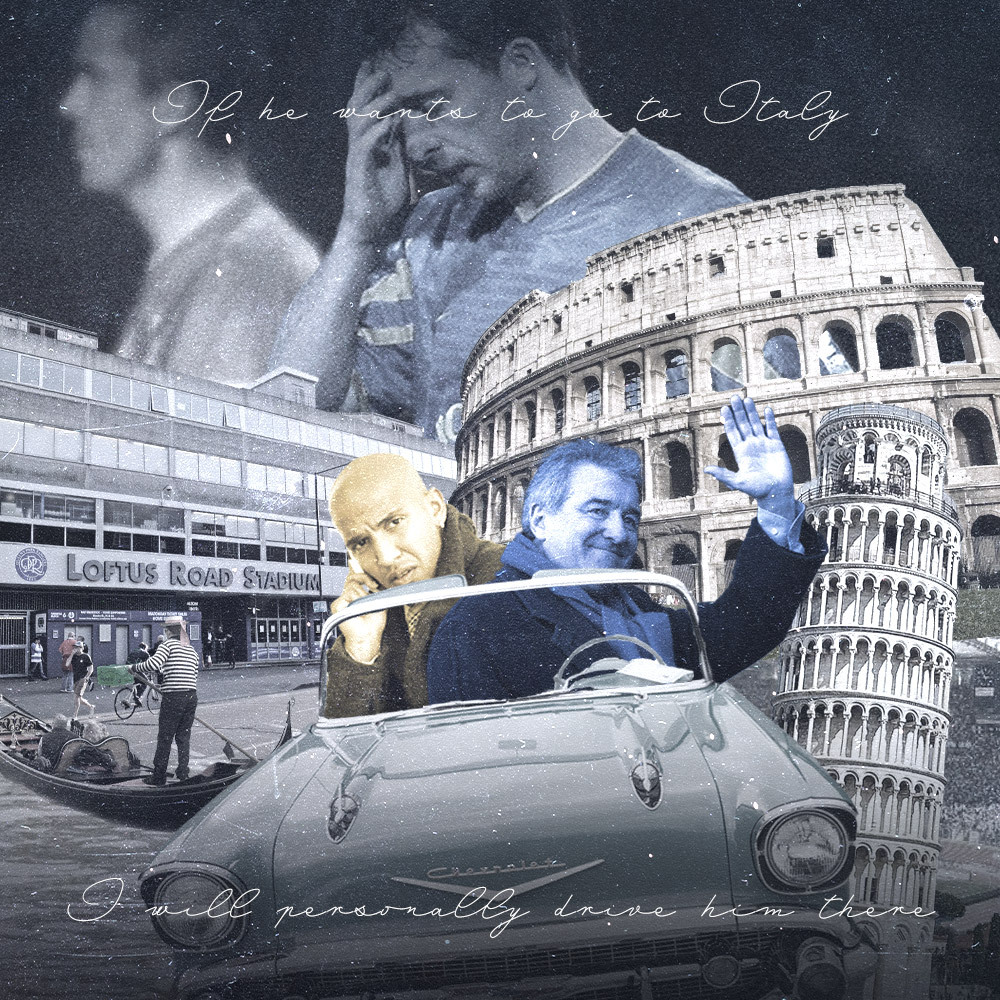 After the collapse of the ITV Digital television contract, Leeds weren’t the only club in trouble. Their neighbours Bradford City had just convinced their players to defer their wages until the end of the season, and were struggling with the aftermath of a mad summer when chairman Geoffrey Richmond and managing director Shaun Harvey spent millions on transfers using the same company, Registered European Football Finance, that was causing cashflow problems behind the scenes at Leeds.

The scene out front at Leeds wasn’t yet reflecting that turmoil. Selling Rio Ferdinand and Robbie Keane had brought in around £40m to offset failure to qualify for the Champions League, and deputy chairman Alan Leighton could still present a plausible voice of reason when discussing the future financial health of the game. He felt that replacing enormous basic wages with performance related contracts and big cuts in case of relegation would help clubs in the future. Clubs like Bradford, that is.

As for Leeds, the PLC could see no reason why Terry Venables shouldn’t have them higher up the Premier League table than 16th. Opening a new £5m building at the club’s state of the art Thorp Arch Academy, chairman Peter Ridsdale said it was an example of the advantages the club was giving its playing staff.

“This is now no-excuse time because when you see the facilities the players have, there aren’t any excuses,” he said. “Apart from the fact they are all very well-paid individuals, they are all now very well looked after, too. If any of them is listening, on Saturday I would like three points, please. Let’s get back to putting our season together.”

Were any of them listening? Olivier Dacourt was talking, to France Football magazine, saying the team’s slump was a “disgrace,” that the squad “ought to be in the top four,” that he only had a distant relationship with Venables. “I do my work conscientiously, hoping it will pay off, but it’s fair to say that I’m starting to wonder,” he said.

Dacourt, though, had been injured for several weeks, and Venables said injuries were the cause of most of his immediate problems. Mark Viduka, Harry Kewell and Lee Bowyer were all out for the weekend’s trip to Fulham, while Danny Mills, Lucas Radebe and Michael Bridges were only just coming back to fitness, plus Robbie Fowler, after surgery on a career threatening hip injury. Venables said he’d never known a situation like it, and blamed the UEFA Cup for overstraining the players and taking away time to work on tactics.

“We have had three games in eight days nearly all the time, which doesn’t give you much chance to do anything apart from say who’s fit and let’s go again,” he said.

Fulham’s toothpick chewing manager Jean Tigana was under pressure too: he had fallen out with chairman Mohamed Al Fayed, who had brought in then swiftly taken away Franco Baresi as director of football, without consulting his manager. Tigana was now hesitating over signing a new contract and Al Fayed, unhappy in 14th place, was withdrawing the offer. “It is not up to him any more, it is up to me,” he said. “It is whether I still want him or not.” Tigana just wanted a fit striker to face Leeds; Louis Saha, Facundo Sava and Barry Hayles were injured, Steve Marlet suspended.

Leeds had only won one of ten Premier League games since a 1-0 victory over Manchester United in September, and this felt like a chance. Loftus Road, where Fulham were playing now Craven Cottage fell short of Premier League requirements, might have been more homely surroundings for a former QPR player and manager, but Venables’ problem was that a lot of people from Leeds were there too, and United were failing to perform.

Fulham had several chances to score before defender Martin Djetou rose above a static Jonathan Woodgate to head in from a corner, and that was only the tenth minute. Woodgate was believed not to be speaking to his centre-back partner Michael Duberry, after events during Woodgate and Bowyer’s infamous trial, and their method for dealing with Steed Malbranque and Luis Boa Morte was to stand aside, leaving the woodwork and goalkeeper Paul Robinson to do all the work. England manager Sven Goran Eriksson was watching him, and saw plenty.

United’s midfield of Eirik Bakke, Stephen McPhail, Jason Wilcox and Paul Okon — injured since signing in the summer, this was his first start — could hardly put two passes together during a first half of constant pressure from Fulham, but it was striker Alan Smith making way at half-time, for Robbie Fowler. Smith was said to be ‘unwell’, while Fowler was playing his second game since injury, and with him up front was Michael Bridges, starting his first game since October 2000. Leeds did cross halfway in the second half, but only the introduction on the hour of sixteen-year-old James Milner sparked them into anything like life. The net result of Leeds looking livelier going forward, though, was greater exposure at the back, and had Saha been fit for Fulham, there was no saying how many of their twenty shots might have found the net.

With Venables next to him in the directors’ seats for the first fifteen minutes, Ridsdale watched in silence. After his worried manager went to the dugout, he watched with his head in his hands. Before the game, Venables had been talking about the transfer window opening in January. “I have asked about what freedom I will have to bring in new players,” he said, “but I don’t know what the answer is yet.” Perhaps Ridsdale was trying to think of a way to tell him.

The lack of answers continued after the game. The fans had sounded certain: ‘Terry, time to go’ and ‘Bye bye Terry’ were sung from the away end in the second half. “I’ve no idea how long I have to put things right,” Venables said, “but I’m going to keep working hard.”

He sounded realistic about the chants, and the risk to his job. “I haven’t seen the chairman, so I don’t know what he’s saying,” he said. “It’s not going on in someone’s house. It’s there for everyone to see.” Someone asked, where do Leeds go from here? “To Elland Road to play Malaga on Thursday,” quipped Venables.

There was more the next day, when Venables answered Olivier Dacourt, in a column in the News of The World. He accused Dacourt of using his injury as an excuse, that he’d been allowed to visit France for personal reasons but was more interested in lining up a transfer. If Dacourt wanted to know what Venables thought of him, he could knock on his door and ask him, rather than talking through the French press.

But if the conversation was to take place in the media, said Venables, “Well, I’d like to say here and now that he knows exactly what I think of him. I can’t believe he has the nerve to say those things and I think he should take a long hard look at himself. If he wants to go to Italy — and if someone is interested — I will personally drive him there.”

Until Dacourt took up that offer, and until Ridsdale advised otherwise, Venables had only one route ahead: back to work on Monday morning in the friendless north. Boxing promoter Frank Warren offered words of support elsewhere in the News of the World — “He took the Leeds job just three weeks before the start of the season and has been dogged by injuries and debts” — while Jeff Powell was more fulsome in the Daily Mail.

When did it become, “a crime to be witty, charming, amusing and an intelligent advocate”? asked Powell. “If friends, like myself, choose to speak up in his defence, then so be it.” He reckoned Venables’ experience of the dark side of the football business at Spurs in the 1990s gave him a resume fit for the task now facing him at Leeds, and there was some credence to the idea that he would have better ideas about what to do next than Ridsdale. But the north was a bitter place, and while Powell knew Venables wouldn’t quit, Yorkshire was working against him. It was only a matter of time until, “the modern-day equivalents of the local mill-owners banish him from the doorstep of Leeds United one of these cold winter nights.” ◉