It’s amazing how much fuss Leeds United can cause by playing football Marcelo Bielsa’s way.

World’s best coaching nominations. International fair play awards. Furious accusations. Dismissals out of hand. It’s either a myth or it’s wrong but it got Leeds promoted in July. It was winter at Goodison Park on Saturday, though, rain persisting down the dark red brick walls of St Luke’s Church, and Leeds, in their dark not-red shirts, had to prove themselves again. They won, but when was that ever enough?

But Leeds play football in such a simple way, how could anyone be angry? The players all attack trying to score. If they don’t score, they get the ball back and keep trying. If the other team attacks, the Peacocks quickly mark all their players so the attack can’t work. Then they attack again.

The Premier League is beamed by orbiting satellites to nations all around the world, it has video assistant referees measuring what happens to millimetres, it has computational data analysis, billion pound stadiums, multi-million pound players. It has pundits paid fortunes to talk and expensive hours of airtime to fill. In the pandemic, the Premier League is supposed to be lifting the morale of a nation with its dazzling high-tech brilliance, as if the chemists designing Covid-19 vaccines were pulling on shorts and shinpads.

With all that at their fingertips Leeds United play the game like kids in any park, kids who would never be allowed on the grass at Goodison, attacking and defending at top speed as if, when the floodlights are finally switched off, they’ll plead with their parents to keep the game going in the rain and dark by streetlight.

Maybe their simplicity is the crime. What did critics say about Jackson Pollock’s paintings in the 1940s? He’s just throwing paint at the canvas. A child could do it. Frank Lampard Senior’s child could do it. But Frank Junior, born to be a grown up, is far too mature for that. How can you be proud of doing something anybody could do? 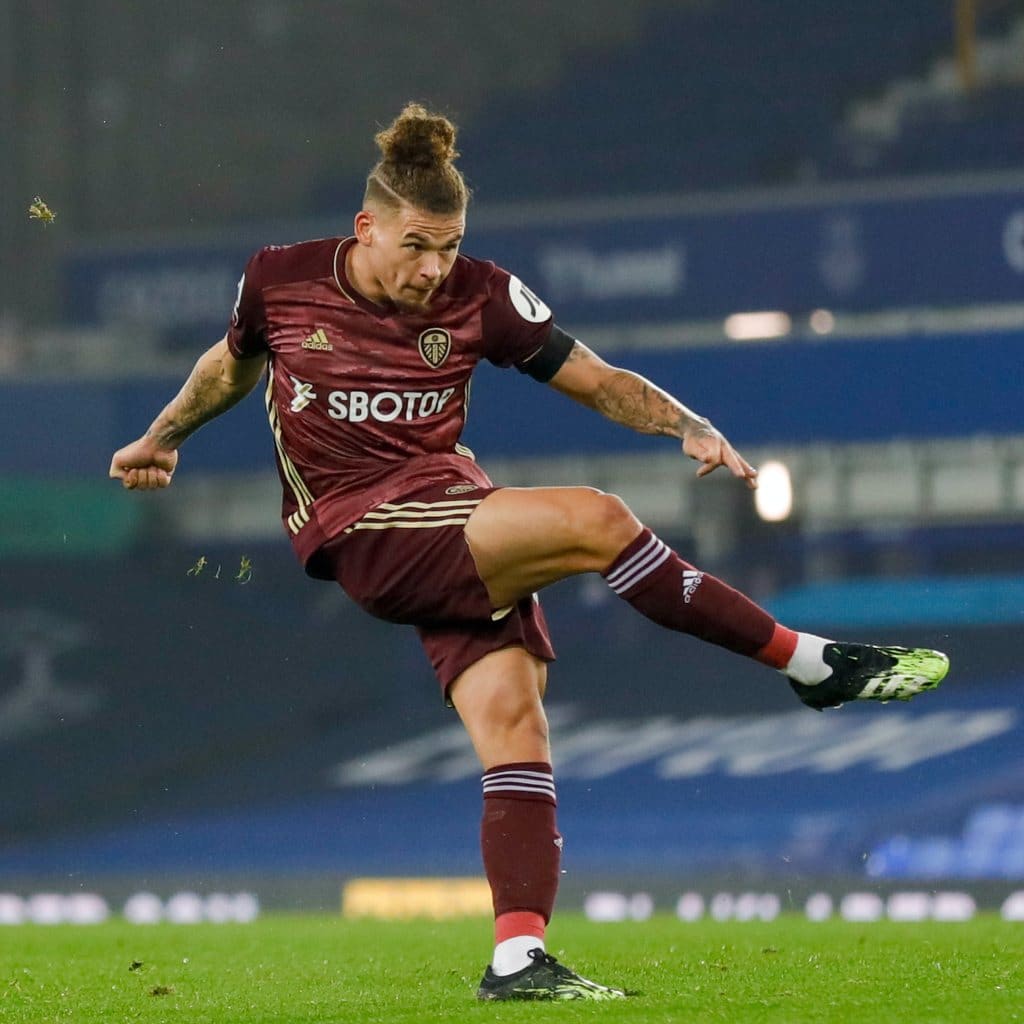 Football looks different from without and within. Last week Bielsa spoke about Diego Maradona, and “…what he gave to the spectators in beauty.” In Argentina, he said, Maradona had the status of a legend, a tale from folklore about a person, “who makes us believe that we are all capable of doing what he does. That’s why the loss of an idol always hurts the people who are excluded the most.”

In England Peter Shilton talked not about beauty or society’s excluded people, but about the handball goal scored against him, and to a lesser extent the England national team, in 1986. We heard the insider’s view of ‘the cheat’, and that’s the difference, between Bielsa trying to bring joy to people on the outside who can only find it through football, and Shilton, comfortable and rich on the inside with his OBE on the mantelpiece, but unable to see past the end of his too-short arms for the bigger picture beyond his memory of Maradona punching the ball past him.

What did Maradona do with his life? He brought excitement and pleasure to millions wherever he played football, by the way he played it. What did Peter Shilton do? He put his name to a video game called Handball Maradona, creaked through a penalty shoot-out that could have put England in a World Cup final, and left Chris Waddle — another player defined by exuberance — taking the blame.

Bielsa was asked about ‘the goal of the dribble’ that Maradona also scored in that 1986 game and answered simply: “It’s a work of art.” Pressed for more, he compared the sensation of watching the goal to being taken aback by the sight of a beautiful church. At present, Leeds United’s art is more like Luke Ayling’s unmade bed being dragged into the white-walled galleries of the Premier League, but the impact on pundits here is the same: they’re being asked to analyse something too simple for them to understand and refusing to choose silence for their answer. How can an old church or an unmade bed or a full-back in a six-yard box be art? Well, what can you criticise to prove it isn’t? Maybe you don’t like that full-back’s positioning. But first, at Goodison Park, can you tell us who were the full-backs for Leeds United, at kick-off, on ten minutes, twenty, in the second half, when Leeds attacked, when Leeds defended? If you have the same answer every time, you didn’t understand, and you’d be better appreciating, not analysing. You don’t have to pretend to know how the church was built before you get down on your knees and worship.

That’s what brings us to Graeme Souness’s absurd claim that Kalvin Phillips needs to score more goals. He doesn’t, but Phillips was the best player on Goodison Park, the leader in every significant statistic, and Souness had to think of something to say. It was either scoring goals or taking throw-ins. Maybe he’s not a good goalkeeper. There had to be a fault somewhere.

Phillips’ game was simple but fruitful. You might say he had it easy. Protect the defence by taking the ball off Everton, start attacks by playing good passes to the forwards. That’s all there is to it, so then you can add the panache with which it was done. Phillips was as suave on the pitch as he was perched on a sofa in Dua Lipa’s livestream show, PlayStation controller in hand, miming playing a game. I’ll bet it wasn’t Peter Shilton’s Handball Maradona. These days Phillips represents Leeds in every situation wearing the same expression of a self-assured gatecrasher waiting for you to prove he shouldn’t be there. Fling reasons at him: he’s a Championship midfielder, he’s not a pop star, he doesn’t score enough goals. He chews gum. You think so, do you? That’s not very interesting. 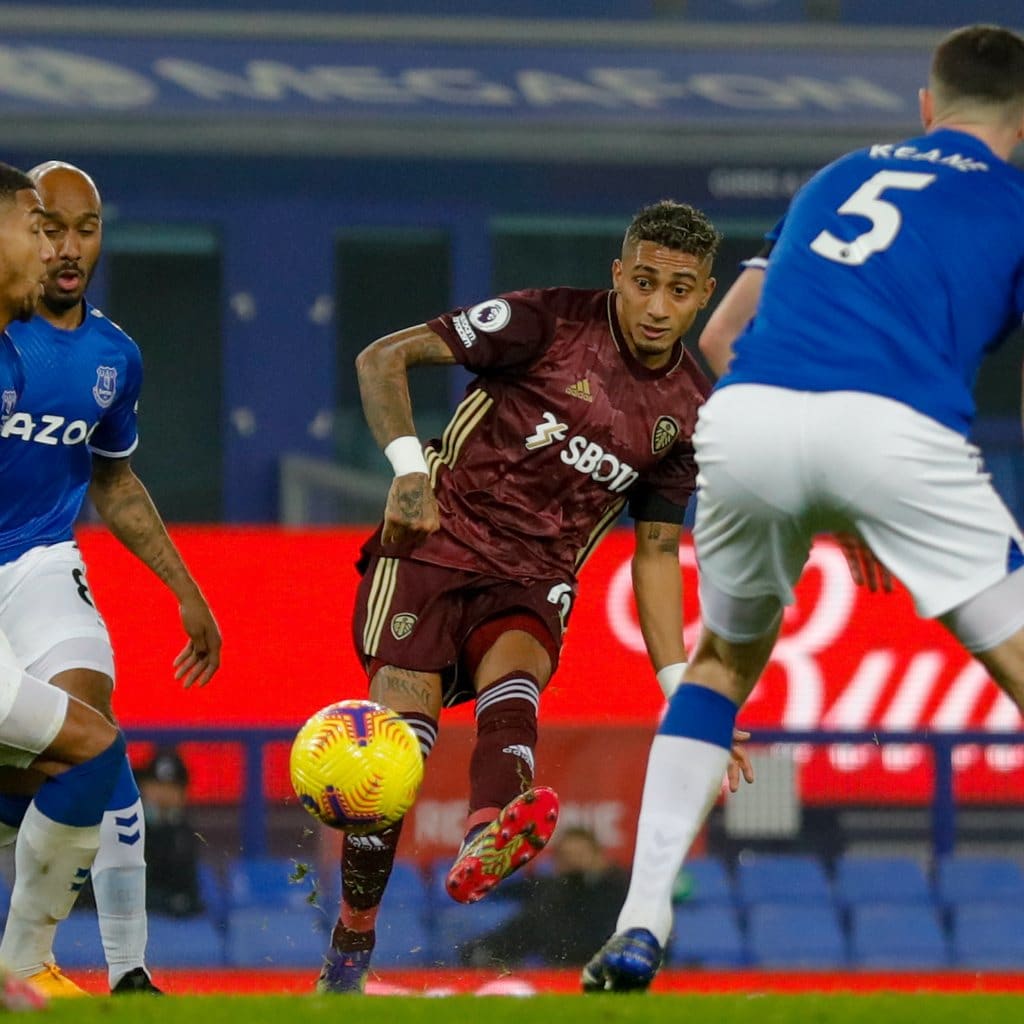 With Phillips dominating midfield with the silencing weight of a Mark Rothko mural (try Red on Maroon, 1959), his new teammate, Raphinha, is Toni Basil, a choreographer fusing art and pop. In his second start those first glance cliches skim read from his bio (Brazil! Flair! Samba!) are already falling away, revealing the truth of the detailed reviews that preceded him from France. He is a finisher: he finishes. The skill is undeniable, as when he dragged the ball back and twisted between defenders in Everton’s penalty area, but the aim was the same then as always: to finish. Raphinha thrills because he’s completely direct. Putting the ball on Jackie Harrison’s toes should have been enough for a goal, drilling a pass over half the pitch because only he had seen how dangerous Stuart Dallas could be was about choosing the fastest way to scoring. Or, seeing no passes, shooting into the bottom corner from the edge of the area as if beating the England goalkeeper from twenty yards was the only option and needs must. How Shilton must have winced. And Raphinha thrills in this team because that’s all Bielsa asks of him: attack when you have the ball, defend when you don’t. The aims are straight lines but the aesthetic choices at the barre are down to you, if they’re made towards that one purpose.

See also: Ian Poveda, on as a late substitute, trying to keep the ball in the corner but unable to resist the goalmouth’s siren song, dribbling between defenders to dash his body against the rocks and create a chance for Helder Costa. He’s the player most likely to jump in an ocean hoping to catch the sunlight.

You can’t say this was Leeds’ best game because they only scored once and it took 78 minutes, after more than ninety minutes without any scoring against Arsenal. But they’ve taken almost fifty shots in that time and it’s hard to say what Leeds could have done better. Or it’s easy, too easy, as Graeme Souness was the latest to prove. His and theirs is not a failure to think, though, but a reliance on thinking caused by suspicion. They’re figuring, decoding, looking for the catch. Football is a simple game but you’re not supposed to play it that way, and Bielsa’s Leeds are dropping short of expected professional standards by reducing all the Premier League’s expensive mystique to something anybody could do: attack, defend, attack again. If they make it look easy, how will we convince anyone of our expertise? How dare they be so simple, so daring?

Fans, though, can see through that cynicism, because we don’t have to think about things that we can feel. “It gave me an impression,” Bielsa said of Maradona’s dribble around England, “like when you see an architectural work of art, and you are astounded … for example, when you see a beautiful church and you are taken aback.” And as the winter rain persisted down the dark red brick walls of St Luke’s Church, Leeds United, in their dark not-red shirts, filled the silent terraces with their hymns to football in plain language, lifting us with simple joy. ◉