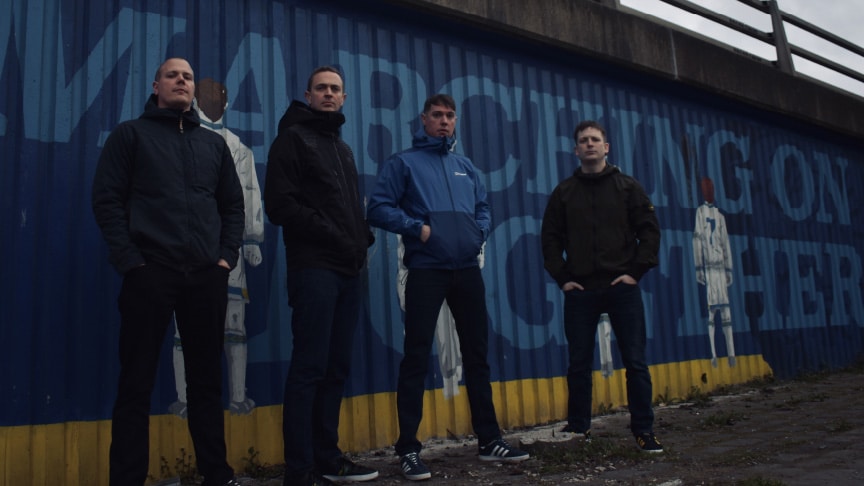 You know that feeling you get, when you’re talking to someone and you’re thinking, ‘How do you even know about that?’ and you’re completely baffled? Maybe that’s just me, but that’s how it was when Dave and I went to meet a group of Leeds fans for a natter in the Peacock.

These boys are York based band Skylights, and their knowledge of Leeds music gigs in the nineties completely blew my mind. Partly because I was at half of the gigs they mentioned, and partly because they just don’t look old enough to have been allowed to go into Leeds at night twenty years ago without their parents.

Eventually we established that they weren’t some sort of bizarre time travelling troupe going back in time to catch indie bands at the Town and Country Club and are actually only slightly younger than me, so I could stop being bewildered and actually ask some proper questions. Kind of. Without wanting to state the obvious, I never really have a plan for these things.

“These guys didn’t talk to me for a week”

So let’s start with the basics. The band are: Rob Scarisbrick, singer; Myles Soley, drummer; Jonny Scarisbrick, bassist; and Turnbull Smith, guitarist. Rob and Jonny are brothers, Turnbull used to play football with them. Myles and Turnbull had been in bands together before getting together with the brothers to form Skylights, and Rob has been singing since his school days. Turnbull had gone along to watch Rob perform at his school’s Battle of the Bands, in front of two thousand people at the York Barbican.

“I wasn’t really into bands,” Rob says. “I just wanted to pull a few girls.” The prize was a signed Seahorses CD with John Squire’s autograph. Turnbull wanted it so it changed hands, but there was a dispute as to whether it was acquired for a couple of pounds or swapped for a bottle of cider.

I wouldn’t doubt alcohol was involved in the transaction, judging by some of the boozy tales we were told throughout the evening. The guys have been performing together for well over ten years, and in their time have had their fair share of pissed-up gig mishaps. “We had a lot of opportunities, but I dashed them because I was an idiot. I loved every minute of it, though,” Rob says.

“We had a gig in York; I’d gone out at 11am and started drinking Guinness. I heard a girl on the phone, she said, ‘The lead singer can’t even stand up so he’s going to have a bit of a tough gig.’ When we got on, we were playing and I jumped off the stage and went to get a pint in the middle of the song.”

On another occasion, at a festival, Rob not only forgot the lyrics to a song, but forgot who he was. “I was just stood there thinking ‘What am I doing here?’ They were playing notes but they made no sense to me. My own song! Everyone was laughing in the crowd, it was so cringeworthy and horrible. These guys didn’t talk to me for a week.” All the result of drinking bottles of Hock with some Glaswegians camping at the festival.

The boys all say that’s in the past though, and they’re more professional now. “We’re not spring chickens, we can’t just go touring and be idiots,” says Rob. They all have families and full time jobs to keep up with, alongside being in the band. They’ve had a busy year so far, with sold out gigs in Leeds and more planned for the future. It hasn’t been easy though.

“We couldn’t get a gig anywhere, no-one would have us,” says Turnbull. And then the Belgrave happened. “I had to pay £400 of my own money to book the place, and then it just went mad! The next thing I know the guy is ringing me up saying there’s only thirty tickets left.”

“The Leeds community is great. Everyone’s helped us”

Skylights have had a change of tactics recently, and have gone down the route of shameless self-promotion on social media. “This time we’ve just spammed everyone in the world, anyone with a Twitter account will have heard of us now,” Rob tells us. And it’s worked, backed up by the brilliance of the track ‘YRA’. It was written a few years ago and was intended to be an anthem with a raw sound. “We don’t like it to be too perfect,” says Jonny. “Too many bands take themselves too seriously and want to get the perfect sound and perfect image, but people can see through it.” How do they achieve that raw sound? “We wing it!” laughs Myles.

We talk a bit about the band’s influences and the guys are, thankfully, like me quite firmly rooted in the mid/late nineties Britpop and indie scene, with a bit of another Leeds band, The Music, thrown in. Myles was more into rock, but the boys says this brings a different energy to the tracks.

‘YRA’ didn’t have much success until it was remastered with an accompanying video, produced by a student in York after Turnbull reached out to the university, and unleashed into the Twitterverse.

“I’ve been chatting to hundreds and hundreds of people through social media and I’ve met so many great people,” says Turnbull. “The Leeds community is great. Everyone’s helped us.”

“They’re just fanatical about everything, Leeds fans,” says Rob. “They take everything to the extreme. They get a bad rep but there’s so much more to them. They’re top people.”

But it’s not just Leeds fans who are getting involved in the Skylights rebirth. Turnbull explains that a certain Mr G. Berardi got in touch to say how much he liked ‘YRA’, and sent them a signed shirt. Luciano Becchio also often ‘likes’ their posts on social media, and the band use a photo of Rob hugging him as their logo.

“I was in the second row of the Kop and I thought, ‘if we score here, I’m running on and grabbing him,’” says Rob. “He came over so I ran on, everyone else was getting arrested but the steward just said to me ‘go back, mate’, so I got a big hug with him!” — and a photo on the back page of The Daily Mirror.

We get onto the subject of celebrities we follow and talk to on social media, and there’s some debate about how long to leave it before you message someone so that you don’t look like a desperate stalking weirdo. We didn’t come up with a definitive solution. Turnbull goes to check a message on his phone, and a smile spreads across his face. “How long should I leave it?” he asks, and shows us the message, from the one and only Josh Warrington. It could not have been timed better.

Having some high profile Leeds-based endorsement is only going to help propel the band even further, but the question was still there: coming from York, why Leeds? The answer is fairly simple: dad. Jonny tells us that they were never allowed to wear red when they were growing up. “You just don’t do it, do you?” Rob also explains that as a child he once had to borrow some shorts from school as he’d forgotten his, but when he got home his dad wouldn’t let him in the house with them on. They were Manchester United shorts, and he had to take them off on the doorstep. Their attendance dropped off in the late nineties, when they left school and were told they had to buy their own season tickets. “I was like, sod that, I only earn £150 a week!” says Jonny, who did go to games here and there, and was at Arsenal when Mark Viduka scored the goal that prevented Leeds from being relegated and Arsenal from winning the title. “That was absolute class. I was on the lash for 24 hours after that!” he grins.

After all that, there was only one thing left to discuss. The most important thing. Do any of them watch Vikings? Jonny is a Last Kingdom fan, which as you know stars another Leeds fan, Rune Temte. But with it being the beginning of April there was a more pressing TV issue to think about, and Myles asks who will be left standing at the end of Game of Thrones. It would be nice to think that our own Nikolaj Coster-Waldau will be victorious and Leeds will win both Westeros and the Championship, but you know how these things work. Your favourite character gets killed off when you least expect it, and Leeds tends to ‘do a Leeds’ and cock everything up, so we’ll just have to hope there’s not too much in the way of death and disappointment by the end of May. ◉