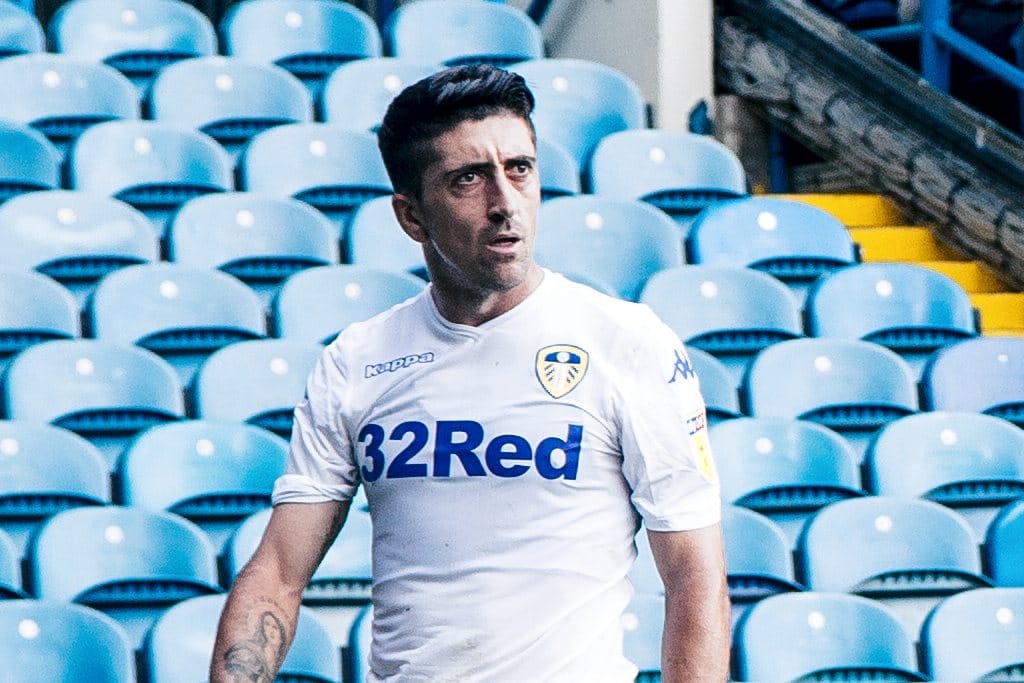 As this match crept into injury time, Leeds United had one recognised defender on the pitch; he was playing up front. The fourth official raised a four minute warning on his LED display and that was enough for United’s fans to look at each other, and say maybe. Maybe Leeds could still win this.

Leeds were losing 2-0 but the far-fetched idea of winning wasn’t an impossible dream; it’s what the players were still toiling to achieve. We’ve had more gifts than we deserve this festive season — seven wins, two incredible late wins, those videos of Kemar Roofe looking so serious in a Christmas jumper and sun specs — but perhaps the best present we’ve had from Marcelo Bielsa this year is a team that always plays to win.

In seasons gone by I would have been yearning for the final whistle so I could quit morose observance of such a drab winter’s scoreline, leaving the Hull fans in the away end curling their hands in the air like children, opening and closing their gobs like fish, singing about cats like fucking idiots. The only sound more miserable than ‘Leeds nil Hull two’ is their mewling.

But even before the miracles of the games against Aston Villa and Blackburn Rovers Bielsa has had us believing, even when the evidence hasn’t supported our faith. ‘Maybe’ survived until the final whistle against Hull — in stoppage time Mateusz Klich scuffed his umpteenth shot, and Roofe had a good header saved — but it had to fight. We still had hope, but we couldn’t take our chances really seriously, because the players couldn’t take their chances.

Hope might have been enough in previous seasons, when its return became a theme; we praised Garry Monk for allowing us to hope again when he took us to the edge of the play-offs, praised Andrea Radrizzani for inspiring our hopes when he bought Elland Road back, praised Thomas Christiansen for those hopeful days when we played like the Beeston Globetrotters against Burton Albion and went top of the league. Soon each time we had to shrug our shoulders and say, well, at least we can hope now. It was better than what had gone before.

But Bielsa is moving Leeds beyond that and I don’t think we’re satisfied with just being able to hope anymore. There’s a promise to deliver now, and in a harsh way losing to Hull was a breaking of the pledge. On one hand, winning eight games in a row would have been monumental. On the other, the odds Leeds had to overcome while beating Villa and Blackburn meant Hull City, despite their decent form, should have been beaten too.

United’s performance made me look back at the Blackburn game and frown. Before that day’s stoppage time heroics were ninety minutes when Leeds struggled to find a witty way through a defensive mid-table team, and conceded a sucker-punch equaliser; 1-1 would not have been a fair result, given United’s dominance, but it felt likely.

Leeds were much the same against Hull. 476 completed passes to Hull’s 132; 208 passes into the attacking third compared to Hull’s 60; 42 crosses to Hull’s seven; 22 shots to Hull’s nine; seven shots on target to Hull’s three. But the statisticians recorded no big chances for Leeds, and two for Hull — two goals.

United’s attacking was decent but, as the numbers suggest, indecisive. Pablo Hernandez didn’t land a through ball on Roofe’s foot the way he did on Bamford’s against Bolton; while six of those 22 shots belonged to Klich, all missed in different and frustrating ways. David Marshall made a good save to keep a Hernandez shot out of his top corner, and a header by Luke Ayling was cleared off the line. Ezgjan Alioski had his third good match in a row since returning to the right wing but couldn’t turn threats into a final ball, and Jack Harrison was decent but played the first half like he knew he was only keeping Jack Clarke’s wing warm. Clarke was duly introduced at half-time and caused his regulation panic, his body a corrupting swerve as he cut into the penalty area, but none of the Hull defenders could be enticed into bringing him down for a penalty, and none of his passes were finished off.

Tyler Roberts had a try as enganche for the last half hour and looked good; more energetic than Hernandez, he moved the game around and had the composure to stop, think, decide; but it’s tough for a not-quite twenty year old to dictate attacks for a league leading team. By this time, too, Hull had scored their second and, just as Leeds United wear the identity of their manager like an easily identifiable label, Hull had become the epitome of Nigel Adkins’ personality: smug and impervious.

Neither of Hull’s goals were any good from our point of view. For the first, Kalvin Phillips overrated his ability to pass out of a goalmouth scramble in his own six yard box, giving the ball straight to Jarred Bowen, who ended paper-talk linking him with a transfer to Leeds by shooting past Bailey Peacock-Farrell and running to the Kop with his hand cupping his ear. Bowen started and finished the move for the second just before the hour, winning the ball on United’s right wing and sending it towards Kamil Grosicki on Hull’s. Barry Douglas seemed confused by Alioski’s urgent arrival to help and let Grosicki wander past him and cross, where Peacock-Farrell did well to save Jon Toral’s close range effort, but couldn’t stop Bowen dealing with the rebound. Hull’s bench erupted because now the last half hour would be played on their terms: defending a two-goal lead while retaining a threatening counter.

Bowen and Grosicki were frequently more than Douglas or Ayling could deal with, and the break for the second goal was an unfavourable contrast to the wonderful moment at Wigan when seven players went hunting for Josh Windass when he dared to counter attack. But there’s something beautifully Loco about how, given what a hard time Hull’s wingers were giving our full-backs, Leeds soon opted to just not play any full-backs at all, Alioski and Jamie Shackleton notionally ending the game there but really instructed to attack. Adkins’ wingers couldn’t beat our full-backs if we didn’t have any, and he took Grosicki off.

I suppose that’s why I’ve been bemused by suggestions that Hull played well in this match. I guess they did, by defending sternly against United’s attacking kaleidoscope, withstanding long minutes of pressure as Leeds collected their clearances and began again from a new angle. But that just doesn’t do it for me at the moment. There were strong and not unreasonable arguments during the summer for a manager who knows this division, who could help us grind our way upwards without regard for aesthetics if only we could be promoted, but I’m glad they weren’t heeded at Elland Road. Nicking goals and defending leads isn’t where I’m at these days.

Even in defeat Leeds ended 2018 with the exhilarating attempt I described at the start of this report; using all eleven players to attack a deficit that to any other team would have looked impossible to overcome. It wasn’t being done in hope, which is the mistake we’ve made in previous seasons with what looked at the time like dawn. It was a statement of Bielsa’s belief that no game can ever not be won, and it was a statement of the players’ belief that they are the team that can always win.

Leeds United lost, because they didn’t play well enough to beat Hull City. That’ll happen sometimes. But they have the sort of faith in themselves that can endure beyond scorelines, beyond stoppage time, beyond defeats, and always on to the next challenge. That’s what 2019 will be, now: a challenge. ◉