Leeds United 0-4 Manchester City: Not that 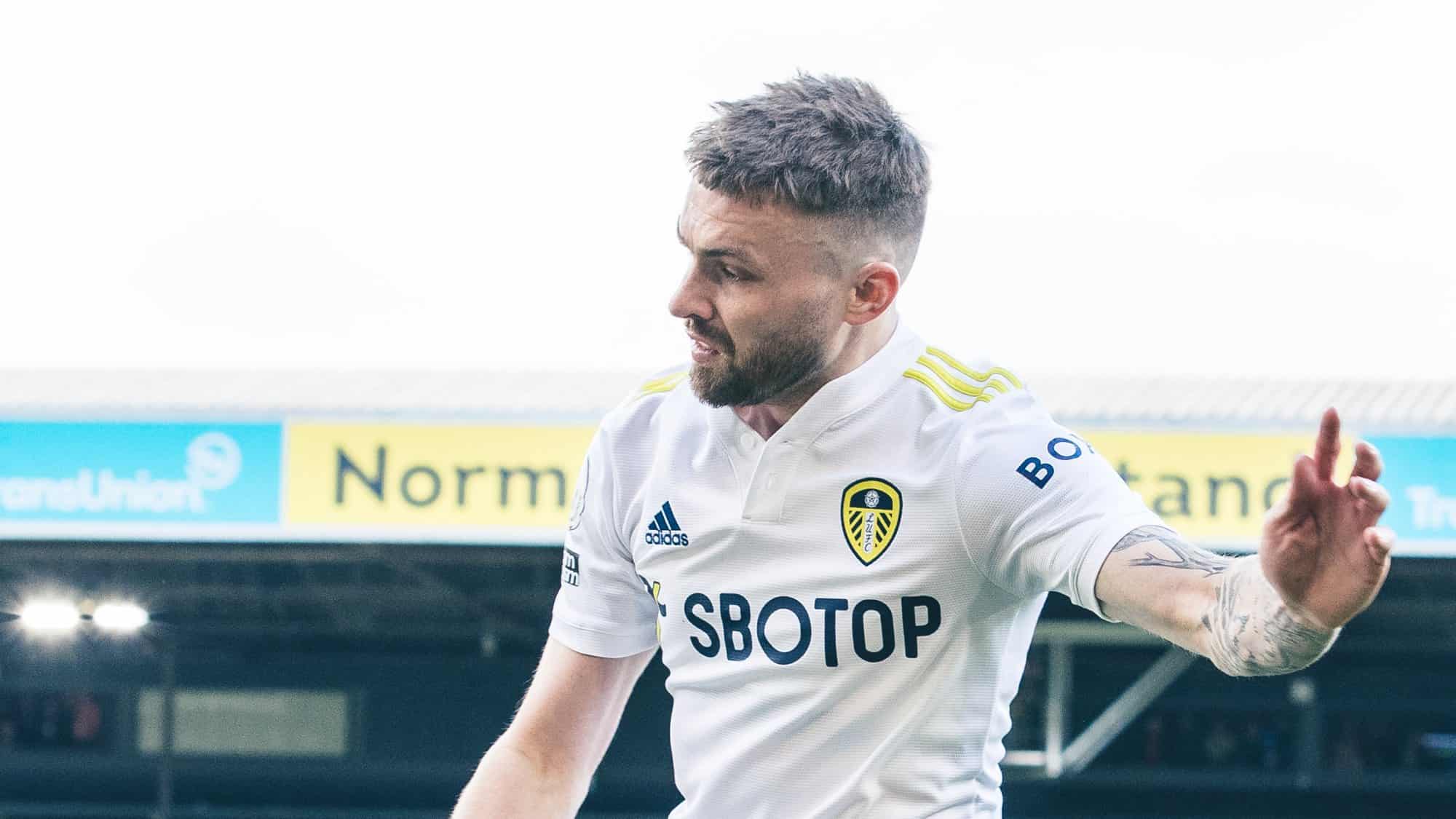 Against Manchester City on Saturday, Leeds United had little to no chance to make things better for themselves at the bottom of the Premier League. Burnley had influence, and used it by beating Watford; Everton did all they could, beating Frank Lampard Junior’s inconsistent old boys Chelsea at Goodison Park. Leeds can’t rely on others during the rest of this season, but we can’t stop them doing them, either.

The impossibility of United’s weekend was summed up by their playing much better than against Crystal Palace on Monday, but losing 4-0 anyway, while losing Liam Cooper to hopefully a minor injury just before the game and Stuart Dallas to an awful one during it. All the while, Elland Road sang and chanted and cheered. As they proved at Selhurst Park, Leeds fans don’t need a drum. They don’t even need goals or a win, either. A club-organised pre-match tifo? It gave the East Stand useful paper armament for pelting Jack Grealish, but otherwise I’m not sure why Manchester City were greeted by a card display spelling ‘Yorkshire’, as if Knaresborough, Doncaster and Hebden Bridge were coming together to intimidate the Premier League champions. At the end of the game, OptaJoe pointed out that, in the 19-3 aggregate, Leeds have conceded more goals to the two Manchester clubs in one season than any top flight team before. Yorkshire, Yorkshire.

A working relation of ‘Yorkshire’ to Leeds United depends on the addition of words like ‘Pride of’, because that’s a contested status among the county’s many clubs that we claim, or ‘Republican Army’, the Leeds song that puts us at the vanguard of a Yorkshire separatist movement that’s hard to market as Premier League friendly. The point is that our club is in the biggest and best city in Yorkshire, but we’re not much arsed about using Leeds United to represent all the other towns and cities that aren’t as good. If Yorkshire means Bradford and Huddersfield, we’ll just be Leeds, thanks.

The tifo was a trifle but it’s symbolic of a club not understanding how to be its best self at the moment. The atmosphere, particularly the way it sucked in City’s fourth goal as if it was scored amid an interstellar collapse, was incredible, but Jesse Marsch’s attempts to tap into it, pumping both fists in the air as he strutted down the tunnel at full-time, struck an odd tone after a 4-0 defeat. Our job is to cheer, and we did it. Marsch’s job is to make the team win, and he didn’t. There’s a dysfunction that keeps cropping up in his press conferences, sometimes about how the fans need to learn about his tactics to know when to cheer properly, sometimes about him thinking the players have been frightened to play in front of us, when I’ve never known a beleaguered team get so much backing. The best way to encourage the best support at Elland Road is to let the crowd do what it wants. The players, lapping and clapping at full-time, know this, taking the support in without trying to compete with terrace hysteria. Leeds fans don’t need cheerleading to do Leeds fan things.

The football, too, feels off, although Manchester City don’t usually let teams play much of it, so it’s to Leeds’ credit that there was as much as there was. But Raphinha, booting an up and under into the air towards the penalty area, did not look like he was making best use of his considerable talents. Jackie Harrison, as well, dribbling headlong towards the middle of the pitch, where all City’s really good players were waiting to tackle him, was playing in self-sabotage mode. For good spells at the end of the first half and at the end of the game, Leeds were dangerous, maybe something close to the counterpressing and attacking that might one day be in store. But none of it looked like the natural, simple evolution that was talked about when Marsch took over. There’s a lot of chat around Elland Road now about the signings we could make to get the best out of his football next season. The more important task was and is for his football to make the best of what’s here now, because if it doesn’t, next season might never come.

The goals were poetically frustrating. United’s defending of set pieces had improved enough lately to be commended; of course they conceded from two, making the game unwinnable, no matter how well they defended in open play. For that purpose, we got a new team shape, damaged by a pre-match injury to Liam Cooper, on whom so much depended in the last two clean sheets. Three at the back with wing-backs looked solid enough, and would Cooper have made the difference on set-pieces? We’ll never know. It might all have been different if Rodrigo, seizing on an early mistake with proper gegenpress ceremony, had squared to Raphinha to make it 1-0; squandering the chance to take a lead to defend was agony. It wouldn’t have made much difference if Dan James, skipping around the goalkeeper and shooting in the last few minutes, hadn’t had his shot blocked on the line. We might as well forget about the sucker punch fourth goal that concluded the game as neither here nor there; their third was a wonder of surgical slicing, but not many teams can do that like Manchester City do. Split the difference and let’s call it 0-0.

What is the difference between 4-0 and 0-0, or the 1-1 we got against City last season, or the 2-1 win at their place, and the aggregate 11-0 of this campaign? Answer that, and you could unlock the mystery of Leeds United, 2021/22. From the stands we might never know the reasons, we can only look at the effects. The day’s most potent symbol was not the tifo or the tornado of paper, but Stuart Dallas, committing to a tackle with Grealish, pounding the grass in pain as he held his leg as still as his instincts were telling him, the knee broken somewhere. Dallas’ legs looked bloody great at the Etihad last season, as he ran away from scoring his iconic winner to celebrate in front of nobody; he looked bemused when that won goal of the season, but nothing summed up our exhilarating rise better than that win against the odds. It seemed odd before the game that Jesse Marsch hadn’t watched it, and didn’t know which team got the red card, because there was no better example of the character and commitment of the players he has inherited, of how second division players with top class characters have led us to the top. And there’s nothing surer than, a year later, Dallas paying for poking that one in the eye of the champions. I often lean on a line from iconic Yorkshire drama This Sporting Life, when the factory-owning chairman of the local rugby league team threatens that a rising star player with too much attitude ‘will have to learn he has to pay something for his ambition’, but it is persistently relevant to the way Leeds United Football Club, over the years, have been punished every time we’ve dared to encroach on the glory that polite society prefers should belong to others. If we can’t find a scientific explanation for this season, we can try one that depends on a pecking order that never allows Leeds in its upper reaches for long. The 1980s were revenge for the Revie era. The 2010s were revenge for the millennium. This season is revenge for last season, and Stuart Dallas’ knee is a symbol of what it has cost.

The only way out is defiance, to stay up against the odds. A line from another key northern artwork, Nottingham’s novel Saturday Night and Sunday Morning, gave the title to an album by Sheffield’s Arctic Monkeys: ‘Whatever people say I am, that’s what I’m not’. Leeds will never be what anyone else wants them to be, and that includes anyone who has ever owned or managed the club and thought they could tame it, and includes anyone outside the club who wants United down and out this season. Had City scored five, or six, would Elland Road have just got louder? It might have been like screaming into a void, or trying to stop a great team with a paper dart barrage. But the Premier League’s sole Yorkshire contingent don’t sound ready to leave. Against Arsenal, Chelsea and Brighton next week, the team has to work out what to do with that information. ⬢