Who knew, when Leeds missed qualifying for the Champions League in 2002 and sacked David O’Leary, it was the beginning not only of a fall so dramatic its Wikipedia definition endures twenty years later, but of a redemption that made Elland Road the perfect venue to protest against clubs now refusing to risk going through the same?

Hereford. Histon. You want to play Barcelona every week? Try Carlisle. Actually, do, try Carlisle. It doesn’t sound attractive, but Liverpool, trust us. Until you try it you’ll never know.

I wonder what part Leeds United plays in the minds of the people behind the European Super League. Our last sixteen years is the exact scenario the Super League is designed to avoid. Andrea Agnelli, the Juventus chairman leading the proposals, should know Leeds well. His father, Umberto Agnelli, came here to buy John Charles in 1957, negotiating in the offices of Waddington’s factory — where the Monopoly board game was made, and its playing money printed — then in rooms 233 and 222 of the Queens Hotel. Charles remains Juventus’ greatest ever foreign player, and his transfer is the kind of story a father passes to his son, along with ownership of the football club.

Charles was for sale because, after years trying to get him and us into the First Division, within two months of getting there Elland Road’s main stand burned down. Typical Leeds. It cost us the world’s greatest player, but it’s a story we still tell about the club we love, because these are the stories worth telling about football. If Agnelli and the breakaway clubs are sincere about generating more excitement and drama than they think West Ham can offer to the Champions League, they should be encouraging more Leedsness, not less. Chelsea versus Manchester City might promise a match of great technical quality, but in a league of twenty that only one club can win and none can be relegated from, is that enough to capture attention, and imagination? To Leeds fans, Hereford is a state of mind, with its own value. It made some of us the people we are.

Such is the hubris of clubs like Chelsea and City not wanting to go there, they’ve forgotten they were a Second Division fixture in 1988/89. Any six clubs could have paused history to suit themselves, and often they would not have taken Chelsea or City with them to the golden future. It’s hard to make a case for half the teams included now. A comparison can be made with the Premier League, created for similar reasons, presuming quality and interest could be increased by protecting what was then a big five. They won the economic war but sporting battles kept them humble: of that big five, Spurs and Everton have never won the Premier League, and Liverpool only just managed it now. Manchester City’s initial response to the growth of the richest league in the world was to get relegated to the third tier.

The idea that even a closed Super League will solve whatever these clubs think the problem is seems doomed to fail in practice. The founders are obsessed with becoming permanent winners, but football is a game that will always be dominated by losers. Even with every advantage of economics and exposure the founding clubs believe the Super League will give them, each season only one of the fifteen can win. Fourteen clubs will lose. One of them will finish 15th. Let’s assume it’s always Arsenal. When the viewing figures plummet for the lowest ranked franchises, what then?

I wonder. The few details, leaks and claims about the Super League’s plans so far hint at changes far beyond ending relegation. The founders claim UEFA won’t let them innovate; their documentation hints at enhanced technologies. Real Madrid president Florentino Perez is thinking in terms of attention spans and game length. Agnelli believes Covid-19, cutting amateurs off from playing and fans from stadiums, has exposed the death of grassroots interest in football, and that the future is Generation Z, who so far haven’t been listening. “We have new targets who are not your classic football fan,” Agnelli has said, “millennials, women and kids. We have to ask ourselves what is the little girl in Shanghai and the millennial in Mexico City thinking?”

The traditional fear has always been games of four quarters rather than two halves, but a truly closed, rogue Super League offers scope for changes beyond anything previously imagined, and new problems to justify them as solutions. The founding clubs anticipate generating billions more in revenue, but how? If a Champions League match between Inter and Chelsea on a Wednesday night isn’t appealing to the TikTok generation now, what will change so it’s worth billions in the Super League?

A League without relegation is a league without drama, unless you script it, like pro-wrestling. We wondered how Arsenal could ever win, and there’s how. Or for something more organic, what about always-on docudrama access, behind the scenes and in games with mic’d up players, so fans can follow Cristiano Ronaldo’s storyline from the breakfast table to the corner flag? Separated from current youth development structures, and demanding engaging personalities as well as soccer skills, could the Super League become a K-Pop style talent farm, where the broadcast revenue is less reliant on midweek clashes between Milan and Liverpool, more on new fans’ emotional investment in the nightly soap opera tears of a young player and his family striving, in primetime, to become the next Zlatan?

It all sounds a bit much, but it’s the unsaid logical conclusions of everything Agnelli says he wants from the game. Football is entertainment, and BTS are pretty much the biggest deal in the world, so do that and get the money. But BTS are not alone. Taylor Swift, for example, is also doing very well out of the entertainment business, with a product quite unlike BTS. They share charts and platforms and in some senses compete, but one does not seek to obliterate the other. T-Swizzle is not panicking about BTS’ success, or vice versa.

But football is panicking, or at least Agnelli is, despairing as rising debts meet declining ratings in a pandemic. But for him to look at the Gen Z darling of the day, TikTok, an infinite video clip show where a secret algorithm can make anything popular, from fifteen seconds of Sunday league football to a pasta recipe, and decide the answer is dominance, is to completely misunderstand the generation he’s obsessed with appealing to.

Thanks to TikTok and YouTube the path to fame has never been shorter. But as a result the path to dominance has never been more crowded. With so many choices, niche tastes are quickly satisfied and a mainstream no longer forms as it did when we waited every week for Top of the Pops or the NME to select our new favourite bands for us. When Agnelli worries that I’m not spellbound by Juventus playing Atalanta in the Champions League, the competition doesn’t only come from viral dances and online gaming, but a video library offering all Juve’s greatest matches on demand, or cinema’s greatest movies, or half an hour of cats doing the funniest things, or a streaming EP by some cool kids with an emo band and a bedroom following local to the other side of the world, who happened to come up in one or the other of my streams. You want to dominate that? You won’t, you can’t. But like that band, you can still flourish, by being involved, being relevant to my interests, being good, and — a key for Gen Z if there is one — being authentic. All the things the Super League wants to throw away are the things their new audience appreciate most. The clubs just have to accept that audience share ain’t what it used to be, and go with the flow of the new streams rather than trying to Canute their way into command. 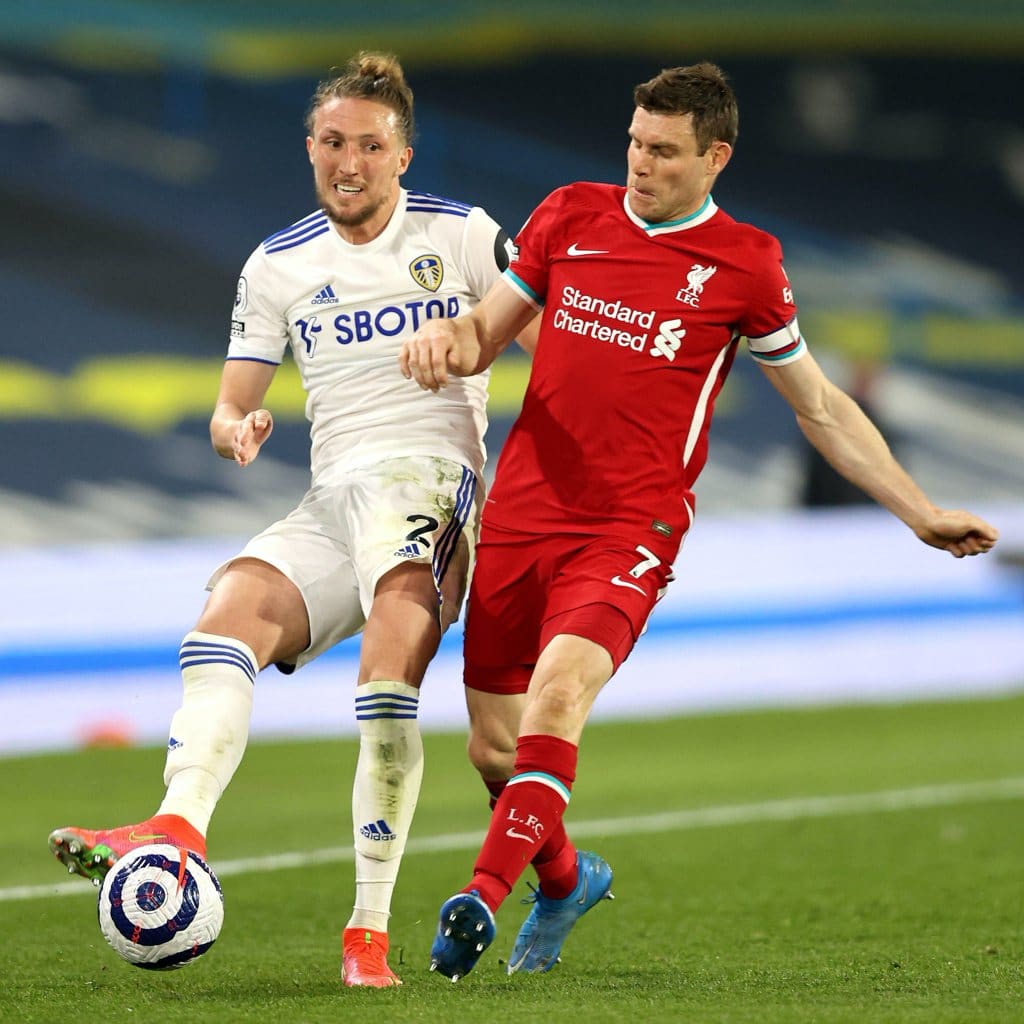 Exciting things can happen when you’re part of a world you can’t control, which has always been one of the pleasures of football. It’s an old joke to say the best part of the game was the kick-off. But while that one game in the gag might have been a write-off, a low quality encounter keeping Agnelli awake at night, it’s the reason why the sport endures. To be there at kick-off wondering what might happen next.

At Elland Road on Monday night there was a Premier League match between Leeds United and Liverpool, taking place in a world Jurgen Klopp couldn’t control. Stalking around the stadium seething about t-shirts and banners, his famous smile was twitching into the snarl of an upset dachshund. I don’t imagine angry fans chasing a bus through the streets is behind the scenes content a Super League will incorporate, but Mr Agnelli, what a story this all was! The dramatic scenes outside the stadium! The passion of Victor Orta in the empty stands! The game was exciting enough, but enlivened by Ezgjan Alioski’s new hairdo, like a b-movie love-robot. Is the video of him getting it did on TikTok yet, are kids up Beeston Co-op grabbing peroxide from the shelves?

At one point Luke Ayling and Andy Robertson were laugh-arguing about a free-kick, and the cameras zoomed in close, where no hands were covering mouths to obscure their conversation — content gold. The sport swung Liverpool’s way, as they played with fury and took a first half lead, then back to the protesting underdogs in the second half, Pat Bamford hitting the bar, Tyler Roberts missing a sitter, Ian Poveda charming the teenagers who want to be him and the teenagers who want to kiss him, Diego Llorente eventually getting an equaliser. And even then it wasn’t over: the post-match was just beginning, Jurgen Klopp treating his press conference like a Big Brother diary room to vent his spleen about Gary Neville. All the clips were soon up on Twitter, the goals, the incidents, the G-Nev clapbacks.

Elland Road was full for the final home game of the season, as Bassett’s Blades came to town, with danger man Brian Deane leading the line. The Whites took the points thanks to a terrible defensive error as the capacity crowd saluted a fine season on the team’s lap of honour. With levisolicitors.co.uk/thesquareball.