Leeds United are exhausting. Marcelo Bielsa is one manager opposing players must want sacked, bags packed, out of the Premier League. His gruelling murderball sessions are notorious, but that’s his own squad and their own business. What right does he have taking that energy into league fixtures, forcing other teams to raise their game, to match United’s physical effort, to work so hard for three points they can get elsewhere without the same strain? 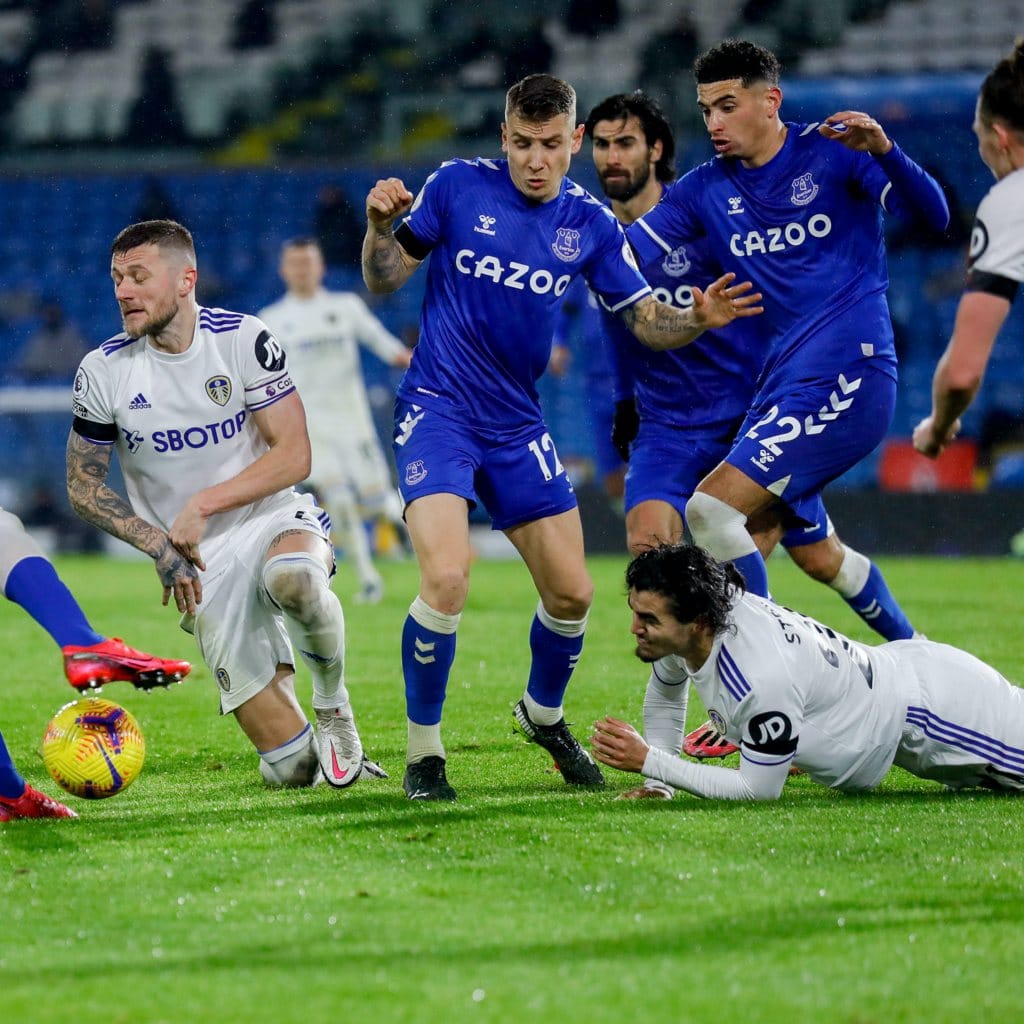 Opposing physios will agree. Although this season’s defenders contradict the theory, fitness is an important part of Bielsa’s concept. His staff work hard to keep his players strong enough to keep working hard enough; if he’s running them into the ground, it’s ground he’s prepared that will help them recover. Other clubs don’t have the benefit of Bielsa’s study into his own physical consequences. Pity the medical staff at Everton, counting the weary on the morning after playing Leeds, the masseurs working overtime to soothe aching limbs. James Rodríguez is an important Everton player, said his manager Carlo Ancelotti, and that’s why he stayed on the bench, safe from the madness.

In the Premier League this season, on average, Everton’s goalkeeper has made 2.8 saves per game. At Elland Road Robin Olsen made six. His wrists and palms played a big part in ensuring Everton’s 2-1 win was not a 4-2 defeat. If all he could text to his old mate from Malmo, Pontus Jansson, was a tired-crying emoji after the game, it’s because that’s all the strength his phone-fingers had left in them.

Every Leeds game is a shrieking whirlwind compared to anything else in the Premier League. Part of the reason is a boundless belief that victory is always possible, and that had Everton swinging wildly off the ropes at Elland Road, boxing blind until they could believe in the final whistle. Another part of it is the almost deliberate anarchy Leeds bring on the pitch with them. There is something hysterical about Liam Cooper choosing the most difficult pass out of defence and making it by one whisker, about Illan Meslier booting the ball at Dominic Calvert-Lewin as if he just wants to see what happens.

It’s yet another way that Bielsa has proven to be the perfect manager for Leeds United Football Club, by inverting the previous decade and dragging the carnage out of the boardroom and onto the pitch where it belongs. In the mid-2010s Massimo Cellino was running Leeds United as if he woke up every afternoon in the enchanted bed from Bedknobs and Broomsticks, flying through the sky or plunging into a lagoon, screaming at Terry George and dancing with his dressing gown. An average week might include hiring a new manager while he still had one, a press conference with enough plot twists to defeat Danielle Steel, a newspaper expose and an FA tribunal. The average Leeds fan approached the weekend already worn down, and it was a relief when the football was mundane. Cellino once growled down the phone to a fan that Elland Road was blighted by devils, witches and evil snakes, and supporting Leeds at the time was like watching him fighting them all in a Disney animation of his own conjuring.

Leeds is no longer like that. In recent weeks a transfer window, new investors and a new pitch have been negotiated with minimum drama or social media outrage. Now Fantasia means football, although the witches are still a problem, a shadowy coven about the West Stand roof whose curses mean grass will never grow right in Beeston. Theirs is playful magic, though, causing elite footballers to slip and slide as if they were playing on the similarly blamed ice rink down the road, that once blew down mid-construction in the stiff wake of swooping broomstick flights. Chaos can be beautiful, and at Elland Road, it’s Ezgjan Alioski running off camera, then appearing again, his feet on the air and his head on the ground.

United might not have needed their second half siege of Everton’s goal if they hadn’t let Everton score twice in the first half. The first was done inside ten minutes, when cackling could be heard under the eaves. Leeds were knocking the ball around the way they couldn’t on the old pitch, until Jackie Harrison slipped on the new one while passing across to the wing. Richarlison intercepted, André Gomes passed into the corner, Lucas Digne crossed, and Cooper and Kalvin Phillips each left Gylfi Sigurðsson to the other, nobody and nothing stopping him from scoring in the six yard box.

The second was arguably the most mundane moment of the match, Sigurðsson’s corner being flicked on, Luke Ayling putting his head in his hands when he realised Calvert-Lewin was putting the ball in at the back post without any company. But sometimes you have to admire United’s commitment to not defending corners, because it raises the stakes. The bigger the lead you’re chasing, the bigger the thrill, perhaps.

It wasn’t a night for changes. It was a night for Leeds to be better at being Leeds in the second half. After two minutes of it Raphinha, the best Peacock, was hovering while Yerry Mina and Mason Holgate played Hacky Sack with Harrison and Pat Bamford on the penalty spot, and when the ball bounced to him, he rolled it into the bottom corner. A winger like fireworks, he stepped aside from the explosions around him to strike like a safety match and get Leeds into the game.

Raphinha had set Alioski up for the goal of the season in the first half, pinging a corner onto his boot, from where it was volleyed off the base of the post. He put Everton in trouble again on the hour, when they thought they were strolling to safety by playing from halfway to their keeper. Nope. Bamford chased and Harrison joined him, waving others forward and pointing to them where to go; now everyone on the pitch was sprinting towards Everton’s goal and there was no calm. Raphinha won the ball on the right where his stepovers were as natural as springwater and his cross was close to the Harrison and Bamford mark, but cleared; Alioski kept things hectic, cutting a clever ball from the byline to Mateusz Klich, whose shot was mishit, deflected, saved, kicked off the line away from Bamford, then saved again from Raphinha.

You sometimes wonder if other teams aren’t tempted just to give Leeds the goals they want just to get some peace. Maybe in the Championship, where United loved late equalisers and winners, but Premier League sides are sterner. Bielsa sent on Tyler Roberts, Pablo Hernandez and Helder Costa, new angles, but Hernandez ended up in a desperate losing chase after Calvert-Lewin on the break, who couldn’t beat Meslier. Leeds kept striving. Deep in stoppage time Dallas and Raphinha won the ball together, the latter giving Bamford space in the penalty area to cross; but when Leeds needed a six yard tap in, they got Tyler Roberts slicing a sixteen yard half-volley high over the bar.

There was something there for Leeds until the very last, and it wasn’t effort or tactics or the pitch that denied them. Perhaps it wasn’t quality, either. In sport a team wins and a team loses, and when Leeds are pushing that decision into the final seconds it’s their proclamation in the Premier League. Teams might take points away from Leeds United, and plenty of them. But they can’t look forward to doing it, and they must be relieved when it’s all over. Leeds, meanwhile, are looking forward to doing it all over again. Exhausting? Apparently not for them. ◉