The game in which, once and for all, Marcelo Bielsa’s Leeds United are found out. The game that exposes and prods every weak spot, when the players don’t have blood on their boots but glue. The game we endure without hope because we can see the disaster looming, a whisper in the clouds at every set-piece. Leeds scored an early penalty but West Ham headed in twice and that was that. And in the evening after Bielsa was named one of the world’s three best coaches of the year? That’s new, but feels so old.

It’s the game that leaves the players looking as dejected in front of the press as they did on the grass, when their shell-shocked expressions in the post-match interviews match up to their horror when a ball crossed overhead like a grenade. When Mateusz Klich sighs and murmurs, “It feels like last season … we should have scored more goals, but didn’t.” 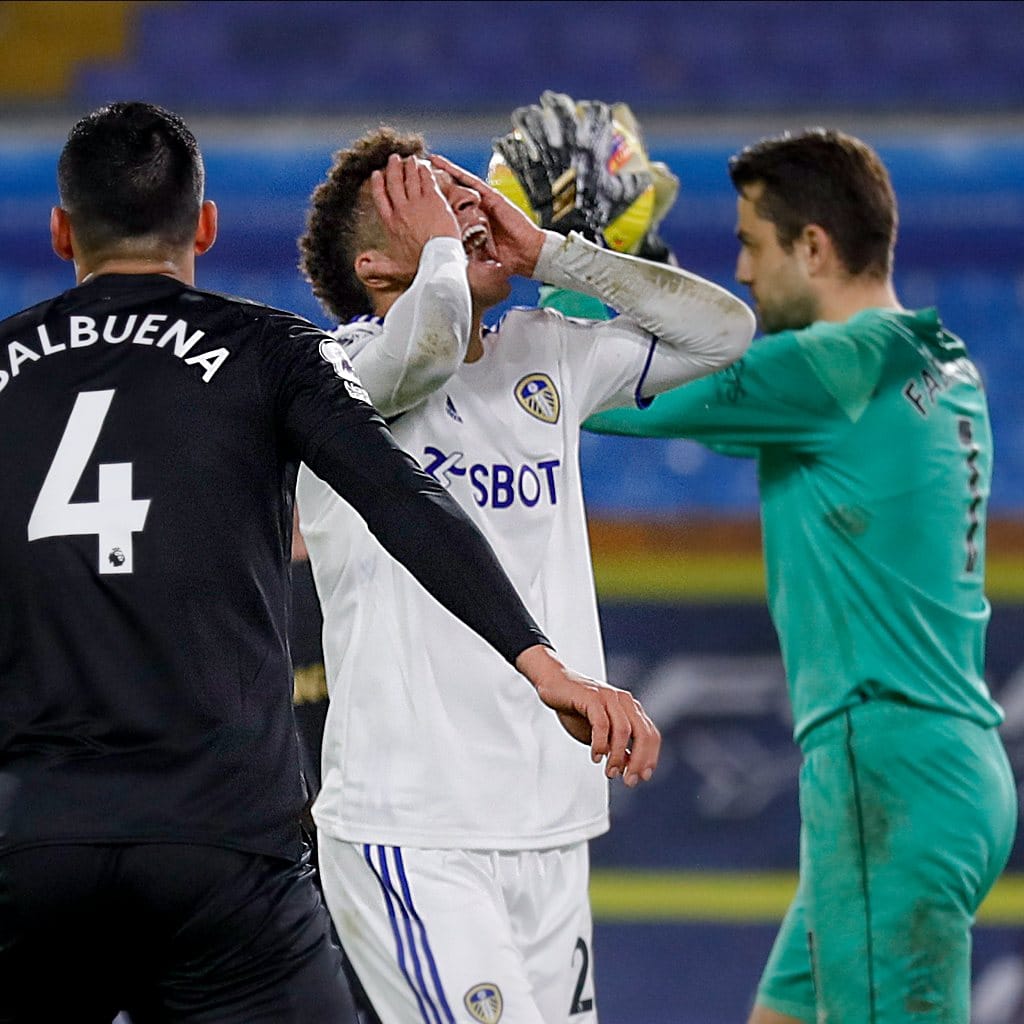 Actually, that was last season, after conceding a late equaliser to Nottingham Forest at Elland Road in August. This time, after losing to West Ham United, Klich said, “We couldn’t score, [but] we had to score more than one goal, because we knew they were going to be very dangerous from set-pieces, and it happened again … We dominate, we create chances, and then that happened … It’s not the first game like this, and probably not the last.”

Quite so, Mateusz, on both counts. Bielsa tries to warn us that every game is just another chance to flail against the quicksand of failure: after every win there’s another game, after every title there’s another season; a FIFA award nomination only takes a coach one day closer to losing their job.

I still remember the doomed satisfaction of half-time against Cardiff last season, when Leeds were wrapping up the league for Christmas. A month later we were at Loftus Road, repeating one of the previous season’s disasters to end them all, although this time Bielsa was careful not to be photographed despairing in a corridor. We said it in 2018/19, we said it last season, several times, and we’re saying it now. The same old failures and the same old faults will mean we’ll never get nowhere.

Obviously that’s not true. Leeds United may not have learned how to defend corners since summer 2018, but by winning promotion anyway they solved a problem blighting the club and city since 2004.

What happens now, though, might tell us something about Bielsa’s true attitude to The Set-Piece Problem, now of such proportions it should be written across the East Stand’s empty seats next to Marching on Together. “The set-pieces can be perfected by continuously training them,” he said after this game. “We will continue insisting on this until we can resolve the problem.” The next part was probably the most revealing of a terse discussion: “The problem we’re having, we’ve already had it before in the past, we resolved it, and now it’s happening again.”

Which is that Bielsist fatalism, acknowledging football’s constant tendency towards eventual, inevitable failure, coaching as whack-a-mole. You resolve your finishing problem and set-pieces go wrong, you resolve your set-pieces and your chance creation drops, you resolve your chance creation and your finishing goes wrong. The job of a coach is to resolve the problems as soon as possible after they arise, and prevent too many from making it to the pitch at once. Suggest to Bielsa that he could resolve all a team’s problems at once with no chance of them recurring and he’ll refer you to a famous earlier answer about a team of robots.

A team with some taller players might be a start for Leeds, and it’s only fair to wonder if Robin Koch (6ft3in) and Diego Llorente (6ft1in) aren’t resolutions being denied to Bielsa by injuries. But Pascal Struijk (6ft3in) made it to the bench, which Bielsa regards as a seamless extension of the first eleven: if you’re good enough to sit you’re good enough to play, and Struijk did play on the opening day at Anfield. Putting him on the pitch might help more than set-pieces; Luke Ayling can go to right-back, Stuart Dallas to left-back, and perhaps the team will breathe more easily with Struijk for Koch as a like-for-like change instead of Ayling playing like a centre-back, Dallas playing like a right-back, Ezgjan Alioski like a left-back. But I will hide behind your shoulder while you raise the subject of natural positions with Bielsa.

That outcome would also be harsh on Jamie Shackleton (5ft6in, attacking midfielder), who looked very bright as the second half’s right-back against West Ham. He couldn’t compensate for the dim players around him, though, including Helder Costa who came on the pitch with him at half-time and seemed to instantly regret is as much as everybody else; and Jackie Harrison, who Costa replaced after 45 minutes of desultory effort down the left with Alioski.

Leeds had a good start, Liam Cooper winning the ball and splitting West Ham’s defence with a pass that put Pat Bamford through. Lukasz Fabianski brought him down and, after VAR gave him a second chance, Klich scored the penalty. But the way the lead was taken threatened all the disjoints of the game that followed. Four minutes elapsed between the foul and West Ham kicking off again, so the game was six minutes old before we saw players doing much apart from standing around while the referee argued with West Ham’s sulking goalie.

It set a listless tone. Klich might think Leeds dominated and created chances, but the best chance didn’t come until the 90th minute, when Rodrigo headed into Fabianski’s hands and screamed. Between while West Ham headed in two set-pieces, and Illan Meslier stopped them scoring at least three more by other means. If you are craving excitement during United’s current difficulties, I recommend queuing up clips of Meslier’s saves, and trying to ignore what led up to them if you can.

Leeds never really asserted themselves, largely due to Saïd Benrahma. He was marked by Kalvin Phillips, although West Ham say it was vice versa; either way, he kept running to the wings and where he went Phillips followed. That left a big hole in front of Leeds’ defence that West Ham were pleased to occupy, chased by their markers; Raphinha, dangerous in flashes, kept sinking towards his own penalty area, Bamford coming deep in forlorn attempts to throw him a rope that could start a counter. They were too far from goal and too far from each other, and had too much West Ham in their way. This might be why Pablo Hernandez stayed on the bench; he could have unlocked West Ham’s defence, true, but would he have got the chance between huffing and puffing and pursuing Declan Rice downfield?

“This game is different to probably any other you play in the Premier League,” said West Ham’s manager, David Moyes, after they’d won. “Leeds have got something different.”

That means other teams have to change their ways to beat Leeds, which is a compliment. The problem comes when teams change their ways and win, knowing Leeds won’t. Whether Bielsa’s refusal to play their game and change his team is wise or foolish is the grand experiment he set out in coaching to investigate. The evidence so far at Leeds is in his favour. Yes, we’ve been through games like this before, and we know this sinking feeling very well. “It’s not the first game like this, and probably not the last.” But look where we ended up — well, not ended. A title is never the end and success is never permanent, and this game, uh-huh, will have its time again. ◉