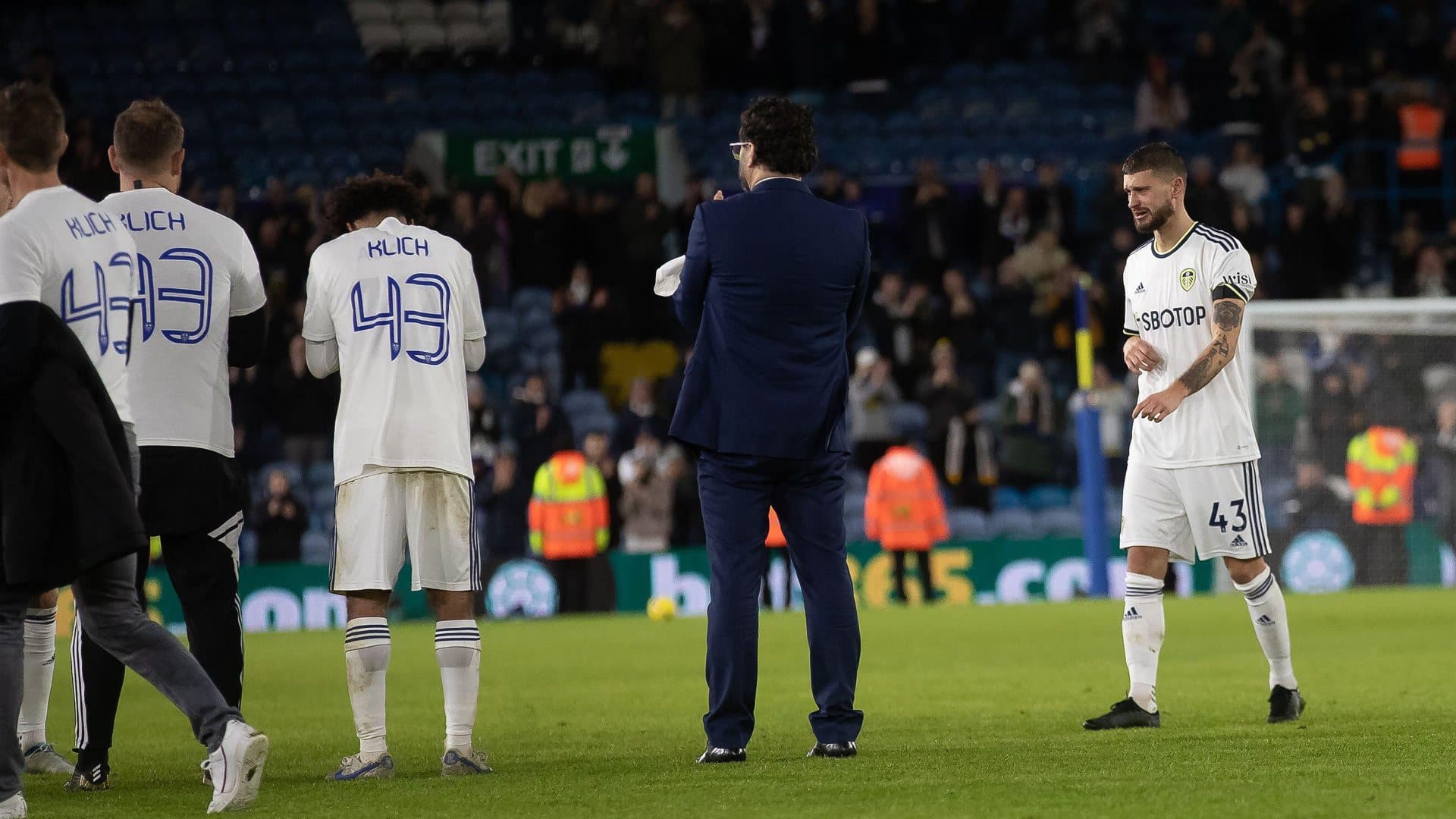 For half an hour I thought, through a prism of the past, I was seeing the future of Leeds United, at least for the rest of this season. Brenden Aaronson’s 22 years of talent, stretched by the Premier League and the World Cup, snapped, giving a goal to West Ham. Crysencio Summerville, also cracking in his youth, was subbed off instead of being sent off for leaving immature retributive stud marks just below Vladimír Coufal’s knee. In their place came Jackie Harrison, who from deep in midfield fed Rodrigo with irresistible passes straight and through West Ham’s defence, that had to and did find at least an equaliser. And, setting the tone for the comeback with desperately necessary drive from midfield, was Mateusz Klich.

These were two of the players who have delighted us since 2018. Frustrated us, too. Klich had yet another impressive night from the bench, and still managed to miskick a shot sending the ball so high, and so far away from goal, that he could run over and win a tackle for it before it came back to earth. That was Klich for Leeds, nearly 200 times: influential, imperfect, committed. Aaronson and Summerville and Tyler Adams and Max Wöber and the rest might be the future of Leeds United, but the thing about the future is that it doesn’t have to happen sooner than it’s needed. In the management’s rush to build a new Leeds United, there isn’t enough being thought about how it can be better than the old one. Or, in a second half like this, what’s best about the current one.

What I took from the second half against West Ham was that Leeds should have enough to end safely in the Premier League again this season, but it could take a step back to make sure. Aaronson is the perfect example. He’s been a delight at times this season. He’s got a lot of quality and a great future. Since coming back from Qatar, though, he has not played well, and perhaps he’s going to be one who suffers from the schedule and the pressure of having to raise his game so high so much in the last six months. In other words, the kid needs a rest. He’s got a long contract with Leeds, youth is on his side, he doesn’t need to impress anyone to get to a major international tournament for a while. It was making perfect sense, at 9.40pm on the evening of Wednesday 4th January 2023, that with a run of important, winnable games coming up, Leeds should bench Aaronson and start Mateusz Klich, at least for a while, an experienced player with form for getting Leeds to where the club has to be.

So obviously by 9.45pm Klich was in tears, Elland Road’s big screen was displaying goodbye messages from his teammates, and players were lining up in specially printed t-shirts to give him a guard of honour as he leaves for America. One solution to at least our next three months of problems leaving on a jet plane. A key to our future, a big part of our present, being made part of our past before it is time. I wish you good luck in MLS, Mateusz, but I don’t think you’ll need our wishes to be happy — you’ve the knack for making your own happiness, and sharing it with us. I should save my wishes for Brenden Aaronson, who isn’t going to get your help anymore, and for us, hoping to cope without you.

Cope might be the right word. Jesse Marsch seemed mystified by this exciting game against West Ham. “The first half for me wasn’t good enough, in terms of that we played backwards too much, we invited the opponent into the match too much,” he said afterwards. “That’s not how we want to play.” The second half, he said, was much better. “I’m very frustrated that it took our players to go down a goal, at that point in the match, to play to their potential and to play with their ability, and to play with their fearlessness and belief.” He has to come up with a way, he said, of getting the players to perform like that from the start.

The answer, to be blunt, is fucking obvious. Few words better sum up Mateusz Klich than fearlessness and belief, and not much else marked the difference between Leeds playing poorly, and Leeds playing well, than Klich coming on as a substitute. There was that, plus Harrison pinging passes straight from the RB textbook that split West Ham’s defence, and Luke Ayling charging down the right like Rasmus Kristensen has never yet. As Leeds pressed for a winner they pinned West Ham back, pushing the ball into their penalty area again and again, almost like, dare I say it, the good old days. Put Gaetano Berardi back alongside Liam Cooper in front of Illan Meslier, add Pablo Hernandez to help Harrison unlock the defence, tell Max Wöber to wait his turn while Gjanni Alioski has an encore at left-back. Cross your fingers hoping Pat Bamford and Stuart Dallas are fit to play soon.

This isn’t pure nostalgia, but a suggestion, that perhaps the players who could best adapt to how Jesse Marsch wants to play were the players who did such a good job of adapting to how Marcelo Bielsa wanted to play. It’s fine to bring new players in from the Red Bull system who understand Marsch’s tactics. But, raised in a single style, that seems to be all they understand. When he’s been allowed on the pitch, Mateusz Klich has looked as good at that style, if not better, than anyone. The lightbulb flickering above Marsch’s head while he worries why his team looked so much more like how he wants it to be in the second half is flashing on the fact that, with fewer Jesse Marsch players on the pitch, Leeds looked more like a Jesse Marsch team.

Leeds should be okay this season. The squad, and the coaches and the head coach and the boardroom, lack quality at this level, but it usually takes more than that to get relegated. Not being very good isn’t enough on its own. You need to add a sprinkling of crisis, and the team rarely looks beaten down like a side in a spiral heading for the drop. They just keep doing daft stuff that means they have to fight their way back into matches. Two for the future, Summerville embracing a sharp one-two that Wilf Gnonto hit early past Łukasz Fabiański, gave Leeds a joyful 1-0 lead and inspired an attacking spell when Leeds looked like Brazil — for about a minute. Then they let West Ham have the initiative, and because Pascal Struijk was a bit too slow getting to Jarrod Bowen, a penalty to equalise just before half-time. Whatever was said in the break Leeds interpreted in the next sixty seconds as ponderous passing at the back, leading to a deadly ball from Aaronson straight to Gianluca Scamacca, whose own early shot went straight in precisely off Meslier’s post. Aaronson staggered for a while, his hands covering his shocked face, and tried too hard a couple of times to make an equaliser happen before Marsch hooked him and let the grown-ups save the day.

Rodrigo’s equaliser was a really good goal, Adams to Harrison then a pass through the defence, a swerve into space and an arrow from Rodrigo’s boot into the net. Here’s a striker nobody rates. Here’s a striker with ten goals in fifteen starts. And although inherent dumbness gave West Ham chances to score as both sides went for the win, Leeds made chances too, and the spirit was there — it’s always there — of the kind teams can use to stay out of the bottom three.

We should worry, though, about how much of that spirit leaves with Mateusz Klich, and about the Leeds United management’s continuing refusal of all that was best about what the club had in 2021. Rather than use the stature Leeds gained from their swaggering promotion and first season up to build the club’s future, that has all been transformed, in haste, into some chintzy relic to be visited like a museum. Marcelo Bielsa’s legacy was being discussed long before he left, longer before he was ready to leave, as if Leeds were building a tomb for someone living. Players like Berardi, Hernandez and Alioski were sentimentalised while they still had much to offer. The concentration has been on paying appropriate tributes to an idealised version of the promotion players, hosting send-offs and printing t-shirts and doing guards of honour, because saying goodbye and thanks for the memories has been imagined as preferable to dealing with the messy humanity of footballers continuing to play in the here and now. They’d rather see Mateusz Klich smoking a cigar on a t-shirt, where he’s no trouble, than smoking shots past goalies from our midfield. Even then, the farewell was botched at the end of this game, when nobody knew Klich was saying goodbye.

For half an hour against West Ham Mateusz Klich was not Leeds United’s past, not a legend or a memory or a tribute t-shirt. He was one of the most important players on the pitch, helping the team secure a vital Premier League point. Half an hour later, as a consequence of the club’s management looking for a new future too soon, he was gone. ⬢