“It was deserved,” said Ralph Hasenhuttl, after Leeds United beat his Southampton 3-0. “They killed us in the second half.

I’ll stop quoting him there before everything I ever type again is autocorrected to ‘half’ by Halfenhalffl’s — sorry, Hasenhuttl’s — post-match mentions hitting umpteen before everybody stopped counting. Before the next game someone should take him aside with the ‘game of two halves’ cliche so he can practise succinct delivery and an early finish. 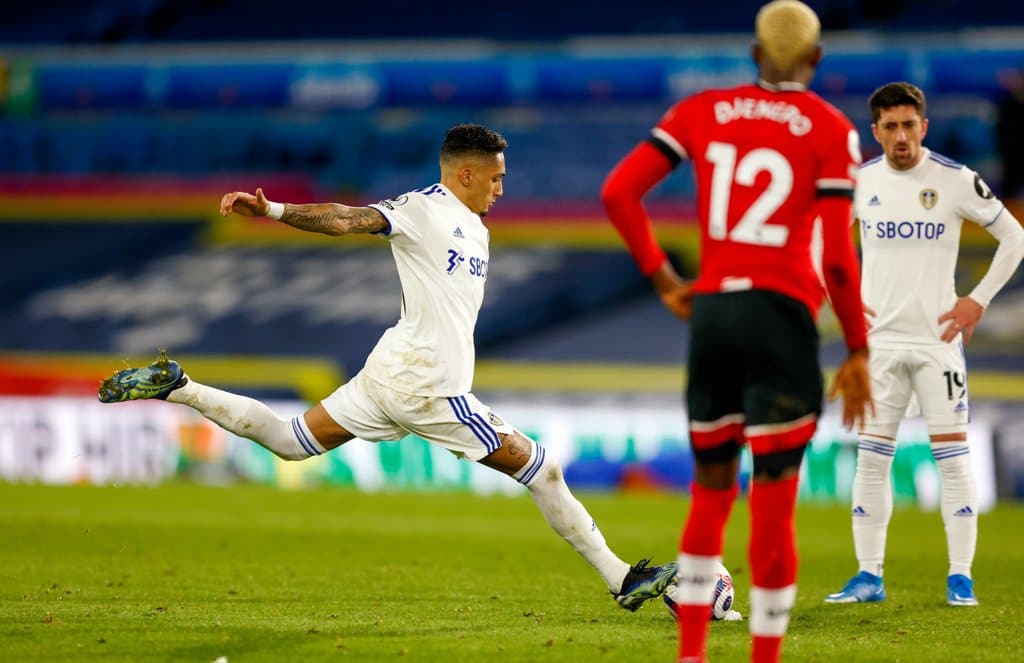 Before the match Hasenhuttl said he and Marcelo Bielsa have “a completely opposite way of thinking”, and it turned out to be true that Leeds are Southampton’s opposite: first halves are the slow halves, and the second forty-fives — some elegant variation there — are where Leeds strive to make things better.

If they still can. In the Championship it was hard to say if it was tactic or habit, but Leeds wouldn’t swash their buckles for the first fifteen minutes or so, until they’d seen enough of Stoke or whoever to identify their weak points. It always felt a little at odds with Bielsa’s insistence that a team should go out and impose its style, but there has always been a fruitful tension in Bielsa’s ideas being applied by Football League educated players. The unspoken truth about last Friday’s defeat at Wolves was that Leeds would have loved to wind the clock down that way against, say, Derby County on Wednesday 15th May 2019. But since that night there have been signs of Bielsa incorporating those cautious instincts rather than rejecting them in favour of the full vamos.

It’s more difficult to take the measure of opponents in the Premier League, though, because you can be too many goals down by half-time for your act to be worth pulling together. That was the story at Old Trafford, Spurs, the Emirates; Leeds getting to grips, as they say, in the second half, when the only doubt is because it’s Leeds, so it’s never quite over even when it’s over. It leaves you wondering what Leeds might be capable of if they always started as they finish.

Leeds didn’t start well against Southampton, but the Saints were doing their own thing very well, and their thing is designed to disrupt. A front two for them meant a back three for Leeds, including Diego Llorente’s long-awaited first full game, Luke Ayling pushed wider and higher of him; that’s where Southampton swarmed, led by Nathan Tella, hungry for mistakes. Leeds fed them plenty on a pitch with all the surefooting of a Looney Tunes cliff edge: a stumble, a hurried pass, a throw-in, an argument, repeat. Southampton love a high error that lets them straight in to shoot, as Tella did at Meslier in the first ten minutes; or to dive, apparently, as Tella did after half-an-hour, trying to trick a penalty out of Llorente. That came just after Ryan Bertrand broke into the box by handballing, a chance I only mention because Meslier’s strong-handed point-blank save was incredible.

Southampton tried unfairness again just before half-time, taking a free-kick before the whistle then not stopping when the referee whistled that they should, putting the ball in the net while Meslier stood and watched, then whinging to high heaven while every sensible person stood and watched. United’s disjointed play at the back made passengers of their forwards for most of the half, although Tyler Roberts put a chance over the top corner, and Raphinha delayed shooting a one-on-one until Oriol Romeu, with a superb tackle, took it away from him. Raphinha, gathering himself together afterwards, showed a flash of something written beneath his shirt, giving him cause to either regret that miss or put something right.

Had there been a crowd inside Elland Road, half-time would been characterised by their grumbles. It was all let out on social media instead: the tactics, the pitch, the players, the mistakes, the half-time introduction of Helder Costa and not Pablo Hernandez, everything being, as the put-upon staff in the Kop bars would have been needlessly told, “shite”.

We can’t know how half-times are a factor in the Peacocks’ second halves. Those behind the scenes documentaries only get so far. We’ve heard from former players at former clubs about Bielsa’s locker room rhetoric of street soccer and the smell of blood, and you can’t imagine that Hassenhutl’s “We have not discussed it” is ever the case. If there’s an elephant in the room, Ezgjan Alioski is teaching it to dance. At The Emirates, Pascal Struijk said the half-time talk had been about the absence of energy so far, and you could see that. Whatever goes on, it gets performances, and on good nights, results.

Anyway, within two minutes Leeds were ahead, the TV coverage emulating the experience of finishing your pint cos if they carry on like that we might as well stay down here, and missing the goal, by cutting from a replay as Pat Bamford rolled the ball in. Being shown what we’d not seen still left questions unanswered. Had that space always been there? Did Bielsa point it out at half-time? Did Southampton switch off, or were Leeds, who will always outrun the other team and always play to the final whistle, switched on? Was this what Leeds had been waiting for, for two minutes, or all night?

Llorente got the ball, and passed it up half the pitch to Roberts on the centre spot. In one moment he summed himself up: questions about the control, but how about that pass? On its way up the other half his through ball split Southampton’s defence and put Bamford behind them, ready with a precise finish into the bottom corner.

Efficiency is one of United’s bugbears, but these situations are Southampton’s, the risk of their preference for pressing. They were exposed and Leeds scored, and maybe knowing that Hassenhutl’s players aren’t good enough to keep up to his intensity meant half-time — or pre-match — was about patience and concentration, and being ready when the chance came. Just waiting wasn’t enough, though; Roberts and Raphinha in the first half, then Roberts again and Llorente, both from Raphinha’s cut-backs in the second, showed that when the chances come, you’ve got to take them like Bamford. Imagine the rumbling volume of grumbles from those silent stands if those chances were begged without Bamford already bagging.

The second didn’t come until the last quarter-hour because Leeds, with the upper hand, could give Southampton more of what they didn’t want — the ball — and wait some more. Hernandez was on by now, and he selected a counter-attack with his pass to Stuart Dallas. Dallas played the ball wide to Costa, and when he got it back it was a dangerous thing, to be flicked into the bottom corner by a sure, powerful toe. 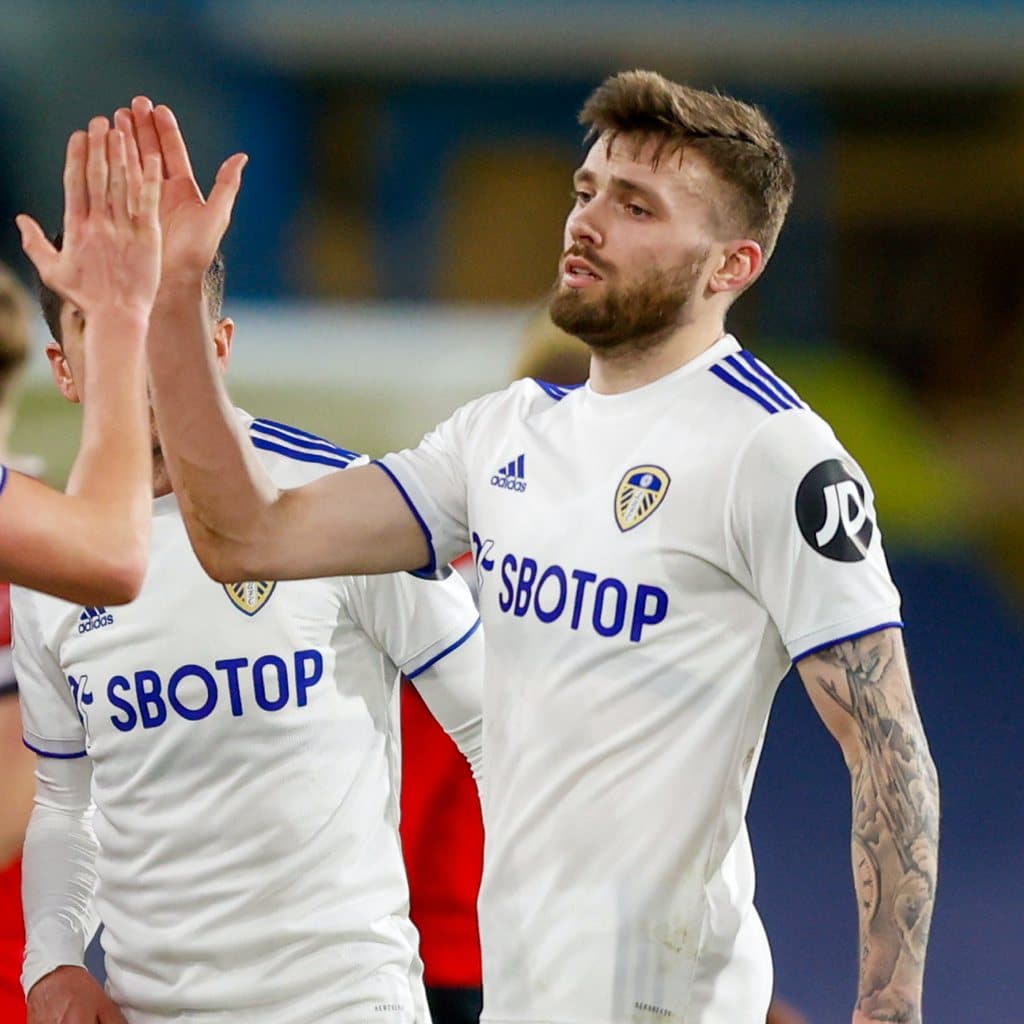 Costa almost broke through himself but was hauled down; another time he hit another of Raphinha’s cut-backs over the bar. In between Raphinha, his undershirt heavy from the first half, shot in a free-kick for the third, marking it with the message for Ronaldinho’s grieving family that might have been on his mind during that earlier chance. “I entered the field with immense sadness for the departure of Dona Miguelina,” Ronaldinho’s mother, he said later. His gesture followed Dallas’ tribute to Kalvin Phillips’ grandmother after his goal, holding up a shirt printed for Granny Val, and maybe these are also clues to the second half. Leeds had to win, they had to.

“The group here at Leeds,” said Bielsa, “is, on the human level, the best thing about this experience.” And so say all of us. Aside from the emotions, this was a night for the squad as a whole, united by their post-match photo for Kalvin and Val, and by the way they’d all played. Roberts and Costa getting assists, Hernandez and Llorente setting those chances up, the latter claiming ninety minutes and a clean sheet at last. For different reasons they’ve been on the fringes, but coming in and contributing is all you can ask.

I don’t know how much more we can ask of Stuart Dallas, again covering multiple positions through necessity, adding a goal, leading the tribute to Val. It’s not so much a question for him as for anyone who wants to come and play with him for Leeds in the Premier League next season. With apologies to Southampton, all the saints on that pitch were playing for Leeds United, none holier than Dallas, and their venerable energy and striving for good deeds took this game to its only just conclusion.

Personally, tactically, against their individual opponents, against the ball or the pitch or fate, Leeds United always have challenges. But this squad, in Bielsa’s phrase, always has resources to recover. We’re not only looking for more good players to improve this team. They’ve got to be good people. ◉