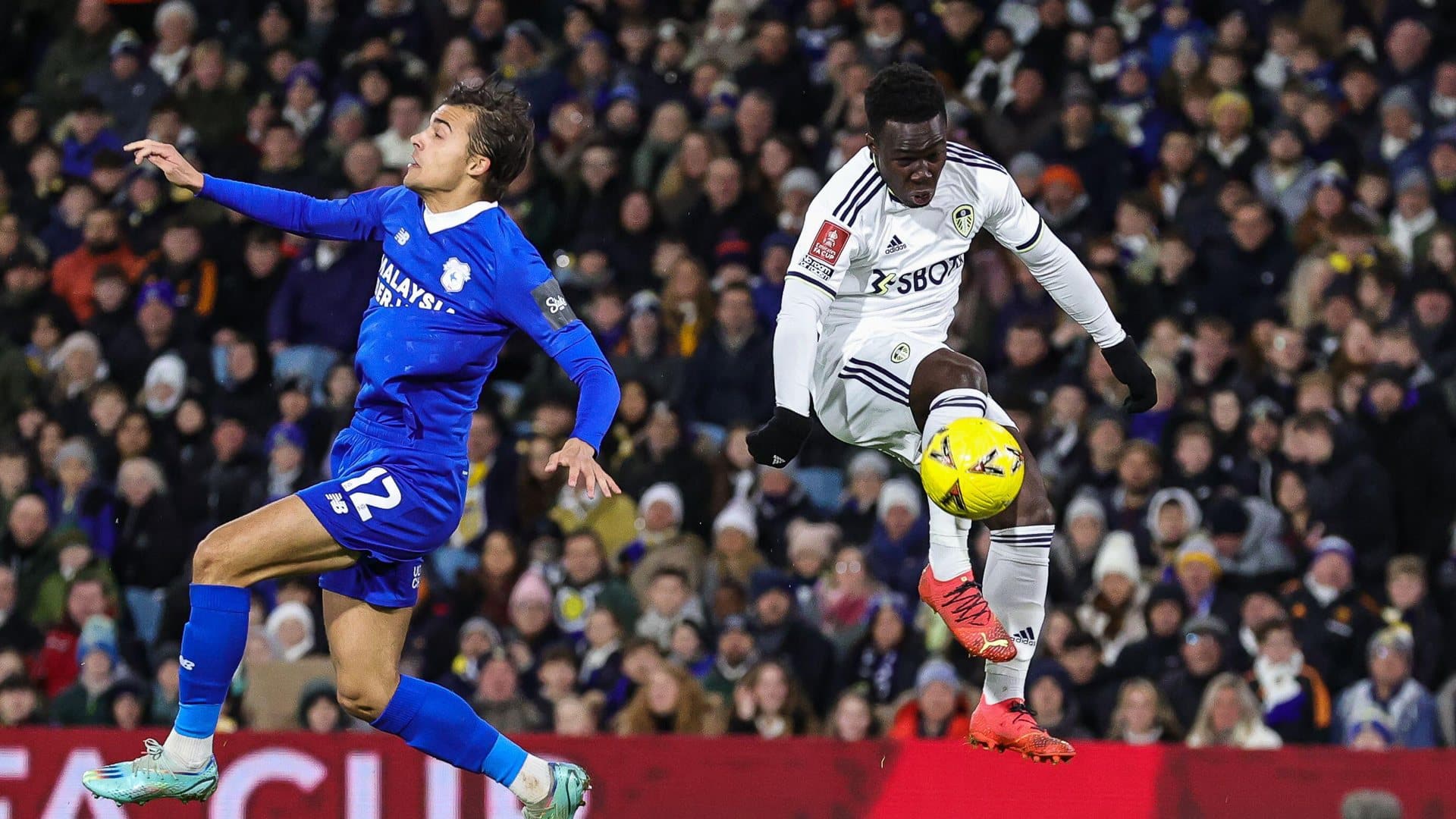 What a blessed relief this game was. Five goals scored, all good, one we can talk about forever and ever, the game so done after half an hour that everybody could relax and just watch the players doing the football and feel fine about things. It was a sweet sidestep away from that heavyweight foe, narrative, through a wardrobe door into football Narnia. Our favourite team playing well, winning, so we could all have fun. It’s been a while.

Obviously bliss couldn’t withstand the post-match press conference, when all the talk about Jesse Marsch’s future and his tactics and his personality came back, because he brought it back, raising without being asked to reports about players being against him — “B.S.,” he said — and claiming again that Leeds fans don’t understand his tactics. His presser clocks in over 2,500 words, and all that talk invited the caveats about Cardiff being poor opponents with a shambolic defence — and I’ve seen ours, so I know what one looks like — and still being able to score two past Leeds, plus one close offside call.

Even when you try to escape that stuff, you can’t. And Marsch shouldn’t look or sound so put out about the criticism he gets, because it’s not just him, or Leeds. Every English club’s season is presented in the press as a battle between its manager and time. It’s not so much sportswriting as narrating erosion, watching a house placed on a cliff as it slowly, inevitably tumbles into the sea, hot takes working like waves upon the rock face. They all get sacked in the end, and that’s all anybody talks about until they do.

So for once, instead of us all talking about Jesse, or Jesse talking about Jesse, let’s talk about me. Because I’m still feeling unusually fatigued and out of sorts since receiving a Christmas gift of Covid, and my attempts at overcoming this with fresh air and exercise have only given me a new cough. Wednesday was the day the (brilliant, please buy it) new issue of The Square Ball magazine was due for the printers, so despite not actually having a proper job I was still so busy all day with varying amounts of different stuff I didn’t have time to get properly dressed until it was time to leave for the match. For that, I did my usual trick of wrapping up too warm, leaving too late and walking too fast (three miles! and three back!) and arriving in too much of a tired, haggard, woebegone state for someone in the prime of his life. Shut up laughing. Anyway, then the game kicked off and Wilf Gnonto smashed in a superbike volley after like one second and I started feeling much better about things.

I only mention all that because I doubt I’m the only one. Everyone brings their troubles to the match, or to the sofa in front of a TV showing it, and it’s stupid really because how long do you normally have to wait for someone like Wilf Gnonto to smash in a superbike to make you feel better? Usually nothing like that happens at all and you end up deflated and cursing the cheerful chatterbox buffoon in the dugout. And you give it a few days of moaning about him, and all them on the pitch, then you give it another try, and it’s no better.

So Wilf did that and everything fell into place around him. He was serenaded by the beginnings of a new, better chant: ‘Willy! Willy!’ Sam Greenwood, with a sublime curving cross, gave him a chance for Superbike 2 but he put it over. Jackie Harrison tried one but messed it up. Better from him was a low curving pass, around Cardiff’s central defence and into space and Rodrigo. Rodrigo had already made one chance harder than it had to be and missed, and started down those lines again, tapping and stepping and turning instead of smacking the ball in. Turned out he was making a better angle to smack the ball in and he did just that. Then another goal for Gnonto, Leeds breaking from deep and counter attacking into space as if they were, well, playing against Leeds, Harrison passing to Gnonto and never getting it back, because Gnonto tricked Jackie and the defender and the goalkeeper by shooting sooner than anyone else would inside the near post.

Jesse Marsch has had diagrams of these two goals in his notebooks for years. They were absolutely what he wants. He’ll have had sketches of what Pat Bamford, on at half-time, did for the fourth and fifth, too. Pat’s first came from a long ball forward by Luke Ayling. They say one goal gives a striker confidence, and after waiting more than 400 days to get his 100th in the league, now he was van Basten, controlling the pass, moving his body, lofting the ball across the goalie into the far top corner. It was a delicate beauty. His next one could have been Haaland in Salzburg, as Leeds won the ball high, profited from a slipping defender as Bamford passed to Joe Gelhardt making space for Gelhardt to give it back, then blam, back of the net, 5-0.

It had been fun since 3-0, almost to the point where the bits between the goals could lapse into a sort of pleasant, fuzzy boring. No tension or fear, just relaxation, attention sharpening when the ball went forward in case something good was about to happen again. If it didn’t, no problem. We had three from the half-hour. Then four. Then five. Look, here’s Luis Sinisterra. I started enjoying Junior Firpo in attack. Of course he was immediately caught looking in the wrong direction when Greenwood tried to pass him through, but I felt fine about all these things. I wasn’t even cold.

Let’s deal briefly with the Leedsiness. Just before half-time a corner was watched on its way into United’s penalty area, where Cardiff put it in the goal, and even at 3-1 and even so commanding, this was enough to remember some things about Cardiff. Like the last time we played them at Elland Road, when we were 3-0 up by the 52nd minute, and drew 3-3, and that whenever Pascal Struijk thinks about that game he pukes and cries, and that despite winning seven in a row before it we only won two of nine after it. All that stuff. But the VAR ruled this goal out, for an offside player interfering with Illan Meslier. Another question about the first half is why the older players keep letting Wilf Gnonto get into trouble. He picked up a booking here for getting involved — again — in somebody else’s fight, with nobody trying to stop him, then almost talked his way into a second yellow, again without a teammate in sight. He’s getting compared to Tony Yeboah but he’s just as like Alan Smith, only Smithy used to have elder heads dragging him away. Then we have the conclusion to the second half, when Leeds kept up their average of conceding two per game by conceding two in this game, a cross bobbling between Ayling’s legs as he tried to… I mean I have no idea what he was trying to. Then a B.S. penalty against Marc Roca for handball. I quite liked this goal, though, for the way Callum Robinson went running to get the ball from the net after scoring before realising that, 5-2 down in the 93rd minute, he was looking a little daft. Lastly, better heads than mine should be weighing Leeds’ performance against Cardiff’s atrocious defending and thinking about how Brentford won’t be so generous on Sunday. Perhaps they can think about why we didn’t just stick five past these losers in the first game, too. Leeds were terrible for most of that match, but could have scored ten in this one. Is it all on Tyler Adams?

Right now, though, none of that is my problem. It was only Cardiff? Aye, and in the next round, it’s only Accrington Stanley or Boreham Wood. Going along like this, Leeds United should be getting into the 5th round of the FA Cup, and that’s a nice place to think about being. It’s a summer holiday imagined from winter, a weekend break in the warm. Mateusz Klich was there to say goodbye last night, Georginio Rutter was there to say hello, all the goals look great in the short clips, as does Wilf rattling a steward around, and his goal — you know which one — will never leave us. All players leave eventually, but some of them, not always even the best ones, leave something behind, a mark that’s a memory. It’s probably art, that, so well done Wilf. ⬢