Leeds United’s improvement in the Premier League is not going according to plan.

After promotion, £100m was spent on new players, to cause £100m of improvements to the team that won the Championship. How is that working out so far? 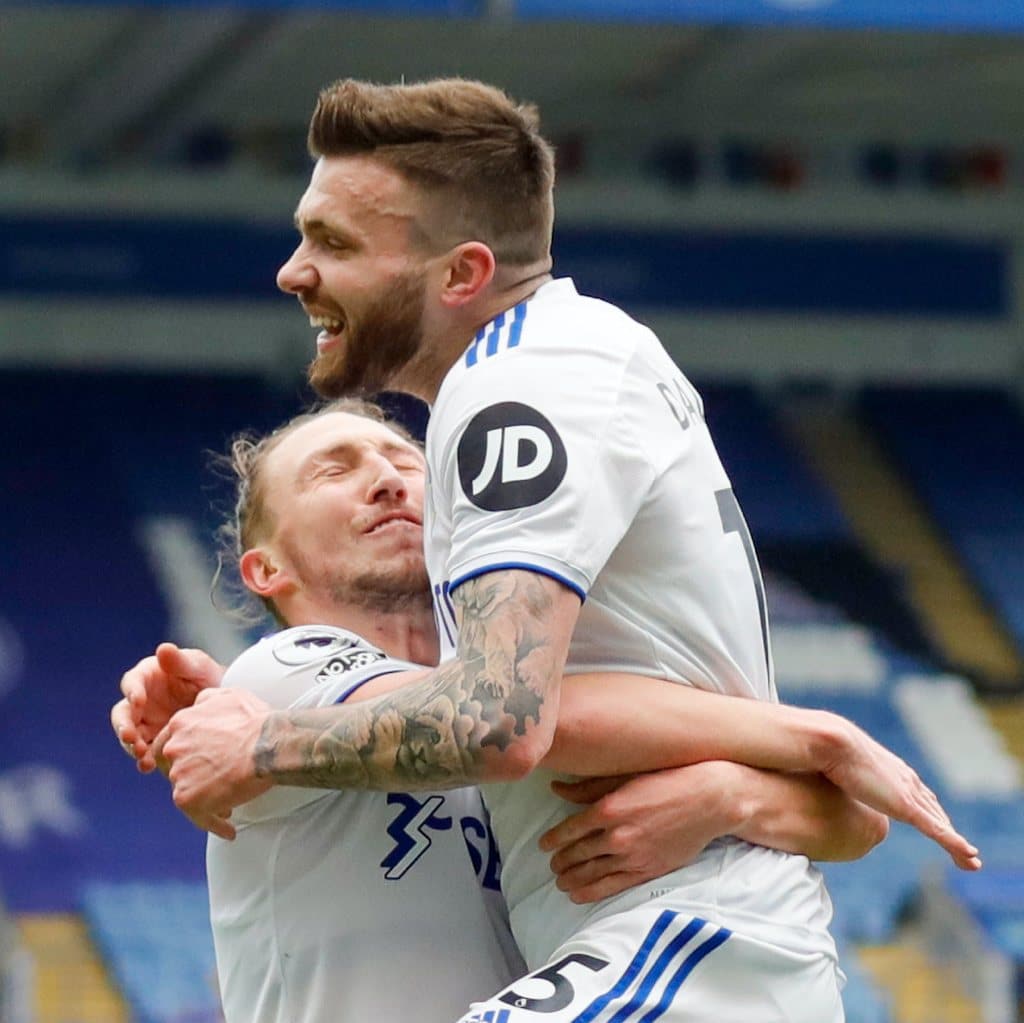 Robin Koch was hobbled in his first game, played on with his restricting knee, then was finally done for before Christmas without the chance to play his best. Diego Llorente was injured on international duty and life since has been setbacks, culminating in eight injury-free minutes before he went off at Newcastle.

Rodrigo contracted Covid-19, interrupting his attempts to assert himself in attacking midfield; against Leicester, he was substituted in the first half with a poorly groin. Raphinha — well, Raphinha has been great. But he followed Rodrigo in the second half at Leicester, hand to groin to treatment room.

That left the team that won the title — including eight who were in the squad for Marcelo Bielsa’s first league game in charge in 2018 — to thwart Leicester’s search for a late equaliser. Instead they extended their lead to 3-1 with a characteristic and decisive counter-attacking goal.

£100m spent, and for what? Leeds are 12th in the Premier League, and if they were forced to do without any of the new boys until the end of the season, it’s hard to imagine them dropping far from there.

Perhaps they might do even better. Some sort of reverse power is at work with Leeds, so that the longer a player has been associated with the club, the better suited they are to the present day. Stuart Dallas and Luke Ayling were exceptional at Filbert Way; Ezgjan Alioski was a trooper at left-back. Liam Cooper finally looked at home in the Premier League, against one of its more formidable attacking teams.

Gaetano Berardi is working back to fitness at Thorp Arch, and as the club’s longest serving player, he’s well placed to join the old-timers party, but I wonder how far back the magic could extend. Could Kasper Schmeichel be persuaded to switch sides, at least while games are behind closed doors and nobody can be mean to him? Might Billy Paynter take some of the goalscoring pressure from Pat Bamford’s shoulders? Thrown into United’s midas touch midfield, might we see the real Amdy Faye denied us back in 2010?

Time is the real point of this story, and time with Bielsa in particular. The reason United’s best Premier League players come from the same pool that beat Stoke so convincingly and suddenly in 2018 is time and training. With a coach as good as Bielsa, that can be a more valuable commodity than talent.

Leeds have a good example of the theory in their history. Eric Cantona was the best individual player on Fullerton Park from the moment he started training with Leeds in 1992, but his effect on the title race culminated in a 4-0 defeat at Manchester City. Howard Wilkinson had been working with most of his players since 1989; some, like Mel Sterland, went back with him to 1983. The newest among them had at least done a full Sergeant Wilko pre-season and six months of working since. There wasn’t time for them to adapt to Cantona or Cantona to adapt to them, however good he was. Cantona was benched for the run-in and Wilkinson stuck with the players he’d been relying on, and stopped telling them how to play. He’d already taught them everything they needed to know about how to play in his team together. Now he just had to maintain an environment around them, allowing them to get on with it.

This doesn’t mean Leeds should bench all their new players now and sell them to Old Trafford on the cheap as soon as they can. Especially not Raphinha. But we might not see the best of them until next season, with fitness restored, a season in the Premier League behind them, a year of practising Bielsa’s teaching in the bank. All four came from abroad and adaptation across borders takes time even when a worldwide pandemic is not disrupting family visits and preventing the exploration of a new country. Has Llorente seen anything of Yorkshire apart from his house, Thorp Arch, Elland Road and the A1(M) to Newcastle? No wonder he was sobbing at St James’ Park.

Bielsa tries to train players until their game is completely natural, but this is a season when nothing is like it has ever been or maybe ever will be again. So look at this way: just imagine how good Raphinha will be once he knows what he’s doing.

Until then, this is the season of the old guard, if you can call Illan Meslier and Pascal Struijk that. Meslier made his usual quota of very good saves, demonstrating how inclusive Bielsa’s definition of a team can be: his goalies can never be bystanders. Struijk, judged harshly whenever he struggles to play like Kalvin Phillips, was much more like himself in central defence, a defender worth plenty of persistence in the Premier League.

Leicester were without Jamie Vardy but opened the scoring with a goal showing what United’s defenders were up against anyway. Marc Albrighton, James Maddison and Harvey Barnes were willing runners behind Ayoze Perez, heading right for the centre of Leeds’ goal like so many Allan Saint-Maximins. The defenders marked up and followed their runners, but Barnes worked himself loose on the run, played a one-two with Maddison and fired in. Whenever a goal like this is scored against Leeds United it’s taken as evidence that Bielsa’s defending can never work, but City only breached Leeds once like that, so something must have gone right.

At the other end was a righteous equaliser created within a minute from within United’s reserves of belief and experience. Ayling intercepted a pass, ran into City’s half and gave the ball to Bamford; it didn’t matter to him if it was Mateusz Klich or Stuart Dallas running into the penalty area, but it happened to Dallas, Klich still on the bench probably making the same run mentally. Dallas met Bamford’s through ball on the run and shot first time across and through Schmeichel.

Klich soon joined in, replacing the injured Rodrigo, while Brendan Rodgers got busy with tactical substitutions, in the first half and at half-time, to get Leicester into the game. They were never exactly out of it, but apart from fifteen minutes after half-time and their late frantic state, they always looked second to Leeds. That didn’t always make sense. One of the reasons Leeds get called out for taking risks or being naive is that their game can look more like Jenga than football, one wrong move away from the whole thing crashing to the ground. Some people are really really good at Jenga, though. 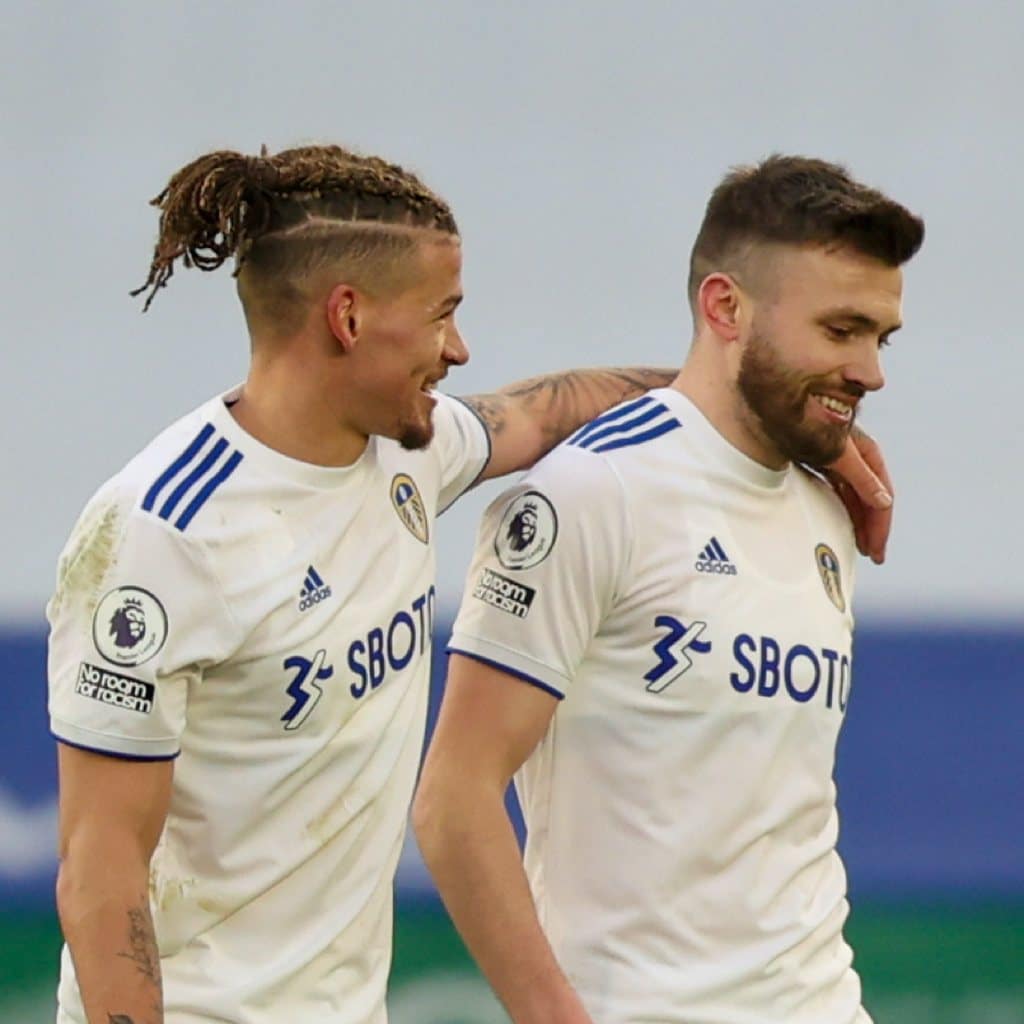 With twenty minutes left United’s second goal was perfectly timed, and Struijk’s intervention to stop Leicester’s break was an example of what he has learned from trying to emulate Phillips. Pushing upfield, he was first and fastest to Leicester’s loose pass, with the presence of mind to play the ball first time forward to Raphinha. He didn’t adjust his run or his body, only his foot, flicking the ball into Bamford’s path before City’s defence could adjust to the danger. Bamford let the ball roll across him into the penalty area and then, with all his concentration, he kicked the ball really hard into the far top corner, with a little peck of the crossbar to help the aesthetics.

What a beauty. Bamford was taken off at Newcastle in midweek and in some respects his game was worse at Leicester. He tried and completed fewer passes, and gave the ball away more often; he was the target for many more passes than at Newcastle, but harder to find with them. But he ended up with a stunning goal, two brilliant assists and the player of the match award, so go figure, and figure on the big improvement in his workrate from Newcastle — from just nine pressing actions to 25, from below his season average of fifteen to way above it — and that critical cutting edge. In the Championship, a lot of Bamford’s hard work could be lost in the glare of missing a game’s best chances. At Newcastle he wasn’t given anything to miss or make — his expected goals and assists were both zeros — but given the chance to do both those things at Leicester, he was crisp. It’s the addition of those decisive finishing touches that are elevating Bamford from trier to threat.

His second assist came with six minutes left, another very convenient time for Leeds to score and nullify Leicester. They were engrossed by trying to equalise, but Struijk took charge of Maddison’s crossed free-kick and had the presence to head it in the direction of Dallas and Klich. They backed each other down the line, Dallas drawing defenders then spinning and splitting them with a pass to Klich. He prodded the ball into Leicester’s half, predictable but completely unstoppable, and Bamford had the advantage over everybody. He ended up very close to where he’d scored his cracker, but with that one in his pocket and facing a keeper whose ego wouldn’t allow it twice, he rolled a square pass for Jackie Harrison, who resisted any urge to spin the ball up and curve it on the volley into Leicester’s empty net. A sidefoot would do.

Leicester are supposed to be good. And Koch, Llorente, Rodrigo and Raphinha are supposed to be good. And they are, all of them; Leicester could still win the league, Raphinha might still win the Ballon D’Or. But Leeds United have a lot of players who are not supposed to be this good. League One Liam. The baby in goal. A weirdo left-back, and Ayling and Dallas, who were nearer non-league than Premier League not so long ago. Mateusz Klich is the only person Thomas Christiansen ever disliked, and he was exiled in the Netherlands while Paul Heckingbottom was burying Kalvin Phillips’ potential. Harrison has a good first touch but no end product and while fans might love a trier, they want Bamford to be a goalscorer. Now there they all are, plus Struijk and Costa and Roberts and Charlie Cresswell too, sitting prettily in the middle of the Premier League, shaking winter’s blue snow from their shoes.

That £100m of talent, plus any more that joins them, will help this team get better. But for now this is the class of 2018’s world, and everyone else is just trying to fit in. There was shock, in Bielsa’s first few months at Leeds, about the way he took the squad immediately to the top of the Championship. They still haven’t found their limit. ◉