From an interview in February 2019, on his couch watching Manchester City on TV. “This Premier League is quite cool,” he says, trying to act some dialogue with his wife for the camera. “So close, and yet so far, Mateusz,” says Magda. “That’s only an hour away from here,” he replies, as they both burst out laughing.

To 2020, it’s only here, now. It’s passing wide to Helder Costa on the right wing of Anfield, letting Luke Ayling run into the penalty area, pointing to the gap behind him, getting the ball with a flick and scoring with a kick and a dream come true, a shot like a comic book, a celebration that brings him face to face with Spain’s famous centre-forward, Rodrigo.

So close, and yet so far, when Mateusz didn’t play in the Bundesliga, when his move from the Netherlands to Leeds was reversed within months, when one night ruined a season of hard work. He looked like he couldn’t believe it was happening. Mateusz, do you love it?

Nobody wanted to admit it out loud before the game but just kicking off was going to be enough. Leeds United’s return to the Premier League was about the status, not the points, about the day, not the match. About being on the fixture list, about being in the big game on Sky, about leading Match of The Day. About being in the changing rooms at Anfield, about Klopp greeting Bielsa, about our white kits on a pitch against their red kits for ninety minutes, as equals, as rivals, at last.

Then came everything. Jackie Harrison’s goal did more than any slogan or social media campaign to announce United’s return to the Premier League, because for all the commercialism of elite football we still need the game’s confirmation. With one touch killing and reviving a long pass from Kalvin Phillips that the national team would reject, he cut from the wing and shot in from the edge of the area, every touch of it setting the tone for the game and the season ahead.

Leeds, says Harrison here, are not coming to the Premier League for tap-ins and scraps. After starting with a goal like that, they can’t be. The following goals had the same hue. Leeds broke out of their patience at the back with a deft one-two around a corner they found in midfield, Klich giving the ball back to Stuart Dallas, who calibrated his high pass for trouble. Virgil Van Dijk made things worse for himself and Pat Bamford snapped the ball past Allison. Then the third: Liverpool’s throw-in, Rodrigo’s clever touch opening up the other side of the pitch for Klich and Costa, five white shirts closing in on goal, half the team prising the defence apart so Klich could go in. Each goal was a beauty.

Each goal was an equaliser, because Liverpool were clinical in the first half against the fun-size edition of Leeds United’s defence. The opening penalty was given for handball by new signing Robin Koch, VAR choosing speed over accuracy and disregarding the deflection off his thigh. Van Dijk scored a powerful header from a corner, Koch stumbling over players as he chased, so the situation was identical to most corners last season. Liam Cooper’s understudy, Pascal Struijk, headed a free-kick to Mo Salah, and he simply smacked the ball into the most top of the corners he could see.

The winner came five minutes from the end when Leeds’ other new signing, Rodrigo, got clumsy about Fabinho and Salah scored a penalty again. Marcelo Bielsa pointed out that Roberto Firmino should have scored just before that, but Ayling’s six-yard box block was typical of how Leeds snipped off those clinical finishes in a stout second half.

Liverpool completed 24 passes into Leeds’ penalty area in this game. Last season opponents needed six matches to accumulate that number. The defence had to be committed and creative even when they felt desperate. Ayling lying on the grass in front of Sadio Mané and waggling his legs in the air to stop a cross was a memorable example. Liverpool needed four set-piece goals for their points.

The rushed entry of Koch and Rodrigo, and the sight of them both forlorn after their mistakes, was one strand of a story about how United’s defending and organisation fell apart around the two least prepared players. But the debutants’ tension will fray with time if they follow Illan Meslier in goal and Pascal Struijk in defence. Those two young players should have been the nervous ones, but their complete confidence in their game looked like a testament to Bielsa’s adherence to plan A as a faith rather than a tactic.

With three world class forwards pressing his six-yard box, Meslier convinced his doubts to pass square to Ayling anyway. On the biggest stage of his career, Struijk passed to feet over eighty yards as if he was strolling at Thorp Arch. His girlfriend Abigail posted her pride on Instagram: “So happy you get to live out your dream!” Meslier helped keep it so, with an acrobatic leap saving an own goal, then a grin for his teammate asking, do you love it?

Not every dream came true. Liam Cooper had to hand the armband to Ayling for last year’s centenary match and now for United’s return to the top. He did get to lift the Championship trophy, but even then, the crowds weren’t there to complete the moment. And when Klich and Struijk dreamt about it, and Harrison about scoring at the Kop end against his boyhood club, there were fans cheering, not thousands of plastic seats like red blank bums and the sound of You’ll Never Walk Alone on tape.

And Leeds United didn’t win. But although Marcelo Bielsa said afterwards he can “Never be happy in defeat,” he teaches that style is integral to happiness in football, and he can’t be immune to the pleasure people took from what his team’s style gave to this game. “In difficult times, it gladdens the heart,” said Sky’s Martin Tyler, and that was before half-time.

Tyler was thinking of the difficult times caused by the coronavirus pandemic, but Leeds fans will mingle that thought with memories of the last sixteen years that were never like this. Forgetting the result and remembering the feeling: Saturday, when for ninety minutes Leeds United were asking, do you love it? The answer peals emotional harmony: yes, yes, yes. ◉

The Gunners were unbeaten as they came to Elland Road. The Whites proved a close match for George Graham’s side. We continue our real time journey from promotion to Champions. Our podcast is proudly brought to you with Levi Solicitors. To claim a 10% discount on your legal fees, simply head to levisolicitors.co.uk/thesquareball.

Pat Bamford, struggling for breath in his post-match interview, put the sensory emphasis on the way the game was won by the people playing it. 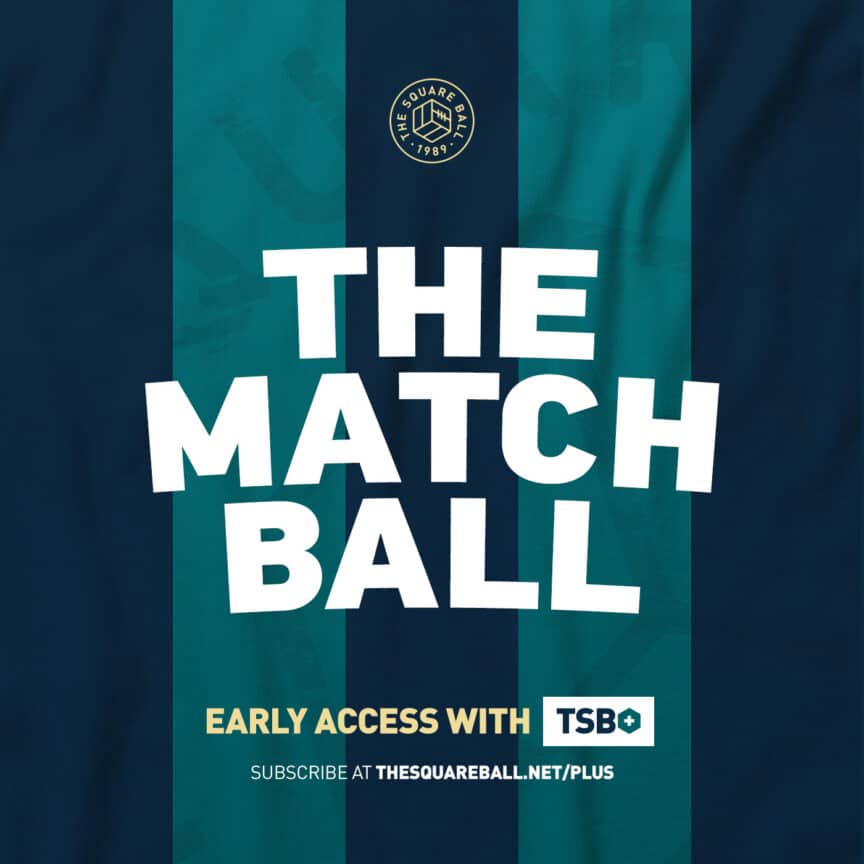 It’s two wins out of three for Bielsa’s boys as Patrick Bamford scored a late goal to pinch the points. Full time reaction. Get 10% off your legal fees at levisolicitors.co.uk/thesquareball.