Nobody should be surprised now if Marcelo Bielsa wins the Premier League with Leeds United one day.

Leeds is where it all comes true. A man is a madman until his ideas triumph, Bielsa once said, or until he moves to West Yorkshire. 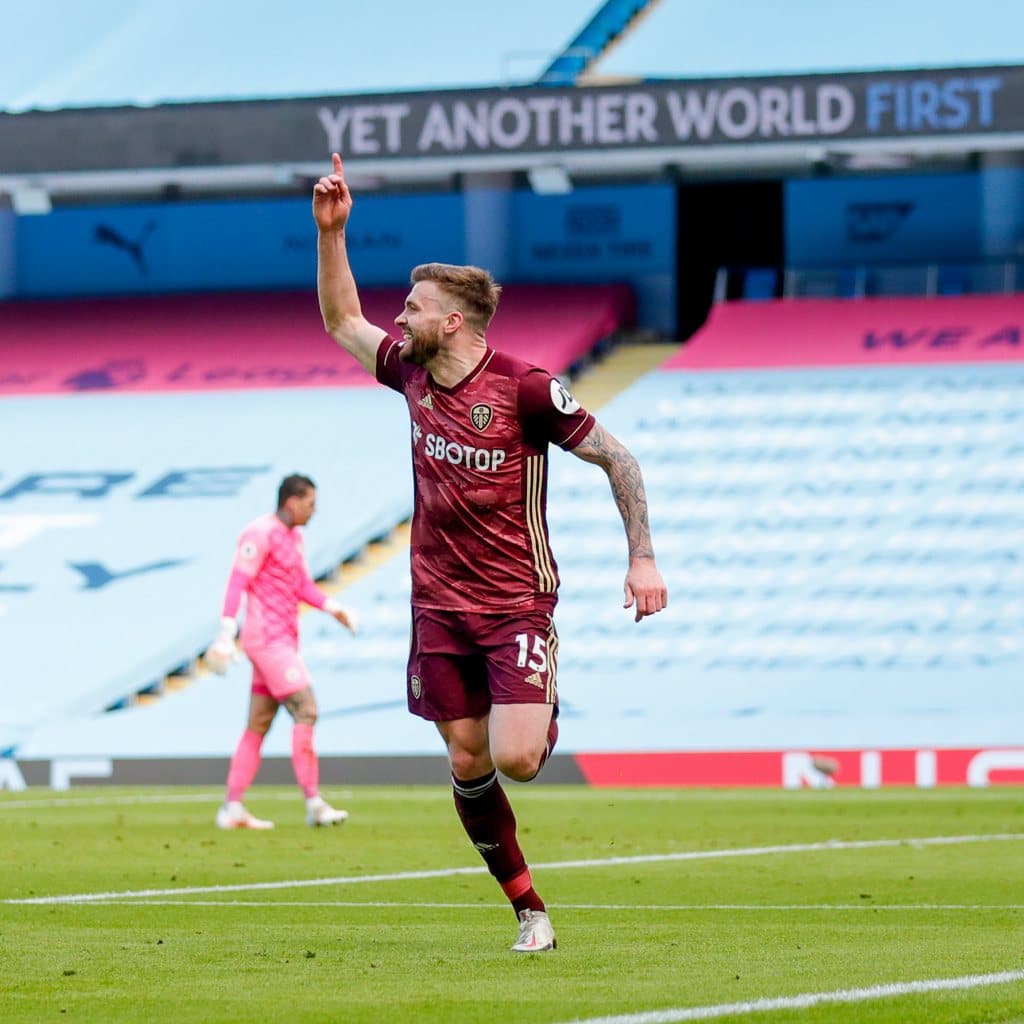 Give him Argentina and it doesn’t work. Batistuta, Ortega, Crespo, it was all no good. “The worst failure in the history of the Argentina national team,” Bielsa said.

But give him Chile, in a state of depression on the international stage, until he took them to the last sixteen of a World Cup and revived a nation. Give him Newell’s Old Boys in a Copa Libertadores semi-final, their goalkeeper scoring the winner in a 22 minute penalty shootout, long after Bielsa was sent from the dugout.

Give him Leeds. Leeds, a player down, nine back with the keeper, no centre-forwards on the pitch, against one of the best sides in history being run by the greatest coach, bar one. Give him Helder Costa and Gjanni Alioski, of all people, Costa and Alioski, and give him Stuart Dallas, the labourer made not just good but gold. Standing in front of the world’s cameras a few minutes after scoring an epochal winner, Dallas looked as if he was ready to be told off for leaving scoring so late, sorry for putting the viewers through such a stressful game. “I think that you should never give up, no matter what team you play with,” he said, as if giving advice to a junior football team. Always do your homework and stay away from drugs.

I know Bielsa will always love Newell’s the most, and one football fan to another I respect that he’ll never change. But dear me Leeds must run them close.

In Leeds we’re used to Manchester City. They’re Niall Quinn and Jamie Pollock, they’re Paul Lake and Franny Lee. So it’s hard to estimate the response to this game in the Spanish speaking world, where the media built it up with analysis comparing Bielsa and Pep Guardiola’s playing careers, coaching careers, previous meetings, playing styles, family lives; they put together collages of photos showing them each through the decades. The histories of Georgi Kinkladze or David Batty weren’t in the equation.

Bielsa says he didn’t beat Guardiola in this game but that won’t be heard. “That Guardiola is the manager of the team that Leeds beat today, I don’t consider anything on my part,” he said. “Nothing that happened today had any influence from my part.” That’s not completely true, but for once Bielsa might be right to shrug credit from his shoulders to his players’.

Any chance of using this game for its pre-kick off purpose and ascertaining the strength of one coach over another ended when referee Andre Marriner had a second look at Liam Cooper’s foul on Gabriel Jesus, a tackle few disinterested viewers would say needed reviewing. But the Manchester City players were very interested in making sure he looked twice and showed Cooper a red card.

This was near the end of the first half, when Leeds had just gone a goal ahead, looking ready to pull off a memorable if comparatively ordinary win, eleven against eleven. We’ll never know what Bielsa would have made of that outcome, but we did see his team already being forced unlike itself by the quality in City’s. It was not a case, to use Bielsa’s phrase, of Leeds imposing their style. Possession before the goal was 63 per cent City’s, all ten shots were theirs too. The Citizens had played more than 100 more passes, while the only numbers in United’s favour were things like tackles, clearances, blocks. Oh, and goals. The only one was set up by Cooper’s long ball into the left corner, Costa persisting, Pat Bamford assisting, Dallas pinging a shot, surprising, in off the post.

Without Cooper for the second half everything changed, but Bielsa’s influence was felt. First Pascal Struijk replaced Bamford, then Robin Koch replaced Tyler Roberts, Bielsa putting more value on players behind the ball instead of pressing from the front. Most coaches would leave a striker on to occupy the centre-backs and maybe nick a goal, but in Bielsa’s view any player can nick a goal, and as City’s centre-backs were playing in United’s half, defenders were better there than strikers.

Then it was up to City to find a way through to score, and with all their attacking players marked — and there were plenty — it was one of the centre-backs, John Stones, driving their attacks. He kept running through Leeds’ half like Albert Adomah being allowed to score for Aston Villa in 2019, although on this performance, if it was Stones being waved through that day he would have missed.

Leeds resisted for a long time, City’s passing numbers rising as rapidly as Leeds’ equivalents in tackles and blocks, but it’s a physical law that so much Mancunian pressure plus Ilkay Gündogan and Phil Foden from the bench equals a goal. A fractional misstep by the excellent Diego Llorente deflated Leeds’ offside trap, then a quick pass and Illan Meslier’s slip let Ferran Torres equalise from close range.

A draw might have been fair. But Leeds United’s performance was catalysed by feeling like Cooper’s red card was not fair. They played to Bielsa’s pattern, defending with numbers but still counter-attacking with as many as they could; Raphinha could have put Leeds back in front, using Kalvin Phillips pass over halfway from his own penalty area, but his first touch was too much and so was goalie Ederson’s sliding tackle. Counter intuitive counter-attacking was stored in Bielsa’s second half set up like energy in a coiled spring.

But that’s the frame, not the picture. Bielsa’s coaching has not turned Costa and Alioski into creative conquerors of the champions elect, or they’d be doing it every week. Dallas’ stoppage time brow of ice did not form in the weekly heat of murderball. Put through by the first two, Dallas, with three minutes of stoppage time left, calm, nutmegged Ederson with his shot. That wasn’t necessary. Meslier ran the length of the pitch to celebrate. That wasn’t necessary either. But of all the metrics used to measure soccer performances these days, Meslier’s speed across the turf says as much about this team as any other. Murderball isn’t necessary. But it’s better that it is done. 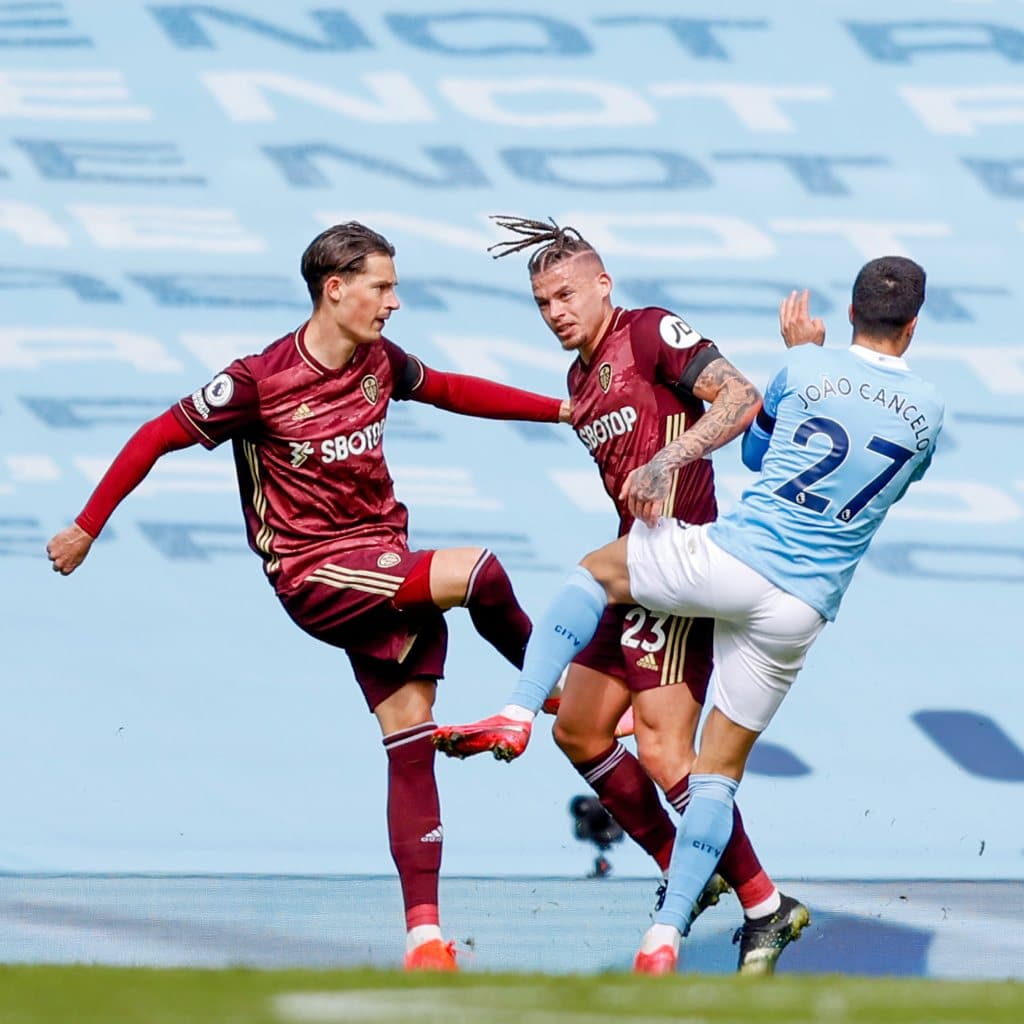 It’s not only this game, it’s everything. Bielsa gave these players the idea, showed them how to do things they didn’t think they could. But that only took them part of the way. The rest has been up to them. Bielsa showed them how to play, but it takes players who understand why they play to take their game and their club to these heights and these moments. All those hours of video sessions were, in stoppage time, in the bin, Bielsa’s ideas pushed in the back of the players’ minds. Adrenalin carried to the front their character and their determination and their feelings of injustice and their urgent desire for Leeds United to beat Manchester City, not for Marcelo Bielsa to beat Pep Guardiola, because the game and the shirts and the club is more important than the coaches or the players or the referee. That’s why Stuart Dallas almost looked ashamed in his post-match interview. He was happy for himself, but were the fans alright?

More than alright, thank you very much, Stuart, and more excited now about what Bielsa might achieve at Leeds than any time before. Winning the Championship bought Leeds a ticket to games like these, but no certainty about the outcomes, and that has turned out to be Leeds United’s strength. Unlike West Bromwich Albion, who came up with Leeds and quickly removed all doubt about their fate, Leeds have lived on the fine margins of every match this season: even the heavy defeats could have been won, even the big wins could have been lost. The difference between one and the other doesn’t look so big. But it’s a liminal space large enough to dream in.

Throughout his career Bielsa has taken players further and pushed them harder than any other coach. Speaking to DAZN last week, he chuckled over the origins of his nickname, El Loco, from back when one of his training sessions as a youth coach lasted longer than his colleagues’ three. He overmatches the game; you don’t need Bielsa’s coaching to win things, in fact, history shows quite the opposite. Working so hard to fail so hard is what makes him look like a madman. But Stuart Dallas and his teammates give Bielsa’s methods the reason that lifts them out of madness. They know how to do great things in football now, but why? Rewind your tape to the start of the 90th minute, wear it out and wear it out watching, again and again and again, the answer. ◉