Only one person for it 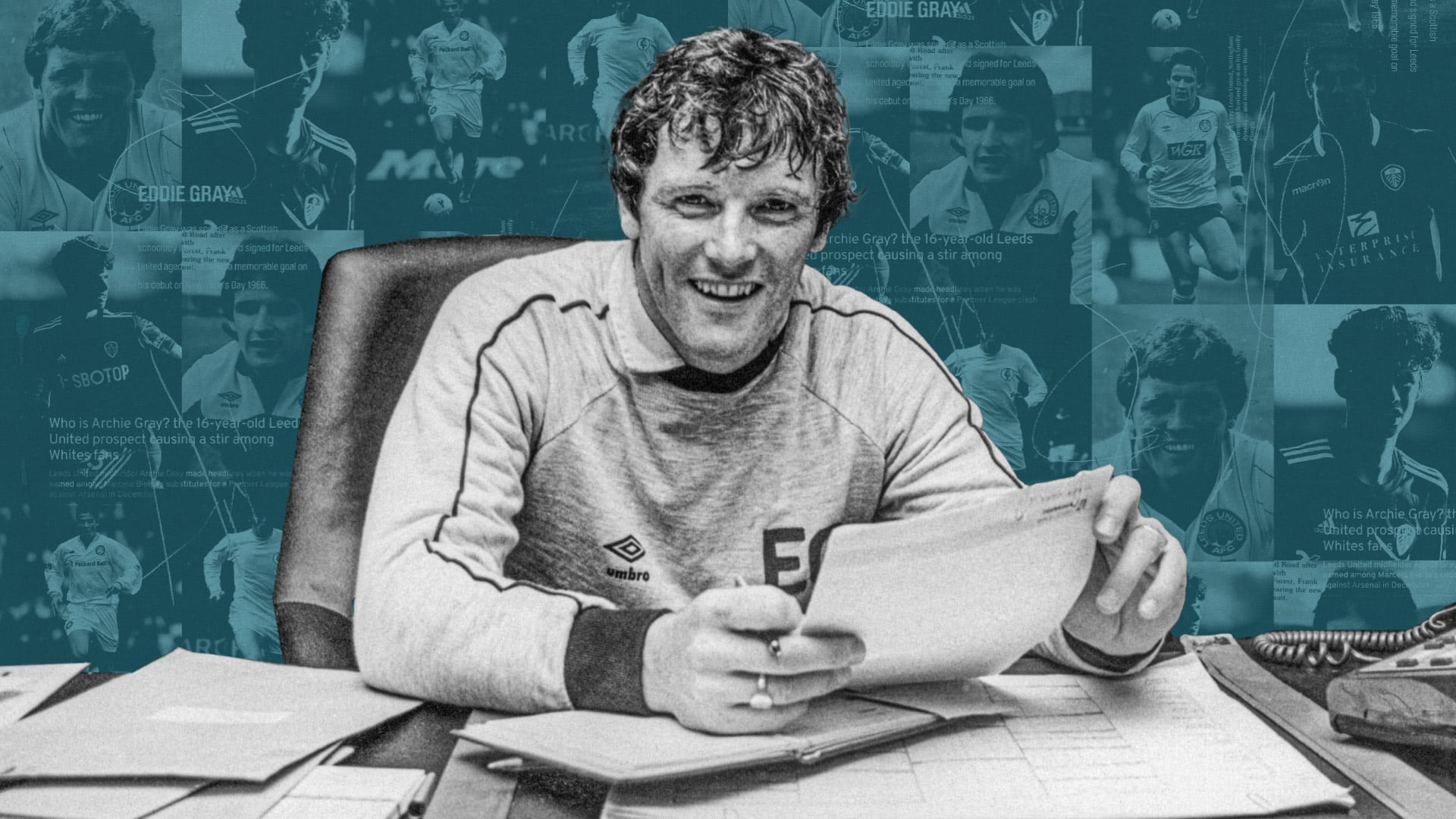 One way or another, Eddie Gray has been inextricably linked with my entire Leeds United life. Our relationship by proxy began at my first home game against Chelsea on a freezing cold afternoon in February 1983. And even though his playing career started almost twenty years before that, and the familial dynasty continues to this day, my preferred memories of ‘us’ still usually stem from his (first) time as manager.

Although by this point he was a highly distinguished former member of Don Revie’s incomparable side, it’s worth repeating that it counted for little in wider football terms. This wasn’t because football’s residual distrust of Revie, the man who had broken so many of the game’s post-war norms, had somehow evaporated — far from it. But this was an age when, following the club’s relegation from the old First Division, you had to go to a library to find out about the era’s bad luck, bribed referees, and echoes of the brutally scintillating football that side so regularly delivered.

Some of those stories would have been handed down in folklore, father-to-son, had demotion and the spectre of hooliganism not so radically affected crowds everywhere. A generation that had grown up watching Europe’s best sides being tormented in front of the Scratching Shed were now eerily absent and, as teenagers, many of us new supporters had only the present Leeds to take in. This meant that while the odd attractive derby or battle with one of the league leaders could still draw a suitably decent crowd, many games took place in a half full or less stadium, with the TV gantries that were once almost permanently occupied becoming ghostly relics.

Gray succeeded Allan Clarke (and was ultimately succeeded in turn by Billy Bremner) following a relegation stemming from an on-field malaise that began after Jimmy Armfield was sent packing in 1978. The widely received wisdom after Revie left was to hand the baton, in boot room style, to Johnny Giles, but Brian Clough’s wrecking ball approach necessitated Armfield’s calming presence instead. As he replaced the old guard their replacements were usually inferior. Gray and a few others remained, but his former comrades mostly drifted away.

By 1982 a steep decline in attendances ensured the club’s problems weren’t merely in personnel, but also financial. Gray accepted the job of player-manager – there were no directors of football then – on the chairman’s proviso that he would need to rebuild the playing staff using what he could glean from a youth set up that had already yielded the likes of Aidan Butterworth and Terry Connor. In an era long before parachute payments, the wage bill remained eye-wateringly high.

As well as transforming the squad, while it was also optional, Eddie deemed it necessary to dispense with the defensive brand of football that Clarke had employed — only three sides had scored fewer goals and two of those had finished below his in the table. This more attacking philosophy resulted in newspaper headlines lauding Leeds as ‘the entertainers’ after his first game in charge at Grimsby’s Blundell Park, but the outcome was a 1-1 draw. And with debts rumoured to be nearing £2m, useful experience and firepower in Frank Worthington, Peter Barnes, and ultimately Connor was either loaned or sold over the following eight months.

As promised the team sheet filled with the names of younger players. Mercurial cult hero to be, John Sheridan, made his debut in late 1982, while as time went on and budgets shrunk even further the likes of Denis Irwin, Scott Sellars, and Tommy Wright all joined him, followed by Terry Phelan and Peter Swan. Gray himself, meanwhile, generally resisted the temptation to let his boots do the talking, and in May 1984 announced his playing retirement, fittingly scoring the winner in his final game against Charlton.

While United were starting every season as promotion favourites, neither campaign so far had offered anything other than the vaguest sniff of a return to the top division, sapping the ego of a club that famously has a pre-ordained right to be there. Gray’s third and last full attempt did sporadically promise something different as Wright, Sellars, and Sheridan — along with no-nonsense forward Ian Baird — managed an eight-game unbeaten run and were mathematically in with a chance of going up on the season’s final day, only to lose at St Andrews on an afternoon sadly remembered for other reasons.

Rather than a grainy VHS legacy, he’s in the fabric of modern Leeds

Leeds, it seemed, were edging closer to the promised land, but by the end of August 1985 the much-fancied team was second bottom of the table. Results improved, but while Gray was still hero-worshipped on the terraces, some members of the board felt that little progress was being made. Despite a 3-0 win in the League Cup at Walsall, they opted to dispense with him and assistant Jimmy Lumsden. Rumours speculating that they were deliberately undermined in private have persisted to this day.

Bitter demonstrations outside the West Stand after the next game embodied the fans’ deep sense of anger and it was telling that Billy Bremner did little better with that group of players. Leeds were 12th when Gray departed and ultimately finished an underwhelming 14th.

It was by no means the end of the story for Eddie Gray who, had injury not plagued him, would have proven himself to be one of the best wingers of his generation. And rather than leave a grainy, VHS legacy, since then he’s written himself into the fabric of the modern Leeds United in ways his peers could hardly have imagined.

I’m still here too, but that’s hardly important. It says everything about Eddie Gray that a man given an impossible mission accepted the challenge humbly and did it to the best of his ability, successfully hurdling every obstacle but the last one. Luckily for us, there’s more where he came from.