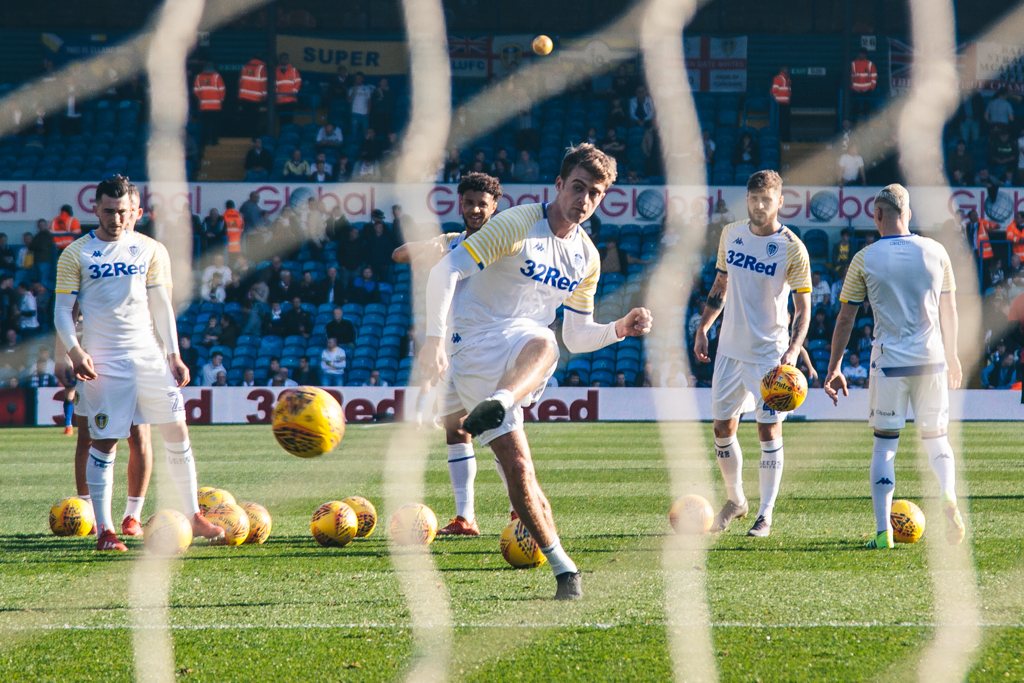 Before kick-off at Preston, Leeds United’s Twitter account tweeted a video of the team’s warm up huddle. “From the first minute!” yelled a coach from within the circle of linked arms. “Also, end any negative emotions we have. Start with the feeling of revenge!”

It was the right message after losing to Birmingham City, but shedding that hangover was easier said than done. In fact, in the opening minutes, Tyler Roberts got into Preston North End’s penalty area and tried to score by shooting from an impossible angle, exactly as he had in the opening minutes at Birmingham. Part of Marcelo Bielsa’s creed is repetition engraining excellence, but sometimes it’s easier to get by without omens and reminders.

United’s players were cautious but at times like these that training takes over. From the first minute, the system worked, training taking over from feeling and inscribing Bielsa patterns across the pitch like an animated cartoon of a spider building its web above the grass. Preston’s players were being forced out of position, into smaller spaces, and into fouls. United’s players were finding spaces on bylines and the edge of the penalty area, places they could shoot from, but where courage intervened and let them down. Leeds were dominant but Declan Rudd wasn’t severely tested in Preston’s goal. Importantly, though, nothing was going wrong.

It was a stabilising half, like dipping a toe back into the Championship to see if everything could, after all, be okay. Patrick Bamford said later he’d heard sarcastic cheering from the Leeds fans when his shots hit the net in the warm up, but even without that, he was out there trying to play the confidence back into his legs. From outside the box he tried to place a shot into Rudd’s top corner, not missing by much; more significant was that he’d started the move by sliding across Kiko Casilla’s six yard box to block a low Preston cross after a quick free-kick almost caught Leeds out. Shortly before half-time he tried another shot, from around 35 yards out on an angle, possibly aiming at Rudd’s near top corner although it was blocked before it got anywhere near that far. It was the sort of effort Bamford can only have seen Harry Kane scoring on TV, but here he was, giving it a go.

Preston’s Ben Pearson was sent off early in the second half for a professional bundling over of Bamford as he ran through on goal, but Leeds were going to win anyway. It might even have been easier if he’d stayed on the pitch. United were working steadily towards a win, but the red card added urgency; they couldn’t allow Preston time to establish a defensive blockade and had to strike soon if they were to strike at all. Some of Saturday’s imprecision returned; cut-backs behind players, overfussy passing at the edge of opportunity, shots without strength.

But then there was Patrick Bamford and his confidence. He took a throw-in to Pablo Hernandez, who beat one defender then bounced the ball off another, back towards Bamford. His first touch was heavy, and rather than giving Bamford a chance to steady himself and consider his options, it gave him the chance to watch the fucking thing rolling away from him yet again, and consider his place in the universe. Letting the ball hit his boot hadn’t worked on Saturday; it missed the goal by a fatal inch. What if his boot hit the ball instead, with everything Bamford has, had, or ever will have again?

Bamford kicked the ball really hard. Really hard. Really, really hard. Physics did the rest; adding the low speed of the ball when he kicked it, its weight as dictated by Mitre and whoever pumped it up, gravity, the net. Its line from boot to bottom corner was beautiful, like the horizon of a landscaped country estate; its effect was like a fighter jet through tranquil sky. You can’t use a supergoal to ignore reality; this was aesthetics with a purpose.

This was, arguably, as well as Leeds have played all season, given the state of the promotion campaign, the pressure added by losing to Birmingham, the doubts about Hernandez’s fitness to play and Bamford’s fitness to score. Hernandez played ninety minutes and Bamford scored twice and nobody, have you noticed, has mentioned ‘burnout’ for a while now. Preston had, as their captain Alan Browne pointed out before this game, interrupted Norwich City’s parade to the title by beating them 3-1 at Deepdale, Norwich’s only defeat amid ten wins, a notch in Preston’s own run of twelve games unbeaten. Leeds, though, were Leeds to the utmost. It’s almost pointless to describe how they played because everybody knows how Leeds play, and what’s at issue now is how they deal with the pressure and the tension, their faithfulness to their style, as Bielsa calls it, when faith is being severely tested.

Bamford scored another goal to stop any doubts about the outcome. Hernandez stroked the ball over thirty yards and past three defenders to Mateusz Klich, whose first time try to pull back was blocked, but whose second chance chip was aimed above the penalty spot. Bamford had to alter his run and reset his position, but so did all Preston’s defenders, and Bamford alone had the time to nod the ball in an arc over Rudd and into the top of the net.

Bamford had celebrated his first goal by running to the Leeds fans with his hand behind his ear, but this being Bamford, it looked more like a polite request to sing his name than a belligerent taunt. This time he left the celebrations to Luke Ayling, while he walked to shake hands with Klich and let the rest of the players come to him. It would have been interesting to see how he would have celebrated his hat-trick, and he should have, but when put through in the last minute he dawdled and Ben Davies tackled him. Kemar Roofe was ready to replace Bamford, and Tyler Roberts welcomed him to the bench with barely disguised laughter, as if asking if he just didn’t fancy scoring three. This was good. Bamford can laugh about it now, when on Saturday it was terrible. Two will do, especially when they’re this good.

Two did for Bielsa. He was already closing down, perhaps a late-season deviation from faithfulness, the team’s style having done its work. Gaetano Berardi came on to add strength, Adam Forshaw to add security, Roofe to add energy; closers, in baseball terms, getting the game won without further fuss. That, like first minute revenge, was easier said than done; Ezgjan Alioski was kicked in the face in the first minute, now Pontus Jansson headed an opponent’s head and grew a bulging bruise over his eye in the last; Preston lobbed a corner into United’s box and Casilla’s scurrying left the goal empty. But Preston didn’t put the ball into it, so all was well. As a minimum Leeds United will now qualify for the play-offs this season, and time will tell us whether that’s a good thing.

Afterwards, Marcelo Bielsa said he doesn’t know if he’ll watch Sheffield United play Birmingham City; “I’m not interested in the game, only interested in the result.” The same could apply to Leeds when they’re as efficient as this. Faithful to the style, swift to the advantages; slow to take confidence, perhaps, but they’re new to the situation. Building the attacks and, crucially, scoring the goals. It didn’t have the glamour of beating Stoke or Derby at the start of the season, but those were carefree days, and we’re not looking for performances now. Which is why it’s so important that the performances are still there. ◉