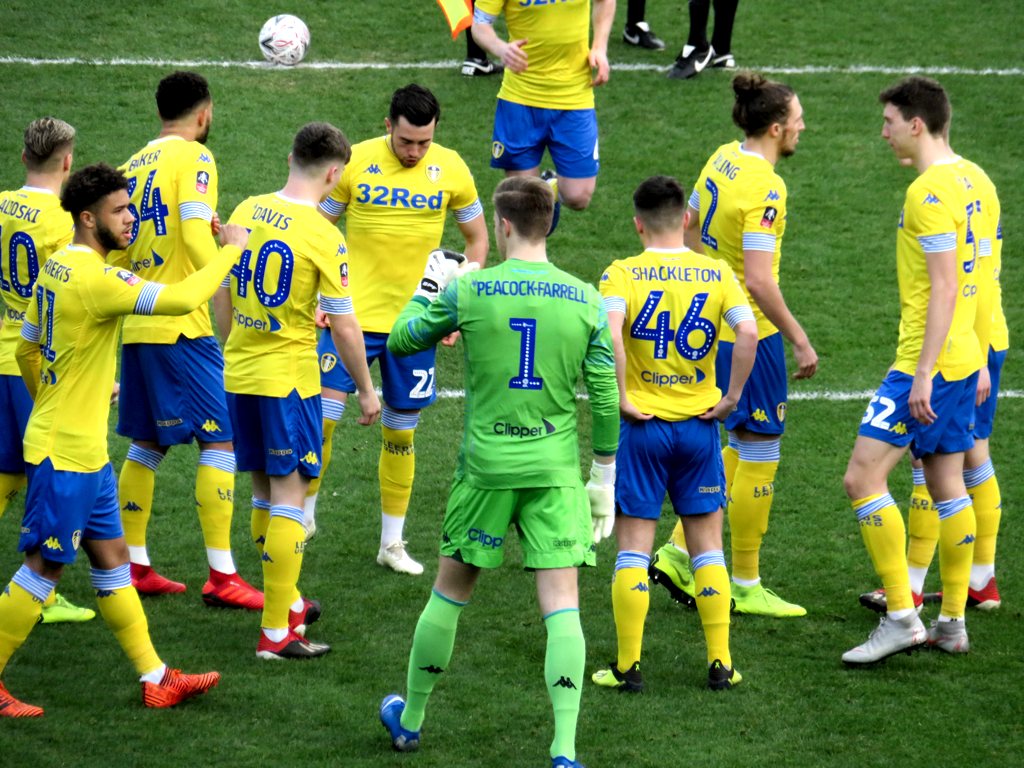 I’ve never seen a footballer as incredulous as Tyler Roberts in the first minute of Leeds United’s FA Cup tie at QPR, after his volley cracked one post, zipped across QPR’s goalmouth, and cracked the other. His eyes said his mind was blown; something had happened to him in professional football that belonged in the playground, not the FA Cup. As he looked from one teammate to another, searching for a face to share his disbelief, perhaps he realised most of his teammates still belonged in the playground, too.

Roberts himself isn’t twenty until next week, but with a few lower league loans, international caps and a multi-million pound transfer already to his name, he counted as senior in this team, along with Luke Ayling, Adam Forshaw and Ezgjan Alioski. Lewis Baker and Jack Harrison have international loan experience and Aapo Halme won a league and cup double in Finland, but beyond that Leeds were looking for Bailey Peacock-Farrell to grow up to his glove size.

Marcelo Bielsa carefully outlined the reasoning behind the inclusion of so many novices, with Jack Clarke, Jamie Shackleton, Leif Davis and a bench full of children completing the squad. He didn’t want anyone to think he was disrespecting the history of the FA Cup, but at the same time he was alert to the opportunity he’d regretted when Leeds went of the League Cup; of sharing playing time to the fringes of his squad.

That fringe was lunatic by the end, as the shirt numbers worn on the pitch increased in number while the experience decreased; Kun Temenuzhkov and Clarke Odour made their debuts as substitutes. The real weirdness of Bielsa’s theoretically rational squad size shone through in the second half when Tom Pearce was brought on to protect Halme from a second yellow card and a possible suspension; Leif Davis, all five-foot-four of him, went to centre-half, a situation Bielsa was one mistimed Halme lunge away from using in a Championship game. Then Pearce, a welcome return from injuries, was taken off again, victim of Bielsa’s desire to get some more attackers on to chase the game.

As well as being short, Davis is inexperienced at anything close to this level of football; he was plucked from Morecambe’s academy in the summer, presumably with the intention of playing in ours for a good while yet. He had a good debut at Villa Park when Barry Douglas took sick, but didn’t enjoy his second turn in the first team. As QPR burst into the penalty area after their free-kick was blocked, Davis was fooled by Jake Bidwell’s quick running over the eighteen-yard line; a dangling leg took him down, and Aramide Oteh put the penalty past Peacock-Farrell to give QPR the lead. In the second half, Bidwell freed himself from Davis’ marking at two consecutive corners, heading the second into the net.

Bidwell pissed everybody off, not just Davis; one of a core of six first team players in the QPR team, he was up against Alioski, United’s senior attacker, and found ways of blocking everything Leeds did going forward. Bielsa wanted to see how Jack Harrison played as a striker in this game, but nothing much got past Bidwell and into the penalty area, so Harrison spent a lot of time trying to draw defenders out to create space for Roberts or the wingers. Alioski was always involved while Clarke, making his longed-for first start, had a tougher time maintaining the kind of constant involvement he can produce as a substitute. Baker and Forshaw were either restricted by QPR or restricted themselves to quiet tick-tocks in midfield, rather than imposing themselves on the game.

Baker did create United’s equaliser, kind of; three minutes after going behind, his free-kick swerved and dropped just in front of Matt Ingram in QPR’s goal. He fumbled his catch and, following in like all instinctive goalscorers should, Aapo Halme knocked the ball into the net. At the other end Peacock-Farrell was busier than Ingram and produced several good saves of the kind that, too often lately, he hasn’t; they would have done him some good if he hadn’t been left blinking his displeasure at the two goals that went past him anyway. Bailey’s face was the same stern, inscrutable blank as always.

That normality was reassuring, in its way. The game didn’t produce a breakout star; Clarke didn’t storm the first half, Kun didn’t come on and score a hat-trick. But it didn’t produce a break from the usual first team pattern, either. Bielsa highlighted too many mistakes made with sideways passes; he loves verticals, getting the ball straight forward, where it might be okay to lose the ball while building an attack. But otherwise, if you ignored the shirt numbers and the lack of facial hair, United’s young reserves were a facsimile of their elders, dominating possession, recycling the ball to keep attacking, pressing high, and unable to defend corners. Bielsa was asked afterwards about analysing the overall positives or negatives from this performance, but as with trying Harrison at number nine, I suspect he’ll be taking a more granular approach as he adjusts the tracking on his video player. Each position requires certain attributes, and each player has certain attributes, so how did each shirt-full of attributes match to the job they were given, and how might they slot seamlessly into the first team when called upon between now and May?

“I think the mental state will be more linked to the future than to the past,” Bielsa said, after the game. The FA Cup is over and done with, but unlike the villains of exits past — McKay, Whitehouse, Grimes; Anita, Lasogga, Borthwick-Jackson — the players we saw this weekend are not. ◉