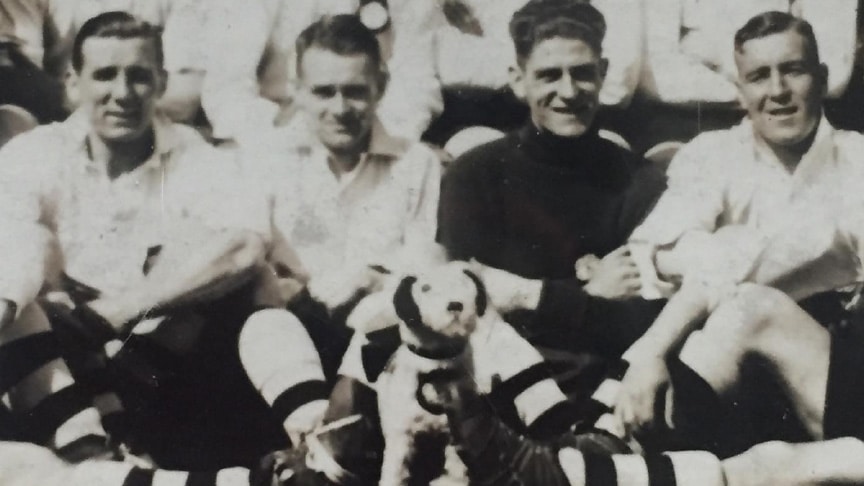 Growing up I was told my grandpa, Albert Saxton, had played for Leeds United.

The only evidence I had of his footballing talent were his trophies, his FA badge (missing a dog-chewed chunk) and two very fragile newspaper cuttings. All of which my grandma promised to me, in that cheery ‘when I die’ way grandparents do.

When I first read those clippings, it was just Grandma and me at her kitchen table, site of the greatest Yorkshire puds known to man, proudly reliving his exploits in the FA Cup for Yorkshire Amateurs.

‘The first really exciting incident was when Saxton put a glorious centre across, but Burns saved grandly under the bar … A minute later Saxton broke away on the left and his accurate low pass inside was gathered by Kelly, who scored…’

And playing for the Yorkshire League: ‘Yeardley worked into the inside right position, and passed to Saxton, who scored a great goal.’

Yeah yeah, Yorkshire Ammers. But no mention of my Leeds United.

I knew he had played against us for Leeds & District FA at Elland Road in the 1935 Silver Jubilee celebration match, as I had his commemorative silver ashtray. Yes, an ashtray!

Was that what everyone meant? Albert was a humble man who never talked about his footballing days. And Grandma was partial to hyperbole. So I wasn’t sure I totally believed it.

Then I heard he was listed in ‘Leeds United: A Complete Record’. Finally. I was excited to see his name, as a Leeds United player, in black and white.

And there he was: ‘Saxon, A.’ SAXON! Was this all a mistake?

The answer came later from ozwhitelufc.net.au, an excellent source of LUFC history. There he was, ‘Saxton: Albert’, name spelled correctly.

‘He played the one game for Leeds United in the 1939/40 Football League North East Division. He played at outside-left on 8th June 1940 in the final game of the season in a 1-3 defeat by Newcastle United at Elland Road.’

My dad added further information: the fact that Albert was offered professional terms at Everton, and I believe Aston Villa too. But his father had died so, as the sole breadwinner, Albert couldn’t pursue playing for a living (football was not as lucrative in the 1930s). I learned he also played for Hartlepool United as a wartime guest and Corinthian Casuals overseas, as well as for his battalion.

But nothing more specific about Leeds United. Maybe he was shit. We always said we should search the microfiches at the YEP but my dad passed away earlier this year and it was one of those must-do jobs that never happened. And I didn’t really think there would be anything there. But luckily I know some pretty brilliant people.

A couple of months ago, a chat with Daniel Chapman (aka @MoscowhiteTSB) evolved into my own mini ‘Who Do You Think You Are’. As he handed over a copy of his book, 100 Years of Leeds United (which *cough* if you haven’t read, why?), there were some extra pages enclosed: press clippings about footballer Albert Saxton dating from 1935–48.

After the initial dust in my eye at seeing a photo of 24-year-old Albert staring back at me from the Yorkshire Evening Post, Moscow hastily turned to THAT game: the one I’d been looking for. A piece from the day before: ‘Leeds United will have the help of A. Saxton, the Yorkshire Amateurs outside left.’

And then the match report: ‘…introduced at outside left A. Saxton of Yorkshire Amateurs. Saxton’s quickness to dash into an opening was remarkable. He has good ball control, and uses his head exceptionally well for an amateur.’

After the emotional realisation of not being able to share these with my dad, I pored over the other reports of Albert’s games for Yorkshire Ammers:

He had only flipping scored against Leeds United in the 1935 match I knew about (which I think was news to us) before losing 4-3 in a close game.

He then played against Leeds again nearly a year later. ‘Securing an early lead, was the outcome of a fine piece of play by Saxton … the Amateurs fully extended their more experienced opponents.’ But lost by the same margin. ‘The outstanding players for the Amateurs were Saxton…’

So it turns out he was bloody good. And maybe what we are currently crying out for. Or maybe I’m biased. And maybe he didn’t talk about it because he missed it. We’ll never know.

But as this is now the complete record, indulge me a second.

Albert Saxton was born on 20th March 1913 in Leeds. The only other birthday he ever remembered was mine, as I was born on the same day 63 years later. He was a gentle observer, who would quietly puff on his pipe or suck on his Pontefract Cakes/Riley’s Toffee Rolls. I can see him now, casually walking up the street with his walking stick, never in a rush. When we were little, we would climb into bed with him and my grandma and sing songs, if he could manage it without corpsing. He loved to sing. And laugh. He had a wicked sense of humour and loved physical comedy; he would often start crying with laughter in anticipation before Morecambe and Wise had even done anything.

I was 11 when he died so didn’t get to know Albert the man, just Albert my grandpa.

But now I’ve taken my imaginary Sharpie, put a thick black line through the incomplete record, and given my personal tribute to SAXTON, A (Leeds United).

For him, and all those players who won’t get a plaque or special remembrance during this centenary season. ◉