On YouTube you can watch the exact moment that Tomas Brolin’s football career ended, on November 16th, 1994. He was playing for Sweden that night, against Hungary, in a Euro ’96 qualifier in Stockholm. In other words, he was right at home.

Parma was his club but he didn’t get top billing in Serie A. Gianfranco Zola and Faustino Asprilla occupied the forward positions and his job now was to be a deep playmaker. He was brilliant at it, and his career in Italy earned him winner’s medals in the Coppa Italia, European Cup Winners’ Cup, European Super Cup and the UEFA Cup. But he had to be productive without being exuberant. His runs from midfield with the ball and vibrating with possibilities always ended with a pass to Zola or Asprilla, who would set up themselves or each other and take the headlines. 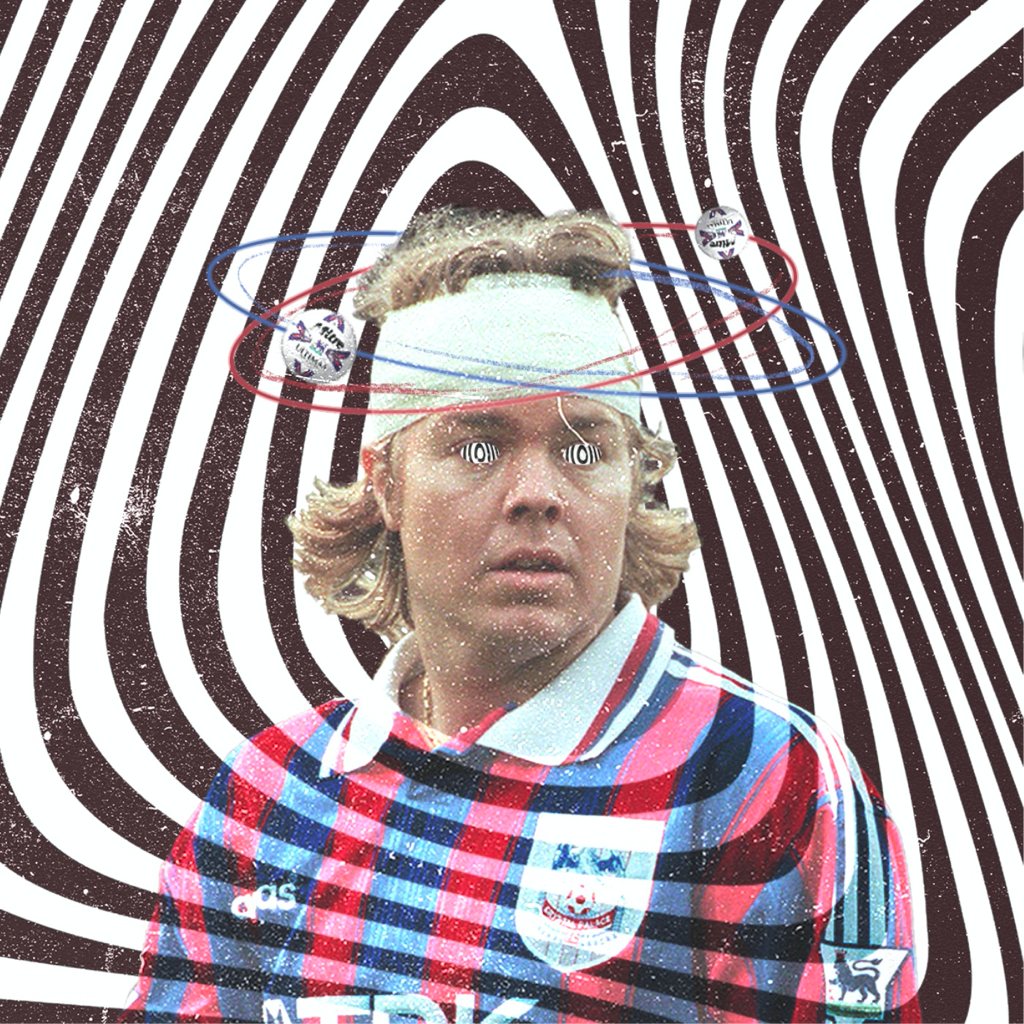 Playing for Sweden was different. The national team had good players and big names — Martin Dahlin, Anders Limpar, Kennet Andersson, Henrik Larsson — but Brolin had the free role and the limelight. In the 1990 World Cup he scored against Brazil. At Euro ’92 he was joint top scorer with three, including the iconic goal he made against England with Dahlin’s help. In the USA at the 1994 World Cup Brolin scored another three and was picked for the all-star team after Sweden finished third. He was 24, and was voted Sweden’s footballer of the year for the second time.

The team hadn’t been fancied before World Cup ’94, but Euro ’96 now looked like an opportunity. Qualifying started with a win away to Iceland before a 4-2 defeat in Switzerland, but at home to Hungary a month later, Brolin put Sweden back on track. Just before half-time, spotting a weak defensive header, he sprang into the penalty area and, with a shuffle to set himself, controlled the ball on his knee and volleyed past the keeper in one split-second movement. A spinning air-punch followed to celebrate, as it always did, and the replays showed the quick-thinking skill that warranted it.

With twenty minutes left Brolin turned creator for a second goal. He chipped the ball wide for Roland Nilsson, who followed Brolin’s forward run with a pass into the penalty area. Brolin controlled and, after a slight pause while the ball bounced, span and hit a low cross that Dahlin couldn’t miss at the back post. He’d built the goal from near the half-way line, and Dahlin, grinning, shrugged off Larsson because he wanted to congratulate Brolin.

But something was wrong. As soon as he’d crossed, still spinning, Brolin’s hand had stretched towards his foot. Now he was lying on his side on the grass. Larsson came to smack Brolin’s backside but Dahlin had looked at his face, heard his cries, looked at his ankle, and was up, waving frantically to the bench. An alert trainer was already coming but Dahlin kept waving for more. Tomas needed help.

As he’d twisted to cross his standing ankle had twisted its own way, sliding beneath his leg, as he showed the physio with a movement of his hand, before burying his face in his arms again, which didn’t do much to disguise his uncontrollable sobbing. While one trainer held the broken leg in place, another simply held Brolin as he lay crying. A stretcher was brought, and a blanket, and Brolin was taken away, and that was that, in November 1994. The end.

Of course, November 1995 took Brolin to Leeds, and the story of Brolin’s post-injury purgatory in Yorkshire is well known. Perhaps it could have been a resurrection, if Howard Wilkinson hadn’t asked him to defend, if Brolin hadn’t petulantly “decided I was going to be piss-poor” in what ended up being a 5-0 defeat to Liverpool, if George Graham hadn’t blown up a dispute with a player into a self-defeating imprisonment: Brolin was banned from Thorp Arch and Elland Road, where he had to buy a ticket if he wanted to see the game, but his passport was locked in George Graham’s office, so he couldn’t get in and he couldn’t get out. To Swedish customs officers, though, that cherubic face was all the passport they needed, but that only made Graham angrier.

Wilkinson, said Brolin later, was an idiot who lied to him about where he would play. Wilkinson, for his part, says the whole thing was his fault, as it was the only time in his career he didn’t trust his gut feeling, which was telling him not to go through with the transfer. But Brolin says Graham crossed the line into bullying. “It was lucky I just decided to smile about the whole thing from the beginning,” he said in 2012, “otherwise I would have gone under as a person.” Brolin signed in November 1995 and Graham was appointed in September 1996; it took until October 1997 for Brolin to extricate himself from Leeds.

In January 1998 he was given a short-term contract with Crystal Palace and his third game for them, when George Graham’s Leeds came to Selhurst Park, was a chance to overturn opinions and prove some points. Instead the Match of the Day cameras caught the end again, first Brolin slumped in the grass again, then a bloody bandage.

Brolin always claimed that ankle injury wasn’t the end, that when he came back inside six months he was ahead of the doctor’s schedule. But at Palace he was out of shape and against Leeds he was out of luck. An innocuous clash of heads in the first few minutes had Bruno Ribeiro, arms outstretched, protesting apologetic innocence, and Brolin wiping the blood from his face as the game went on. It took a long time for him to stagger and fall, and to get up and walk to the doctor’s room, through the tunnel in the corner of Selhurst Park. ‘Bye bye fatty,’ sang the away fans. From the restart, Gary Kelly played a simple pass to Rod Wallace, and he shot through keeper Kevin Miller’s legs to give Leeds a seventh minute lead.

Six minutes later Brolin hurried back along the touchline and out onto the pitch, clapping his hands and gritting his teeth and doing anything else he could to distract from the ludicrous picture the enormous bandage sealing his long blonde hair made of him. And Jimmy Hasselbaink immediately made it two for Leeds, too strong for two defenders, too far out for anyone but him to aim for and find the far bottom corner. As so often with Hasselbaink’s goals, you didn’t see it coming, but after it happened it looked obvious.

Brolin just looked bewildered. Wallace took the ball off him and Kelly aimed a clearance upfield, on a trajectory straight through Brolin’s head, sending the bandage flying off in one elasticated piece. The Match of the Day director soon had a camera zooming in on the stained cloth, the way cameras had zoomed in on Brolin’s tears when his ankle broke, three years earlier, when none of these embarrassments or headaches were expected as part of the Swedish superstar’s destiny. This time the Palace physio stopped the blood with a plaster but, his head pounding, a long afternoon of marking from Lucas Radebe ahead of him, Brolin just wanted to stop everything.

George Graham had no sympathy. “I think he looked better when he had the lovely headband on,” he joked after the game. “I wouldn’t know if he was fit — because I’ve never seen him fit. I didn’t see what happened when he got injured. I think one of his eyelashes got taken out.”

So much for the quips, now for the hatchet job. “There’s too much hype surrounding this player. What’s he done? He had a couple of good seasons at Parma and a good World Cup.” Even then Graham wasn’t done. “I have no problem with Brolin,” he claimed. “He had a problem with the previous manager.”

By the end of the season, Brolin said, the impetus from joining Palace had left him. “By the end it wasn’t as fun anymore. I wondered, shall I do this next season?” He was only 28, but said later, “If by the December of that year I’d wanted to play again, I would have come back. But that feeling never came and now it’s twenty years ago.” Brolin continues, impressively, to live his life without regrets, proud of what he achieved as a player before moving on. But the YouTube clip of that fateful game against Hungary is a film of the regrets fans feel in his stead. It’s one minute of Brolin at his brilliant best, and four minutes of injury and hurt. Maybe he was never the player for Wilkinson, or Graham, or Leeds. But he was some player. And then, he wasn’t. ◉