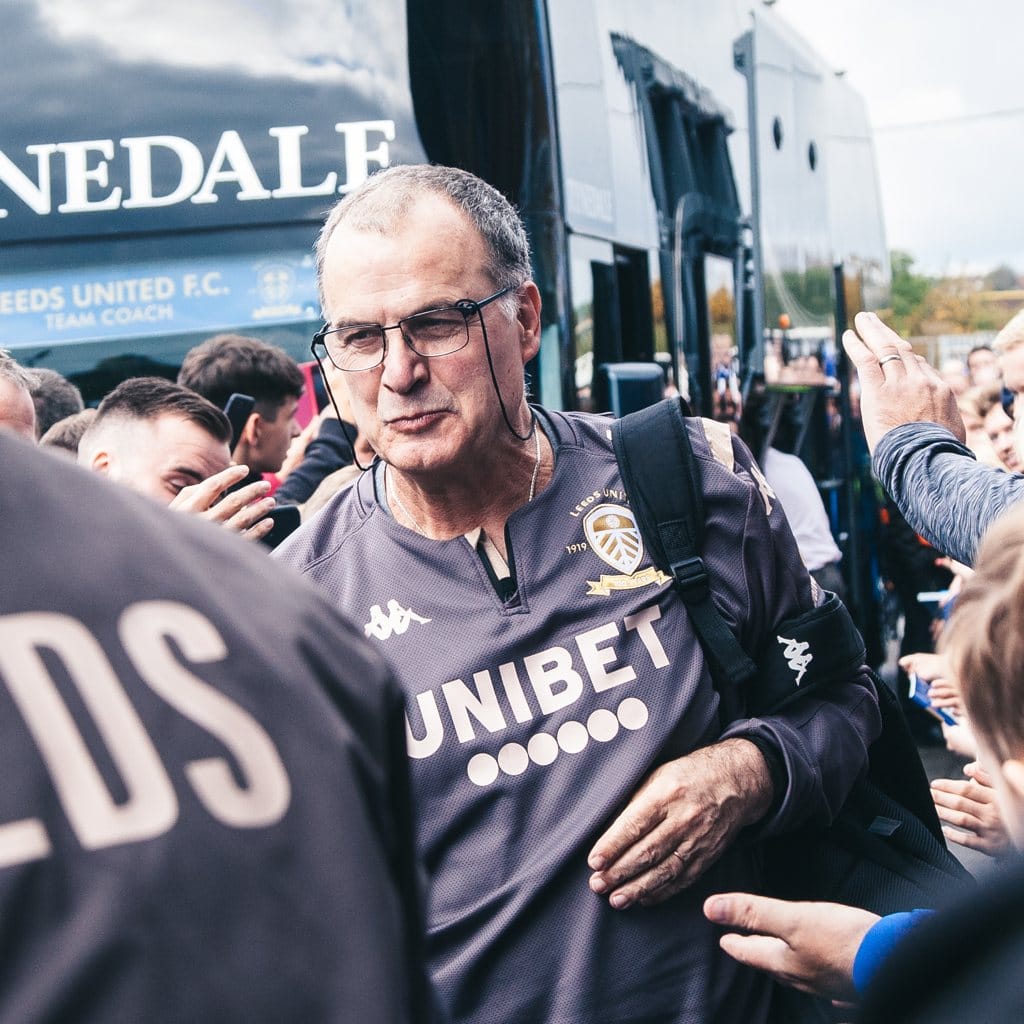 One day Marcelo Bielsa might finally work out that what Diego Flores has been asking him has not reflected exactly what the journalists assembled at his press conferences wanted to know.

Flores has not quite gone to the schoolyard level of whispering, ‘He says you’re ugly and you smell, and asks if you want a fight.’ But the effect on Bielsa of using a football coach to do a translator’s job is turning out much the same as if he had.

After Bielsa gave a long explanation this week for keeping Kiko Casilla in his team, a reporter asked a nuanced follow-up question. Flores translated the outlines and made Bielsa think the same question was being asked again, and that made Bielsa mad.

“Imagine,” blustered Bielsa, “that I have already explained this question, and taken five minutes, and we know I took 25 minutes [last week] to answer about Augustin.” To his credit, he used the opportunity to add to his earlier answer, but under the cloud he feels hangs over the way he is interpreted by the press, based on his experiences in Argentina, where he is mocked as much as he is lauded, and accused of giving long, repetitive answers to obscure bad results. Or as Flores put it, of “selling a product”, or as other translators later corrected, “selling smoke”, although there was then some discussion on Twitter about what was the most accurate phrase.

“I know perfectly that in Argentina, but in the world as well, you receive support only if you win,” concluded Bielsa. “And as almost every manager is a loser, for this reason, every manager generally is alone.” Happy Valentine’s Day, Marcelo. It must be even lonelier in a foreign country where you can’t make yourself understood.

Communication is important in football, down to the basic level of hearing, ‘Keeper’s ball!’, then ten seconds later shouting, ‘What the bloody hell have you done now, you clown?’ The verbal flow of information around the pitch is crucial to play; referees have been mic’d up before, but if any sound artists are reading who could arrange to take all eleven or 22 vocal tracks from one game and merge them into a ninety minute playback, I’d be fascinated to hear the result.

Everything around football depends on communication, too; no game can go without commentary before, in-game and after, particularly in a social media age. Twitter is a platform built on reading and writing, and the overwhelming amount of interpretation of meaning happening every minute through that website guarantees an overwhelming amount of misinterpretation of meaning amid the abandonment of nuance. Lines from an old interview with a player can circulate as if in shocking response to new events, or be made up altogether: online forums are a tangle of arguments about true texts and the meanings of things that were never said. To be a football fan in 2020 is to have a decent grasp of linguistic structures in fiction.

It’s not quite a perfect storm, but it’s accelerated by the tight grip football clubs use to fightback against misinformation, believing that if nobody says anything then they cannot be accused of saying the wrong thing. That coincides with multiplying barriers of language as football — or the transfer market, at least — becomes global, and players pass through clubs and countries, remaining mysterious.

Matuesz Klich has been at Leeds United three years, but it’s only last week, through Phil Hay, that we learned about his family’s sporting background: his father was a midfield player in Poland’s top division, then a coach; his mother is a PE teacher specialising in swimming; his sister is a trophy-winning swimmer, her partner a top volleyball player.

Last year I wrote as best I could about an incident in Prilep, Ezgjan Alioski’s hometown, when he and his family were asked to leave a restaurant because, Alioski believed, they are ethnic Albanians, and not welcome there. Searching for info on Twitter, internet translation revealed the sectarianism Alioski faces after a bad game for North Macedonia: one tweet, supporting Alioski, made the extremely dark observation that the restaurant owner only threw the family out because he didn’t have a gas chamber to throw them into. It’s a situation that barely registers in Leeds: ‘How was international duty, Gjanni?’ ‘Yeah, fine.’

There are gaps even closer to home. Stuart Dallas was put up before the press a few weeks ago, but once his lack of enthusiasm for talking again about being a utility player was apparent, the questions dried up and the press conference ended after a few minutes without much to show for it.

We don’t necessarily lose anything by this. It’s not always clear what we want to know from footballers, or what we expect to find out, but as fans we want to feel some sort of closeness to the players on our team. There might not have been much gained in the days when John Pemberton, leaning through his car window, would hold out his favourite CDs for inspection by the official Leeds United magazine, apart from the frisson of glamour: an in-car CD player! But we felt like we were learning something.

Football is, at heart, a simple game, in which 22 Lionel Ritchie fans compete to put a ball in a net. But all the discussion and language around the game has, for decades before social media, raised it to the artistic level of ballet: a team is eleven bodies moving in coordination, instructed by a choreographer, as the symphony of the crowd rises and falls around them. That’s how it’s interpreted: why did the choreographer place this dancer here, not there? What was meaning behind this movement, or that one? How did the company of dancers respond to the orchestra and choir? What does all this have to say about the modern condition? They’re kicking a ball about, but we analyse them like tightly rehearsed artists exerting cultural influence, because that’s what they are.

At least, we try to. Marcelo Bielsa must have a higher words-per-game ratio than any manager in Leeds United’s history, but we might have to face up to the fact that he’ll arrive, stay and leave with his genius unknowable. The cottage industry springing up around re-translating the translations of his press conferences can only offer an illusion of help, while risking schisms depending which version of the gospels we believe. Before we can discuss whether Bielsa is right or wrong, we have to agree what he means, based on what he said; and if we’re using competing translations, agreement is hopeless. Then we have to consider what Bielsa might have said, if the questions had been translated to him differently.

This ought not to be insurmountable in 2020. Yosuke Ideguchi maintained what looked from outside like an agonising silence in Leeds during his interlude here from Japan, but it was possible to use the internet to find and translate his rare interviews given to the online version of Japanese Playboy. They weren’t as exciting as that sounds, mind.

Perhaps something like that is the solution for our crossed linguistic wires with Marcelo Bielsa: let Diego Flores have a much-needed rest from his unwanted second job, replace him with a smartphone, and let artificial intelligence translate back and forth. If it works for tourism, it can work for football. I look forward to Bielsa’s response when a question about Kiko Casilla in the team is translated to him as, ‘Can you give me directions to the clown house, please?’ ◉