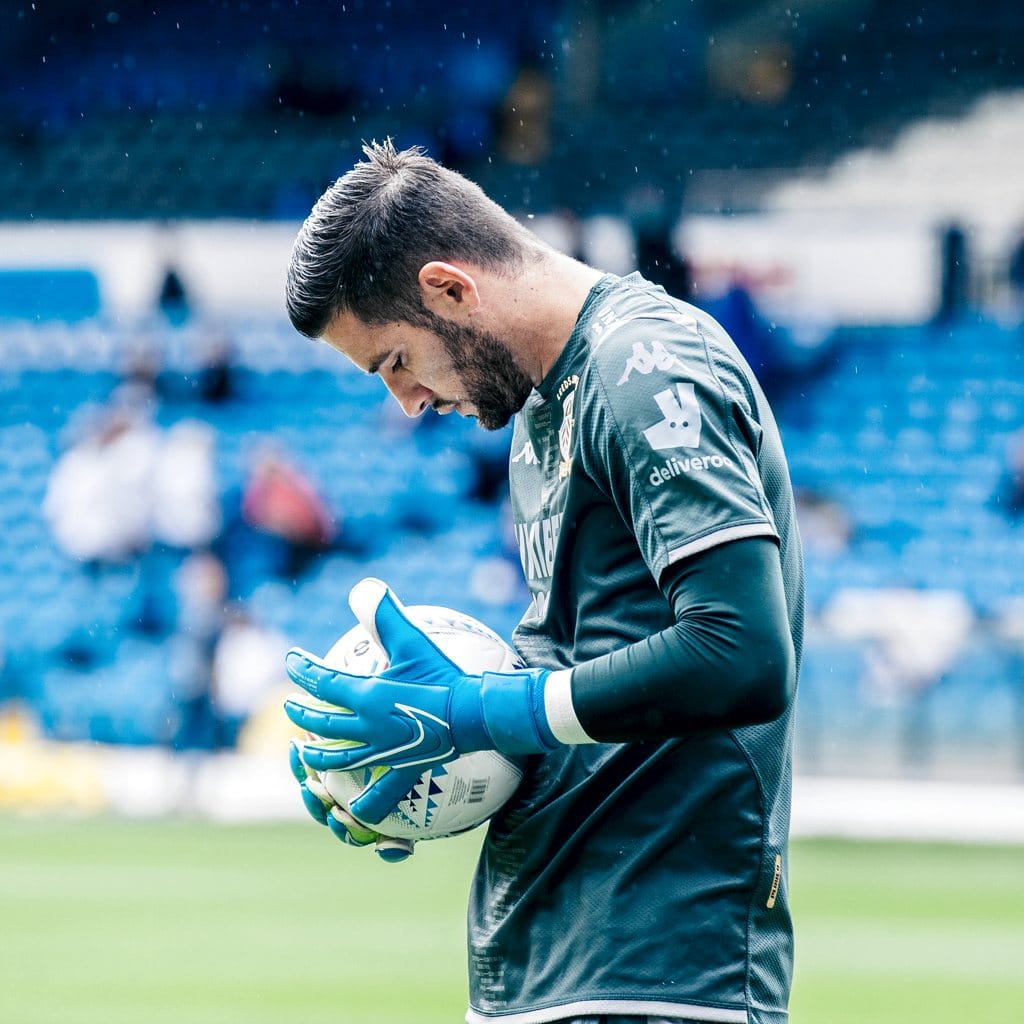 The relative serenity of the goalkeeper is one of football’s curiosities, and one of its conditions for success. They’re a necessary contrast to the game around them in almost every way: while others run, they walk; where ten have the freedom of the pitch, they’re caged; the game is called football, but they use their hands.

An almost eerie confidence surrounds even the worst goalkeeper: it has to, or they’d go to pieces. Think about the language that involves them. The opponent shoots at the keeper, all the time, like in a war. We expect them not only to come through the bombardment unscathed but to catch the bullets and throw them back. Their job is to save, like Jesus, and you can do your own joke about crosses here. But a warrior complex and a messiah complex combined? It’s no wonder goalkeepers are complicated people.

They’re the perfect example for Marcelo Bielsa’s famous confidence that, with a team of robots, he would always win: they’re the nearest thing football has to androids. No matter what happens, a goalkeeper is programmed to reset and continue: if they’re shot at, they stand up again; if they don’t save us now, they save us later; if they make a mistake, they erase it from their memory. It’s hard to think of Felix Wiedwald as an impenetrable, undefeatable saviour of humankind, but if he hadn’t been taken out of the firing line he’d still be there now, like one of those bizarre paintings of a redneck Jesus under enemy machine gun fire.

Once Wiedwald was out of the Leeds team he did the best thing he could, finally revealing how the human in him was feeling: he went right away from the team, spending his Saturday afternoons exploring the Yorkshire countryside with his wife and his dog. Maybe that’s where he’d wanted to be all along, but his training wouldn’t let him show it.

Gary Sprake used to infuriate his Leeds teammates for the way blame would wash off his shoulders within minutes. John Lukic would go into a trance before matches and not emerge until they were over, when what was done was done. After a mistake, Nigel Martyn would pop to his feet, collect the ball and reorganise his defence, wearing the face of someone pretending to act, or acting to pretend, natural. Nobody wants to see an emotional goalkeeper, although when Bailey Peacock-Farrell’s impressions of Grace Jones at her most statuesque spread from his face to his arms and legs he was taking it a little far. But that’s part of the job. Sometimes we think goalkeepers don’t care, but if they look like they do, they don’t look like a goalkeeper anymore.

And so to Kiko Casilla, around whom questions are swirling like corner kicks he’ll never catch. What is he thinking? Why doesn’t he save anything? And shouldn’t we try somebody else?

In the Yorkshire Evening Post on Thursday, Graham Smyth spoke to Oxford United’s sports performance psychotherapist Gary Bloom, a Leeds fan, who believes that without someone doing his job Leeds are doomed to repeat last season’s descent into the play-offs. On the other hand, you have the assessments of Marcelo Bielsa and his players, who when asked have said that together they have enough — although Jack Harrison did seek his own sports psychologist during his summer of self-improvement. Still, Mateusz Klich says the players are calm: “Everything is positive, no-one is angry, no-one is screaming”; and Tyler Roberts insists, “All of the boys know we’re the best team in the Championship, we deserve to go up.” Observers might say they’re kidding themselves, replacing last year’s invocation of ‘Bielsa Burnout’ with predictions of mental collapse, but looking to Kiko Casilla for evidence will be a waste of time, even if he is the cause of anxiety in others. He’ll stand amid it all, serene, his thoughts his own. So much for what he’s thinking: he’s a goalkeeper.

But will he save anything? The statistics about his shot-stopping are stark: he doesn’t. But the statistics about the Peacocks’ defending are confusing: on a good day, they don’t give him anything to save. Metaphors about taking potshots and firing at a keeper haven’t been updated to reflect tactics of modern war, like drone strikes, targeted by a pilot-operator hundreds of miles away from the enemy. But Casilla has stepped from ultra-modern Real Madrid into a very old fashioned football club, like a DDoS internet attack into a First World War trench. And nobody here can make him out.

As with many of Bielsa’s ideas, Casilla might look better in the Premier League, where nobody really expects a mere goalkeeper to stop Mo Salah. The language of goalkeeping is changing at the top level, where ‘unsaveable’ has become a regular usage, reducing blame for anything but the most outrageous mistakes. The line between feet and hands has become blurred, so that distribution is more important than handling to a goalkeeper, the way passing is more valuable than tackling for a centre-back, because the rules about contact and offside replays are being tilted so far in favour of attackers that defensive players are almost supposed to stand and watch while the spectacular happens. Or while the really stupid happens, like when Wigan scored against Leeds.

That might be modern football, but as Leeds United fans demonstrate whenever something with a vague whiff of the 21st century happens in LS11 — a grey and pink kit, a stupid looking badge, a ball-playing goalkeeper — our self-perception as a Premier League club remains firmly rooted before 2004. We’d like the West Stand to be redeveloped, but can’t stomach the cheese bar that would bring; and we’d like Casilla to make a string of confidence-boosting saves, even though that would mean our modern defensive play was failing its Premier League 2020 test by letting people shoot at him. We don’t know that he’d save anything anyway, based on what we’ve seen so far, because we’re not really sure we trust the game that he’s playing.

Casilla is the one legitimately modern Champions League-trained player at Leeds United, and many regard him as one of the team’s worst. Trying to argue that one to a conclusion would be like trying to argue with your parents about music: we know a good goalkeeper when we see one, or we did, back when nobody cared about their passing accuracy, and the charts were full of proper songs and you could hear the words, but you just don’t get it Dad, times have changed, it’s not even supposed to be a song about a real horse, he’s a genius.

I doubt Casilla can work us out either, but that mutual inscrutability doesn’t get us any closer to knowing what to do with him for the best. In some ways we are absolutely dependent on the characteristics of the player with the gloves — we can’t say between the sticks anymore, when he’s standing in the centre circle — but in other ways, we could get promoted this season without whoever is in net making a single save more. If Bamford and Augustin finish all their chances, and Cooper, Phillips and White keep the opponent out of United’s box, Adam Forshaw could make a glorious return as a playmaking rush goalie. Or, if he’s not fit, Illan Meslier.

We saw Meslier’s giddy side in the footage of the Leeds bench celebrating each goal against Millwall, when he was the lead cheerleader, leaping into the technical area with a spring that suggests he would have tipped Wigan’s deflected corner over the bar. But he’s nonetheless a goalkeeper, and we’ve seen him playing there, in character, as stern and expressionless as Casilla. On the surface he has everything Casilla has, and we’re running out of reasons why we shouldn’t give him the opportunity to go through ninety minutes untested in the modern style, to play whole games without giving anything away about his ability or his character. Until, I suppose, one Saturday afternoon, when he’s exploring Brimham Rocks with his dog, and we’re trying to work out what stuff Elia Caprile is made of.

If modern goalkeeping is a matter of passing the ball accurately until you concede a goal to either an unstoppable shot or through either your own or someone else’s error and then looking like you don’t care, there seems to be nothing to lose by swapping Casilla for Meslier. Equally, we don’t know what we might gain. Perhaps nothing. Perhaps just another enigma for the collection. ◉