It’s a bleak, cold day even by January’s standards. The new year is seven days old and today I start my new job. Three months have passed since I last saw Leeds city centre.

The Christmas lights are still up; detritus from a party that never started. On Briggate a cheery neon script spans the street, proclaiming Leeds as the city of ‘big smiles and bigger hearts’. Today the smiles are hidden behind masks and people shuffle furtively past without meeting your eye. It’s so quiet.

At City Varieties, beneath a dusting of frost, a poster advertises a pantomime whose run ended a year ago; a time that seems infinitely more distant than that. Signs have been removed and shop windows whitewashed. Parts of the city feel as though they are sleeping, or have drifted altogether outside of time. 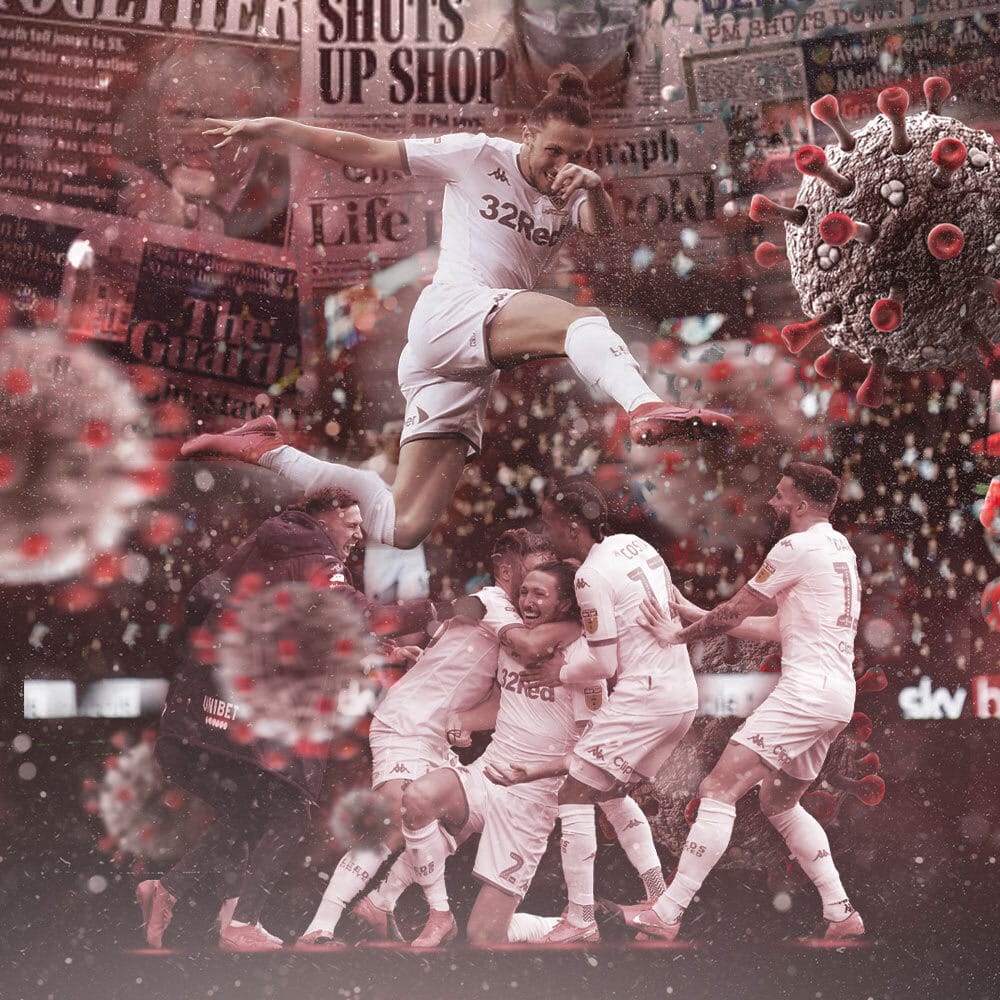 Lords of the false dawn, Leeds defied everything

On Merrion Street, by the shuttered Picture House pub, another poster stands out amid the desolation. It’s a picture you will have seen many times before, of a throng of white-clad youngsters clustering around an old Argentinian man. His shy smile belies his delight, but the vigour with which he grips the trophy in his hands tells its own story. I look at it, and for a minute the world around me feels a little warmer and less dystopian. Suddenly I’m smiling, too.

We used to joke about the impossibility of Leeds United ever reaching the Premier League — meteor strikes and other global extinction events occurring in the closing minutes of the deciding game, that kind of thing. 2020 was the year that it all got a bit too real. Here we were, on the crest of a wave, with five wins in five and ten games to go, when the very fabric of society began falling apart. The world ground to a crunching halt as the pandemic spread, and Leeds United’s charge halted with it. Eight months of drama, left unresolved. An epic film with the last reel missing.

I don’t know about you, but for me that was the moment when the threat from the coronavirus passed from abstract to real and it became apparent that life was soon going to look very, very different. Suddenly we were living through history, and not the good kind. You can’t fully appreciate the structure sport brings to your life until it is stripped away without warning.

Football is escapism, a ninety minute refuge from all of life’s pressures. Its absence forced us to confront unpleasant realities, which seemed to worsen by the day. With Saturdays now devoid of meaning, days of the week merged into one amorphous mass. There seemed to be no visible end; an interminable close-season without even a transfer window to alleviate the boredom. We stopped refreshing Phil Hay’s Twitter and began refreshing infection charts, the death totals mounting up relentlessly, numbing us to the human cost behind them.

There were times in 2020 when football never seemed less important. But, as someone wiser than me once said, it remains the most important of the unimportant things in life. After untold aeons and two million episodes of Tiger King, the wheels creaked into motion and the debate about how to end the season began. And, for me at least, something changed. Suddenly I had something to care about.

Leeds, for their part, maintained a dignified silence that contrasted nicely with the machinations of the bottom six and allowed us all to enjoy the cosy glow that comes with the moral high ground. It was another welcome distraction from events in the world at large. Who cares about coronavirus when those shameless bastards at Norwich are arguing they deserve Premier League football more than we do? Our club deserves credit for playing a smart PR game and not rising to the bait, but the real praise goes to Marcelo Bielsa and the players for putting us in pole position before the shutdown. As bad as the first lockdown was, how much more nightmarish to be locked down in Hull, like John Coffey on the Green Mile, awaiting the resumption of a season that could only end in your team’s demise?

All of this would have counted for very little had Leeds been unable to finish the job. But the moment Liam Cooper lifted the Championship trophy will forever be a beacon amid the gloom of 2020. Many will remember it as the worst year of their lives. We will remember it for something else.

These times have been dark and scary and confusing. We’ve battled with fronted adverbials and reassured our children that their friends won’t forget them. We’ve told our loved ones we were okay, even though some days we really weren’t, and felt like we might never be okay again.

But Leeds United, the lords of the false dawn, finally defied everything we thought we knew about them and gave us Premier League football. They deserve our eternal gratitude for doing so. I only wish we could be present to show it.

It’s been a year and we’re waiting for a new start for the world. The day we return to Elland Road is on the horizon. The day to say thank you is coming. ◉

Elland Road was full for the final home game of the season, as Bassett’s Blades came to town, with danger man Brian Deane leading the line. The Whites took the points thanks to a terrible defensive error as the capacity crowd saluted a fine season on the team’s lap of honour. With levisolicitors.co.uk/thesquareball.