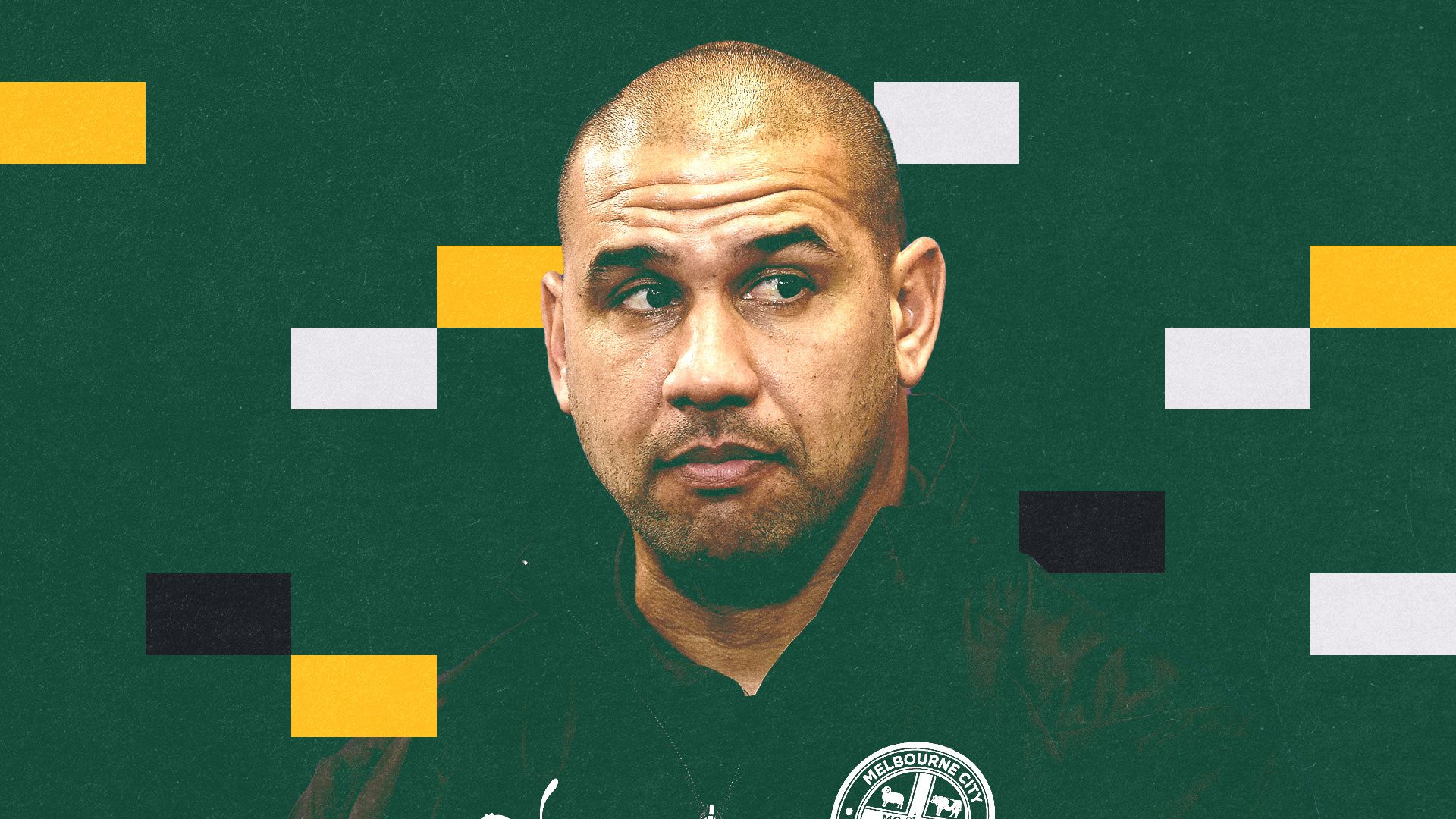 Paddy Kisnorbo must have been taken back to winning promotion from League One with Leeds United after guiding Melbourne City to the club’s first A-League trophy. Melbourne beat Central Coast 1-0 in May 2021 to finish top of the division, securing the competition’s Premier Plate before heading into the play-off finals series. Just like that famous day against Bristol Rovers, Paddy was on crutches with a ruptured Achilles, suffering the same injury that ended his 2009/10 season, this time in a charity match. Completing the League One vibe, Melbourne’s celebrations were delayed while Kisnorbo had his head stitched back together. His players had tried tipping the remnants of an ice cooler over their manager, only to forget to hold on to the lid and let it crack him on the bonce.

City followed their league success by beating Sydney FC in the Grand Final, completing the double in Kisnorbo’s first season as head coach. ‘Patrick Kisnorbo might just be Melbourne City’s first-ever true club legend,’ wrote the Talking City website. The Grand Final triumph added to three years as a player, first for Melbourne Heart, becoming captain of the club upon their takeover by the City Football Group. Since retiring as a player in 2016, he has worked as an assistant coach for their academy, women’s, and men’s teams, earning promotions to the top job for both the women’s and men’s sides.

Coaching the women’s team was made much easier by Wales great Jess Fishlock (119 caps and counting). When Kisnorbo was appointed assistant manager, Fishlock was both star player and head coach, good enough to manage the team to the Grand Final and score the opener in a 2-0 win over Perth Glory, claiming Player of the Match. When Fishlock returned on loan the following season, they swapped roles, but the result was the same: a 2-0 Grand Final triumph with Fishlock scoring the opener and winning Player of the Match, only this time the opponents were Sydney FC.

Two years as the assistant for the men’s side followed for Kisnorbo, first under former Scum coach Warren Joyce, then veteran ex-PSG boss Erick Mombaerts, who took City to second in the league and runners-up in the Grand Final. Kisnorbo says Mombaerts is the most knowledgeable manager he has encountered in terms of tactics, but he still has a soft spot for Simon Grayson. “He knew how to man-manage the group and we played a certain way and it worked really well,” he said.

Since becoming a coach, Kisnorbo has felt the need to distance himself from his reputation as a player, but he’s still the same Paddy we all loved. When Kisnorbo replaced Mombaerts as City’s head coach, director of football Michael Petrillo said, “He’s a lot louder than Erick… Erick’s more quietly spoken with a calm demeanour, Patrick is a bit more outgoing and likes to get stuck in at times.” After his side collected two red cards in his opening two matches as boss, Kisnorbo refused to be critical of his team’s physicality. “I am not going to stop players from doing what they naturally do, and that’s be competitors,” he said. “It’s part and parcel of the game, you just hope referees see your way. It’s not me, and it’s not the players.”

Kisnorbo might occasionally ask himself what Grayson would do in certain situations, but dare I say it, there’s a streak of Marcelo Bielsa in him. Like Bielsa, Paddy has taken inspiration from Arrigo Sacchi’s Milan team. He talks about prioritising performances over results, refusing to panic in defeat or get carried away in victory. Five games into a six-match winning streak in March 2021, Kisnorbo said he had no interest in records and the team still had things to improve. When asked in the same press conference to comment on the form of striker Jamie Maclaren, who has won three consecutive A-League Golden Boots, Kisnorbo praised the collective instead. A frustrated reporter ended the presser by asking Paddy if there was anything that makes him happy. Kisnorbo smiled. “Not a lot. Probably my mum’s pasta.”

Half-Italian, half-Mauritian, Kisnorbo also shares Bielsa’s unconventional approach to language and communication. While still working as assistant, he described how he spoke to the players in training:

“There’s no such thing as PK language but people understand it. Even though we’re all from different walks of life, they understand how I speak and it’s crazy.

“Even the coach [Mombaerts] starts using the words sometimes in training, which is funny.”

The elephant in the room is that Kisnorbo’s success as a coach and manager has come under the umbrella of the City Football Group and the riches of Abu Dhabi. Melbourne City are indeed the wealthiest club in the A-League, but in a salary-capped competition that doesn’t mean they can fill their squad with £50m players like Pep Guardiola. Instead, they have benefited from investment into their infrastructure, coaching, scouting, and medical departments.

Kisnorbo was able to spend time shadowing Patrick Vieira at New York City during his apprenticeship, but then he was also sent a good luck message from Noel Gallagher before one of Melbourne’s Grand Final appearances, so there are pros and cons. It is a far cry from the Melbourne Heart club Kisnorbo joined as a player, when the doctor’s office faced the gents’ toilets, which was missing its door. Players receiving treatment got a full view of their teammates going about their business, and it wasn’t uncommon to find snakes in the dressing room. It was nothing new for Kisnorbo, given he was at Leeds when Ken Bates’ sporting director, Gwyn Williams, was hiding in the toilets eavesdropping on Simon Grayson.

With the advantages of being part of the City Football Group come expectations and pressure from supporters. In his second season as boss, Melbourne finished top of the A-League but were unable to become the first team to win consecutive doubles, losing in the Grand Final to a Western United side featuring Paddy’s former Leeds teammate Neil Kilkenny. In the club’s maiden appearance in the AFC Champions League, City became the first Australian team to go unbeaten in the group stage, but were knocked out as runners-up. Their twelve points should have been enough to qualify as one of the three best second-placed clubs, only for a mid-competition rule change to dictate results against fourth-placed teams didn’t count. Shanghai Port had withdrawn, leaving one group with only three teams, but that wasn’t Kisnorbo’s fault.

The sky blue half of Melbourne have become authentic City fans. They may support the richest team in the country and enjoyed winning three trophies in the last two seasons, but they still want more. There’s a thread on their forum titled ‘#Sack Paddy’, with Kisnorbo criticised for not having a plan B, tiring players out by refusing to rotate the squad, and either not bringing on subs or bringing on the wrong subs rather than the young players fans want to see. Again, remind you of anyone? The same forum also excitedly compared his signing as a player to bringing in someone of the calibre of Hayden Foxe, so it goes to show people talk a lot of shit online (*raises hand, waving*).

One poster more recently asked on the ‘#Sack Paddy’ thread: ‘My question (particularly for those who think PK is doing a good job) is what are the things that have improved under PK, from where Mombaerts left us?’

I like to think it was a Leeds fan who quickly answered: ‘The trophy cabinet?’

Even if trophies aren’t good enough for those ungrateful Melbourne City fans, Kisnorbo has given them the chance to relish what football is really about: laughing in the face of your nearest rivals.

In March 2021, City went to Melbourne Victory and embarrassed them by winning 6-0 in front of their own fans. Victory manager Grant Brebner, a former Scum academy player, refused to quit.

Brebner had a chance to get revenge on Kisnorbo when the two sides met in the derby again a month later. City won 7-0, Jamie Maclean making up for missing a penalty in the previous encounter by scoring five of City’s seven goals. Brebner was sacked, leaving his assistant and former Blackburn manager Steve Kean in interim charge. LOL!

Relatively recently retired as a player, Kisnorbo has been praised for his personable touch with his squad, particularly the younger players, and being able to relate to their problems. I do worry what would happen to Archie Gray’s arm if he was given a high five as hard as this before a game, though:

CAN WE GET HIM OUT OF THE CITY GROUP?

If we can get Jesse Marsch out of the clutches of Red Bull and Austria, we’re only a few letters away from getting Paddy out of Australia. He’s even got some wings without having to drink any Fizzy Taurine. ⬢