The year is 1974, the subject is the World Cup, and the origins of the dispute are obscure, but here’s Jack Charlton, dressing splendidly in a bright yellow shirt and a pale green sweater, engaged in a bitter argument with Derek Dougan, the Wolverhampton Wanderers striker, and half of the ITV Sport production staff.

In question is a tackle in one of the World Cup games they’ve been watching, that Dougan regards as an outrage to common decency. Jack Charlton, as might be expected of a Leeds United player, is therefore all for it, and won’t hear otherwise. 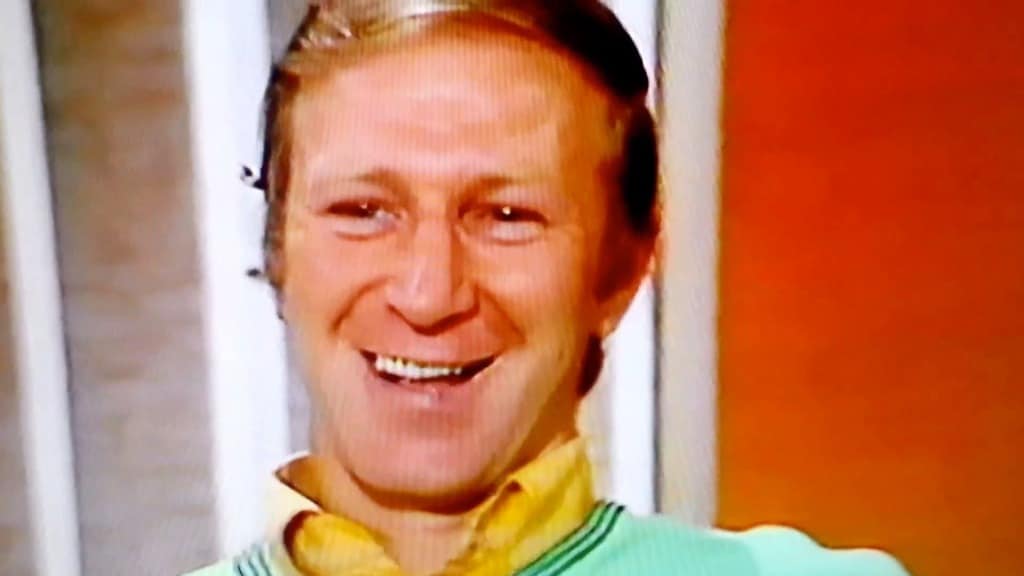 Charlton was a consummate pro, especially when it came to hard tackles, and he clearly regards Dougan as an amateur in this expert field. Dougan is a forward, so he only ever gets kicked; what does he know about kicking? Charlton’s head hits the desk: he can’t believe what he’s hearing. “There’s no one in the world,” insists Jack, “Watching that, can say he didn’t go for the ball.”

If he wouldn’t listen to Dougan, he certainly wouldn’t listen to the jury Dougan kept trying to draw in to judge the case. “I happened to talk to about half a dozen fellas on the floor,” Dougan says, indicating the production staff behind the cameras. “They agreed with me.”

At first Charlton seems not to want to cause offence, but then again, this is his professional judgement being called into question. “I want to hear the views of the professionals on the panel,” he says. Brian Clough and Bobby Moncur are sitting either side of the quarrelling pair, not sure whether to get involved. “Not the lads behind the cameras, the professionals,” continues Jack. “They’re amateurs! They’re cameramen, they’re not footballers.”

Brian Moore, the host, anxious lest this boil over into actual thrown punches, between Charlton and Dougan if not between Charlton and an insulted camera crew, reaches into the depths of his famous planetarium for a solution. All that’s inside his head, though, is a notion that would hardly have pleased Charlton: put the question out to a vote, and let the viewing public send in postcards, indicating whether they agree with Derek or they agree with Jack. Charlton had been calling for a jury of his peers; instead he got an even larger field of amateurs.

Then, on the next programme, he saw the results. Whether motivated by fear — if their postcards included return addresses, it would be unwise to contradict Charlton while letting him know where you lived — or a genuine support of his views, Jack won by a landslide, polling an astonishing 78%. Derek Dougan pretended to take his defeat with grace, but let his hurt feelings show by muttering something about the general election in 1970 that had Charlton exploding with laughter.

Jackie’s face as the results are announced is a picture. You could paint it, frame it, take it to the National Portrait Gallery, and have it hang there forever above the legend: ‘Face of a Winner.’ He’s beaming, sitting back in his chair, his eyes flashing like fireworks on VE Day, his fingers going to his lips as if he can already taste the celebratory cigar he’ll smoke later while savouring his victory. Jackie Charlton wins again. The feeling never gets old.

It’s a small victory, but to a winner that doesn’t matter. Jack Charlton was a winner, all the time. In Charlton’s day, Leeds United had a reputation better suited to a team from the local Working Mens’ Club games room than to a squad of elite professionals, but they were winners, and that was part of the reason why. Their counterparts at Chelsea or Manchester United spent their days off opening boutiques or sleeping off nightclubs, but Leeds United’s players gave up hours to bingo and carpet bowls, bizarre behaviour even in the 1970s. Imagine having all the fast cars and dolly birds in West Yorkshire at your disposal, and choosing to spend your days in a smoke filled room, rolling balls along the floor with Norman Hunter. Don’t you see enough of Norman at weekends? Why not have some fun with your time off?

Georgie Best would never understand. Georgie Best was addicted to the finer things life had to offer, champagne, women, clothes, fame, so that was how he filled his days. And that’s why he wouldn’t have lasted five minutes in a team with Paul Reaney, let alone on a pitch against him. Paul Reaney, Norman Hunter, Jack Charlton and the rest had their own addiction, that carpet bowls and dominoes satisfied: they were addicted to winning.

Looking back, that might have been as damaging to Leeds United’s health as the booze was to Best’s. There was a compulsive element to United’s pursuit of victory under Don Revie that a therapist might have heeded as a warning. First they won the League Cup, then before so very long the Inter-Cities champions were really going strong. In 1969 they won the First Division for the first time, and Revie’s reaction was telling: now, they would try to win everything, League Championship, League Cup, FA Cup and European Cup, all in one season. Not forgetting the Charity Shield and the West Riding Senior Cup.

They’d won once. Now they had to win again. Winning was everything to Leeds United, and Leeds United wanted to win everything. But like gamblers going all in with their winnings, after a bright start earned Leeds the Charity Shield against Manchester City, they ended the season by losing everything. Even the West Riding Senior Cup.

I can’t begin to imagine what the hangover was like, but for Leeds United, and Jack Charlton, by 1970 the hangovers from long seasons spent in pursuit of the winning feeling were coming with the territory. Opposite the picture of a winner we just took to the National Portrait Gallery ought to hang an image of Charlton after losing the FA Cup Final to Liverpool or Chelsea. They were two sides of the same player, and one stared deeply into the other.

Jack Charlton had spent ten years as a First Division also-ran and a Second Division failure before winning the World Cup in 1966: his first major honour was the biggest there was. He’d spent more time losing at football than he had winning at it, but when he won, he won big, and those were the two pillars of his drive. He didn’t want to go back to the days when he was a loser, so he seized any opportunity he could to win and gave it his all. Whether it was the FA Cup, the World Cup, or getting one over on Derek Dougan in a TV studio, any win was worth it, because Jack Charlton knew what it was like to lose.

“You get nowt for being second,” said Charlton’s roommate, confidante and captain, Billy Bremner. That wasn’t strictly true. If it was a cup final, you got a medal, but that Bremner counted such medals as ‘nowt’ tells you all you need to know about those pieces of tin. That was just what people gave you as a nice way of saying you were a loser.

Being second wasn’t about what they gave you, but about what you took. In Bremner and Charlton’s case, every time they lost, they took an even greater determination to win, building a bonfire with their defeats, forming a great pyre that, when lit with victory, sent its message blazing like a beacon from the north: Do Not Fuck With Us, For We Will Win In The End.

Jack Charlton and Billy Bremner lost a lot of games. Of football, of carpet bowls, of dominoes. Every season when the Football League or UEFA cheated them, or every week when Norman Hunter toppled the pins and collected his winnings, it reminded them how much they hated losing. It made them winners.

Thomas Christiansen won the league last season. You might say it was only Cyprus, but then you might as well go back to 1974 and tell Big Jack that it’s only Derek Dougan. Christiansen also took APOEL into the last sixteen of the Europa League, beating Olympiakos and Athletic Bilbao along the way, before presiding over a stellar start to the season at Leeds United. Now he’s having a hard time with losing, sharing the defeats with new players who can’t have fully grasped their new situations yet, and players who have been around longer, such as Kalvin Phillips, who are like Jack Charlton in the wilderness: they don’t yet truly know what it is to win.

Leeds United need to take the downcast faces that trudged from the fields of Bermondsey and Cardiff these last two weeks, and place upon them the sardonic expression of champions, Jack Charlton’s winner’s grin of 1974. They’ll get there by winning, by thumping Burton and toppling Burnley. But it’s important to remember that they’ll get there by losing, too.

Every team of true winners has to know how it feels to lose. That’s what made those games of carpet bowls so important. George Best and his pals lived the lives of winners in nightclubs and private bars, but in the fierce contests of nerve and skill at Leeds United’s team hotels, every day declared a new winner and, just as importantly, ten new losers, determined to seize victory the next chance they got.

That’s how you make winners. ◉