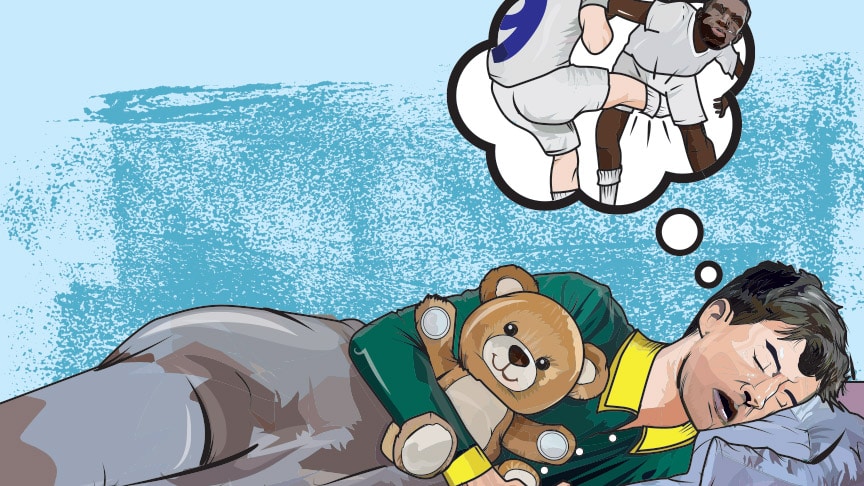 A spotlight clicks on, revealing a telephone, jet black and plastic. The receiver shudders in its cradle. Ring, ring. You reach out a hand to answer and it stops. You hear yourself swallow. Ring ring, ring ring, the cruel machine begins again. You’re quicker to react this time, but the moment you move, it stops mid-ring, like the halting of conversation when you walk into a room where everyone’s talking about you. You try to catch it off guard, feigning removing your hand before lunging forth once more. It doesn’t even draw breath.

The telephone suddenly wails. ‘Ha-ha!’ you cry triumphantly as you seize the receiver. ‘Hello?’ you say. Ring ring, ring ring. Your hand is empty. You grab the receiver again, but it’s stuck. You grimace with the effort but it holds firm. Ring ring, ring ring. The coiled wire giggles like a snake mocking your incompetence. You smack the device repeatedly, bruising your palms as they collide with its hard, shiny shell. Indifferent to the assault, the phone’s piercing bleat continues. You scramble to find a connection at the back. Locating a wire, you follow it to the floor and out of the spotlight. It’s dark, but you can feel it between your fingers, so are guided by touch. You hope you are being lead to salvation, as your ears are sore. Ring ring, ring ring.

You crawl towards a light in the distance and go through a tunnel, where you’re met with a different kind of noise. The crowd is deafening. There are laced boots on your feet and you’re not controlling them. You’re sprinting and your legs are taking you goalwards. A ball rolls perfectly into your path. It’s you and the keeper. But he’s not looking? He’s facing the stand with his back to you. Why isn’t he defending the goal? Turn around, you say as you run. You’re hurtling towards indifferent opposition. You’re shouting now, ‘look at me, look at me!’ The crowd are shouting too, willing you on. There’s nothing left to do but strike.

You go through the motions. Exhale, plant your left foot, arms out for balance, draw back your right leg. But your legs seize up completely and you can’t move. You look down: your torso is staked in the mud, not by your legs, but by two sleek, mahogany violin bows. Driving yourself towards the ball, you fall flat on your belly, face in the mud. Time moves slowly as the ball trickles goalwards. It’s on target. You can hear your breath, loud and dogged. ‘Please,’ you mutter. The keeper is still oblivious to the imminent danger, and you realise the cause of his calm, as the goal is rapidly shrinking. The ball is nearing the line but the posts are shifting closer and closer in, threatening to shut out your attempt all together. You scream, helpless, grasping the air in front of you. The goal stops shrinking at once, the post planted dead in the path of the ball. It rebounds gently, coming to rest just a nudge away from the goal-line.

Remembering the state of your legs, you dismiss any thoughts of getting up and begin the long hard slog towards the ball, hoiking yourself along with your elbows. You’re exhausted. You think you hear laughter far away. You ignore it. Then another sound, warped and distant. It grows, becoming clearer as you inch closer to the ball. ‘Eddie, Eddie, Eddie, Eddie.’ The noise crystallises into words that burn your ears. The ball is in your reach. With a final thrust of your head it rolls towards the target. A boot stands in its way, and the owner flicks the ball up into his hands. You look up to see the towering figure of Eddie Nketiah, leaning against the post, casually rolling the ball back and forth between his gloved hands, smirking. He joins in with the din. ‘Eddie, Eddie, Eddie.’

You shut your eyes and block your ears but you cannot shut it out. The memory of falling flat in the mud is stuck on a loop in your head. Your hybrid figure, half-man half-horsehair, on the edge of the box, stiff and failing. Is this what they call an ‘out-of-body experience’? You hear laughter again, faint and menacing. It grows louder and louder, until it’s so frightening and intense you tentatively open your senses again, desperate to discover its source.

You’re in the playground now. You look down and are relieved to see two fleshy, human legs, but you’re inexplicably dressed in the blazer and tie that once signified allegiance to your old school. The mocking laughter emanates from a group of boys. They are crowding round excitedly, all stretching to catch a glimpse of something happening in the middle of the circle. You strive to see for yourself but the object is obscured. ‘Excuse me,’ you say, politely, then again with more insistence. Your pleas go unanswered so you barge your way through, forcing your arm between shoulders to make inroads. The crowd is thick and you’re soon embedded in a swarm of boys with no clear way out. You are being pushed and hassled, limbs everywhere, and you fear you’ll die this way, drowning in a sea of Lynx and brogues.

Finally there’s an opening and you reach the inner-ring. They are crowded round a mobile phone, cackling and pointing mechanically, as if programmed to. You cackle too, then crane your neck to find out what you’re supposed to be laughing about. You see yourself on the screen, bows for legs, falling to the ground dramatically on repeat in an Instagram GIF. The laughter fades to silence and the phone’s owner, Head Boy Eddie Nketiah, starts chanting and pointing at you. ‘Bow-legged! Bow-legged! Bow-legged!’ It’s soon adopted by the whole crowd chiming in unison. You cringe. On impulse you snatch the iPhone out of his hands, and the chanting falls quiet. Hot tears swarm in your eyes and you look for a place to run, but you’re surrounded. No matter anyway, as your feet are glued to the spot.

Ring ring, ring ring. Oh sweet mercy. All eyes snap to your hands and the iPhone, chirping melodically. You stare at it and try to consider your options, but your mind has shut up shop. For a moment all is still but for the gentle vibrations, crawling up your arm. You will them to jumpstart your brain and kick your body into action but all you can do is look at the impatient device. Your legs start to quiver. Someone sighs. A hand reaches out, cool as you like, and takes the phone from you.

‘Hello? Yeah, I’ll be there,’ Eddie croons. The crowd cheers as he calls off and slides the phone into his back pocket. ‘Stand back everybody,’ he commands, and the boys around him murmur excitedly as they obey. All around him, leaves climb off the ground as a gust passes through the school courtyard. Eddie spins like a corkscrew, accelerating and rising into the air to gasps from the crowd, their hair flying with the force of his manoeuvre. He stops abruptly, and lands in a crouching position. Shedding his uniform, he is dressed head to toe in Leeds United’s home kit. He sprints away to reveal not his name but ‘Starting’ printed on the back of his shirt, atop the number 11.

‘Full kit wanker!’ someone shouts after him. Everyone turns and looks at you, and Eddie slows to a jog, wheeling round to face you again. You stand, mouth agape. Shit.

‘What did you say?’ he asks, with a voice of steel. You panic. When you fail to respond, he speaks again, but you can only try to make out words from his moving lips as, inside your head, alarms sound persistently. Composure, you tell yourself. You count to five, slowly, feeling the eyes of your peers burning on your skin.
‘Look, over there, a through ball,’ your voice cracks as you attempt to create a distraction.

‘I ain’t falling for that, come on,’ he scoffs.

Inspiration strikes. You trill ‘ring ring, ring ring’, moving your mouth as little as possible. Eddie makes a sound expressing pleasant surprise, and reaches behind him to retrieve the phone. This is your moment, and you seize it without hesitation. You exhale, plant your left foot, arms out for balance, draw back your right leg: GOOOOOOOOOAAAAL!

You strike clean between Eddie’s legs, foot making sweet contact with testicle, eliciting a high-pitched groan as he crumbles in a heap on the floor. You hear cheering, this time a deep-throated roar, and you are suddenly among men. Fans flock towards you, clawing at you in jubilant celebration. A fist scrubs your head and you wriggle away, arms aloft. You stand erect over Eddie’s cowering body, casting a shadow across his face, streaked with tears. He shuffles towards you and kisses your boots. You feel joy.

The screeching of an alarm pulls Patrick Bamford into the present. He switches it off and sits up quickly. His pillow and bed clothes are moist. Morning light crawls under the curtain. His first waking thought is of his legs, which he grabs for reassurance. He is pleased to find no mud clinging to his silk pyjama bottoms, which are in fact beautifully laundered. Matchday, he remembers with excitement.

He picks his phone off the bedside table to find 312 unread messages from the squad WhatsApp group. He opens the app and tries to make sense of the banter, rapidly firing.

The_Nketiah: Nah man I’m not even joking 😭😭😭 wish I was
Klichy: So are they still attached to your body?
Harrison: some bird taking her revenge or wot lol
P_Hernandez: Will it be having affect on you giving a child? Pablo.
K-Phipz : That’s some deep shit bro 😂
El Loco: Get Well Soon, Edward.
Coopz: Aye my uncle’s had that when he were a lad. Tough as nails he is and said it proper hurt. What’s it called again?
The_Nketiah: testicular torsion, some nonsense like that.

Patrick drops his phone in his lap, stares intently into the half-darkness of his bedroom. ‘Well, fuck,’ he says softly to himself. ◉