This bereft athletics bowl is located in a rare part of the frantic metropolis that can be described as the middle of nowhere. It was left over from the 2012 London Olympics, and Leeds United’s now-CEO Angus Kinnear was employed overseeing West Ham’s move there. 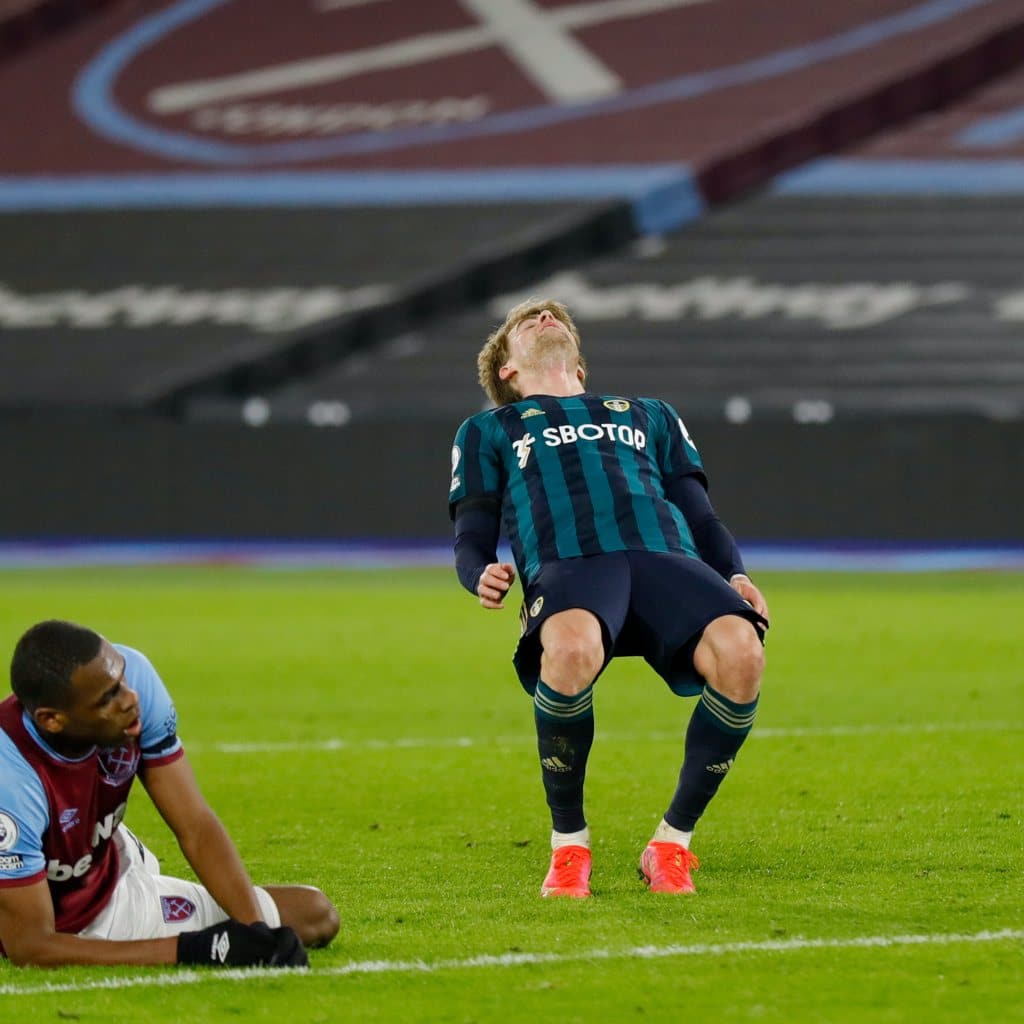 Like everywhere it is empty due to the pandemic, but unlike anywhere it’s hard to tell. The seats are so far from the game how would the players know if the crowd is in or out. Without fans West Ham expose the branding, London, London, London, without an East End West Ham devotee to give the place any veneer of being local. It’s just London, everywhere, as if everywhere is London, which everywhere emphatically is not, especially Leeds. Which is a relief, because then Leeds would never win at home either.

There’s no explanation confirming the existence of a London curse upon Leeds United, but you could say the same thing about God. They both exist, whether they’re real or not, in the minds of people. Sceptics can rationalise either away, almost, until they’re defied by the inexplicable. If God doesn’t exist, how do you explain miracles? But then, if God does exist, why won’t they grant Leeds a miracle win in London?

This defeat feels worse because it’s to the London Hammers, and they’re never supposed to be any good. Coming up from the Championship we all had our mental list of clubs Leeds couldn’t compete with. Liverpool and Manchester City are in a different league. Chelsea and Spurs are up there with resources and talent. Reluctantly, we have to respect the recent triumphs of our old League One peers Leicester — although we beat them. You can never tell with Arsenal. West Ham, though? Managed by David Moyes? We’ll beat them twice and finish above them, no problem.

Apparently not. That West Ham are good now, and have been since beating Leeds at Elland Road in December, doesn’t feel right or fair. Why couldn’t they get their act together when Sam Byram and Rob Snodgrass were there, so we could at least enjoy it vicariously? Why now, when they’re playing us?

It doesn’t look like it’ll last, either. West Ham are still built on impulse buys from the Championship — why is Jarrod Bowen on their bench, when he could be playing for us? And writing off their donkey striker Sébastien Haller in favour of Jesse Lingard on loan feels short-termist, like they’re going to decide on a new striker in the summer. Decisions aren’t always Davids Sullivan and Gold’s strong suit. Here’s how it will go: they’ll qualify for the Champions League, decide they can attract a higher calibre of player, spend their whole fortune on an overrated striker even worse than Haller, get knocked out of Europe in the first round and start fighting relegation. Moyes is looking confident lately, loquacious with the press, a sure sign that he’s heading for a fall.

It didn’t come soon enough for Leeds. I’m generally avoiding the subject of the game because it didn’t add much to our sum of knowledge about Leeds United this season. Luke Ayling’s silly challenge when Lingard was dribbling into the box gave away a penalty, Illan Meslier was unlucky that his save put the ball in front of Lingard to score the rebound, Diego Llorente, who says he spent his time injured watching how his new team play, proved he’s learned how not to defend corners, and Craig Dawson headed one in. For a while West Ham were sensing more goals, but in the second half Leeds reasserted themselves. It was too late against West Ham’s solid rearguard.

We’ve seen it all before, how Stuart Dallas’ strenuous effort and Raphinha’s skills can’t always overcome teams defending with eight back. Although, when Leeds did break through, we saw some new and unusual ways of screwing good chances up. Pat Bamford did everything right with Llorente’s through ball but planted his shot just wide; then he did everything wrong twice in ten seconds, the sort of fluffs players get rugby tackled for in training but can only look ashamed of in games. When Rodrigo turned into Luke Varney with the ball at his feet on the goal line, somehow kicking it square and off their defender, it really felt like all that in-stadium London branding was getting in United’s eyes.

But they’d started so well, netting twice in the first ten minutes. Netting, rather than scoring, a sure sign VAR was involved. For the first, Bamford flicked on to Helder Costa, who set up Tyler Roberts to finish. A long wait and some MSPaint later, the edge of Costa’s knee was deemed offside.

In my post-match mood, this might as well be the moment to forget everything else and curse VAR and everyone who let football get to this joyless point, where game after game is being sucked into oblivion, standing still while laboriously forensic investigations are carried out to determine precisely things that nobody who loves football cares about. Thirty years and more of half-arsed attempts at ‘fixing’ refereeing have taken us so far away from the original point that the only salvation I can see is starting again. 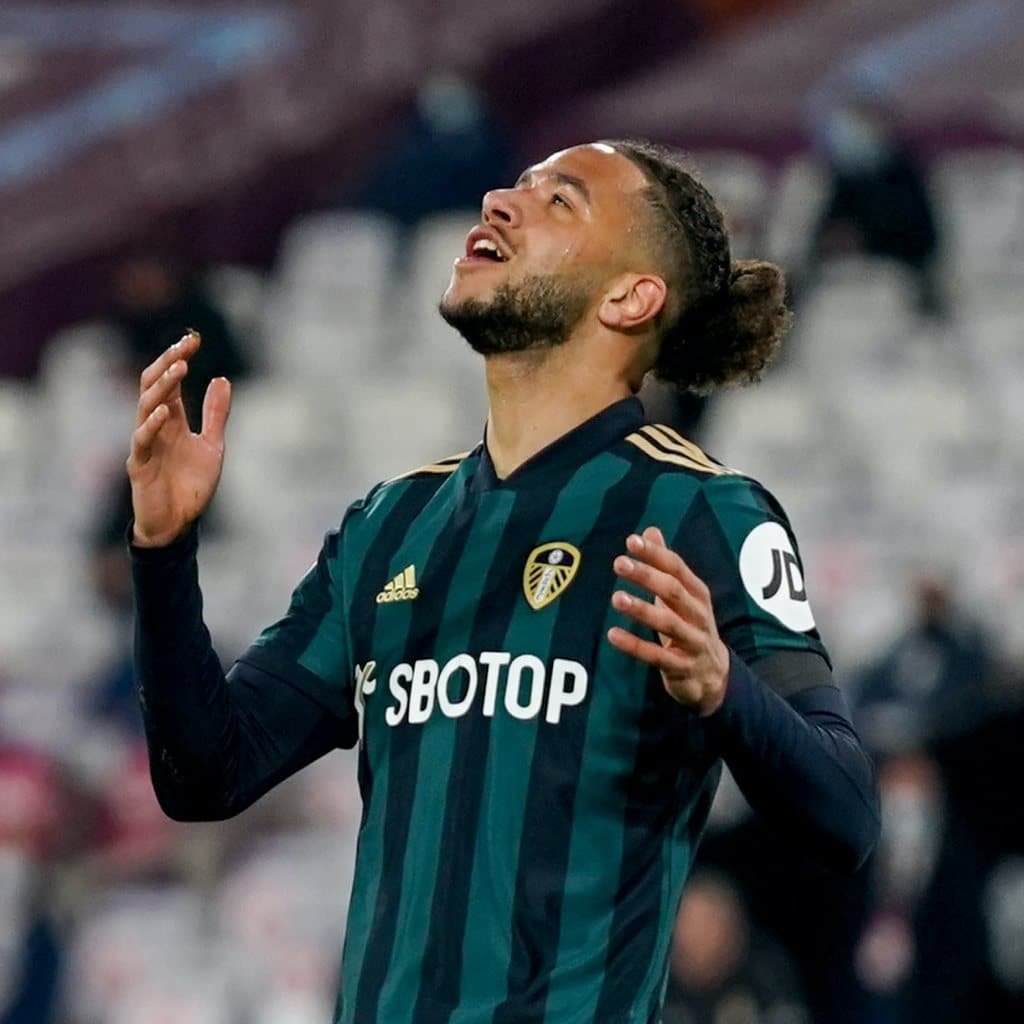 Ending the career of Neil Warnock would be a fringe benefit. He was complaining at the weekend, again, that referees aren’t good enough, in a division that doesn’t even suffer VAR. He bemoans the lack of communication with referees, when what he means is, they’re still not perfect even after he’s spent forty years screaming obscenities at them and, on Saturday, implying they’re in league with the opposing manager’s dad. That’s professional development, Warnock style.

Refs don’t need telling when they’re wrong, not with Warnock’s vocabulary. They know. They review games themselves, discuss and correct mistakes. What they need is an environment that allows them to go through that process in peace. Eradicating dissent won’t result in perfect decisions — referees will continue making frustrating mistakes, like goalkeepers do. But it would extend to refs the relatively patient understanding goalies get, reestablishing them as colleagues in the game trying to do their best, rather than enemies of the players, staff and fans, out to destroy everybody’s fun.

Decisions can be respected when they’re made in good faith, even if at first that respect has to be enforced. One of the drawbacks of VAR is that its implementation is so laughable it can’t be respected. Referees need to be put back in charge, with responsibility for mistakes in an atmosphere of respect rather than rancour.

It would also help to reset and reapply VAR to rules that makes sense. I defer to Marcelo Bielsa on this, who correctly identified VAR’s key problem back in October. “In the search for perfection,” he said, “you know where it starts, but you never know where it ends.”

In this case, the search for perfect offside calls has ended with pixel lines being drawn across knees while ignoring the imprecise sync with when the ball was struck; we’re measuring one side of the screen with lasers and the other with an IKEA paper tape measure. The truth is, we don’t need to measure anything down to the pixel at all.

“I think if the rules were simple,” said Bielsa, “and they were closer to the perception of humans, everybody would be grateful … To simplify, for me, it would be great if when there’s a handball everyone agrees it’s a handball, or if it’s offside, everyone knows it’s offside.”

There’s the answer. If it looks offside to one person, but onside to another, and measuring to the pixel can’t confirm it, you’re looking at the wrong thing. Right now, it’s too difficult for assistant referees to call offside in real time, because they’re being asked to judge it to the millimetre edge of a knee. It’s impossible. So change the rule so offside can be judged in real time, or next best, so that it can be instantly spotted by technology. That could be visible daylight between players, or the position of feet, with a margin of error in favour of the attacker. But the key is making the test for offside so simple that either real-time, one ten second replay or automatic technology are enough to make a decision everyone can accept and respect, even if mistakes are sometimes made.

That has always supposedly been the target of VAR: to stop arguments. The idea was to keep players and managers from crowding round refs and bellowing in their faces, when they should be playing an entertaining game of football. Well, to stop dissent, you enforce the rules about dissent. You don’t create more excuses for controversy by complicating the offside rule until it has become abstract nonsense.

Unless, deep down, we don’t want to stop dissent at all. Maybe controversy is what people want, incidents, news, the tea, the 411. Is football a competitive game of skill, or a framework for newsworthy talking points everyone pretends they don’t want to be talking about? VAR is only taking it in one direction. ◉