Leeds United had just finished their best European campaign in recent memory. Since spending £18m on Rio Ferdinand, their Premier League form had been worthy of a title. Robbie Keane’s £12m transfer was confirmed in the summer, giving Leeds one of the most formidable attacks in the country. Morale was high; the papers were lapping up photos of Ian Harte driving a yellow Reliant Robin after being elected the week’s worst trainer. The Premiership had a new look on a new channel, Des Lynam hosting the primetime highlights at 7pm on ITV with Andy Townsend in a Tactics Truck, and Leeds were tipped to be champions. A UEFA Cup adventure offered another route to glory, and Peter Ridsdale was speaking confidently about the future, and building a brand new stadium ‘for free’ with sponsors’ money.

So what was up with them? 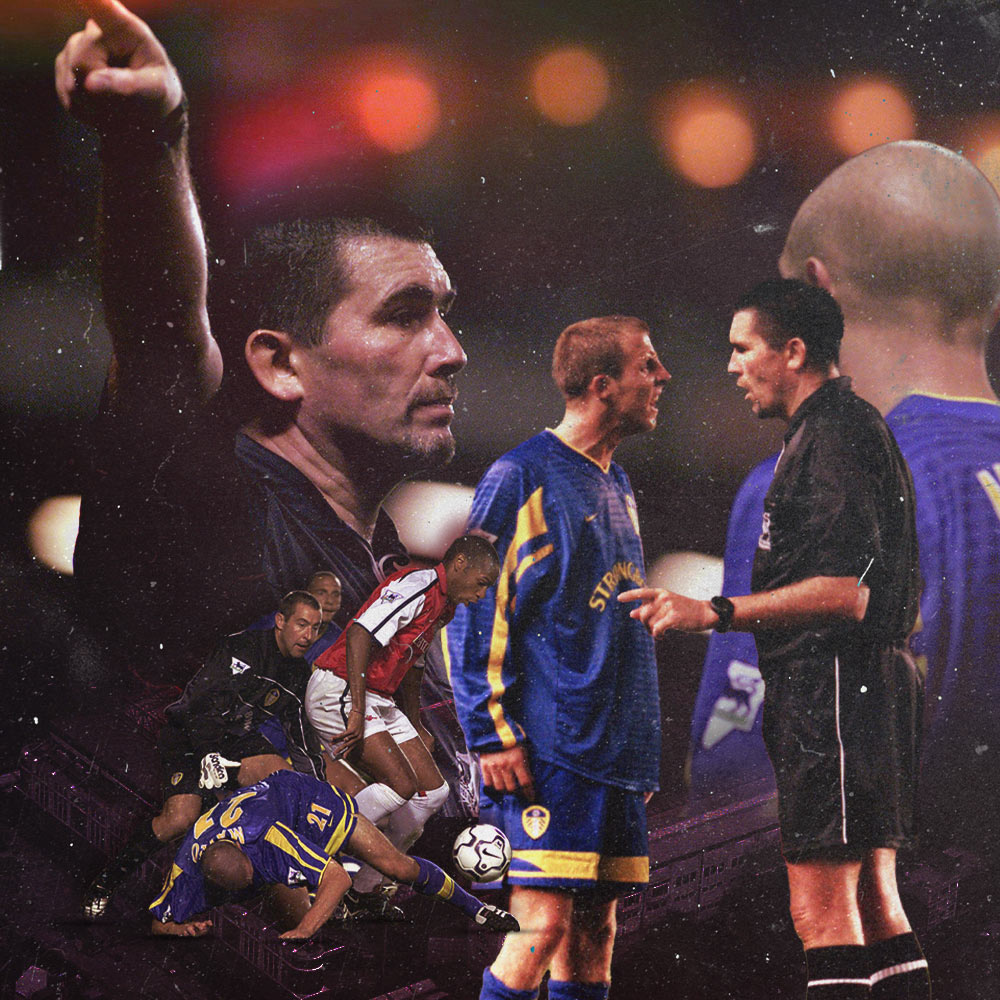 Southampton were beaten on the opening day at Elland Road, although it took a brave strike from Lee Bowyer and a supersub appearance from Alan Smith, replacing Keane, to raise the game from its dull grind. A win was a win, but the performance underwhelmed fans who had come flocking to Elland Road to see David O’Leary and Eddie Gray’s vivacious young team bringing in the new millennium. In 2001 a bench reshuffle brought Brian Kidd closer to O’Leary, and with him the idea that the babies now had to grow up, prove the worth of the investment made in them, and win something.

At Highbury, they looked like a bunch of moody teenagers, and not only on the pitch.

“Tackle one,” said Andy Gray, commentating on Sky. “23 seconds in.” Mark Viduka had hit Robert Pires with a late foul, and the tone was set, if history hadn’t already done that. Working backwards, the bookings count was 4-3 to the home team in Arsenal’s 2-1 win at Highbury in May; Martin Keown was still awaiting an FA hearing about elbowing Mark Viduka in that one. When Leeds had won 1-0 at Elland Road, Arsenal took the yellow honours, 7-1, plus an FA charge against Patrick Vieira for kicking Olivier Dacourt in the throat as he fell in a tackle, and O’Leary’s complaint that Robert Pires had called him a ‘whore’. In April 2000, in Leeds’ 4-0 defeat at Elland Road, Harte was sent off before half-time; in December 1999 Arsenal won 2-0 at Highbury but lost 4-3 on bookings; and on the famous night in May 1999 when Jimmy Hasselbaink denied Arsenal a title in the 86th minute, the yellow cards ended Leeds 4-5 Arsenal. That had origins in the previous December’s game at Highbury, when Gilles Grimandi was sent off for headbutting Smith in a 3-1 Arsenal win.

The fixture was a powder keg filled with fireworks wired up to a detonator in the hands of a toddler. Or Danny Mills, who pushed Ashley Cole over for no reason as he took a throw-in in the fifth minute. Leeds seemed determined to play the occasion and push referee Jeff Winter as far as they could, a cliff edge they reached in the seventh minute, when Eirik Bakke was booked for a foul on Ray Parlour. Two minutes later Dacourt was booked for his second late foul on Vieira, three minutes after that Bowyer took a yellow for going in late on Lauren, and four minutes after that Mills had an overdue card for going over the top on Freddie Ljungberg. Leeds had picked up four bookings in ten minutes and Mills kept trying his luck, trampling over Thierry Henry.

Arsene Wenger’s squad never hid their dislike of Leeds United’s players, but here they seemed more bemused than angry about the self-destructive way their blue-shirted enemies were kicking themselves into trouble. The general confusion allowed Leeds the lead, though. Nobody was sure which of two fouls Winter had given Leeds a free-kick for, but while that was being discussed, Harte put the ball down and curled it around David Seaman’s disorganised wall. If ever a goal was calculated to piss Arsenal off, this was it.

Arsenal were playing the better football and equalised four minutes later. Running into space Mills had left, Cole’s shot then deflected off the right-back and was headed in by the very alert Sylvain Wiltord. Leeds were being forced backwards, counter-attacking when they could, not helped when Smith succumbed to an ankle injury he’d carried through the first half. A minute into the second David Batty replaced him, Leeds matching up against Arsenal’s midfield and leaving Viduka upfront on his own.

That was fine by him. Harry Kewell gave him the ball and, without anyone’s help, Viduka dribbled away from Tony Adams, making the defender look very old. Sol Campbell, making his debut, was nowhere to be seen. From the edge of the area Viduka’s shot cracked into the bottom corner and Leeds had the lead back.

United now set in to repel Pires’ pace and Dennis Bergkamp’s smarts, brought on in place of Parlour; at one point it took four players to tackle him, but Leeds got it done. Beneath it all was the temperature; Henry fouled Mills, who refused to shake his hand of apology; Dacourt kept going for Vieira; Pires tried to start fights after Cole’s foul on Bowyer, rushing into Ferdinand’s face and shushing him, then shoving Mills to the ground while the ball was out of play. Nigel Martyn yelled at Lauren for diving and pleading for a penalty, and Viduka took a yellow card for bringing Pires down from behind.

That card, in the 75th minute, was United’s first since the 18th minute, and came just after Arsenal had gathered three in five minutes. It seemed to swing the frustration from Arsenal to Leeds. A fairly mild foul by Bowyer on Cole was one too many for Winter, who felt the battles on that wing had gone too far and showed Bowyer a second yellow. He was stunned into silence, but not for long, marching towards the referee and unleashing strong opinions with colourful illustrations.

Leeds were now forced into their defensive third and tackling died down as they let Arsenal have the ball in the middle of the pitch, searching in vain for substitute striker Francis Jeffers. But Mills couldn’t resist the drama. Cole stayed down after they’d contested a fifty-fifty, so Mills played a one-two off the Arsenal defender’s backside that brought Winter rushing over with his second yellow. “What for?” pleaded Mills; ungentlemanly conduct was the answer, and it was the tightrope he’d been walking since pushing Cole over an hour and a half earlier.

Wenger was now frantic, arguing with everybody as Leeds dithered over substitutions, protesting when Dacourt stayed down after a tackle; the only people enjoying themselves were David Batty, who seemed to find the whole situation hilarious, and the Leeds fans, who cheered every defensive block with an ‘Olé’ as if stopping Arsenal’s shots was a rhythmic passing move. Leeds didn’t have anyone in Arsenal’s half, so whenever Martyn cleared, he was giving the ball to Seaman and his defence time to reorganise, while willing the clock through five minutes of stoppage time.

One person who didn’t look to be enjoying himself was David O’Leary. While Brian Kidd barked instructions, Eddie Gray gave orders to the subs, and his staff argued with Wenger, Leeds’ manager sat slumped on his bench, his arms folded, gazing towards the pitch but not at the action. The game was concluding with tussle, effort and excitement, United’s players battling to the last as they secured O’Leary’s first win as manager at the club he’d represented for so long as a player. But while it all went on around him, he looked as sulky as a grounded teenager on Saturday night.

“Our spirit and togetherness got us through,” O’Leary said at the end. “It’s a fantastic three points. I’m not a cautious person but I would have taken a draw before the game.”

How a point at Highbury would have helped O’Leary’s stated ambition to win the title that season wasn’t clear. Why Leeds, with the attacking talents of Viduka, Kewell and Keane available and the world’s most expensive defender at the back were starting the new season by adopting the scrapping tactics of 1980s Wimbledon wasn’t obvious either. Nor why O’Leary, who used to greet wins like this by striding onto the pitch, all smiles, embracing his players and taking the applause, was now sullen in a back seat on the touchline. But the Premier League table didn’t lie. By the end of the week other sides still had games in hand, but Manchester United, Arsenal and Spurs had already dropped points. Only Bolton and Leeds had two wins from two. ◉